Calling them 'political prisoners,' a small crowd gathered in Boise to protest last week's FBI arrests of Bundy defenders in the wake of the Malheur standoff.

Angered by the arrests of four of their fellow antigovernment “Patriots” by the FBI last week, a collection of several dozen protesters gathered on the steps of the Idaho Statehouse in Boise on Friday to demand freedom for their comrades in arms. 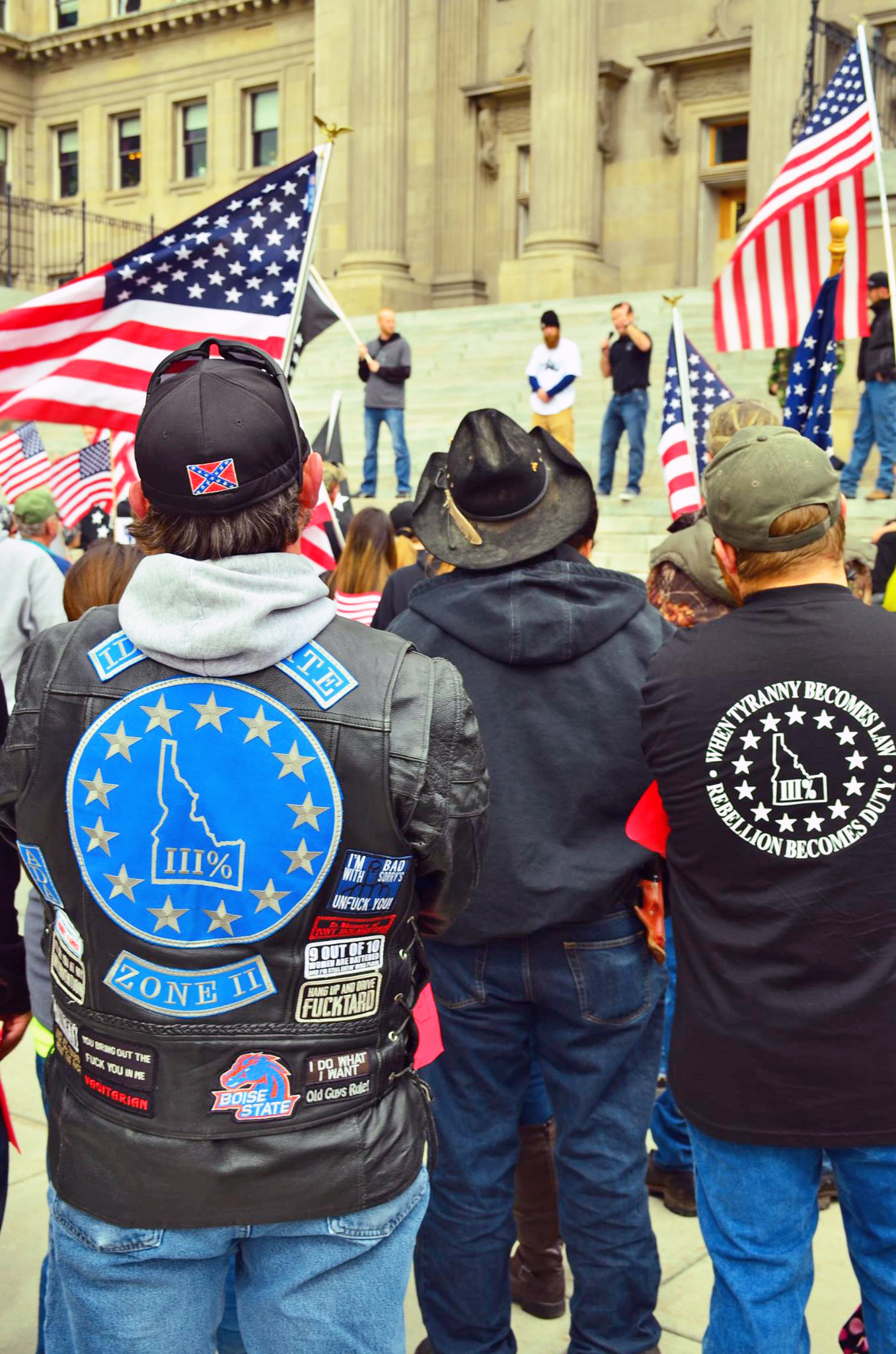 "3 Percenters' from around the state made their presence known. Photo by 43rd State Blues.

Their signs largely voiced their message:

“III%: We Still Believe in the Constitution”

“Stand For the Constitution – Know Your Rights”

It was Parker, in particular, on the minds of the gathered “Patriots.” A 32-year-old electrician from Hailey, he was among the four Idahoans arrested last week in a nationwide sweep of suspects accused of crimes originating with the armed standoffs with federal agents and rancher Cliven Bundy and his sons and their defenders, first in Nevada in April 2014 and then in Oregon in January of this year.

Parker made a national name for himself by being photographed aiming a sniper rifle in the direction of the federal agents and other law enforcement officers who were attempting to execute a federal court order directing the Bureau of Land Management to round up Bundy’s cattle. He also appeared at one press conference with Ammon Bundy after the occupation of the Malheur National Wildlife Refuge began on Jan. 2.

Parker also was heavily active with “3 Percent of Idaho,” the antigovernment organization also involved in would-be federal standoffs in Oregon and Montana, as well as virulent anti-refugee protests in southern Idaho. Parker, the group’s vice president, appeared with several of the organization’s leaders at a number of its rallies and was heavily involved in its ventures into the Oregon and Montana situations.

Along with Parker, three others -- Steve Arthur Stewart, 36, of Hailey, O. Scott Drexler, 44, of Challis and Todd Engel, 48, of Boundary County -- were arrested on charges related to the Nevada standoff. Their defenders argued that all four were being held as “political prisoners.”

Speakers at Friday’s gathering insisted that Parker was acting in self-defense when he lay prone on the asphalt behind a jersey barrier on the overpass near the Bundy Ranch and trained his high-powered rifle on the law enforcement officers gathered at the scene of the standoff – an image celebrated in T-shirts that many of them wore. Another T-shirt read: “Redneck Lives Matter.”

The speakers included Brandon Curtiss, president of 3% of Idaho; B.J. Soper, president of Pacific Patriots Network, the militia organization that had been heavily involved in the Malheur standoff; and libertarian activist Ryan Davidson, who urged the crowd to change party affiliations and run for office. The others all urged the Idaho Legislature to intervene on behalf of the arrested men. 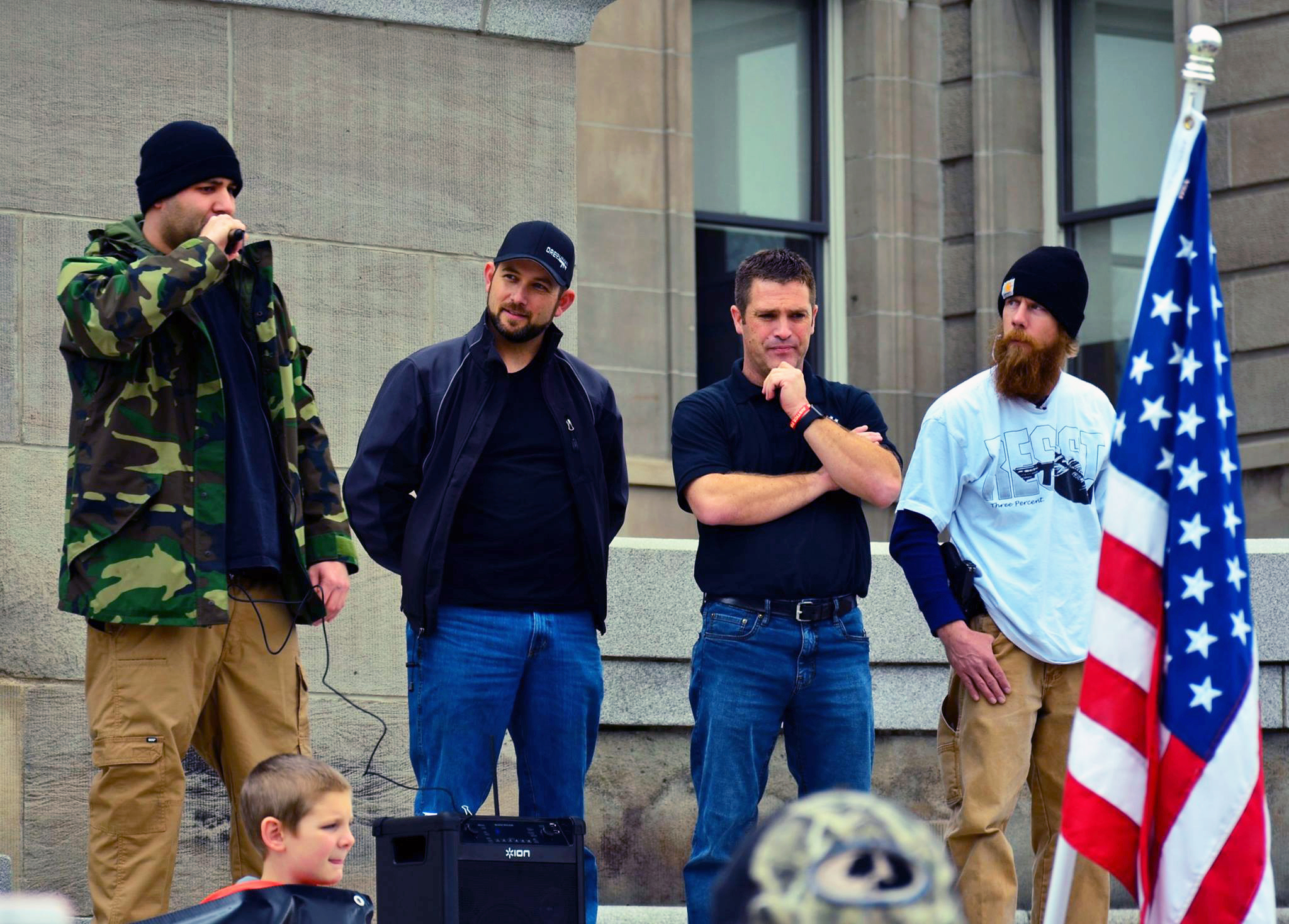 The event's anonymous organizer, '1776Revolutionist' (at left) spoke, along with B.J. Soper, second from left, and Brandon Curtiss, third from left. Photo by 43rd State Blues.

The event’s anonymous organizer, who identifies himself as “1776Revolutionist,” spoke to the crowd as well, donned in camo green. He ardently denied that the four men under arrest were “extremists,” adding: “Let’s go ahead and call them what they are: they’re political prisoners. They are in jail for their political beliefs. They are in jail because they are willing to stand up to the federal government.”

As the protesters prepared to wrap up, they heard a recording of a rewritten version of the popular hit from The Hunger Games, “The Hanging Tree,” recorded by the daughters of LaVoy Finicum, the “Patriot” martyr of the Malheur standoff:

Are you, are you

Just going to let it be

The ranchers are first

But brother next it may be me

We all stand together

Are you, are you

Going to the tree

When the song had finished, everyone retired to the Capitol Rotunda to sing the National Anthem. 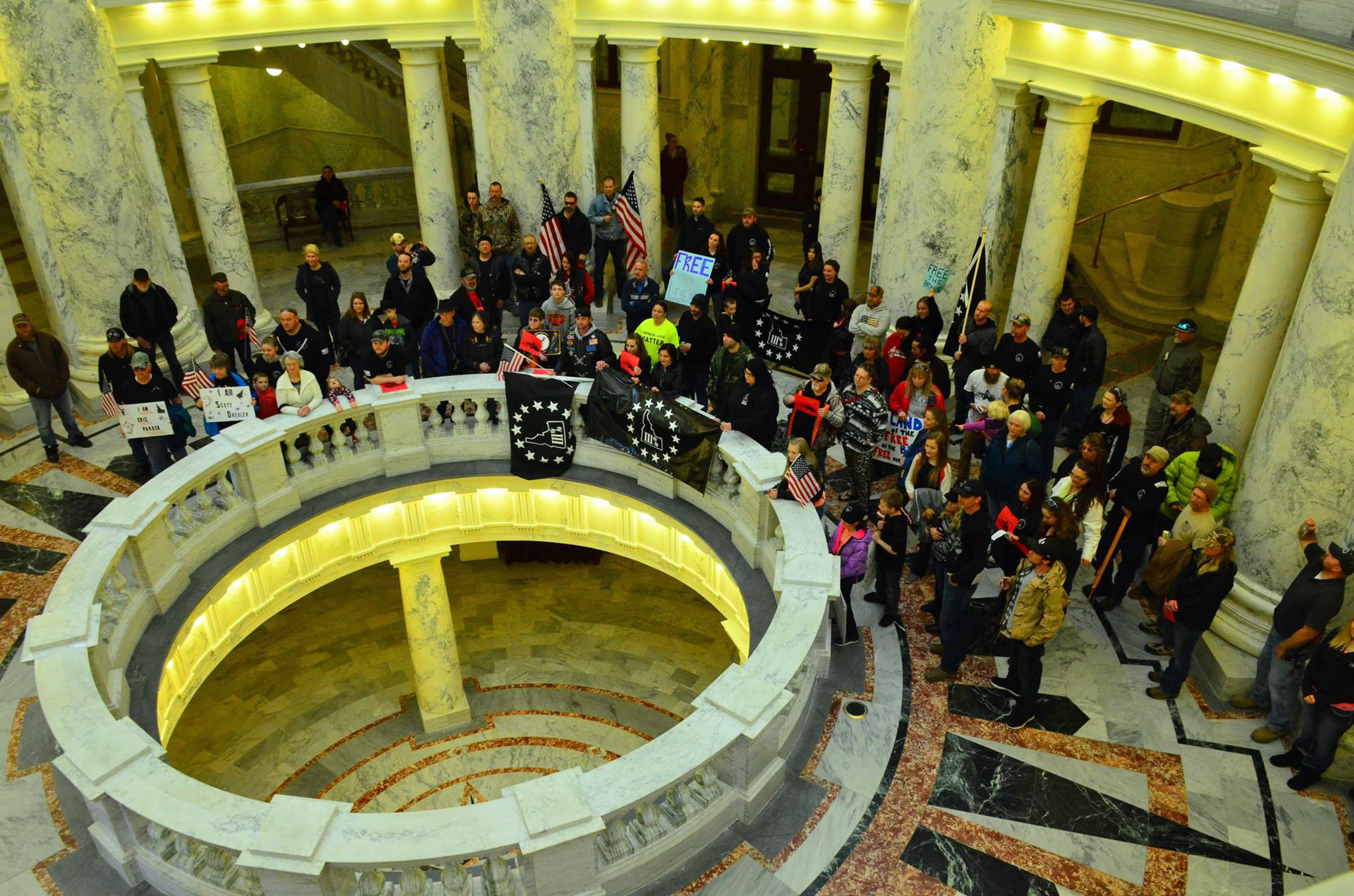 The protest finished with a gathering in the Rotunda to sing patriotic songs. Photo by 43rd State Blues.