Mark Krikorian, the longtime leader of the anti-immigrant movement’s leading think tank, the Center for Immigration Studies (CIS) is scheduled to testify today before the Senate Subcommittee on Immigration and National Interest. 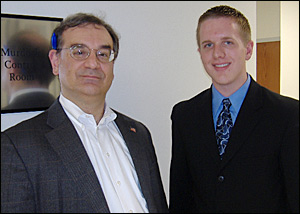 Hobnobbing with extremists: CIS Executive Director Mark Krikorian posed in 2007 with Kyle Bristow, then a student leader at Michigan State University who ranted publicly about "Judeo-Bolshevism."

Krikorian was invited to speak at the hearing titled, “Declining Deportations and Increasing Criminal Alien Releases – The Lawless Immigration Policies of the Obama Administration.”

This nativist rhetoric even in the name of the hearing is not surprising when you consider its organizer – U.S. Sen. Jeff Sessions (R-AL), chair of the Subcommittee. Sessions is a longtime ally of the anti-immigrant movement and, in particular, CIS, a group he has relied on heavily for the statistics he uses to argue against immigration reform.

It is extremely disappointing however to see a group like CIS testifying.

CIS has a well-documented history of not only demonizing immigrants (calling them “third world gold-diggers” and claiming that the policy of Temporary Protective Status for asylum seekers has contributed to the “burgeoning street gang problem in the U.S.”) but also fraternizing with white nationalists and other hate groups. Let’s not forget that CIS was founded by white nationalist John Tanton in 1985.

CIS’s problem with white nationalism is still an issue today. Not only does the group routinely circulate articles penned by white nationalists to its supporters, but the group has also recently commissioned Jason Richwine, an open racist, to write reports for the group.

Since January of this year, Richwine has authored two reports for CIS, including one published a few weeks ago on welfare and immigration.

Richwine’s racist views surfaced in 2013 after he co-authored a major report put out by the Heritage Foundation on the “costs” of the most recent comprehensive immigration reform bill. Reporters, as well as civil rights groups such as the Southern Poverty Law Center and the Anti-Defamation League, reported on a the racist nature of Richwine’s Harvard dissertation, in which he claimed, “No one knows whether Hispanics will ever reach IQ parity with whites, but the prediction that new Hispanic immigrants will have low-IQ children and grandchildren is difficult to argue against.”

Richwine’s beliefs in IQ differences between the races are prevalent not only in anti-immigrant circles, but also white nationalist ones. He authored pieces for the white nationalist website Alternative Right, founded by Richard Spencer. Richwine also spoke at an annual event put on by the white nationalist Social Contract Press, an event often attended by CIS staffers, including Krikroian. Richwine resigned from the Heritage Foundation in disgrace after these facts came to light, but it seems he has found a new home at CIS.

A robust dialogue and debate about many aspects of U.S. immigration policy are welcome and necessary, but groups such as CIS, who are clearly coming at the issue with racial biases, should not be welcomed to testify in the halls of the Senate.