The World Congress of Families, an anti-LGBT hate group, met in Tbilisi and provided a platform for anti-LGBT and anti-choice voices.

The World Congress of Families (WCF) held its tenth congress in Tbilisi, Georgia, the group’s first gathering in an Orthodox country, where WCF hopes the international pro-family movement will be able to “establish a beachhead in the region,” according to the congress’ website. The site also claims that so-called “sexual radicals” target Eastern European countries to “demonstrate their ability to overcome traditional cultures and compel people who cling to normative values to bend to their will.”

The gathering, held May 15-18, offered a panoply of anti-LGBT and anti-choice voices and fearmongering about a “secular agenda” (with roots in western nations) bent on destroying society. The gathering also seemed to serve as a vehicle for pro-Russian and thus stridently anti-western voices, with Russian participants perhaps trying to influence Georgia and further push Russia’s anti-LGBT and anti-European Union messaging.

Eastern Europe has become a battleground in the conflict over LGBT equality between Russia and western countries, as countries that have long been virulently homophobic grapple with changing attitudes toward LGBT people and more progressive stances of the European Union – of which some Eastern European states are members. The Russian government’s passage of anti-LGBT laws that have endangered the lives and livelihoods of its LGBT citizens has, however, added fuel to anti-LGBT fire in Eastern European countries, which, like Russian officials and many citizens, frame homosexuality as immoral, perverted and a radical import from the West.

These arguments continue to take hold in Ukraine and Georgia, with Russia positioning itself as the leader of “traditional values,” while Russian officials and media have worked to paint the advance of LGBT rights as some kind of Trojan horse from the West poised to destroy the “family” and western civilization.

Speakers at WCF galvanized around this theme and claimed to be defenders of the “natural family” –– one man married to one woman with their biological offspring –– against what they see as a western campaign to redefine family and marriage and grant equality to same-sex unions and the LGBT community.

Speakers also denounced abortion –– one speaker peddled the myth that links abortion to breast cancer –– and contraception and claimed that the United Nations and the European Union were playing pivotal roles in this campaign. LGBT people were a particular target of many speakers, and both Russian and American delegates linked homosexuality to fascism while main themes and buzzwords decried the threats from “genderism,” “gender theory,” “gender ideology,” “sexuality education” and the “homosexuality agenda.”

Georgian businessman Levan Vasadze, who holds a graduate degree in business from Emory University, organized the Tbilisi conference. Vasadze runs a Moscow-based investment firm and has a long history of conservative religious activism that mixes, as one reporter  wrote, “a sexualized, scatological vocabulary with a quasi-scientific, moralizing lexicon.” Vasadze is alleged to have participated in and helped to organize a brutal attack on a 2013 LGBT march in Tbilisi that commemorated the International Day Against Homophobia, Transphobia, and Biphobia.

WCF’s opening ceremony included a rare public appearance by 83-year-old Georgian Patriarch Ilia II, who is very frail. Nevertheless, he gave his blessing to the gathering. Larry Jacobs, WCF managing director, read a letter of support from former president George W. Bush, who, though not present, was honored with its “Family and Democracy Pro-Life Award.” Participants also marched through Tbilisi on May 17th to commemorate what they called "Strength of the Family Day," which coincided with the International Day Against Homophobia, Biphobia, and Transphobia. 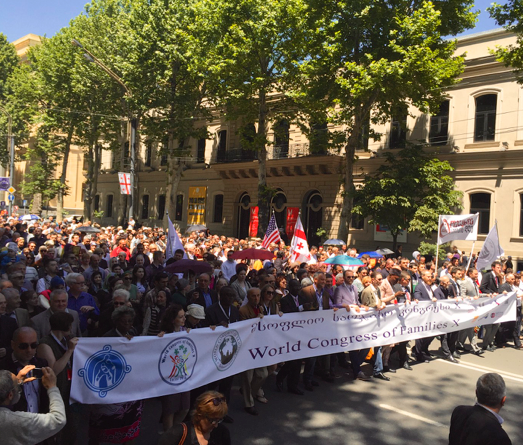 Below, some of the highlights from the conference:

Christine de Marcellus de Vollmer (Venezuela and UK), a member of the Pontifical Council for the family, warned of the dangers of “gender ideology,” describing it as a “diabolical creation of Marxist philosophy.” Those who promote it, she warned, have infiltrated the United Nations and are “actively pursuing world government,” a conspiracy theory that most often finds expression among American antigovernment activists worried about a “one world government” taking over and enslaving U.S. citizens. Marcellus de Vollmer outlined how a shadowy cabal is trying to destroy Judeo-Christian culture. De Vollmer compared these efforts to climate change, stating, “It is the same with this ‘global warming thing.’ They are going to prevent us from using the earth as it should be.” The trouble began in the West, she said, with the teaching of sex education and the “aggressive imposition of abortion.” Georgia, she said, must protect itself from “this poison from the West.”

Natalia Yakunina (Russia), chair of the board of trustees of the Russian group the Sanctity of Motherhood (which has deep ties to WCF), also blamed western-influenced “sexuality education” for the state of the world. “Sex education separated from traditional family values leads to the destruction of children’s moral health,” she said. Yakunina’s husband, Vladimir Yakunin, is a WCF founder, railroad magnate and Russian government official who is currently on a U.S. sanctions list because of his ties to Putin and Russian intervention in Ukraine.

Gabrielle Kuby, a German author and conservative sociologist, has been warning about what she sees as a global trend of “gender mainstreaming,” which, she claims, threatens human nature, for a few years. At WCF, she emphasized “how the ideology of genderism is implanted in children through sexual education.” In her view, “genderism” is a “historically unique ideology” opposed to the Judeo-Christian concepts of gender, and encourages people to be free of moral limitations, including how they choose to express themselves sexually. Such sexual freedom, Kuby argued, has led to the breakdown and degeneration of society and “a new totalitarianism.” Those who promote the ideology, she claimed, sit in the UN, the EU, global NGOs, and the media and entertainment industry.” Together, they have formed a net that has caught traditional values and social structures “like flies in a spider’s web, wrapped up and paralyzed in sticky temptations like choice and human rights.” Heterosexuality, Kuby stated, is the “natural condition of human existence.” Homosexuality is not because it creates divisions between the sexes and between generations and “thus destabilizes society.” 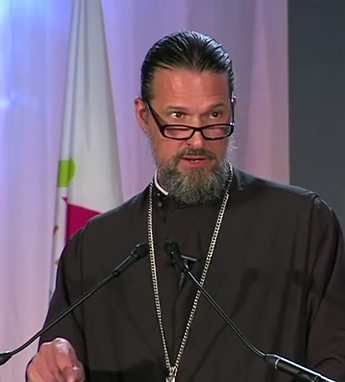 Levan Vasadze delivered the keynote speech, which was, according to one observer, a tirade against the West and what he referred to as its anti-family, anti-religious and pro-LGBT agenda. He spoke in Georgian, as the address was carried live on a local TV channel, and attacked the Georgian government for implementing an anti-discrimination law to protect LGBT people, and for failing to further restrict abortion access. “Stop this culture war on the world,” he said, and then demanded an apology from President Obama for “promoting homosexuality.” He finished with a demand that the West stop pushing gay marriage on Georgia, and many in the audience gave him a standing ovation.

Fr. Josiah Trenham, pastor of St. Andrew Orthodox Church in Riverside, Calif., delivered one of the more virulently anti-LGBT speeches, linking homosexuality to predatory and promiscuous behavior, saying that, “There’s a long and consistent history of unusual bathroom use in the LGBT community… . Today there are digital apps that guide homosexual men to particular bathrooms for sexual acts throughout the airports and other public places in America.” Keep that in mind, he said, “when you hear about the contemporary debates about the so-called transgender bathroom bills.” Trenham bemoaned LGBT rights, claiming that LGBT calls for tolerance were actually “a call for the overthrow of traditional religious and civilizational norms for family, sex and law.”

He claimed that the LGBT lobby, which has won “victory” in the media, medicine, psychiatry and courts, is now “pressing for the suppression of dissent.” He lambasted “activist judges” and went on to link homosexuality to terrorism. “Today the USA has a national ambassador for the promotion of sodomy and it uses the LGBT agenda as a litmus test for granting humanitarian aid and military intelligence against terrorism to…nations,” he said. Trenham’s apocalyptic rhetoric got a round of applause when he stated that the prophet Muhammad called for the execution of anyone practicing sodomy. “Stand firm in your faith,” he exhorted attendees. “Tell the LGBT tolerance tyrants, this lavender mafia, these homofascists, these rainbow radicals, that they are not welcome to promote their anti-religious and anti-civilizational propaganda in your nations.”

Brian Brown, director of the anti-LGBT group the National Organization for Marriage, used a popular NOM talking point when he stated, “We are discontent with a world that intentionally robs the child of his right to be known and loved by his mother and father,” a dog whistle for those who believe the “natural family” is the only acceptable family structure (i.e., one man married to one woman with biological children). He also called for a stronger international “pro-family” movement and pushed for more funding, more social entrepreneurship and fostering “humility and courage” in that movement. Brown was elected president of WCF at the conference, but he will also continue in his role as president of NOM. 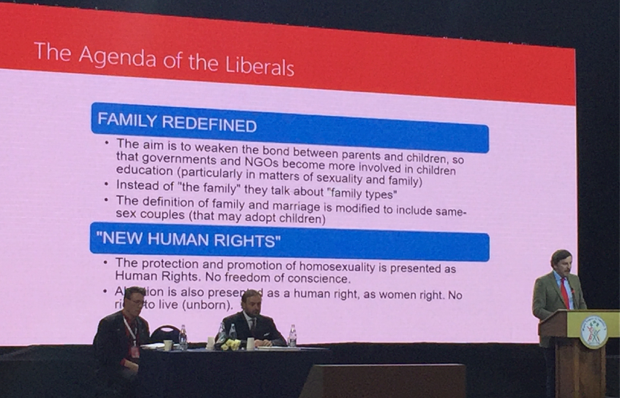 Slide from the presentation, "How to Win the Culture War," by Ignacio Arsuaga, founder of CitizenGo.

Alexey Komov, WCF Russian director and director of FamilyPolicy.ru, echoed many of the conference conspiracy theories in a talk titled “The World’s Elites, neo-Marxism and Gender Ideology,” in which he claimed that a cause behind the 2008 financial crisis in the U.S. was low birth rates. That is, because there were fewer people, there was less demand for housing and the market collapsed.

Douglas Napier, Alliance Defending Freedom, claimed that western governments in conjunction with the UN are introducing dangerous definitions of gender and also promoting LGBT rights. Napier also said because the UN has not allowed “acceptable” definitions of the family in its 2030 sustainable development goals agenda, ADF is lobbying for changes through a network of UN member states that have apparently offered to do so through ADF’s “Friends of the Family” group.

Allan Carlson, president emeritus of WCF, provided introductory remarks and read the closing declaration, a set of themes that come out of each WCF congress. Carlson lamented that many western nations and transnational bodies were “joining the cause of the sexual revolution.” He sounded another apocalyptic note, stating that “a titanic global contest over the nature of society and the fate of children has taken form.” On one side, he said, are “gathered the forces combining revolution with retroaggression, novelty with depravity, and cries of liberation with a new slavery,” a movement that elevates sexual desire and denies any natural order to human life. On the other side are “those who defend the natural family.” Georgia, he said, is a pivot point in this “great contest over the human future.” The declaration included further emphasis on marriage limited to one man and one woman, but also stated that “governments and transnational entities should cease all propaganda in favor of gender theory and sexual orientation, which has no basis in biological reality.”