Brian Brown, director of the National Organization for Marriage (NOM) has been elected president of World Congress of Families (WCF), an anti-LGBT hate group. The announcement came on the heels of Brown’s participation in the tenth world congress of WCF, which took place last month in Tbilisi, Georgia.

“I look forward to continuing to work to advance the pro-family movement in the US and around the world,” Brown said in an announcement on Tuesday. “Preserving and promoting the natural family as the core institution of society is an essential task if we are to build strong, stable, healthy communities.” 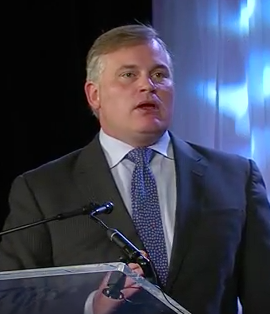 Brian Brown speaking at the 9th WCF Congress in Salt Like City, 2015

Moving to WCF is a logical trajectory for Brown, one of the best-known anti-LGBT activists in the United States. Over the past few years, he has gradually refocused his opposition to marriage equality to international work, especially after the U.S. Supreme Court ruled in favor of marriage equality. Working through the United Nations and international channels, WCF has pushed the doctrine of the “natural family” – one man married to one woman and their biological children. The idea is the basis for the development of policies and the passage of laws that further criminalize abortion and LGBT people. WCF also has worked to build support for laws that criminalize homosexuality and abortion.

Known for his measured public rhetoric but also his staunch opposition to marriage equality, Brown has a long history in anti-LGBT activism. He became director of the Family Institute of Connecticut (FIC) in 2001, where he fought against marriage equality, civil unions and domestic partnerships in the state.

During his tenure at FIC, the group posted some materials on its website that offered false and damaging claims about LGBT people, including calling them promiscuous and linking same-sex parents to pedophilia and a shortened lifespan. Other materials include a brochure by the Family Research Council, “The Slippery Slope of Same-Sex Marriage,” which states that “homosexuality is unnatural” and promotes the idea of the “the gay agenda,” a conspiracy theory that argues the LGBT community is engaged in a secret effort to marginalize heterosexuals.

2002 logo of Family Institute of Connecticut

Brown left the FIC in 2007 to join NOM’s founding board along with other anti-LGBT activists like Maggie Gallagher and conservative Robert George in 2007. NOM’s primary focus then was to push a ballot measure in California to ban same-sex marriage. Proposition 8, as it was called, passed but was later found unconstitutional. But NOM’s public profile was on the rise. The group became a clearinghouse for anti-LGBT marriage initiatives throughout the country.

But during its years of existence, NOM has repeatedly run afoul of election laws, even gaining a reputation for running political campaigns without disclosing its donors to election officials. NOM has filed several lawsuits regarding its opposition to campaign disclosure laws.

In 2014, the Maine Ethics Commission fined NOM more than $50,000 for violating state laws in 2009 during a campaign against marriage equality. The commission report suggested NOM had violated campaign disclosure laws in New Hampshire and Iowa and lied about its malfeasance to a government agency.

Then, in what became a public relations disaster, internal documents leaked in 2012 revealed that NOM was working to build a national strategy that would “expose” President Obama as a “social radical” and “drive a wedge between gays and blacks” by using black spokespeople to promote NOM’s agenda and “provoke the gay marriage base” into calling the black spokespeople bigots. Part of the strategy included “finding attractive young black Democrats to challenge white gay marriage advocates electorally” and seeking “to identify glamorous young Latino and Latina leaders…willing to stand for marriage.”

NOM also tangled with the Internal Revenue Service after tax records were leaked in 2012 that included the names of donors. A federal judge ruled that there wasn’t enough evidence to prove the leak was anything more than a single IRS employee’s mistake. Nevertheless, the IRS settled the lawsuit for $50,000 and NOM claimed victory.

By 2014, though, NOM’s finances had tanked, according to its tax returns, and the acceptance of same-sex marriage was advancing quickly. By then, Brown had already started engaging in more international efforts, working with French anti-LGBT group Manif Pour Tous during its massive protests against marriage equality. He went to Moscow in October 2013 to lobby against same-sex couples adopting children and to attend a roundtable discussion on “traditional values.” Brown addressed a Duma committee, saying that, “Every child should have the right to normal parents.” NOM did not publicly announce Brown’s trip to Russia, but he appeared on Russian media while there, Right Wing Watch reported.

World Congress of Families is also heavily involved in Russia, and supportive of that country's anti-LGBT laws, in whose wake violence against Russian LGBT people has increased.

Brown's colleagues at WCF include Larry Jacobs, WCF managing director, who expressed support for the laws, saying that they're "a great idea." It would ban propaganda to minors, he said, "preventing [LGBT people] from corrupting children." He further lamented that Europe was "going the other way, legalizing LGBT propaganda." Alexey Komov is WCF's Russian representative, and also the director of FamilyPolicy.ru. He is an ardent supporter of Russia's anti-LGBT laws and has said that "homosexual lifestyles are not healthy." Another of Brown's colleagues at WCF is Don Feder, director of coalitions and coordinator of regional conferences, who has said that, "Gay rights is about indoctrinating your children in behavior that would make a proctologist gag." Feder, who also sits on the national board of advisors of the anti-immigrant hate group the Federation for American Immigration Reform has also said of Islam that what the U.S. needs isn't gun control, but rather "Islam control," which would involve a religion test for everyone entering the U.S. and surveillance of all American mosques. Of the decision to put abolitionist Harriett Tubman on the twenty-dollar bill, Feder expressed his displeasure, saying, "American history was made by white males, who were overwhelmingly Christian."

Brown will remain president of NOM even as he takes on the mantle of WCF.