A demonstration during their annual conference in Wetumpka may have given the impression that the League of the South’s leadership has gained control of their rowdier members; a run-in with Montgomery’s LGBT community shows otherwise.

The League of the South (LOS), a Neo-Confederate hate group, hosted its annual conference on June 24th and 25th at their headquarters in Wetumpka, Alabama. While the annual conference this year was largely uneventful, a non-League event in downtown Montgomery provided an interesting window into the forces at play between the leadership and their base.

As in years past, Saturday was punctuated by approximately 30 LOS members assembling at the intersection of Highways 231 and Highway 14 in Wetumpka to engage in their forefather’s time-honored tradition of flag-waving and flyer-distribution. The group was largely older, male, and white. All reports indicate League members managed to refrain from the overt use of racial slurs.

While the LOS membership were convened in nearby Wetumpka, the Montgomery LGBT community had arranged a weekend of events for Pride that included a show of solidarity in the aftermath of the massacre of more than 49 patrons of a gay nightclub in Orlando. The events concluded with a rally on the steps of the capitol where Jefferson Davis was inaugurated as the first president of the CSA.

The Sunday PRIDE Rally began largely without incident; a few protesters were present with a large cross and signs quoting scripture, but the interactions between those participants and protesters were largely respectful. 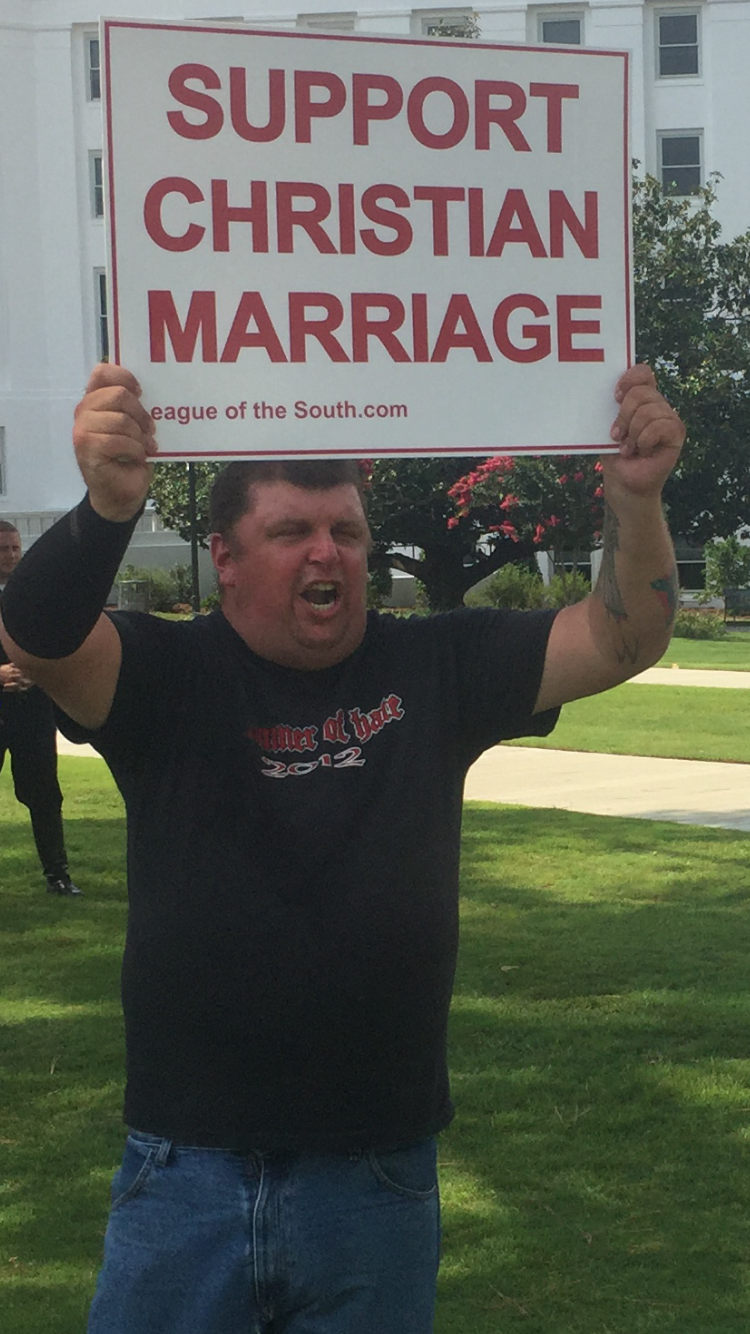 Those present were not the professional group seen at the League’s demonstration in Wetumpka the day before. The standard LOS uniform of black polo shirts and khaki pants had been abandoned for jeans, T-shirts, and shorts. They almost immediately began shouting “God hates f---” before they changed tack for less volatile chants like “Obey God's law” and “Support Christian marriage." The LOS members were greatly outnumbered by those supporting the LGBT community, who largely disregarded the League’s presence.

Among those holding the signs for LOS was Shaun Winkler, a former Klansman and listed contact for the National Socialist Movement and member of the Aryan Nations who is currently residing in Holly Spring, Mississippi. Winkler received media attention around 2012 for his abortive attempt to build an Aryan Nations stronghold near the Canadian border. During that time, Winkler ran as a “law and order candidate” for Sheriff in Bonner County, Idaho, promising that he would not allow his Klan views to sway his impartiality, and to “come down hard on sex offenders."

Next to Winkler stood Jeremy Walls, a LOS member who at the end of 2015 was arrested for inappropriate touching and tattooing of two minors in Mississippi, which caused a suspension of his tattoo artist's license pending review of the case.

Given Winkler’s established track record as a volatile member of numerous, far-flung white supremacist organizations, and Walls’ alleged behavior with minors, it is difficult to fathom how the leadership of LOS would allow two such men to lead their younger membership to a highly publicized protest without any clear messaging strategy. 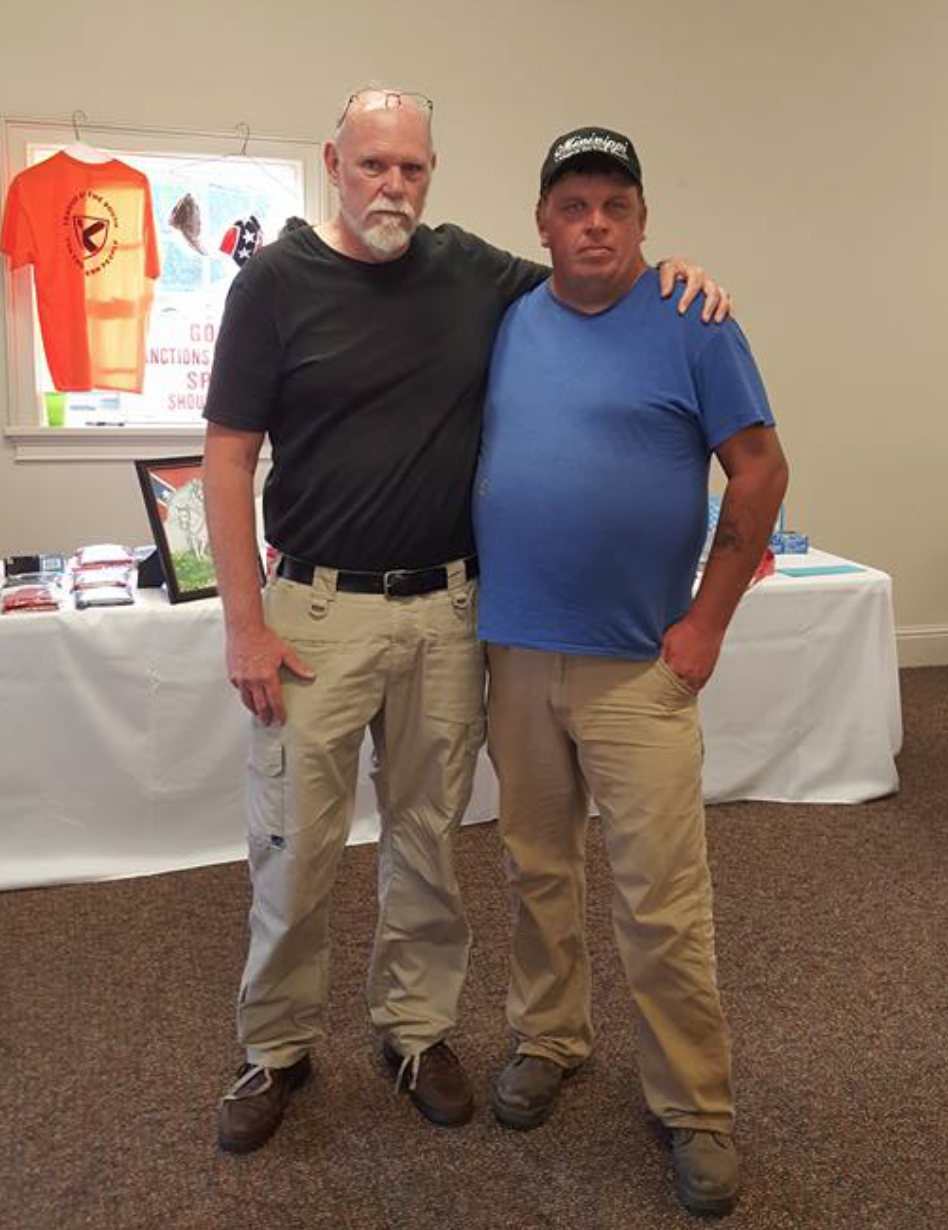 It could be that LOS founder Michael Hill is not familiar with Winkler’s reputation. It could be that he believes the charges against Walls are baseless. More likely this represents a willingness on the part of Hill and LOS leadership-at-large to allow into their midst anyone who espouses certain planks of their platform, namely homophobia and overt racism. The question then becomes whether Hill knowingly allowed his membership to attend this protest or if he was unable to rein in the impulsiveness of radical members like Walls and Winkler.

While the appeals of big-tent nationalism are readily apparent (who wouldn’t want to have more than forty individuals show up for their rally?) so too are the perils of allowing entry to every stray dog that shows up at the gate.

Where LOS leadership has made strides in controlling messaging at rallies and events, any illusion of restraint among the rank and file disappears without supervision. Hill’s willingness to grow the size of his organization regardless of who joins the fold may prove problematic for him down the line.