Nearly three years ago, the League of the South abandoned the Confederate Battle Flag (CBF) in favor of a blacked-out adaptation created by a former member. A recent blog post by League president Michael Hill titled “Past, Present, and Future” attempts to rationalize the group’s reversal of their stance on the CBF and to qualify their use of the new flag alongside the Confederacy’s vaunted icon as part of a larger, deliberate shift towards “Southern Nationalism.”

“[W]e now have adopted a Southern nationalist flag –– a black St. Andrews cross on a white field—that is The League’s own banner,” Hill wrote. “It is not intended to replace any of our historic Southern/Confederate flags; it is merely our own contribution. It is a symbol that belongs uniquely to us as a Southern nationalist organization.”

Hatewatch has already reported on the League of the South’s hypocrisy concerning the CBF. Further examination of the League’s complicated relationship with the creator of their flag-du-jour –– the “Cushman Flag” –– shows that the League remains firmly entrenched in a reactionary neo-Confederate movement currently undergoing an identity crisis.

Until recently, Hill and other LOS leaders went to lengths to distance themselves from the CBF, which re-emerged in Southern states in the 1960’s after nearly 100 years of dormancy. Preparing to embark on a new campaign of public demonstrations and aware of the CBF’s historical baggage in 2013, the League sought a symbol which wouldn’t scare away potential recruits.

While there were numerous flags flown by individual Confederate regiments and adopted by the various states, Hill wanted something fresh. Enter the Cushman Flag. 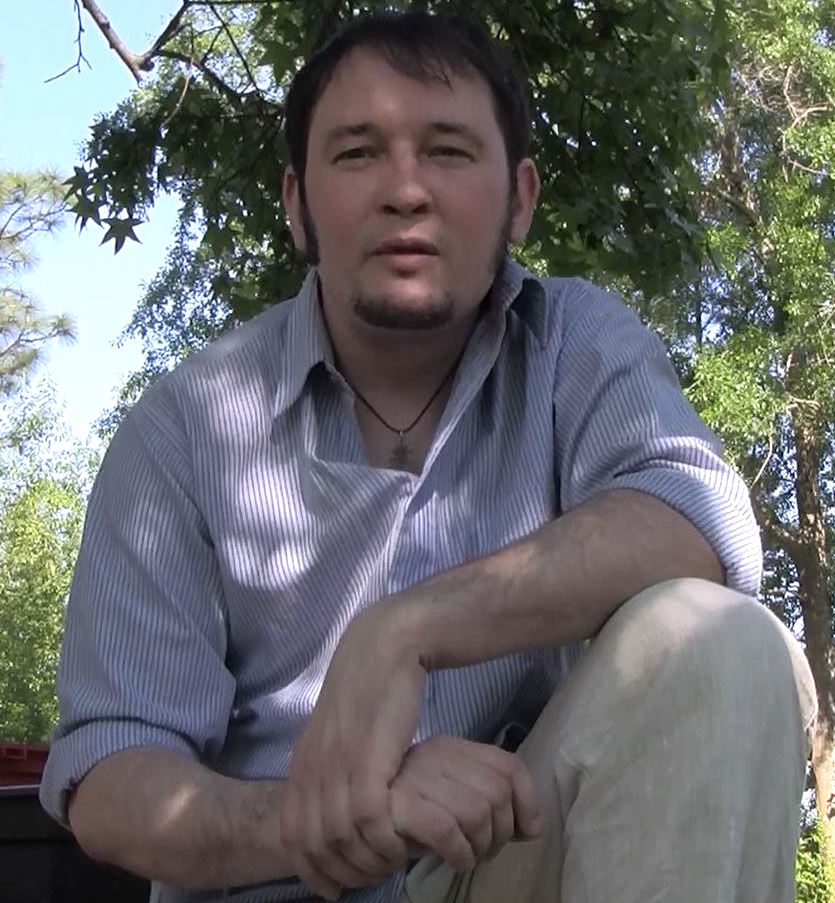 In creating his flag, Michael Cushman drew on the St. Andrew’s Cross, which is featured in the CBF and various state flags designed to mimic it. His bare bones iteration consists of a black saltire emblazoned on a white banner. The Cushman Flag first began to appear publicly in 2013, adorning the shirts, signs, and trucks of LOS members at rallies across the Southeast. During this period, the CBF was conspicuously absent.

But the League’s public efforts to distance itself from the CBF were short lived. Almost overnight, after the massacre of nine black parishioners in Cushman’s home state of South Carolina, the League positioned itself as the primary defender of the flag as calls grew nationally for its removal as a symbol in the public square. A typical League demonstration now consists of scattered lines of flag-poles with the CBF and Cushman Flag born aloft along highway shoulders.

So who is behind this new flag?

During his time in the League, Cushman was one of their leading intellectuals, described in his speaker’s biography for the 2013 League National Conference as having “a bachelors in history and studied teaching in graduate school.” He was also at the time a dues-paying member of the National Alliance, once the largest racist organization in the United States and a testing ground for some of the racist underground’s most notable killers.

Cushman left the League last year, but that doesn’t mean he quit the movement. His new website, “Southern Future,” functions as a portal to sell copies of his new book on the origins of the “Southern Nation.”

There are clear parallels between Cushman’s vision of a “Southern Future” and the League’s own. The bulk of their messaging centers around the “Southern Nation,” which they claim is composed of a racially, culturally, and ethnically distinct “Southern people.” Both advocate for political autonomy as a cure for society’s ills and the perceived slights against the Southern people –– multiculturalism, egalitarianism, and the expansion of Federal authority in pursuit of those aims. Both feature the Cushman Flag prominently on their websites.

These similarities contradict Michael Hill’s claims that the League is different than other neo-Confederate groups. In fact, changing the League’s banner has done little to change the nature of the group, especially with Hill’s increasingly racist rhetoric and the League’s open embrace of violent tactics.

Although Hill claims the Cushman Flag in his attempt to repackage the League as a “Southern Nationalist” organization, that flag’s history in the larger narrative of the Neo-Confederate movement helps distinguish fantasy from reality.

Michael Hill and the League have reversed their stance on the CBF multiple times, based on a calculated response to the national and international climate. They continue to wave the Cushman Flag in spite of his departure and comparatively calm rhetoric. Any attempt on the part of Hill to excuse that reversal amounts to whitewashing inconvenient history.

While it may be unclear which banner Hill will tout a year from now, one thing remains certain, that he will leverage whatever he can to drive membership.