Hours before Democratic nominee Hillary Clinton is scheduled to deliver a speech in Reno, Nev., slamming Donald Trump for his connections to the Alt-Right, the racist core leadership of the ideology is collectively tripping over itself trying to take credit for its unexpected success.

Clinton’s speech comes a little more than a week after the Trump campaign announced the hiring of Stephen Bannon, the controversial executive chairman of Breitbart News LLC.

A former staffer has accused Bannon of running meetings at Breitbart like white supremacist rallies. Ben Shapiro, formerly of Breitbart News, has gone so far as to claim that under Bannon’s leadership:

Breitbart has become the alt-right go-to website, with [Milo] Yiannopoulos pushing white ethno-nationalism as a legitimate response to political correctness, and the comment section turning into a cesspool for white supremacist mememakers.

Last night, Richard Spencer, arguably the father of the Alt-Right, issued a press release claiming that connecting the Alt-Right to Trump and Bannon is “guilt-by-association” and that they are simply peaceful advocates for European-Americans.

“The truth is, the ones with a ‘dark’ and ‘dystopian’ vision are those people [groups that support an anti-white agenda] – many of whom actively support Clinton – who are setting our streets aflame and stoking violence throughout our country,” wrote Spencer.

He went on to ask for an apology.

Shapiro’s mention of Yiannopoulos is significant. In March of this year, Yiannopoulos penned a piece for Breitbart titled “An Establishment Conservatives Guide to the Alt-Right” with Allum Bokhari, his fellow Breitbart Tech editor. The primer, which has elicited outrage from both the Alt-Right and its critics, has been dismissed as patently wrong in its claims that the racist ideology is “born out of youthful, subversive, underground edges of the internet” who “understand who the authoritarians are and why and how to poke fun at them.” 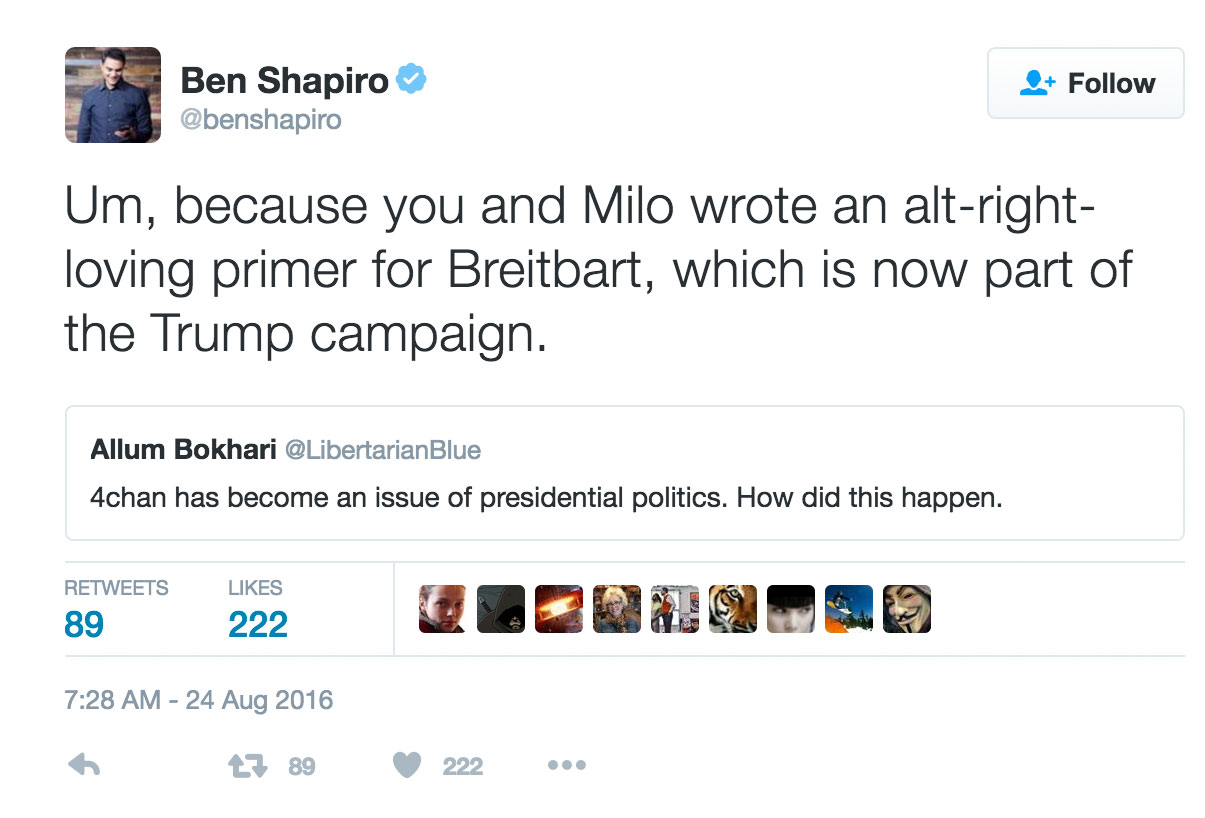 Yiannopoulos’s attempts to whitewash the most extreme elements of the Alt-Right were noticed by both the left and the Alt-Right. A Washington Post profile of the Alt-Right stated “The goal is often offensiveness for the sake of offensiveness in the way that many young white men embrace.” Andrew Anglin of the neo-Nazi website The Daily Stormer responded plainly in a post, “No it isn’t. The goal is to ethnically cleanse White nations of non-Whites and establish an authoritarian government. Many people also believe that the Jews should be exterminated.”

It doesn’t get much clearer than that.

Anglin, who seems to feed on racist drama, hasn’t been able to contain his rage over his and The Daily Stormer’s omission from Yiannopoulos’s article, which was arguably the Alt-Right’s big reveal. He’s written two articles specifically on the topic. He also promptly changed the banner of his website to read, “The World’s Most Visited Alt-Right Website.”

Yiannopoulos’s article relies heavily on the pseudo-academics that have coalesced around Richard Spencer at Radix Journal, including Steve Sailer and Jack Donovan, to legitimize the Alt-Right. Spencer, who has barely been able to control his glee at his newfound voice in the political mainstream, is not without his critics.

One of Spencer’s own followers promptly commented on his press release, “jesus f------ Christ, Richard, wait a decent number of milliseconds before lunging for the mic.”

My Posting Career, a racist forum in a league with Stormfront or Vanguard News Network Forum, has facetiously affixed Richard Spencer’s name in a curly, pink script to its banner. According to Anglin, it is the birthplace of the term “c---servative.”

When Anglin was left out of a front page Washington Post article about the Alt-Right, all he could do to console himself was complain about his web traffic being higher than Jared Taylor’s American Renaissance, Richard Spencer’s Radix Journal, and Peter Brimelow’s VDARE combined.

Not to be left out of any drama, Greg Johnson of the white nationalist publishing house Counter-Currents also published a piece last night claiming, like Spencer, that “There is no relationship between Trump and the Alt Right, just a one-way man crush.”

For all of the Alt-Right’s bravado over the last six months, its so-called leaders seem to be sandbagging. One month ago, at a party hosted by Yiannopoulos, Spencer prophesized that the Alt-Right had taken over the Right. This morning, he’s soft-pedaling the connection to the Trump campaign and the movement that he supposedly built while speculating on what Clinton might say.

Meanwhile at the Daily Stormer, a live thread this morning reads, “This isn’t going to stop. They are going to put these soft figures on TV now. They are going to speak vaguely. They will not mention the Jews. Those who have been given media attention – having been chosen as leaders by the Jews media—will then try to assert themselves as leaders, begin trying to direct the movement. And we will be run around, and end up back in the same place we were before. Ah, but we can deal with that later.”