Phyllis Schlafly, the ultra-conservative movement matriarch who was responsible for derailing the Equal Rights Amendment in the 1970s and went on to oppose gay rights and promote antigovernment conspiracy theories, has died. She was 92. 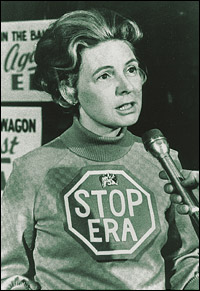 Schlafly became “one of the most-polarizing figures in American public life, a self-described housewife who displayed a moral ferocity reminiscent of the ax-wielding prohibitionist,” the New York Times wrote.

She cut her teeth, like many early-day ultraconservatives, by publicly denouncing international Communism in the 1950s after earlier studying at the conservative think tank, American Enterprise Association. She opposed limiting nuclear testing and called for a constitutional amendment to prevent the president from negotiating international treaties.

In 1959, Birch Society founder Robert Welch toured the United States, attempting to recruit “patriotic Americans” at a series of meetings, including one in Chicago attended by Schlafly and her husband, historical documents reveal.

“The John Birch Society is doing a wonderful work, and my husband and I both joined promptly after the Chicago meeting,” Phyllis Schlafly wrote in a Dec. 5, 1959 letter to Verne P. Kaub, a Wisconsin journalist and political activist who became a member of the Willis Carto’s Liberty Lobby, a conservative, anti-Communist group known for its advocacy of both white supremacy and anti-Semitism. 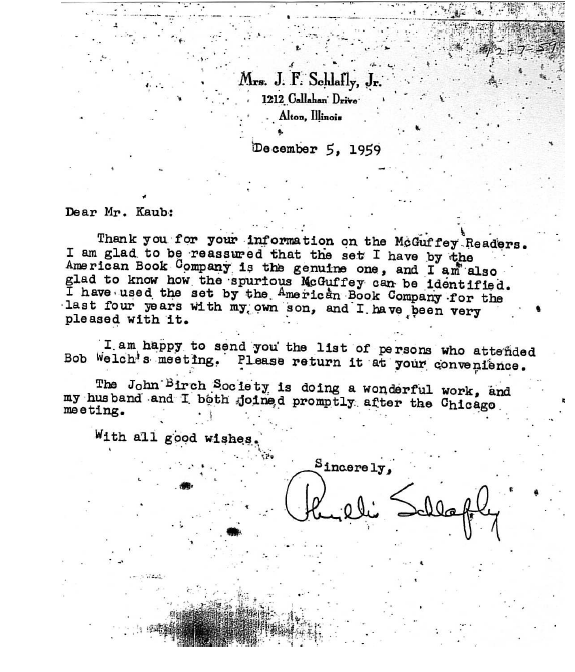 In the same letter, Schlafly thanks Kaub for information about McGuffey Readers, a set of primary grade textbooks viewed as anti-Semitic by critics.

Her letter, part of the Kaub collection at the Wisconsin Historical Society, was discovered by freelance researcher Ernie Lazar who has spent the last 35 years researching “extreme right” groups and individuals.  He recently turned his vast collection, including FBI documents and various historical documents, over to the Internet Archive.

It was the women’s rights movement that stirred Schlafly, apparently running counter to her Roman Catholic beliefs, while launching her as a popular, albeit controversial, figure in the national spotlight. Her popularity, however, was insufficient in two attempts to get elected to Congress.

When the U.S. Supreme Court banned state-sponsored prayer in public schools in 1962, Schlafly mobilized a grass-roots following –– primarily composed of Christian women –– that opposed feminism, modern liberalism and cultural changes in Western society. She argued that the equal rights amendment would take away a woman’s right to raise their own children in their home.

In response, Schlafly founded a volunteer organization called “Stop ERA” in 1972, explaining that “STOP” stood for “stop taking our privileges.” Three years later “Stop ERA” became the Eagle Forum, an Illinois-based organization that went on to espouse assorted conspiracy theories including that same sex marriage advocates are trying to destroy Christianity and that there is a secret plan to unite Canada, Mexico and the United States into the “North American Union.” 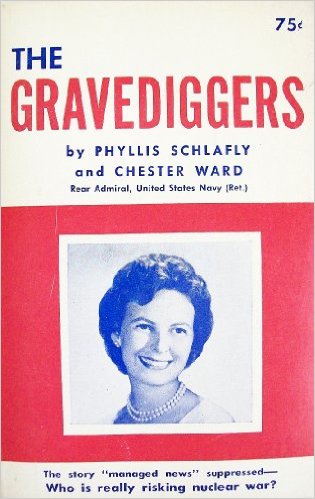 Published in 1964, Schlafly's "Gravediggers" argued that President Lyndon Baines Johnson was setting the stage for military defeat by Soviet Russia. "American gravediggers are not communists. They are card-carrying liberals. They will not commit the crime. They will merely dig up the grave."

Schlafly demanded the release of what she believed were secret U.S. documents about the “North American Union.” When that went nowhere, she called for a congressional investigation, but that also tanked. But the Eagle Forum and Schlafly didn’t stop there.

Her group was among the first on the anti-immigrant, fear-mongering bandwagon, preaching that if the flow of immigrants into the United States wasn’t controlled, Islamic “Sharia Law” would replace the nation’s form of constitutional law.

In 2005, the Eagle Forum became part of the “Secure Borders Coalition,” an alliance of Christian Right groups, including Accuracy in Media, the Swift Boat Veterans for Truth and the Minuteman Civil Defense Corps. The coalition issued a statement attacking all amnesty and guest-worker proposals for immigrants and vowed to oppose any political candidate backing those concepts.

Things between the Eagle Forum and Schlafly got rocky earlier this year when she decided to endorse the presidential bid of Donald Trump. A half dozen of the Eagle Forum board members, including her own daughter, Anne (Schlafly) Cori, didn’t think Trump measured up to the conservative standards of the organization.

With her passing, the forum’s future direction is unclear at this point.

The last of 20 books that Schlafly wrote or co-authored is about Trump, whom she called the leader of the latest grass-roots uprising.

“We’ve been following the losers for so long — now we’ve got a guy who’s going to lead us to victory,” Schlafly said in one of her last public statements.