The World Congress of Families (WCF), an anti-LGBT hate group based in Rockford, Ill., holds a yearly major gathering (Tbilisi in May) that often showcases anti-LGBT and anti-choice sentiment. It also helps organize and co-sponsor smaller, so-called “regional conferences” throughout the year in various parts of the world. This weekend, and fresh off a similar gathering in Belgrade, the organization is involved in a conference in Nairobi, Kenya, that starts Friday.

The African Regional Conference on Families is being held at the Hotel Intercontinental and the Kenyatta International Convention Center and will deal with the theme of the future of the family in Africa. The conference will address various topics, including “pressure from the west [sic] to legalize abortion and same sex unions”; “erosion of parenting responsibilities”; “family attack by media”; and “adoption of liberal laws.” 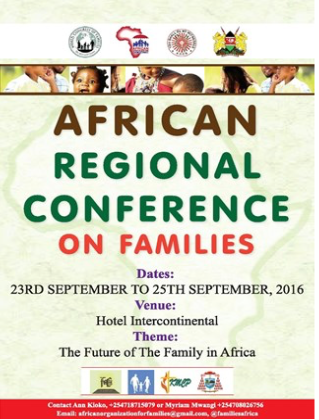 These WCF international convenings are key sites of right-wing networking and strategizing, and often involve local political figures who then use WCF talking points in the development of anti-LGBT and anti-choice policies in their home countries.

Africa continues to be a nexus of anti-LGBT and anti-choice activism on the part of U.S.-based individuals and groups, some of which, like Arizona pastor Steven Anderson, openly call for violence against LGBT people. Anderson was recently banned from the UK and South Africa and deported from Botswana because of his virulently anti-LGBT rhetoric. But many other anti-LGBT groups cloak their rhetoric in terminology like “support for the natural family,” which sounds benign on the surface but actually excludes any family structure that does not follow the so-called “one man/one woman” model.

Kenya has been a particular focal point of the U.S. Christian right for years. In 2010, the American Center for Law and Justice (ACLJ; founded by televangelist Pat Robertson), opened an office in Nairobi, around the time that Kenya was debating a new constitution that included controversial addendums to its penal code regarding abortion. The ACLJ pledged when it opened in Nairobi to lend financial support to help defeat the constitution. It has also supported the criminalization of same-sex intimacy.

Ann Kioko, president of African Organization for Families and one of the main organizers of the gathering in Nairobi, said that her organization is concerned about a recent push to legalize abortion and implementation of comprehensive sexuality education. “These programs go way beyond regular sex education and are designed to change all the sexual and gender norms of society,” Kioko stated. Kioko has described homosexuality as a “learned behavior” imported from the West, and claimed that “homosexuality exposes those that practice it to health and mental issues.” Sex education is one of the things that anti-LGBT groups battle because of fears that it promotes such things as homosexuality and promiscuity.

Conference organizers in Nairobi have already indicated that Phyllis Kandie, cabinet secretary for Kenya’s Ministry of East African Community, Labour and Social Protection will be in attendance and the conference agenda includes an exclusive closed-door meeting for speakers, dignitaries and members of parliament.

Here are some of the others on the speakers’ roster: