@Ricky_Vaughn99, one of the most prolific and longstanding Alt-Right personalities on Twitter, was suspended from the platform yesterday.

The pseudonymous account, created in January 2014, boasted around 62,000 followers and 221,000 tweets. It was identified in February by MIT’s Lab for Social Machines as the 107th most powerful influencer in the 2016 election. That’s higher than a stable of political figures and news outlets including @nbcnews and @nytpolitics. ​ 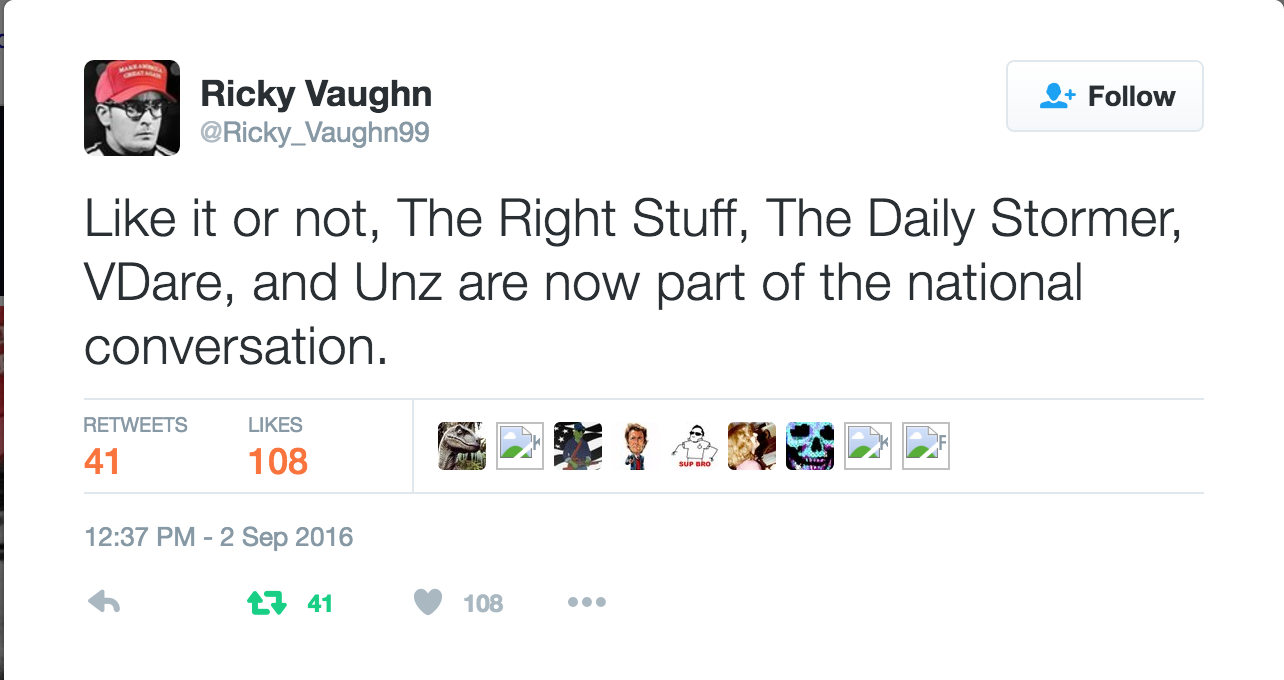 Screenshot of a @Rick_Vaughn99 tweet celebrating the growing visibility of white nationalist and neo-Nazi publications, all part of the nebulous "Alt-Right" movement.

He appeared on Richard Spencer’s Radix Podcast on January 30. At the time of his appearance, the account had 13,000 followers. The two discussed Trump and the unique power of Twitter to spread their ideas. @Ricky_Vaughn99 also described his political evolution online, one that resembles many of the Alt-Right's adherents:

I began as sort of a deracinated libertarian before the start of the first Ron Paul for president campaign. From there, I started consuming the anti-feminist blogs of the manosphere. I never really bought into feminism. From there, around the time of the Trayvon incident, I was linked to My Posting Career from Chateau Heartiste. At that time I realized what a con job the media was playing on all of us, and how the mainstream race propaganda was all bullshit. So from there I began to explore the different facets of cultural Marxism. The Jewish role in subversion, homosexuality, et cetera.

Twitter is allegedly fielding bids for a sale this week, causing speculation that @Ricky_Vaughn99’s suspension is an attempt to sanitize its image. Potential buyers are rumored to include Google, Salesforce, and Disney. Neo-Nazi internet sleuths from the Daily Stormer see the chronology of @Ricky_Vaughn99's suspension as evidence of yet another Jewish conspiracy.

“Presumably either of these Jewish companies would get a lot more hardcore on censorship than Twitter has been so far, but they certainly don’t want to spend billions on a company that is just going to collapse,” wrote Andrew Anglin. “Maybe part of negotiations was ‘ban one of these anti-Semitic and racist Trump supporters so we can see what happens.”

Anglin was banned from Twitter for misconduct during the Missouri student protests last year over a lack of response to a string of bias incidents from university officials. He led misinformation campaigns with the help of his readers, seeding false information to disrupt protestors using the platform to organize. 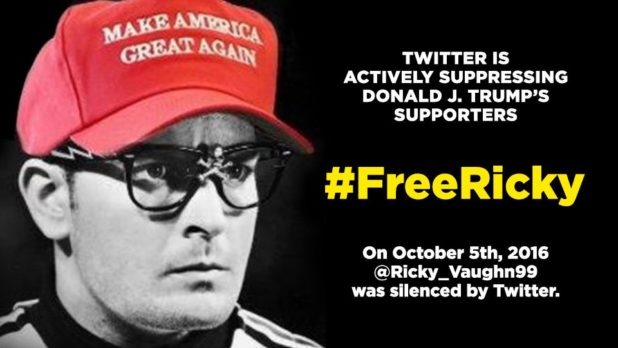 Briefly last night, the hashtag #FreeRicky was the top trend on Twitter before falling to #NLWildCard and #AddSportsRuinAMovie.

More recently, in July, Twitter permanently banned Breitbart tech editor Milo Yiannopoulos for leading a campaign of harassment against comedian Leslie Jones that led her to briefly quit the platform in disgust. Yiannopoulos is a self-appointed leader of the Alt-Right who co-wrote a controversial primer that whitewashed the racism at the heart of the nebulous ideology. Yiannopoulos' involvement in the Alt-Right brand is a continuing source of angst for other leaders like Anglin, who declared a “Crusade” against the “k--- infiltrator,” and Spencer, presumably because Milo has gotten more press.

Twitter has not announced the specific reason for @Ricky_Vaughn99’s suspension, but his fans and followers are users who frequently harass others, including journalists who happen to be Jewish, conservatives who balk at open white nationalism, pejoratively labeled “c---servatives," and "Social Justice Warriors." Instead of banning thousands of accounts Twitter seems to be taking aim at perceived leaders of the worst actors on the platform

During a discussion of digital platform censorship @Ricky_Vaughn99 told Spencer:

His premonition has finally come true.