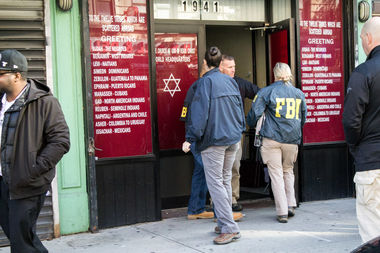 Raid at Israelite Church of God in Harlem. (Source: Facebook.)

The search was carried out on Tuesday at the Israelite Church of God in Jesus Christ in East Harlem, according to media reports. The FBI confirmed that a court-authorized search warrant was executed, but said nothing else.

A second search was carried out at Bethel Church of Our Lord Jesus Christ on Third Avenue, CBS News reported. It’s not clear if it also is a Hebrew Israelite church.

A Harlem-based news operation, dnaInfo, reported that authorities carried out the search at the Israelite Church of God “in relation to an investigation into financial irregularities.”

The church, a black separatist group, is on the extremist fringe of the Hebrew Israelite movement, a black nationalist theology dating back to the 19th century that preaches people of color are the true children of God.

“Those whose fathers are of Negroid and Indian descent make up the 12 tribes of the nation of Israel,” the church's literature says. Its extremist leaders preach that modern-day Jews are devilish impostors and white people are evil personified, deserving of death or slavery.

The extremist Hebrew Israelites are viewed as the black counterparts of white, Christian Identity believers who claim they are the true Jews, parts of the “lost tribes of Israel.”

For the past 16 years, Jermaine Grant, 38, known by his “Hebrew name”  Tazadaqyah, has been the “chief high priest” of the Israelite Church of God in Jesus Christ. He has been described as a former rap music label owner and restaurateur with a “highly charismatic” personality.

Grant, who also calls himself the "Holy God Sent Comforter of the Nation of Islam,"  posted a video statement, taped as agents were conducting the search in Harlem.

"The church has been raided by the FBI ... the persecution has begun" the Hebrew Israelite leader said. Later in the short video, Grant says:  "I want all you brothers and sisters to hold your heads up high because we are doing nothing wrong and we're being persecuted for righteousness.  The Lord our God will fight for us."