Analysis conducted by the Southern Poverty Law Center’s Hatewatch staff has found that when it comes to hate speech on Twitter, many of the most prominent and prolific associated hashtags stem from a small number of users on the far right whose content is retweeted by other users, massively amplifying what are otherwise niche views on the radical fringe.

Hatewatch has aggregated a glossary of some 1,000+ hate speech phrases that are popular on the radical right and cross-referenced those with a list of alt-right Twitter personalities. Among those in the initial control group were @Nero, @RickyVaughn_99, @ramzpaul, @RichardBSpencer, and @PamelaGeller. These accounts frequently used the platform to disseminate speech advocating for ethnic cleansing, racial separatism and acts of violence against minorities, as well sharing openly racist, xenophobic, and anti-Semitic imagery.

The resulting index has provided insight into the nature of the alt-right Twitterverse. This has been detailed in reports on the hashtags #hillaryshealth, #buildthewall and #draintheswamp, which revealed that in spite of the apparent prominence of these views on the platform, it is really the work of a small cadre of users generating the original content.

The following chart is a visualization developed to allow users to explore one specific cross-section of Hatewatch’s analysis, a period from Aug. 31-Oct. 25 which represented a peak usage period for #draintheswamp and #hillaryshealth.

Individual nodes on the chart represent distinct users who included #draintheswamp (light blue), #buildthewall (tan), #hillaryshealth (orange), or a combination of the three (dark blue) in a tweet, or retweeted one such post.

Individual nodes on the chart surrounded by a cloud of other nodes represent an influential user, defined as someone whose tweet containing the hashtags was retweeted over 50 times, with those retweets shown as individual nodes connected to that “influencer” via arrows. 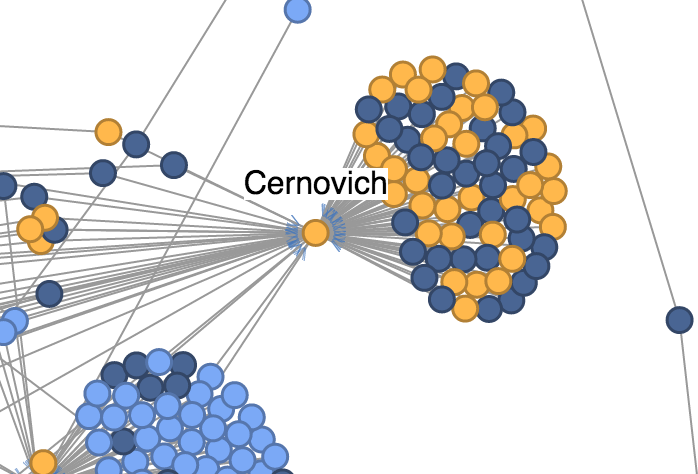 Cernovich's account as a node in a cluster of re-Tweets.

Those clusters outside of the central network represent users of the three hashtags who were not employing them as a specific reference to the presidential campaign of Donald Trump or the 2016 election.

The high concentration of interconnected, clustered groups in the center of the chart supports the finding that a bulk of the mainstreaming of far-right views occurs when a small cadre of extremists generate large amounts of content either independently (#hillaryshealth) or based on cues from the Trump campaign (#draintheswamp, #buildthewall), which is then retweeted and shared by other users en masse.

Users can explore Hatewatch’s analysis by using the search box in the upper left of the chart to search for a node representing a specific account name. Clicking and dragging a node will allow it to be moved around the chart. Releasing the mouse pins the node to that particular location. This can be undone by double clicking on the node.