Between Wednesday, November 9, the day after the presidential election, and the morning of Monday, November 14, the Southern Poverty Law Center collected 437 reports of hateful intimidation and harassment.

The following reports were collected through news reports, social media, and direct submissions via SPLC's #ReportHate page. These incidents, aside from news reports, are largely anecdotal. The SPLC did follow up with a majority of user submissions in an effort to confirm reports. As we reported earlier, many incidents involved direct references to the Trump campaign and its slogans. 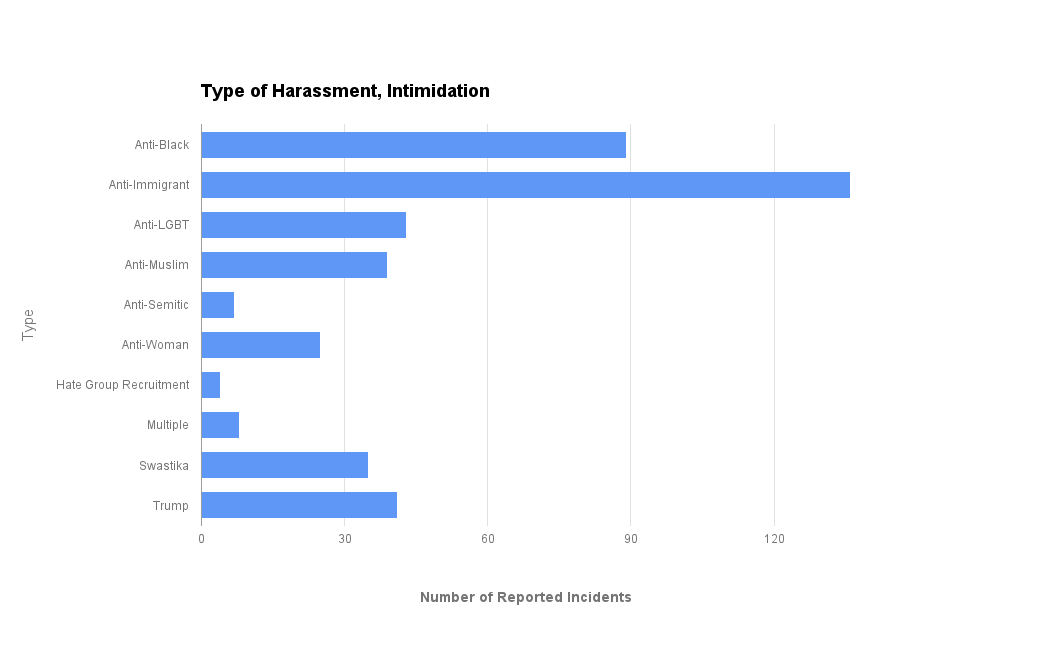 Most of the reports involved anti-immigrant incidents (136), followed by anti-black (89) and anti-LGBT (43). Some reports (8) included multiple categories like anti-Muslim and anti-immigrant. The "Trump" category (41) refers to incidents where there was no clear defined target, like the pro-Trump vandalism of a "unity" sign in Connecticut. We also collected 20 reports of anti-Trump intimidation and harassment.

Here are some examples from around the country:

A Muslim woman was riding the Max to Beaverton in the early afternoon and a group of teenagers went to the corner of the car where she was sitting and got up in her face yelling at her that she was a terrorist, that our new president was going to deport her, that she can't wear her hijab anymore. They got increasingly menacing, and my friend went over and made them get off the train. When they were leaving through the door they tried to spit on her.

A gay man in North Carolina:

My boyfriend and I were walking down the sidewalk in Raleigh, North Carolina. It was 9:30 PM, and we were holding hands and walking to a restaurant for dinner.  A white car passed us and a white male in the back passenger-side seat leaned out the window and yelled, "F------ f------!" at us.

A Latina woman in Texas reported:

I was walking my baby at my neighborhood park and a truck drove by with a male driving and a female passenger. The female yelled "white power" at us as they drove by and then sped away. 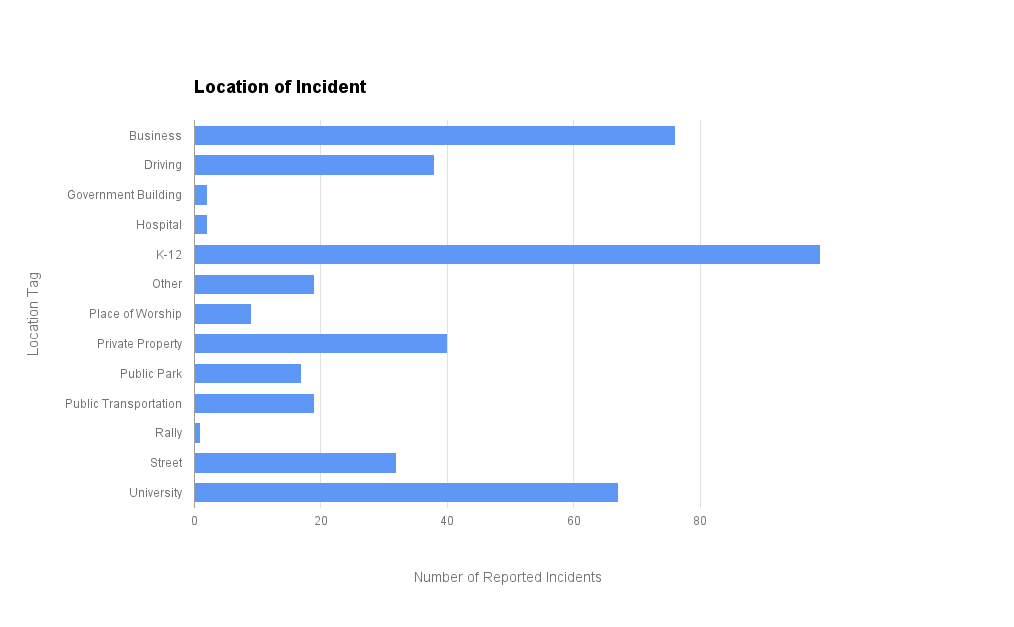 Venues of harassment included K-12 schools (99), businesses (76), and universities (67). Common also was vandalism and leafleting on private property (40) and epithets and slurs hurled from moving vehicles (38).

At an elementary school in Texas:

My 13 yo half Filipino daughter was approached by a child she didn't know as she waited to board her bus after school. The young man stated "You're Asian, right? When they see your eyes you are going to be deported" and he walked away. I reported this to my district Superintendent.

From a news report in Georgia:

A Gwinnett County high school teacher said she was left a note in class Friday telling her that her Muslim headscarf "isn't allowed anymore." “Why don’t you tie it around your neck & hang yourself with it...,” the note said, signed "America!"

A swastika was spray painted on a billboard for the movie "Almost Christmas," which shows an African American cast. 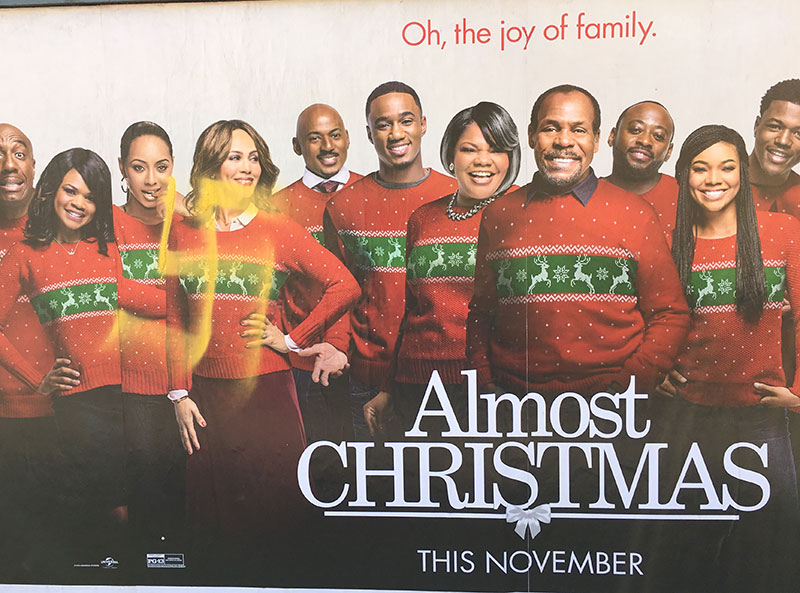 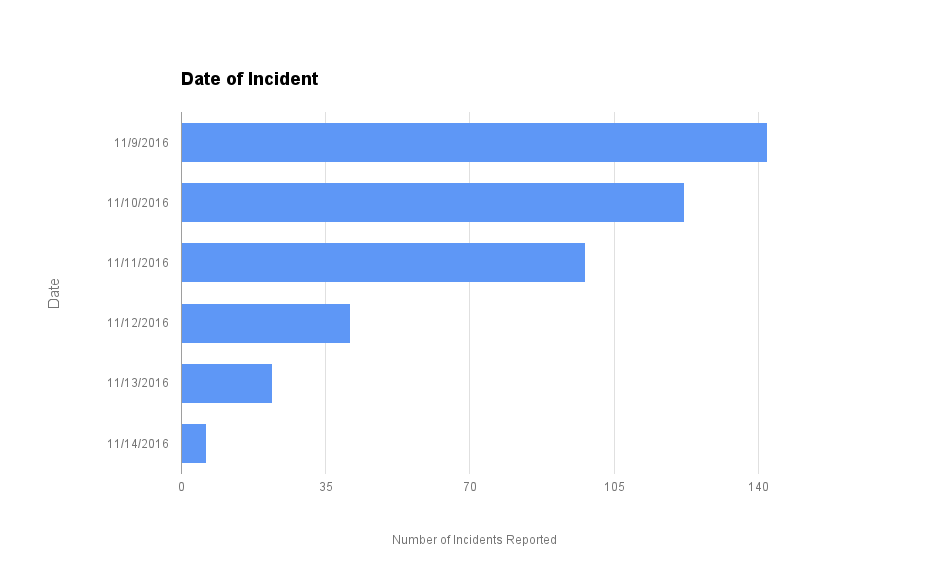 See the below interactive for state totals: