Reports of hateful intimidation and harassment erupted across social media networks in the wake of the presidential election Tuesday night.

Pulling from news reports, social media, and direct submissions at the Southern Poverty Law Center's website, the SPLC had counted 201 incidents of election-related harassment and intimidation across the country as of Friday, November 11 at 5pm. These range from anti-Black to anti-woman to anti-LGBT incidents. There were many examples of vandalism and epithets directed at individuals. Often times, types of harassment overlapped and many incidents, though not all, involved direct references to the Trump campaign. Every incident could not be immediately independently verified. 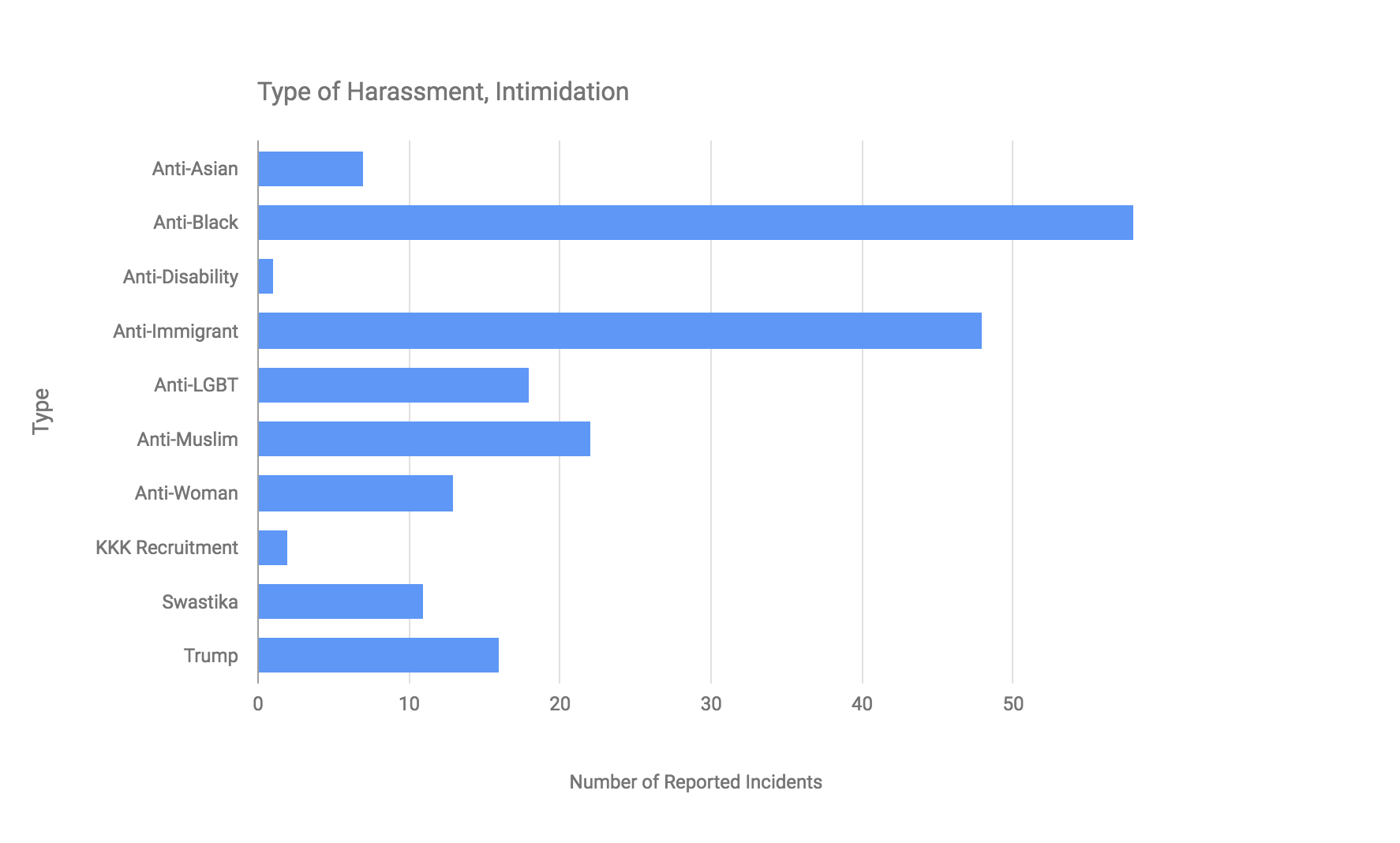 Anti-Black and Anti-immigrant incidents were far and away the most reported with anti-Muslim being the third most common. The category of "Trump" consisted of incidents where there was no clear racially defined target, like the pro-Trump vandalism of a "unity" sign in Connecticut.

Some of the reports that came directly to the SPLC include:

My 12 year old daughter is African American. A boy approached her and said, "now that Trump is president, I'm going to shoot you and all the blacks I can find". We reported it to the school who followed up with my daughter and the boy appropriately.

Another, this time in a college setting:

The day after the presidential election, my friend, a black female freshman in a [Boston area college], heard a white female student say: "this is their punishment for 8 years of black people." When she turned around to see who said it, the white student laughed at her.

In Louisiana, a woman was harassed by white men in a passing car which was a frequently reported "venue" of harassment since election day:

I was standing at a red light waiting to cross the street. A black truck with three white men pulled up to the red light. One of them yelled, "F--- your black life!" The other two began to laugh. One began to chant "Trump!" as they drove away.

Anti-immigrant incidents often came with reference to the Trump campaign. In Washington state, a teacher reported:

"Build a wall" was chanted in our cafeteria Wed at lunch."If you aren't born here, pack your bags" was shouted in my own classroom. "Get out s---" was said in our halls.

A student in an English IV course told his teacher, who is Mexican-American, that he needs to take his family and get out of our country. The student mentioned he wasn't welcome any longer. He supported this argument by citing comments from our President-elect.

There were reports of misogynistic incidents as well like this incident from Colorado:

"Death to Diversity" was written on a banner displayed on our library for people to see, as well as written on posters across campus. As well as white males going up to women saying that it was now "legal to grab them by the p----". 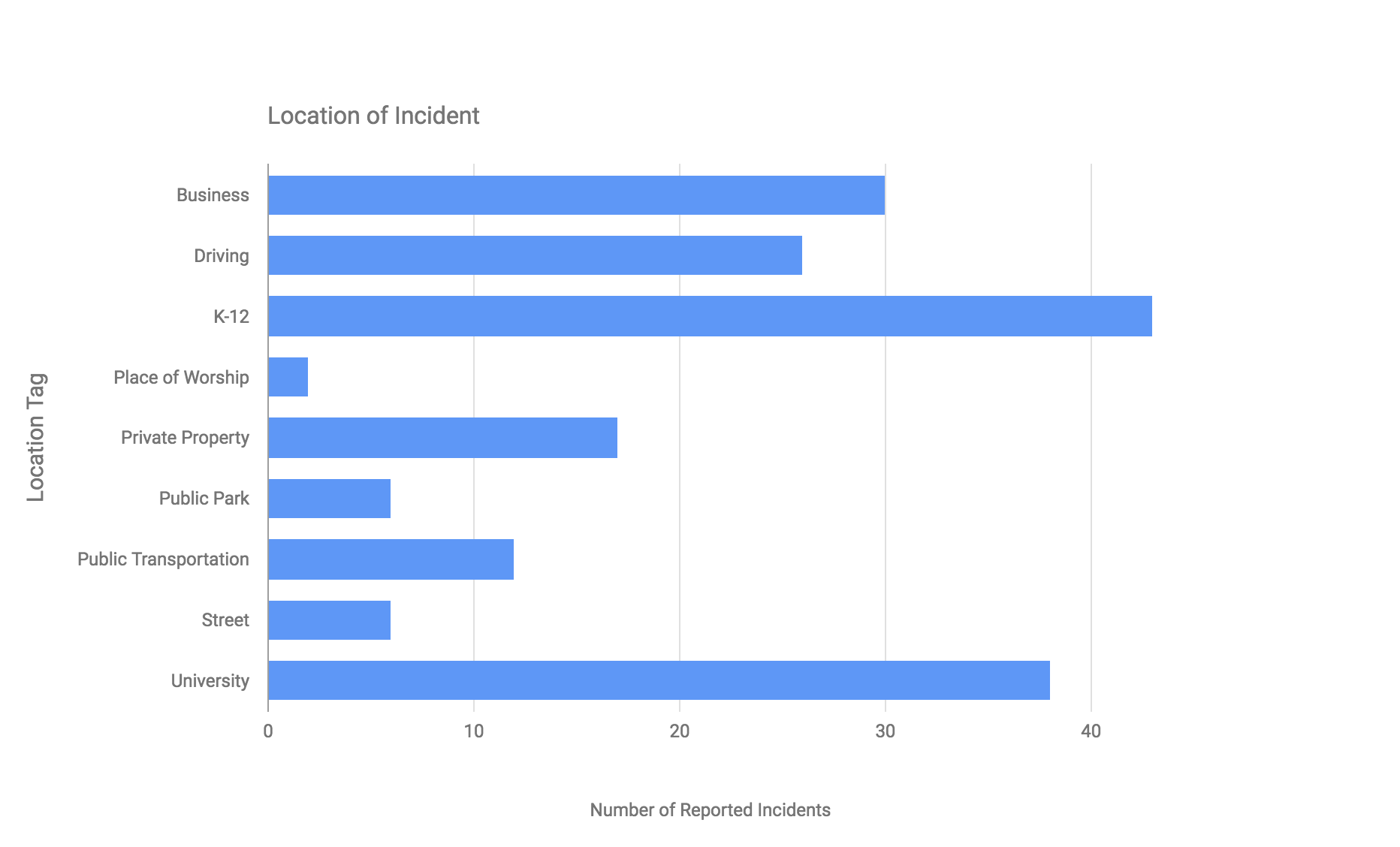 Disturbingly, the most commonly reported location where incidents of harassment occurred were K-12 schools. Previously, the SPLC reported on the deteriorating climate in schools as a result of the campaign for president. It appears that the election results might have pushed some schools to a boiling point. For example, a school in Maple Grove, Minnesota, made headlines after racist and pro-Trump graffiti was found in the school bathrooms.

Some of the reports submitted to the SPLC that occurred in schools include this from Illinois:

On Wednesday, November 9, 2016, a student in a Trump T-shirt was going down the halls of the high school saying, "BYE!" to girls in hijabs and anyone who appeared to be of Mexican descent. (The matter is being investigated.)

According to another submission, a number of students were suspended from Millersberg Area High School in Pennsylvania for "harassing a Latina student chanting "Trump" and cheering when she ran out crying."

As mentioned above, harassment that came from drivers was also frequently reported, like this incident in Austin, Texas:

Today a young Latino man in is 20's, and a co-worker of mine, was walking into work as a truck slowed down and two white men threw a bag of garbage onto him and yelled, "you are going back to where you came from" and drove off. This was in Austin, a very liberal and progressive city. I am shocked and appalled that this happened.

White males in black Ford truck were calling a black family in vehicle next to them N***ers, and yelling that it was Trump's country now. Truck sped off before I could get license info.

The SPLC received a handful of reports (around 10) of anti-Trump harassment and vandalism as well, the majority of incidents taking the form of the latter. A video of a white man and alleged Trump voter being beaten in Chicago is making the rounds on social media but authorities say that the incident was the result of a traffic altercation.

Below are the two charts showing the state distribution of reports and incidents per day since the election. Fortunately, reports have been slowing down. We'll have a follow-up to this post next week. 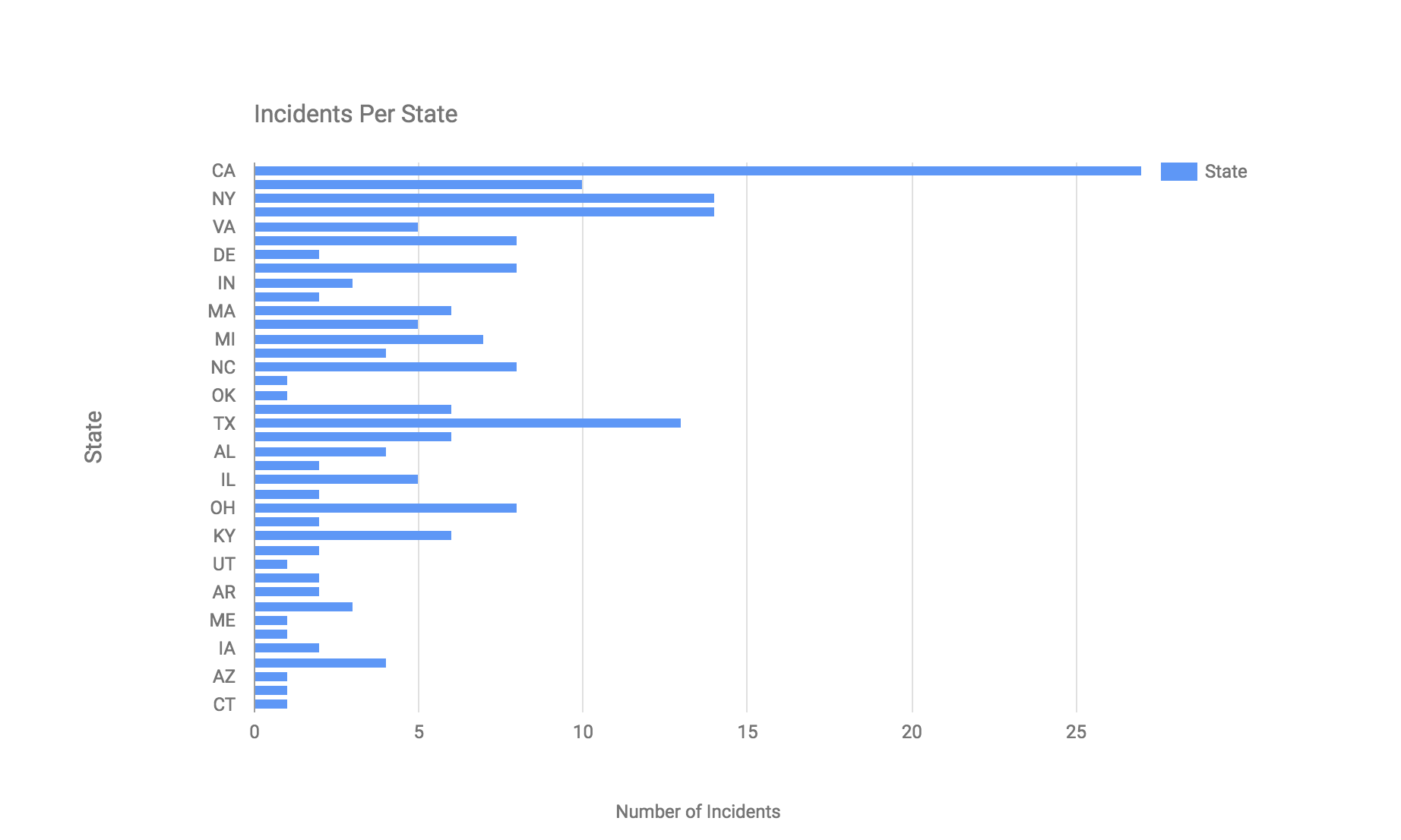 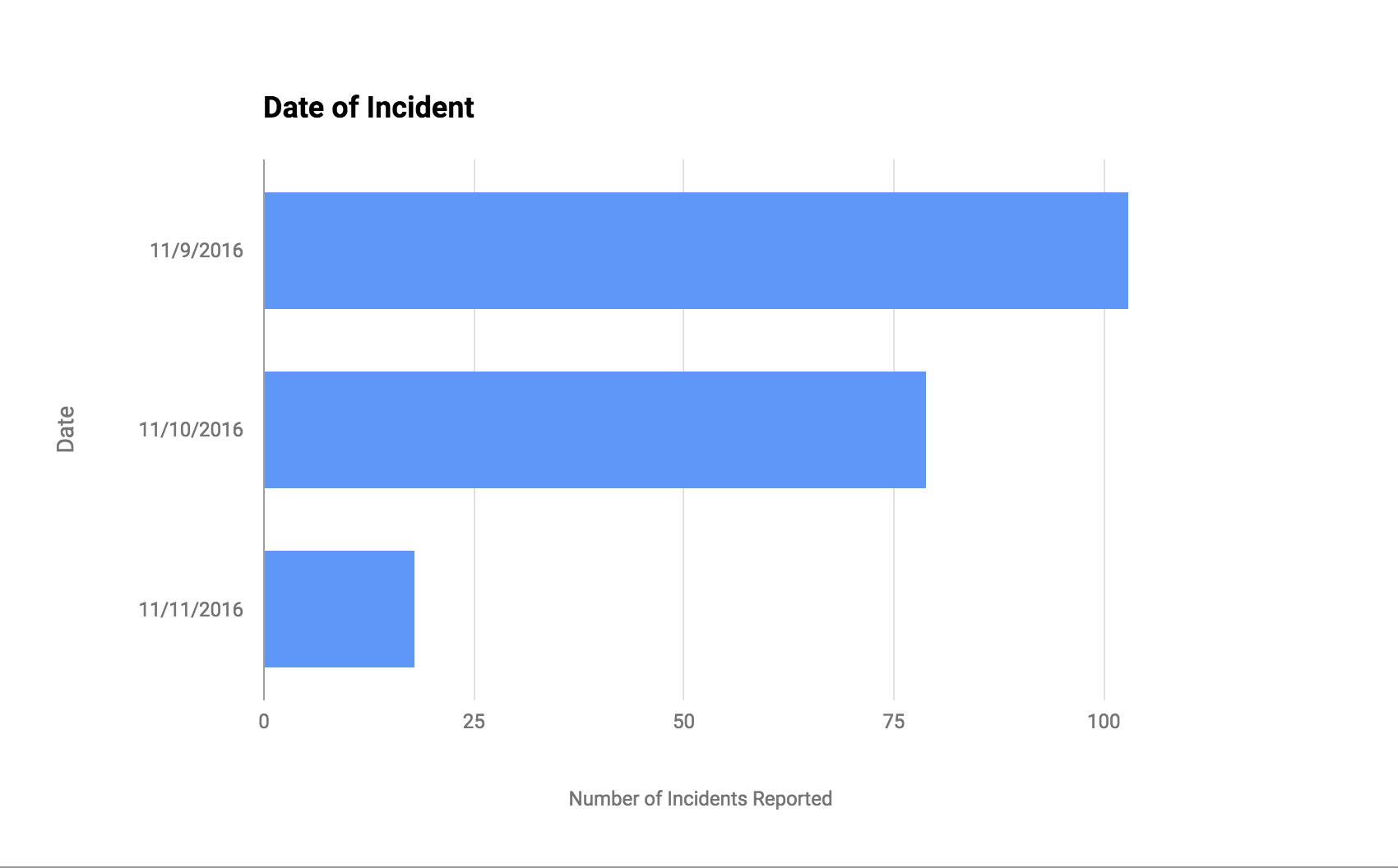