President-elect Donald Trump has tapped U.S. Rep. Tom Price (R-GA) to be the administration’s nominee for director of Health and Human Services. 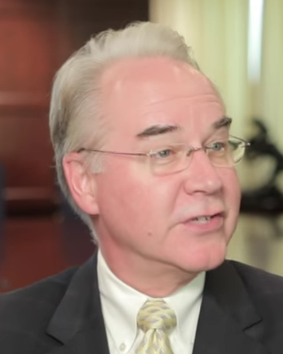 Price, a medical doctor, has a long history of anti-LGBT legislative work and has been working to repeal the Affordable Care Act since its passage. The ACA (also known as “Obamacare”) provided coverage to millions of Americans, but has been roundly pilloried by many conservatives.

In 2006, Price voted in support of a constitutional amendment to ban marriage equality nationwide. In 2015, with the U.S. Supreme Court ruling that legalized same-sex marriage, Price said, “It is not only a sad day for marriage, but a further destruction of our entire system of checks and balances.”

Price has also voted against repealing the so-called “Don’t Ask, Don’t Tell” law, which prohibited the military from discriminating against the closeted LGBT persons while simultaneously forbidding them from serving openly in the military; he also voted against hate crimes legislation and against a version of the Employment Non-Discrimination Act, a federal law that would have prohibited discrimination in hiring and firing on the basis of sexual orientation and gender identity in companies with more than 15 employees.

“The consequences of activity that has been seen outside the norm are real and must be explored completely and in their entirety prior to moving forward with any social legislation that would alter things,” Price told Leiter.

Price’s voting record during his time in office indicates that he is also staunchly anti-choice, and has voted consistently to ban federal health coverage that includes abortion, to restrict interstate transport of minors to get abortions, has voted to grant “pre-born” equal protection under the 14th Amendment and has also voted no to expand research to embryonic stem cells. In addition, Price voted no on reauthorizing the Violence Against Women Act, no on four weeks of paid parental leave for federal employees, no on grants to Black and Hispanic colleges; no on expanding the Children’s Health Insurance Program; no on giving mental health full equity with physical health and yes on denying emergency medical care for lack of Medicare co-pay.

A member of the AMA, Price has also been a member of the ultra-conservative/Libertarian Association of American Physicians and Surgeons (AAPS), based in Tucson, Ariz. Founded in 1943 to battle socialized medicine and an alleged government takeover of medicine, some of its former leaders were members of the antigovernment John Birch Society. The group was alleged to have had around 5,000 members in 2014. Its general counsel is Andrew Schlafly, son of the late Phyllis Schlafly, who was a scion of conservative and conspiracist ideologies. Andrew Schlafly is also a homeschool advocate and a founder of the website Conservapedia, which has promoted ideas like public schools make homosexuals; atheists tend to be fat, which impedes brain function; liberals don’t think lying is wrong and evolution is racist and fundamental to Nazism and communism, as well as the idea that evolutionists no longer debate creationists because, the site says, creationists tend to win the debates.

The AAPS’s beliefs are often at odds with evidence-based modern research about public health. It publishes a journal that peddles pseudoscientific and false claims including: that HIV does not cause AIDS; that abortion is linked to breast cancer; and that vaccines cause autism. The summer, 2016 issue included an article about gender dysphoria by Michelle Cretella, director of the anti-LGBT hate group American College of Pediatricians and another by anti-trans psychiatrist Boris Vatel.

The group’s executive director, Jane Orient, is a contributor to the far-right conspiracist site World Net Daily (WND), where she wrote last week that there is a case for not having health insurance. “One option is to just do without,” she says, because it’s the patient’s choice, and “not President Obama’s.” And if you have a medical emergency, her advice is to pay out of pocket and if you have to, sell your assets to do that if you can’t afford it. “The right to be uninsured is a necessary safeguard,” she wrote, and “not a threat to the system.”

In another piece, she argued against public accommodation for trans people, referring to them as “transgenders” and wondering what will happen to health and “strength and lung capacity” if a man transitions to a woman? She further argued that the “real agenda” of trans accommodation is to undermine the family, stigmatize Christianity and traditional morality “and to break down all resistance to a totalitarian state that dictates belief and behavior.”

The American Medical Association (AMA) released a statement in support of Price's nomination for HHS director, despite his stances that run counter to the organization’s positions. The AMA fully supports LGBT people, for example.