When President Lyndon B. Johnson signed the Immigration and Nationality Act of 1965 on Liberty Island, he had no doubt about the perniciousness of the law that it was replacing. The 1924 Immigration Act, which imposed a racist quota system favoring Northern European whites, was a "cruel and enduring wrong," a "harsh injustice" and "un-American in the highest sense," he said at the signing ceremony. 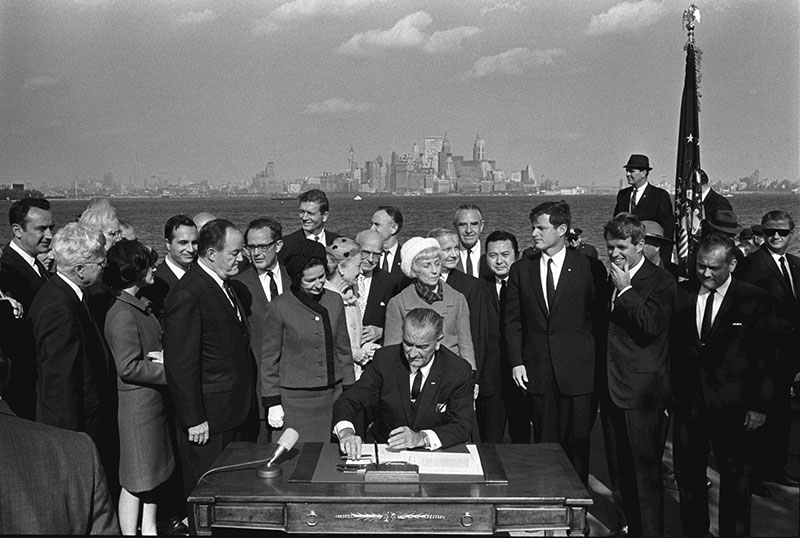 “We can now believe that [the 1924 law] will never again shadow the gate to the American Nation with the twin barriers of prejudice and privilege,” he said. He added that “the American Nation returns to the finest of its traditions today.”

In an October 2015 interview with Stephen Bannon, then the chief of Breitbart News and now Trump’s chief strategic adviser, Sessions praised the law and said that between 1924 and 1965 it had “created really the solid middle class of America, with assimilated immigrants, and it was good for America,” The Atlantic reported.

Very few people see it that way. The law was meant to keep out Southern and Eastern Europeans, who were seen as not really white. It was primarily pointed at Italians, Jews, Africans and Middle Easterners, but it also completely banned Asian immigration. Virtually all modern historians of the period agree that it was a racist law, and it was pushed early by American backers of Adolf Hitler’s Nazis.

As The Atlantic reported, its chief House author explained that it was meant to end “indiscriminate acceptance of all races.” Its main Senate author agreed, exulting that “the racial composition of America at the time is thus made permanent.”

But to Sessions, it was “good for America.”

Sessions’ opinion is, to quote Johnson, un-American. But it is right in line with Trump’s weekend executive orders on immigration, suspending all refugee admissions for 120 days; banning refugees from Syria indefinitely; and suspending for 90 days all travel from Syria and six other Muslim-majority nations. The move was a partial fulfillment of Trump’s campaign pledge to impose a “Muslim ban.”

Sessions’ celebration of the invidious 1924 law is not the only evidence of his harsh nativism. As chairman of the immigration subcommittee within the Senate Judiciary Committee, he has served as a bridge between the political mainstream and the three major anti-immigration groups created by John Tanton, who explicitly seeks an America with “a European-American majority, and a clear one at that.”

Sessions has regularly attended events put on by the Federation for American Immigration Reform (FAIR), whose leaders have long had ties to white supremacist groups and made many racist statements. (In fact, the current FAIR chief, Dan Stein, attacked the 1965 law signed by Johnson, saying that it was a matter of “revengism” by people who unfairly wanted to “retaliate against Anglo-Saxon dominance.”)

He is also very close to the Center for Immigration Studies, another Tanton outfit that has referred to immigrants as “Third World gold-diggers,” and a third group started by Tanton, NumbersUSA. He has received an award from the David Horowitz Freedom Center, an anti-Muslim group whose leader alleges that radical Islamists and leftists are working in league to destroy America. And he also received an award from the Center for Security Policy, whose Frank Gaffney regularly claims that radical Muslims have infiltrated the U.S. government.

Questioned during the first day of his confirmation hearing by Sen. Richard Blumenthal (D-Conn.), Sessions claimed to know little of the groups he had so long associated with, declining to return the awards from the Center for Security Policy and Horowitz’s group. But he did describe Horowitz repeatedly as “brilliant.”

Horowitz has accused a long list of those on the left, along with some leading conservative Republicans, of being agents of the Muslim Brotherhood. He has slimed enormous numbers of university professors who he deems too liberal. He has claimed that "between 150 million and 750 million Muslims" support war against Christians and others — a far cry from the 85,000-to-106,000 estimate made at the same time by terrorism expert Peter Bergen, after polling his colleagues.

Jeff Sessions has been widely criticized for only weakly supporting desegregation decades ago. But his record as a nativist in bed with some of the most hateful anti-immigrant organizations today, along with his views of immigration laws over the course of the 20th century, are reason enough to be very concerned about him at the helm of the United States Department of Justice.