“Lt. Governor Dan Patrick of Texas is taking off the gloves with those pushing the false narrative that protecting women and children will hurt the Lone Star state economically,” Perkins told listeners while introducing Patrick on the Feb. 8 edition of his “Washington Watch Live” web-based radio show.

“Yes, we are taking off the gloves,” Patrick responded. “We’re not going to stand by and allow the LGBT community to take over some business groups in order to attack our very common sense legislation to keep men out of ladies’ rooms, allow businesses the free enterprise to make those decisions, allow their customers to make those decisions, and to keep boys and girls from showering together in the 10th, 11th and 12th grade.”

In the short segment, Patrick dismissed claims that, should the bill pass, it would prove economically detrimental to the state. Both he and Perkins claimed SB6 has overwhelming support because it protects women and keeps boys and girls from “showering together.” 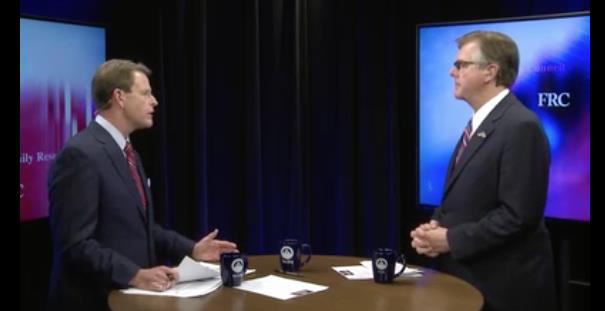 A common falsehood perpetuated by anti-LGBT groups is that allowing trans people to use restrooms in accordance with their gender identities will allow sexual predators to “pretend” they’re trans to access women’s restrooms and locker rooms to prey on women and children.

More recently, Patrick appeared live in the studio alongside Perkins in “Privacy and Freedom: Good for Business,” a webcast streamed from the FRC studios on Feb. 15. Perkins first spoke with FRC senior fellow in legal studies Cathy Ruse who claimed sex ed classes teach “transgenderism as a healthy alternative lifestyle” and cause psychological damage to children.

Next on the show was North Carolina Lt. Gov. Dan Forest who joined via video to discuss his state’s 2016 law, HB2, which was passed in a hastily called session in response to the city of Charlotte’s February 2016 anti-discrimination ordinance, which included sexual orientation and gender identity.

HB2 nullified all LGBT anti-discrimination ordinances in the state. Trans people who have not taken legal and surgical steps to change their gender markers on state documents have no legal right to use public restrooms that correspond with their gender identities. The law also makes it more difficult to pursue any claim of discrimination based on race, religion, national origin, handicap or biological sex.

During Patrick’s time with Perkins, he reiterated some of his statements from the Feb. 8 “Washington Watch,” claiming that Texas’s SB6 protects women and children from sexual predators, prevents boys and girls from showering together, and that predictions of harmful economic fallout as a result of the bill’s passage are dubious. The only people, Patrick claimed, who don’t support SB6 are “Anglo elite liberals, and a lot of them control the print media.”

Perkins directed viewers to a particular page on the FRC website which includes a link to the action center of Dan Patrick’s website where people share their stories about why they believe that “no Texas law should allow men in women’s restrooms or women in men’s restrooms.”

Patrick has promulgated the dangers of allowing trans people to use restrooms in accordance with their gender identities since his vocal support of the dismantling of the non-discrimination equal rights ordinance in Houston (HERO) in 2015. Patrick appeared on radio and TV urging voters to reject the city’s equal rights ordinance. HERO was overwhelmingly defeated in November 2015, largely on the basis of anti-trans fear mongering.

The Texas bill comes on the heels of Patrick’s battle against 2016 guidelines issued by the Obama administration in which trans students in public schools should not be marginalized to separate bathroom or locker room facilities or forced to use facilities inconsistent with their gender identities. Schools who discriminate against trans students could face federal lawsuits or a loss of federal funding.

In response to these guidelines, Texas attorney general Ken Paxton filed a lawsuit against the federal government in late May of 2016. A week later, Patrick announced that he would be directing all state school superintendents not to follow the guidelines and — in fact — to actively defy them.

Patrick’s crusade against allowing trans people to use public facilities in accordance with their gender identities and his association with hate group members continues. Patrick will also be speaking — along with Texas Gov. Greg Abbott, Texas Attorney General Ken Paxton and Perkins — at an FRC co-sponsored event in Austin, Texas on March 7, “Pastor’s Briefing at the Capitol,” billed as a “special briefing for pastors across Texas to hear urgent updates on legislation protecting women and children, religious freedom, and the future of our state.”