As President Trump is pressured to substantively respond to the rise in anti-Semitic incidents since his election, a new analysis reveals that Breitbart News under Trump's chief strategist Stephen Bannon fostered a comment section — a sample of Breitbart’s readership — that increasingly reflected language specific to the white nationalist “alt-right” movement, including anti-Semitic sentiment.

Comparing the language of Breitbart commenters to the language of the most aggressive far-right extremists online — e.g. language used by Twitter users who advocate for violence against minorities and are openly pro-Nazi — we can see a clear trend of increasing similarity over a three-year period, the bulk of it under Bannon. Bannon left Breitbart to join the Trump campaign in mid-August 2016 but the editorial focus of the site stayed the course he set it on. 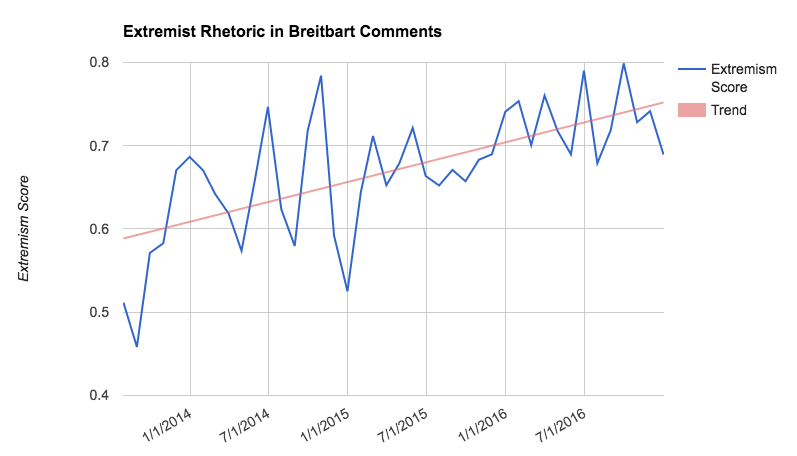 Diving deeper into anti-Semitic sentiment we see a similar trajectory. In early 2013, the term “Jewish” was used in a similar way as “white” or “black” as a racial/ethnic descriptor, which is similar to how "Jewish" is used in the mainstream press. By 2016 on Breitbart, however, “Jewish” had morphed into an epithet, used in similar contexts as “socialist” or “commie.” 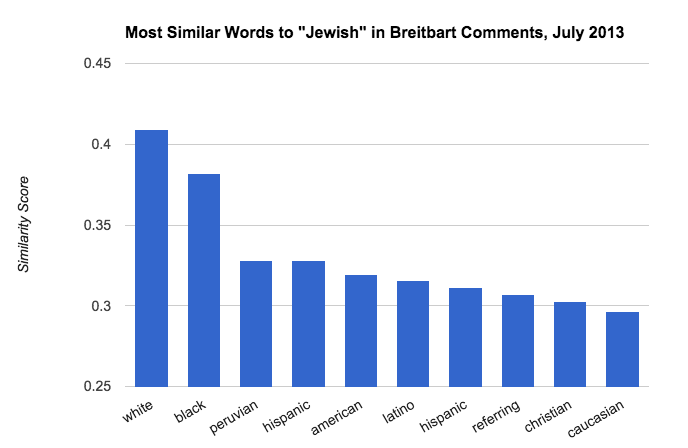 In a mainstream newspaper article, the word “Jewish” is statistically similar to words such as “Muslim” and “Christian.” This means that mainstream commentators usually rely on the word “Jewish” to describe someone or something religious. This was the case for Breitbart comments back in July 2013. 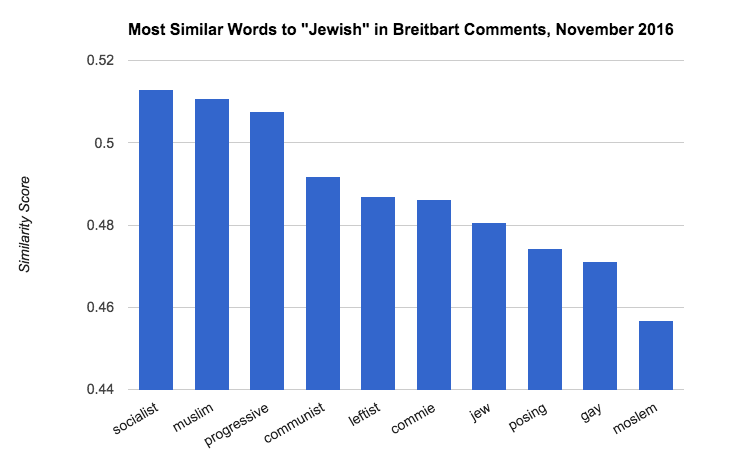 For far-right wing extremists, the word “Jewish” is used in a totally different context. Instead, its use is statistically similar to words such as“communist,” “homosexual,” “anti-white,” and “satanic.” Within Breitbart's comment section, "Jewish" was increasingly used in contexts similar to "commie" and "socialist" or even "progressive."

After Bannon was appointed as chief strategist, his record as a far-right propagandist came under increased scrutiny. Most contested by Bannon and his defenders was his August 2016 comments to a Mother Jones journalist that Breitbart became “the platform for the alt-right.”

Trump in an interview with the New York Times argued that Breitbart News was “just a publication.” Breitbart also went on the offensive. On November 19, Breitbart published “Steve Bannon: ‘Zero Tolerance’ for Anti-Semitic, Racist Elements of the Alt-Right.”

In the article, Bannon was summarized as saying:

Bannon also highlighted the diversity of views that were given a platform at Breitbart News, while also making it clear that both he and the site had “zero tolerance” for “racial and anti-Semitic” views.

Given the comment section analysis, however, it would appear Bannon and Breitbart’s tolerance for anti-Semitic views was higher than zero. It confirms what Ben Shapiro, a former Breitbart editor, said when he claimed that Bannon turned the comment section into “a cesspool for white supremacist mememakers.”

On this point, Breitbart editors have repeatedly attacked critics who connect the website to the anti-Semitic elements of the alt-right by pointing to Jewish writers on staff and their editorial embrace of far-right Israeli politics. It is Breitbart’s other coverage, however, that is most likely attracting these elements to the site.

A focus on “globalist elites,” traditionally an anti-Semitic dog whistle used by the radical right and a core appeal embraced by right-wing populists both in the US and in Europe today, was a “rolling narrative” covered extensively by Breitbart. One Breitbart London piece attacked Washington Post writer Anne Applebaum by calling her a “Polish, Jewish, American elitist” with “global media contacts” is the best example, which was roundly criticized as being anti-Semitic. Similarly, Breitbart’s undeniably inflammatory coverage of the migrant crisis and terrorism resonates with the hard right, which includes anti-Semitic fellow travelers.

Bannon, however, in an interview with POLITICO after the first wave of criticism started to die down in late December, again embraced Breitbart’s readership. As POLITICO reported, “Bannon said the best things about Breitbart are the comments section and the callers.”

“It was always great to hear what the hobbits had to say because at the end of the day, what they had to say was what mattered most. This whole movement, it’s really the top of the first inning.”