Breitbart News — a once unexceptional outlet in the right wing media constellation — became a leading voice in conservative media by 2016. Under the leadership of Stephen K. Bannon, it was an early booster of President Donald Trump’s campaign which in turn cited Breitbart more than any other source. Leaders of the white nationalist movement weren’t surprised.

Outlinks to Breitbart steadily grew over the course of 2016 on the most prominent white supremacist websites. By late 2016, Breitbart was regularly topping outlets like the UK’s Daily Mail, long favored for their sensational tabloid style reporting and breaking news, and on The Daily Stormer, the Internet’s premier neo-Nazi water cooler. 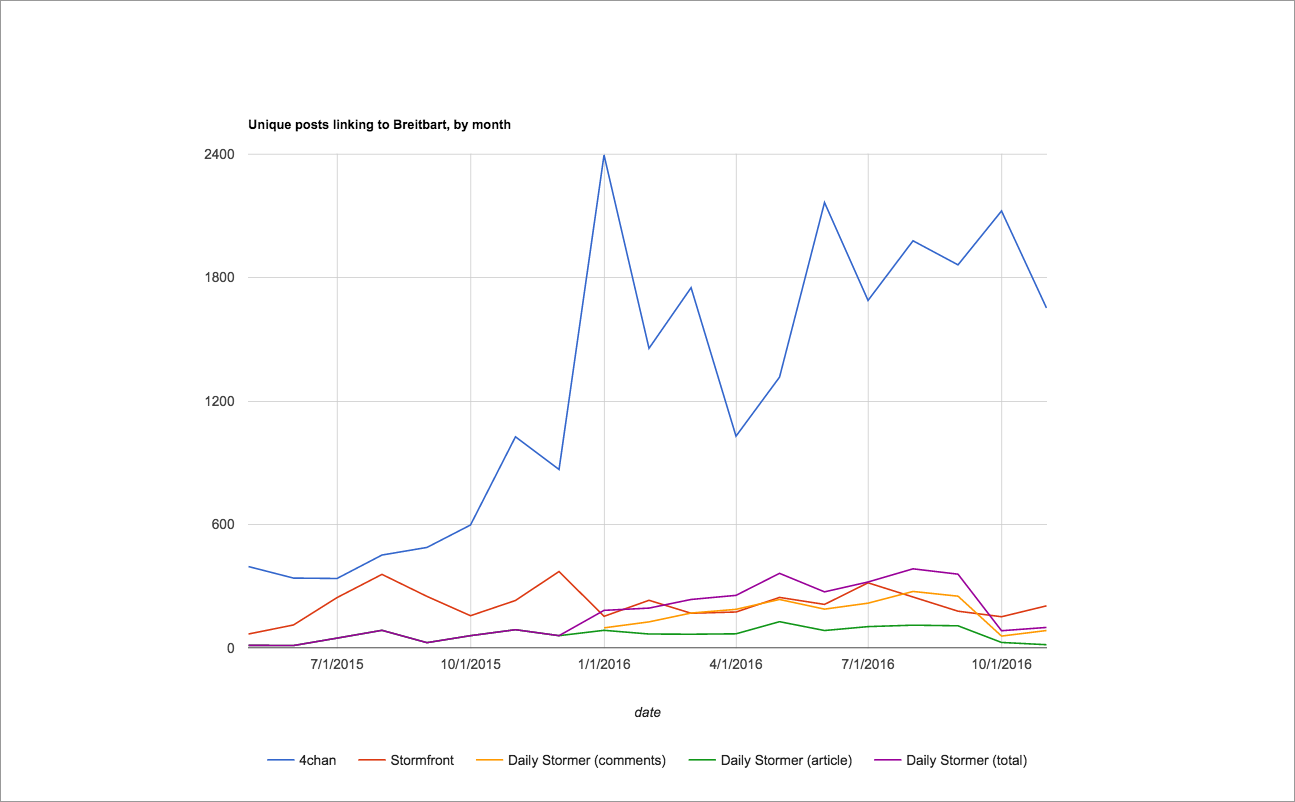 And the extremists are thanking Bannon.

“Breitbart went hardcore when he was running it,” Andrew Anglin, proprietor of The Daily Stormer told the hosts of Nordfront Radio, a Swedish neo-Nazi radio program, in November. “It is still hardcore now. It really changed from being this kind of basic c---servative type website to being this, I mean, the articles that they publish about blacks in America and about Muslims in Europe, it’s basically stuff that you would read on the Daily Stormer.”

Breitbart overtook the Daily Mail in July of 2015, the month that President Trump announced his bid for the presidency, as the most cited outlet by authors at the Daily Stormer. When factoring in outlinks found in the comment section of the website, it led through the 2016 presidential election. 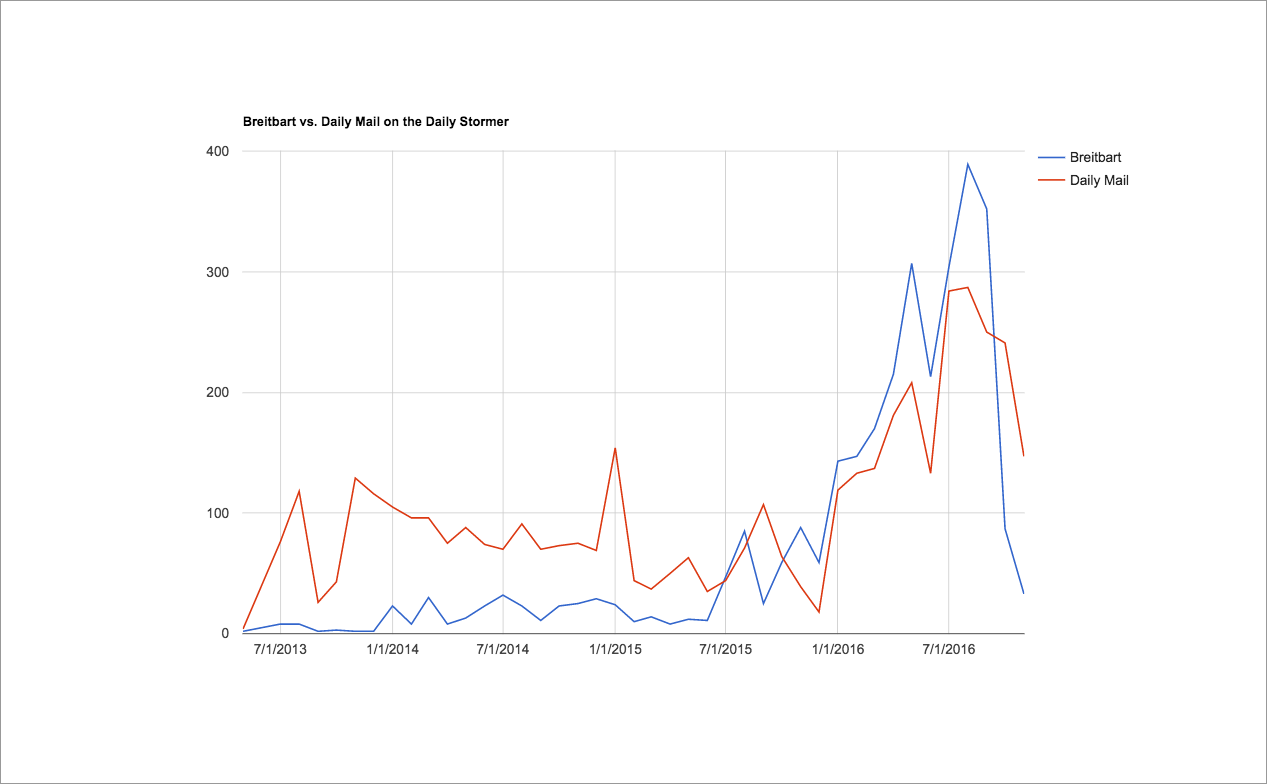 Breitbart’s popularity among readers of The Daily Stormer is unsurprising given that its lineage can be traced back to the cesspool /pol/ section of 4chan, a largely unregulated imageboard well-known for its tenacious far-right population. Anglin has identified the site’s /new/ section going “full nazi” as part of his ideological journey to neo-Nazism.

The story was seized upon by white nationalists around the world as evidence for their arguments against accepting refugees and immigrants into western countries. Radix Journal, Richard Spencer’s primary publishing organ at the time, labeled the event “The Rape of Cologne.”

Breitbart’s coverage of the tragic attacks, which did in fact involve a reported 80 victims, 35 of whom were sexually assaulted, portraying “thousands” of perpetrators exemplifies an editorial strategy of depicting the west as at war with radical Islam that was put in place while Bannon was at the helm of Breitbart.

Breitbart’s ascension hasn’t been ignored by longstanding leaders on the far right who have reacted with shock at the resemblance its editorial bent has to their own.

“Imagine for a moment what it looks like from our perspective,” Brad Griffin, proprietor of Occidental Dissent wrote. “You write for a pro-White website like the Council of Conservative Citizens, AmRen, or VDARE, you have been labeled and stigmatized as an ‘extremist,’ ‘notorious racist’ and a ‘member of a hate group,’ and when you wake up in the morning and look for the subject to write about, say a refugee rapist, you realize that it is semi-pointless because UK Daily Mail or WorldNetDaily has already covered it. What is there left to do but link to the Breitbart story?”

Griffin attributes this shift to a “California Gold Rush of clicks” that has driven journalism outlets desperate for ad revenue to look for increasingly extreme and polarizing topics to cover. It’s notable that while an outlet like the Daily Mail may have initially covered the story, Griffin and his compatriots prefer the editorial styling of Breitbart.

“I think Breitbart has had a positive impact on our culture and politics,” Griffin wrote in January. “It is unwittingly engaging in what I call ‘discourse poisoning’. I assume the profit motive is at work here – anyway, it benefits us to erode taboos, so I don’t really care how much money they make. You could also say that we can look at Breitbart as a model that those of us who are further to the Right ought to be doing instead of writing history lectures or boring essays about obscure philosophers no one cares about.”

James Kirkpatrick took a similar stance at VDARE last Fall, writing, “The Truth: Breitbart is not ‘extreme’ – even the best journalism at that site just recycles the same material VDARE.com has been pushing for more than a decade.”

Stormfront, the extremist right’s most trafficked site until last summer, also saw a shift towards Breitbart from its users. Although it never surpassed the Daily Mail, Breitbart surged beginning in July of 2015, just as it did on The Daily Stormer. While sites like YouTube, Wikipedia, and Twitter dominate Stormfront, as well as The Daily Stormer, the Daily Mail held the title of most referenced news outlet. 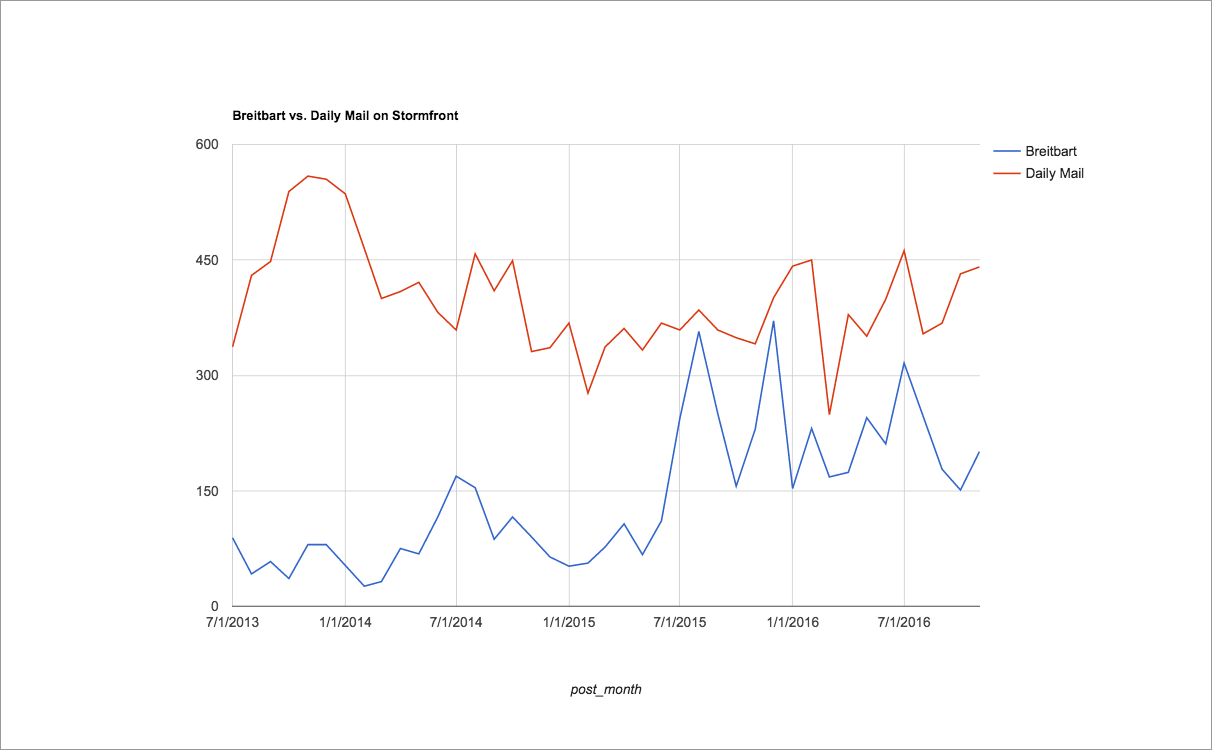 The Daily Stormer also preferred the Daily Mail to all other news services, rounded out its top three sources with the Daily Mail and RT, the Russian government’s international television network. This held true for the sites commenters as well.

Bannon, who took an indefinite leave of absence on August 17, 2016, to become the CEO of the Trump presidential campaign, told a Breitbart news editor in 2014 to, “Let the grassroots turn on the hate because that’s the ONLY thing that will make them do their duty,” referring to Republican leaders.

His editorial vision demonstrably mobilized a different grassroots, one that is fighting for a white ethnostate and, in many cases, another Holocaust. Their hate is real and thriving.