“Breitbart is a company staffed almost entirely by Jews,” said Milo Yiannopolous last November when asked about accusations of anti-Semitism made against his former boss, Stephen Bannon. “I am a gay Jew, and he made me into a star.”

In the past, Bannon and Yiannopolous were closely aligned. During Bannon’s tenure as executive chair of Breitbart News he hosted Yiannopolous — once the site’s senior tech editor — at least 20 times while anchoring the Breitbart Daily News satellite radio show.

During those appearances, Bannon repeatedly lavished praise on Yiannopoulos, comparing his courage to that of Winston Churchill and his provocative commentary to that of Breitbart’s late founder, Andrew Breitbart. Bannon also lauded Yiannopolous as “one of the leading voices of his generation in this whole fight against cultural Marxism, the defense of Western Civilization.”

Both “cultural Marxism” and “western civilization” are terms frequently used by white nationalists to soften the racism and xenophobia at the heart of their ideology.

“Every time you write one of your commentaries it gets 10,000 comments. It goes even broader than the Breitbart audience, all over,” Bannon told Yiannopoulos during the February 12, 2016 broadcast. “But one of the things I read in the comments is that people come in, a lot, a significant portion … that are not your fans and the first thing they say is, “This is hate speech. He’s a hater. He ought to be shut down.” I read the stuff, I’m pretty open-minded, and I don’t really see the hate.”

“I’ve gone to enough sites where I see raw hate. I know what it looks like and I don’t see it,” Bannon continued. “Yours is sharp, pointed, take no prisoners, ask for no quarter and give none. It’s very Andrew Breitbart-ian, which was not hate.”

Yiannopoulos, who resigned from Breitbart in disgrace Tuesday over comments he made about pedophilia, was best known for headlines like, “Muslim Gang Rapists are Springing Up Everywhere. Why can’t we be honest about it?” and “’S---’s Remorse’ is Why Rape Suspects Should be Anonymized.” 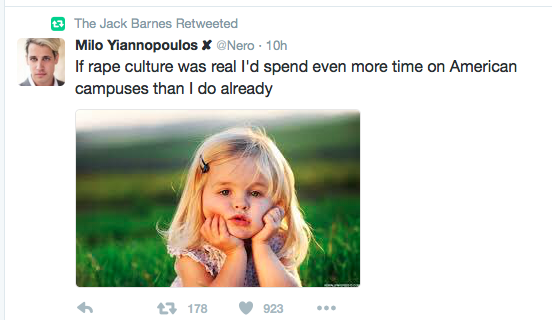 The attack on Yiannopoulos came after he was tapped to deliver the keynote address at the conservative CPAC conference. An anonymous Twitter account called the “Reagan Coalition” repackaged and promoted old video footage that had previously circulated. That attack from the right proved to be too much for Yiannopoulos, who was swiftly disinvited from CPAC and then lost his book contract with Simon & Schuster.

Yiannopoulos is best known for his “Dangerous F-----” Tour where he visited dozens of campuses ostensibly advocating for free speech. This was in conjunction with extremist David Horowitz who has organized far-right attacks on colleges across the country. The reality was much uglier as Yiannopoulos most frequently used his platform to denigrate Muslims, lament the progressive lean of American college campuses and — in at least one instance — openly bully a transgender student at UW Milwaukee.

His efforts received praise from Bannon last May, who gushed on air that, “No one except for Andrew Breitbart has ever gone on to college campuses and attacked the beating heart of the mindset of the institutional left like you have.”

Perhaps the duo’s most telling exchange from the same February 12 broadcast came when Bannon and Yiannopoulos congratulated each other for a robust comment section renowned for its racism and vitriol.

Yiannopoulos: “You get the sense that some conservative writers are sort of looking to the left for approval. “Is this okay? May we say this? Is this racist? Is it okay? Can we say this? Are we being sexist?”

Bannon: “We try to push the envelope everyday. As you know, I’m more apt to let stuff go just for the simple reason that I’d rather have it edgy and have people respond to it than to cut your own shot beforehand, right?

Y: Breitbart does a uniquely good job of that, not to blow our horn too much.

B: No, I mean, this how we get six million comments a month. We’re trying to elicit that response from an audience, right? By the way, the comment section of Breitbart is not the place for …

B: “… if you’re a precious flower out there folks, do not go. Trust me. By the way, some of the sites are setting up guidelines; you can’t say stuff about the writers. If you don’t like the writers, have at it, dude. Tell ‘em what you think.

Y: “Absolutely. And we of course love that at Breitbart and you’ve certainly inspired the spirit of contest.”

B: “I mean look, the whole staff are people like you, people with tough skins.”

Yiannopoulos also notably penned Breitbart’s alt right primer with fellow Breitbart Tech reporter Allum Bokhari, titled “An Establishment Conservative’s Guide to the Alt Right,” which was criticized by both the left and the far-right for whitewashing the nascent ideology’s racist core tenets.

Presciently, during Breitbart News Daily’s New Year’s Eve broadcast in 2015, Yiannopoulos told Bannon, “I always say that the best response to outrage culture is to be outrageous. And those of us who are being outrageous are becoming phenomenally successful as a result. … There are a lot more ordinary, decent people who like to crack a joke and don’t want to lose their job because they made a joke one time, who realize that this horrible hectoring policing of peoples’ language and lies, and this reliance on imagined confected grievances is not a way to run a healthy respectful civilization.”

Apparently, outrage and “ordinary decent people” have their limits.

Rose Falvey contributed to this article.