Before the Olathe shootings and the Garden City bombing plot, the region was saturated with Islamophobic rhetoric amid the 2016 election.

Shocking hate crimes like the recent shootings of two Indian men in a restaurant in Olathe, Kansas, often seem to come out of nowhere. But in reality, they emerge not from a vacuum, but always from an environment that encourages and fosters this kind of violence.

Wednesday’s shooting in the Kansas City suburb by a white man who had been shouting racial slurs at the victims and later told a bartender he had shot “two Iranians,” left Srinivas Kuchibhotla, 32, a Garmin engineer from Overland Park, dead and his co-worker, Alok Madasani, 32, as well as Ian Grillot, 24, who attempted to intervene, critically wounded.

The shooter, a former air traffic controller named Adam Purinton, 51, shouted at his victims: “Get out of my country!” The FBI is investigating the case as a hate crime, though Kansas has no hate crime statute.

The shootings set off shock waves in India, where many families have members working and living in the United States under similar circumstances.

Kuchibhotla’s brother-in-law, Venumadhav Gajula, told the Los Angeles Times that he blamed the shooting on “a growing climate of racial intolerance in the United States.”

Certainly, the climate in Kansas, as well as in neighboring Missouri, where Purinton was arrested, reflected just such a growing intolerance. In the months leading up to the election, the Kansas City region’s political scene became ratcheted up into high rhetorical gear for the November vote, and produced campaign appeals notable for their violence-drenched Islamophobic fearmongering.

The most noteworthy of these was a series of mailers from the state Republican Party that went out to voters in the final weeks of the campaign making undisguised appeals to people’s fears that radical Islamist terrorism might overwhelm Kansas. 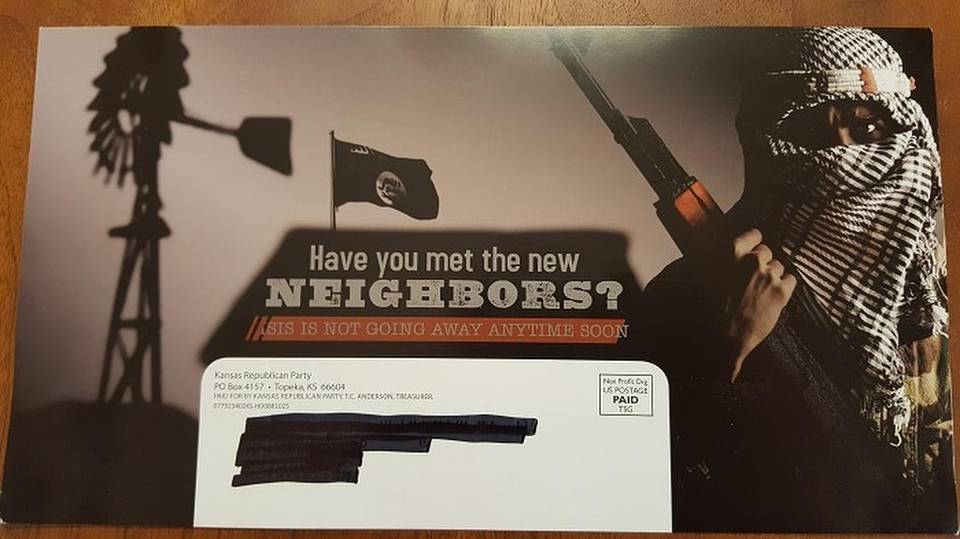 “Have You Met the New Neighbors?” read the bold letters on the envelope of one mailer, next to an image of an apparent Muslim terrorist. “ISIS is not going away anytime soon,” read the envelope’s script. 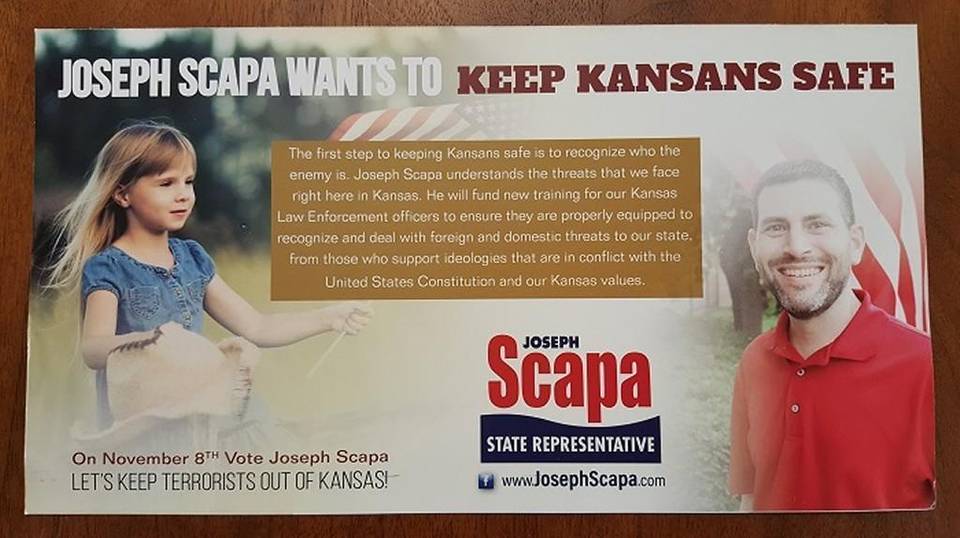 This GOP mailer promoted the candidacy of Joseph Scarpa with the promise to keep terrorists out of Kansas.

Another mailer featured a script promoting candidate Joseph Scapa for a state House seat, saying he “wants to keep Kansans safe.” Next to an image of a young girl waving an American flag, it explained: “The first step to keeping Kansans safe is to recognize who the enemy is. Joseph Scapa understands the threats we face right here in Kansas. He will fund new training for our Kansas Law Enforcement officers to ensure they are properly equipped to recognize and deal with foreign and domestic threats in our state, from those who support ideologies that are in conflict with the United States Constitution and our Kansas values.”

It concluded: “Let’s keep terrorists out of Kansas!” 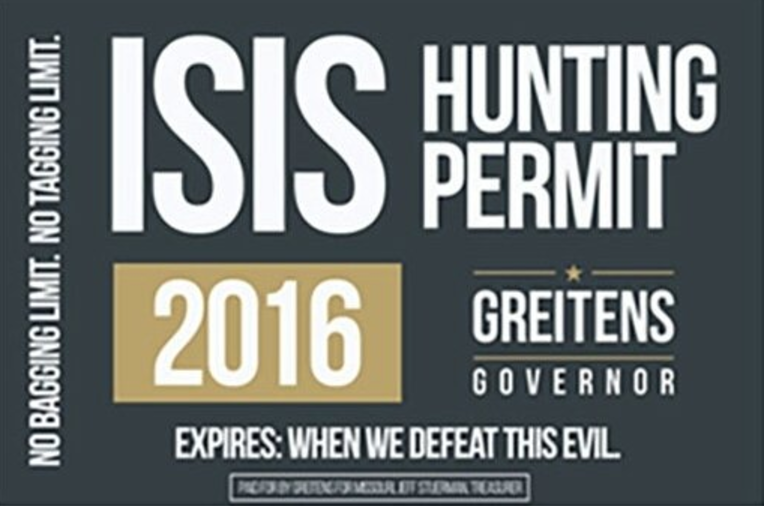 The 'ISIS Hunting License' offered as a campaign stunt by Missouri's newly elected governor, Eric Greitens, during the 2016 campaign.

Another mailer featured an envelope with a similar scared-child script: “What is ISIS? Will they hurt me?” And one of the GOP mailers was an attack on a Democratic opponent, suggesting that “Democrats support moving terrorists to Kansas!”

Meanwhile, in Missouri, another campaign appeal – by the man ultimately elected the state’s new governor, Eric Greitens – featured an even more violent suggestiveness.

In July, Greiten began issuing “ISIS Hunting Permits” marked to expire “when we defeat this evil” as a campaign fund-raising item. A former Navy SEAL officer, Greitens sold the stickers for $10 donations, while for $100, donors would get a sticker signed by another former SEAL who claimed he killed Osama bin Laden.

"All of these people who are out there, they want to join our mission," Greitens told reporters. "They want to become part of the team- part of the campaign- and we thought this would be a fun way to let people know about my biography and that we all need to stand together against terrorism.”

At the time, Faizan Syed, the Counsel on American Islamic Relations in Missouri’s executive director, warned that Greitens’ message could be easily twisted into violence. "The problem is with his target audience. Amongst them are radicals in this country who don't know the difference between the two [Muslims and radical Islamists]," said Syed.

"Those are the people who we have to be worried about when they get a bumper sticker saying 'here's your permit to attack ISIS'. When they see a woman at Walmart with her children and they say, 'this looks like ISIS, I'm going to attack ISIS,' that is when the real trouble begins," he added.

In October, the Islamophobic paranoia bubbled up into the real world in Kansas when three men from Dodge City were arrested and charged with plotting to murder hundreds of Muslims on the day after the election by setting off truck bombs in a Somalian community in Garden City. The men were part of a militia group that regularly traded in Islamphobic paranoia, reflected in their own words, as captured by the FBI on tape:

“The only f------ way this country’s ever going to get turned around is it will be a bloodbath and it will be a nasty, messy motherf-----. Unless a lot more people in this country wake up and smell the f------ coffee and decide they want this country back … we might be too late, if they do wake up … I think we can get it done. But it ain’t going to be nothing nice about it.”

Afterwards, local officials worked hard to restore a sense of normalcy with their Somalian refugee neighbors.

“The only answer I can give you about why this happened is that they wanted to attack your religious beliefs,” Garden City Police Chief Michael Utz told community leaders. “But you need to know that whether you are an immigrant or not, you are all Garden Citians.

In the Kansas City area, both Indian and Muslim minorities are struggling with fears about their safety in the United States. "Everybody's going to be extremely cautious," said the Indian owner of a local jewelry store. "I think it's going to take time for this to settle in."

Meanwhile, in India, students are reportedly rethinking their plans to come to work in the U.S. "I used to think of America as a place where there is greater racial equality than exists in India," 26-year-old Dhriti Ahluwalia told the Washington Post. "Now people are afraid. There is inequality. There is racism."