Three members of a southwest Kansas militia dubbed the "Crusaders” were arrested Friday on charges stemming from a plot to attack a housing complex that houses a mosque in Garden City, Kan.

Curtis Allen, 49, Gavin Wright, 49, of Liberal, Kan., and Patrick Stein, 47, a resident of a nearby Dodge City, Kan., had stockpiled firearms and explosives. They planned to use four explosive-laden vehicles parked at the corners of the complex, which is home to a number of Somali immigrants, officials said during a news conference.

The group, which called itself the “Crusaders” had prepared a manifesto in which they said they hoped their attack, scheduled for the day after the General Election, would “wake people up,” Tom Beall, acting U.S. Attorney for the District of Kansas, said.

A confidential source attended meetings of the group and provided the FBI with information about the defendants’ activities. The criminal complaint alleges that the men conducted surveillance to identify potential targets, stockpiled firearms, ammunition and explosive components, and planned to issue a manifesto in conjunction with the planned bombing.

According to the complaint, Stein said:

“The only f------ way this country’s ever going to get turned around is it will be a bloodbath and it will be a nasty, messy motherf-----. Unless a lot more people in this country wake up and smell the f------ coffee and decide they want this country back … we might be too late, if they do wake up … I think we can get it done. But it ain’t going to be nothing nice about it.”

The criminal complaint release also stated that the “Crusaders” was synonymous with an antigovernment group called the Kansas Security Force (KSF). The KSF shares a name with a much larger antigovernment coalition called the Three Percent Security Force, which claims to have chapters in numerous states and takes its name from the disputed claim that only three percent of American colonists fought the British. The leader of the Three Percent Security Force is the Georgia-based Chris Hill, who goes by the name “General Bloodagent.”

“Govt may kill or detain me. I am GENBLooDAgenT. Cover me. – Domestic Terrorist. We are better Martyrs … I am HoLYWaR.”

Hill, who also serves as the Georgia chapter head, told Hatewatch that his group is “associated” with one KSF group, but that there are multiple. Hill stated that the group he is associated with is run by Ronald Greek, but Hill claimed he only talks to Greek “one time a year.” Hill went on to say that he was not familiar with any of the three men arrested in Kansas today. 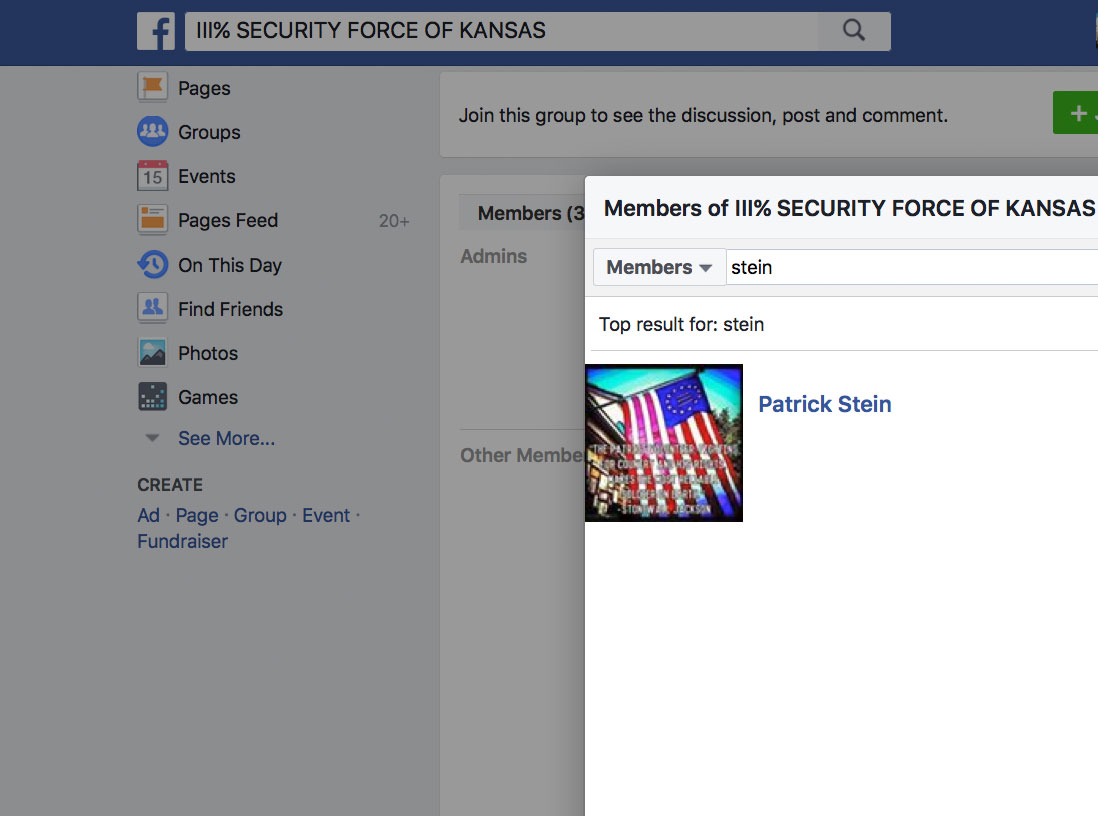 Though it is unclear to what extent these groups are tied to Hill’s coalition, both share rabidly anti-Muslim views, which have increasingly become commonplace in the antigovernment movement. Hill’s chapter, for example, has been in the news as of late for their open opposition to the proposed construction of a mosque in Covington, Georgia. In September, Hill’s group forced the cancellation of a county meeting set to discuss the construction of the mosque. Commissioners claimed “uncivil threats” from Hill’s group prompted their cancellation. In an interview with media, Hill stated, “Right over there this is going to be a future ISIS training group. This is where you’re going to see terrorism taking hold in Newton County.”

Allen, Wright and Stein appear to have targeted the apartment complex because it was home to a number of Somali immigrants. The targeting of refugees and those institutions helping to settle refugees has been on the rise in recent years.

According to an affidavit filed in the case, the men repeatedly referred to Somalis as “cockroaches,” claiming that the apartment complex was “full of goddamn cockroaches.” On one “patrol” of the area, Stein screamed out the window at Somali women in traditional garb, “f------ r------ b------!”

Stein, in particularly, left a hate-filled footprint on social media, where he frequently posted about Muslims.

In July of this year, Stein wrote a lengthy screed filled with anti-Muslim and antigovernment rhetoric. He claimed the Muslim Brotherhood has infiltrated the White House, a common conspiracy theory most notably touted by Frank Gaffney, head of the anti-Muslim think tank Center for Security Policy (CSP). Stein also called Muslims “cockroaches” and claimed, they "are provided more assistance and privileges than our vets are provided.”

"I'm angry that our politicians are no good, lying, caniving, crooked, corrupt, treasonist, a------- that should be imprisoned at the least...I'm angry we allow one of the most corrupt, deceitful, lying, caniving, treasonist, POS (Hillary Clinton) on the planet to run for president while under investigation by the FBI...I'm angry that elections are rigged by the elitist (FYI: YOUR VOTE DOESN'T MATTER ANYMORE)”

The arrests cap an eight-month investigation led by the FBI involving several confidential informants. On Oct. 12, according to a Justice Department news release, Stein met with one of those informants in rural Finney County, Kansas. There, they test fired automatic weapons before visiting the apartment building, where Stein told the FBI source he would provide money for the attack ammonium nitrate for the bomb –– the same component Timothy McVeigh used in the 1995 to bomb the Alfred P. Murrah building in Oklahoma City.

The men also contemplated attacking churches that have supported the relocation of refugees, court documents show. In one conversation, Stein said, “That mother f----- needs burnt to the ground.” Other potential targets included city/county commission meetings, local public officials, landlords who rent property to Muslim refugees and organizations providing assistance to Muslim refugees. These locations were plotted out on Google maps and labeled “cockroaches.”

Stein also seemed to have been particularly motivated by the death of Robert “LaVoy” Finicum, the spokesman for the antigovernment occupation of the Malheur National Wildlife Refuge earlier this year. Police shot and killed Finicum as he reached for a pocket containing a handgun after trying to speed past a police road block in January. Since his death, Finicum has become a martyr to the nationwide antigovernment movement.