In 2011, the New York Times profiled David Yerushalmi, an anti-Muslim extremist and the go-to lawyer for the movement at large.

Yerushalmi, who's advocated for the criminalization of Islam, developed a campaign to push states to adopt legislation that would expressly prohibit judges from consulting sharia, Islam’s legal framework.

Nine states followed suit by 2015, tweaking the language to cover “application of foreign or religious law in state courts” in order to dodge obvious constitutional issues.

But for Yerushalmi, the goal was never legislation:

Fortunately for Yerushalmi and other anti-Muslim propagandists, when people ask ‘What is shariah?’ they ask Google.

A recent Observer investigation by Carole Cadwalladr revealed how searches about Jews on Google would immediately steer users toward Holocaust denial content and neo-Nazi sites like Stormfront, which appeared for a time as the top result for “did the Holocaust happen?”

A similar problem exists when using Google Search to find information on Muslims and sharia but it's arguably worse.

Worse because, as we'll see, factual content about Islam and sharia in basic searches often gets choked off by anti-Muslim propaganda. Particularly once the search is narrowed (down from Yerushalmi's heuristic) we encounter a near total Search Engine Optimization (SEO) dominance of anti-Muslim sources and fake news sites.

First, a simple search for “What is sharia” returns the following: 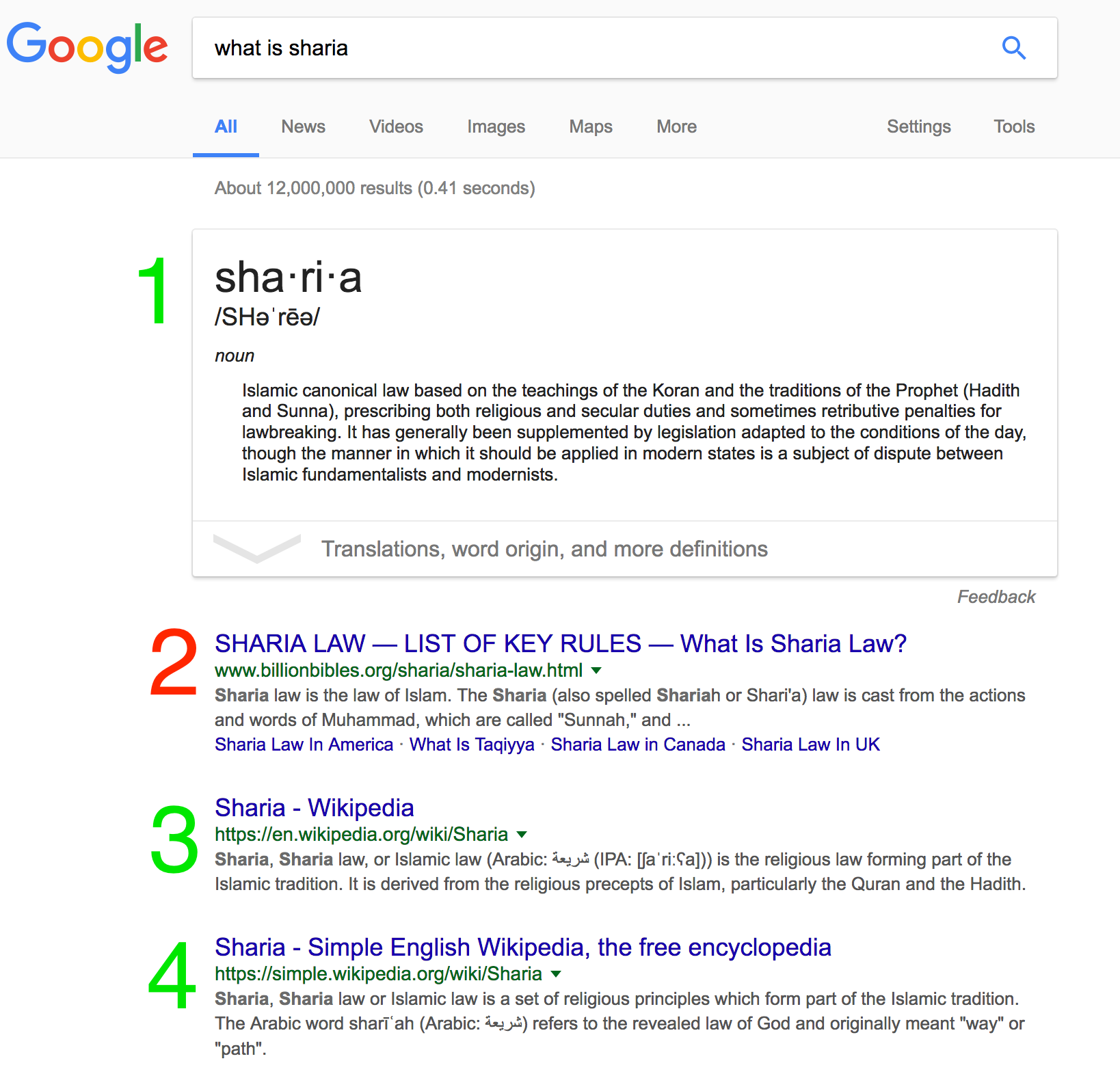 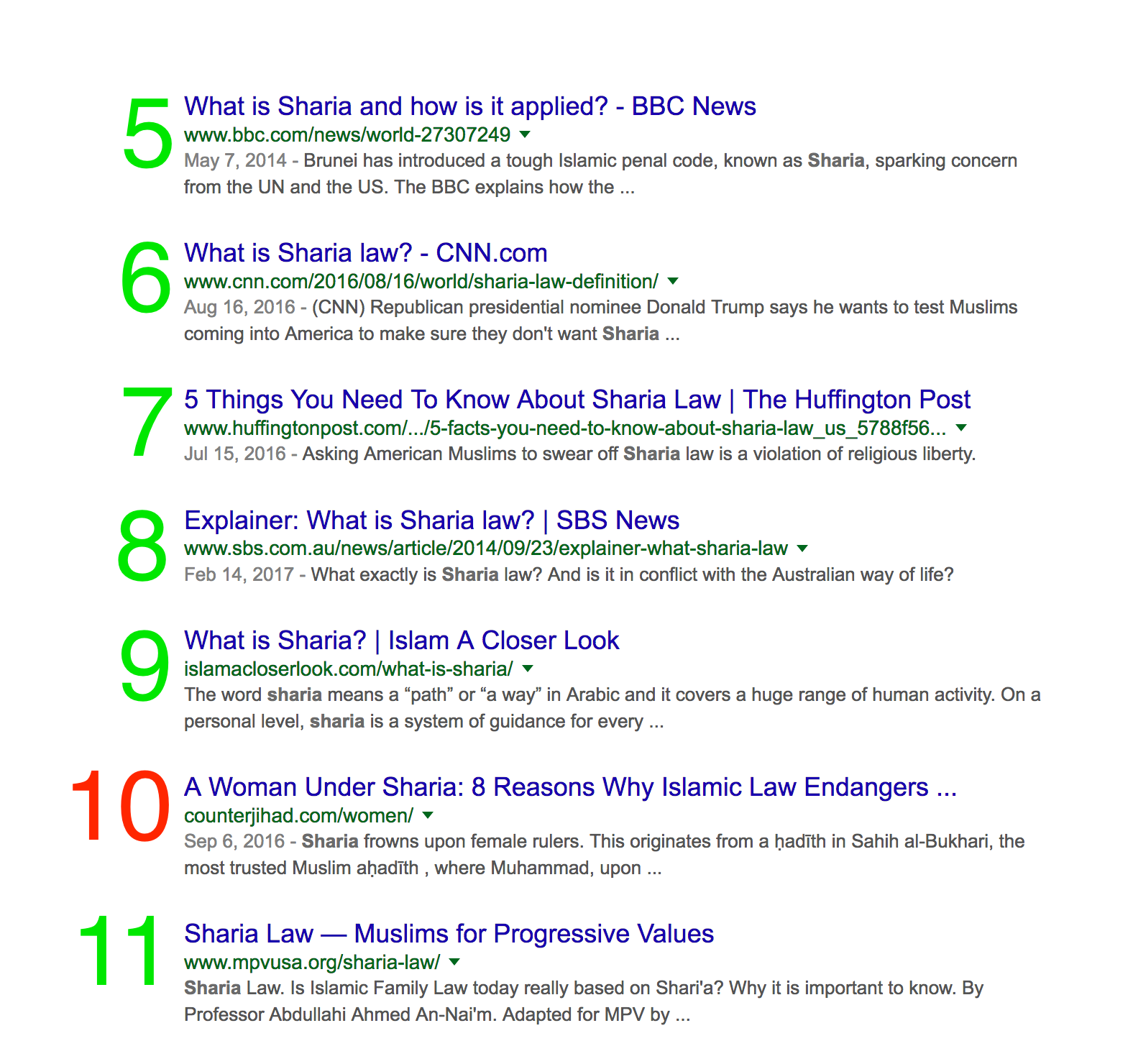 The top pop-out definition is a result from Google’s “Knowledge Graph,” or semantic search. Launched in 2012, Google’s Knowledge Graph serves up quick facts, outside the list of links, “connected” to the user’s query. Based on millions of searches and a growing database of such facts—70 billion at year's end—Google thinks it’s most useful to present as a first result a basic dictionary definition of sharia.

Overall here, the results are pretty good. We do get a CounterJihad.com link and a very high ranking for BillionBibles.com. This low-budget but inflammatory site features a list of violent punishments contained in sharia, adorned with an image of an amputated hand and a Koran, and links out to other pages labeled “Stop Islam” and “Spread of Islam.” BillionBibles.com appears in numerous searches relating to Islam and sharia. The site provides very little value.

But should a user be located in a state where an anti-sharia bill is making progress in the state house, a natural next question might be about sharia's "compatibility" with US laws, the constitution in particular (in fact, the alleged incompatibility of Islam generally with the US and western civilization is a perhaps the defining argument of anti-Muslim thinkers and propagandists of varying stripes). In this case, Google tells a different story: 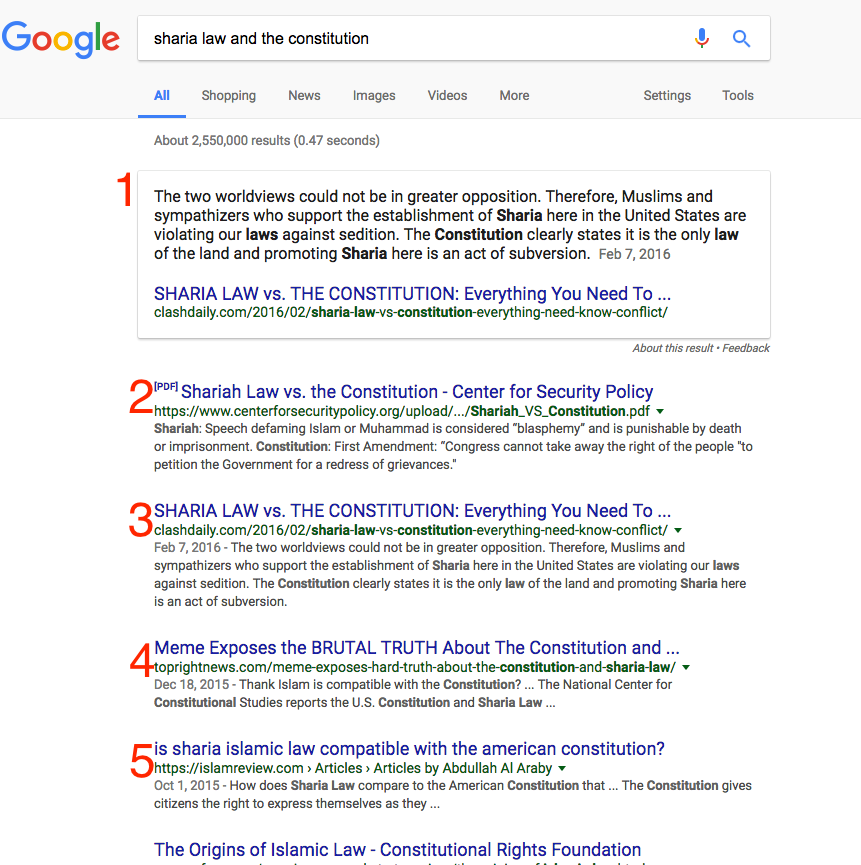 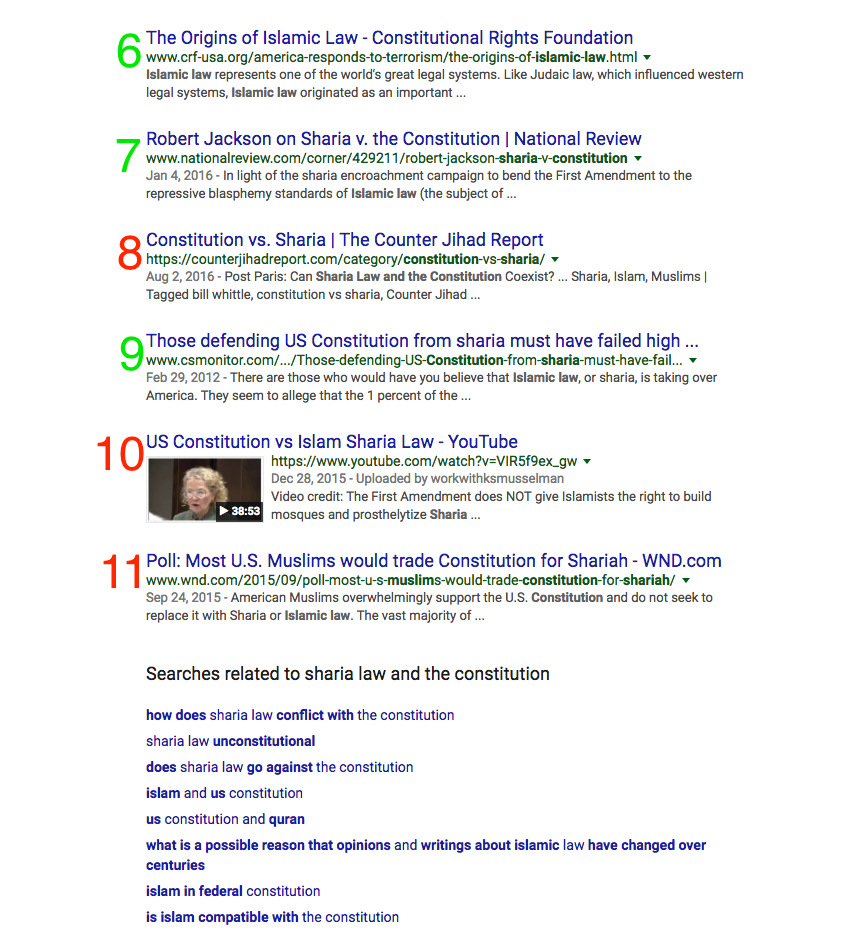 On this search, the top result is what's called a Featured Snippet which is pulled not from Google's Knowledge Graph but a third-party website. This still gives a user the sense of a Google-preferred — and therefore reasonably authoritative — result.

In the above example, the fake news site ClashDaily.com gets top billing. The next result is a PDF from Frank Gaffney's Center for Security Policy (CSP), where Yerushalmi is general counsel. Gaffney, who has accused everyone from the National Rifle Association to the Obama administration of being infiltrated by the Muslim Brotherhood, is a notorious anti-Muslim bigot. Looking down to the eleventh result we find the even more conspiratorial WorldNetDaily (WND), ground-zero of the racist birther lie.

Replacing "sharia" with "Islam" we get a similar crop of propaganda and fake news: 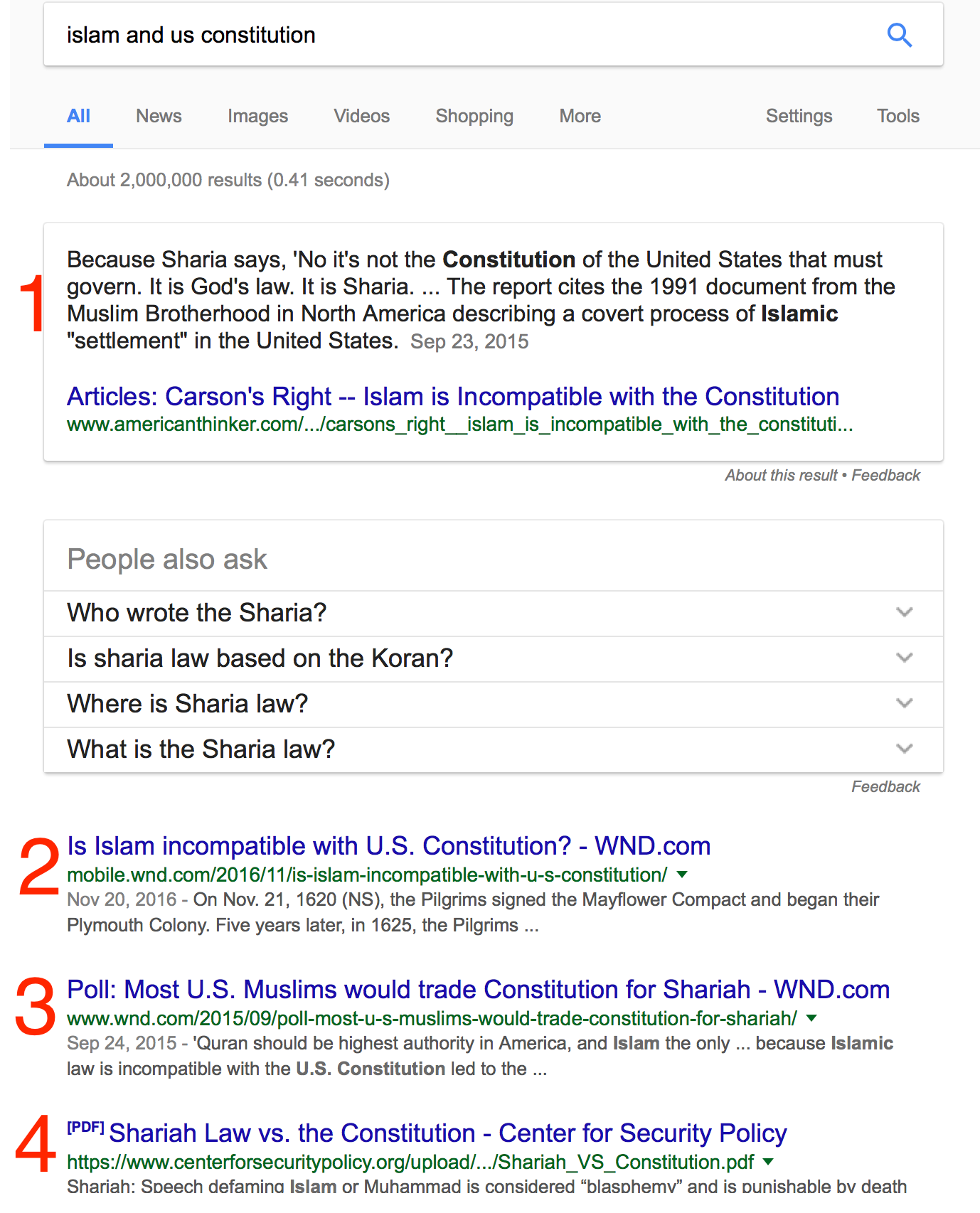 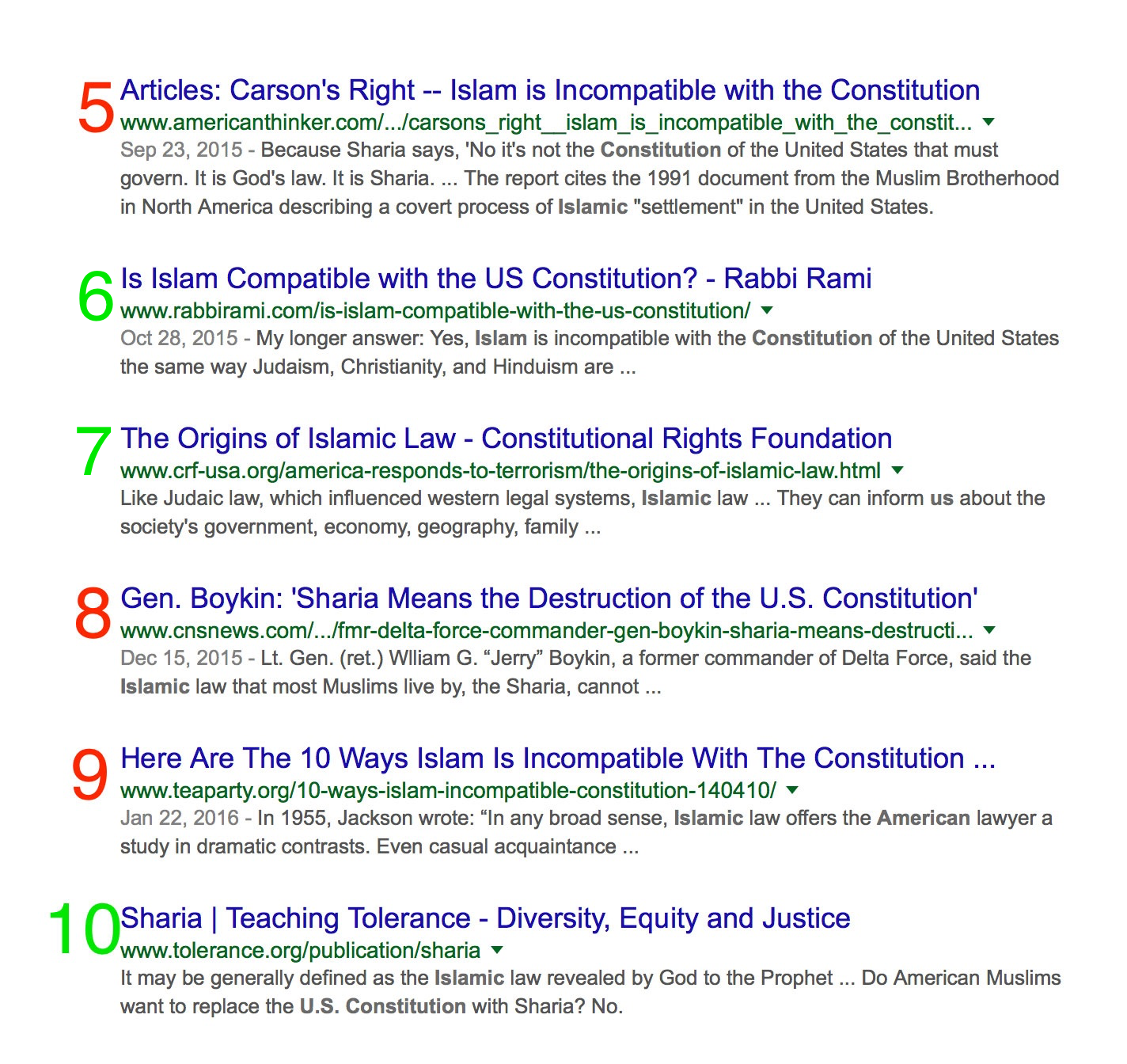 The top result is from the American Thinker, a far-right and often incredibly racist site. For hate groups we get CSP again and a story featuring Lt. Gen. William G. "Jerry" Boykin, the anti-LGBT Family Research Council's in-house Islamophobe. Some of these groups are part of the well-funded anti-Muslim propaganda network, including anti-Muslim extremist and Breitbart contributor David Horowitz whose "Discover The Networks" site also often appears in Google's "People also ask" results, with very benign sounding entries: 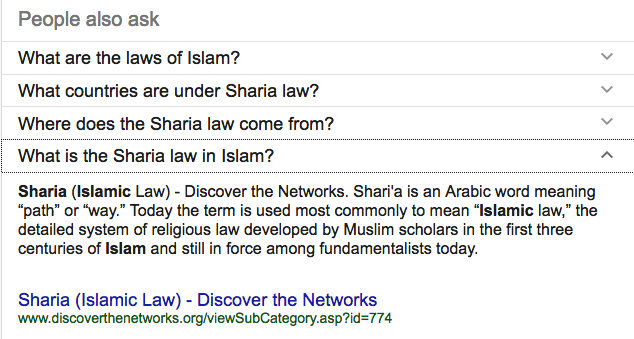 While all the results above are certainly relevant to the search, they contain inflammatory content meant to convey a threatening conspiracy of "creeping Jihad" and reliably demonize Muslims. This is a message that continues to find fertile ground in the United States where the threat of terrorism has so consumed the national imagination. As two former Obama administration foreign policy staffers wrote in the New York Times this past weekend:

Whatever the explanation, our intense focus on terrorism has helped spawn a veritable counterterrorism industrial complex, made up of new government agencies, private firms and an army of well-funded experts, who keep the issue atop the national agenda.

As a result, without much empirical rationale, concern about terrorism is rising: Today, 80 percent of Americans reportedly consider terrorism a “critical threat,” compared with less than 60 percent citing North Korea, which may soon be able to strike the United States territory with a nuclear missile.

The success of the anti-Muslim extremist propaganda arm of this industrial complex can be measured in part by Google Search. Since early 2015, Snopes, the site dedicated to debunking internet rumors, has debunked a major rumor involving sharia on average about once every other month.

"One of the most striking things about the stories about Muslims and sharia law and Islam in general is how persistent the misinformation is," said Brooke Binkowski, an editor at Snopes. "The same exact stories get circulated with different names and slightly different details, every few months. If you look at some of the stories we've done you can probably see some of the updates to them, indicating how often they resurface. They are nasty and pernicious."

Following the uproar surrounding Cadwalladr's reporting, Google did tweak its algorithm to sink Stormfront in Holocaust-related searches, but it appears not to have stayed that way. The SPLC has also highlighted the radicalization of Dylann Roof as an extreme consequence of allowing hate groups to so easily manipulate Search and surface their propaganda. The threat of dedicated extremists and propagandists to warp public opinion and individuals susceptible to their messages is real.

In statements, Google repeats that it "was built on providing people with high-quality and authoritative results for their search queries." In the case of sharia and Islam, the company is simply not keeping up.