This post is part of a continuing Hatewatch series examining the Newslinks & Articles section of Stormfront.org. Until last summer, Stormfront was the most trafficked white supremacist website online. 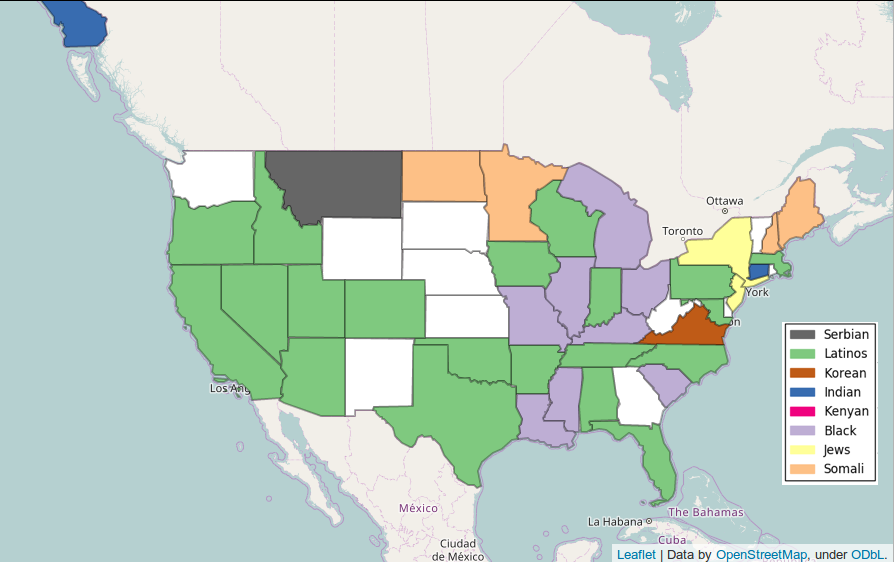 White represents states with data that was either insufficient or could not be reliably disambiguated (i.e. Washington and Georgia).

Hatewatch calculated the correlation between mentions of each U.S. state and ethnic or religious groups by analyzing how frequently they co-occurred within Stormfront posts. The higher the correlation, the more frequently that ethnic group and that state tend to be discussed together.

Four states — Minnesota, North Dakota, Vermont, and Maine — were most frequently mentioned in the context of Somalis. All four were in the top 10 states for refugee resettlement per capita in 2016. Somalis make up one of the largest refugee populations in the United States. According to the U.S. Department of Homeland Security and the U.S. Department of State’s Refugee Processing Center, 10,786 refugees were resettled in 2016.

Somali refugees are also some of the worst victims of the xenophobic, far-right media machine. Breitbart News, for instance, has run at least 87 headlines related to Somali refugees — many focusing on Minnesota, North Dakota, Vermont, and Maine.

Those headlines include “296 Refugees Diagnosed with Active TB in Minnesota, Ten Times Any Other State; Majority are Somalis,” “Flashback 2016: Somali Refugee Attacked 9 in Minnesota, Another Attacked 11 in Ohio,” and “Somalis: Least Educated of Refugees Arriving to U.S. in FY 2017.”

Stormfront has linked to Breitbart’s coverage — which frequently casts Somali refugees fleeing a brutal civil war as diseased terrorist recruits seeking handouts from the federal government — at least 5,800 times since July of 2013. And Breitbart is only one of a constellation of media outlets spewing such coverage.

Of the 20 states where Latinos dominated conversation, a closer look into the rate at which the discussions took place reveals that Texas, California, Arizona, and Florida — states with some of the highest Latino populations per capita — were mentioned more frequently in the context of Latino ethnicity when compared nationally. 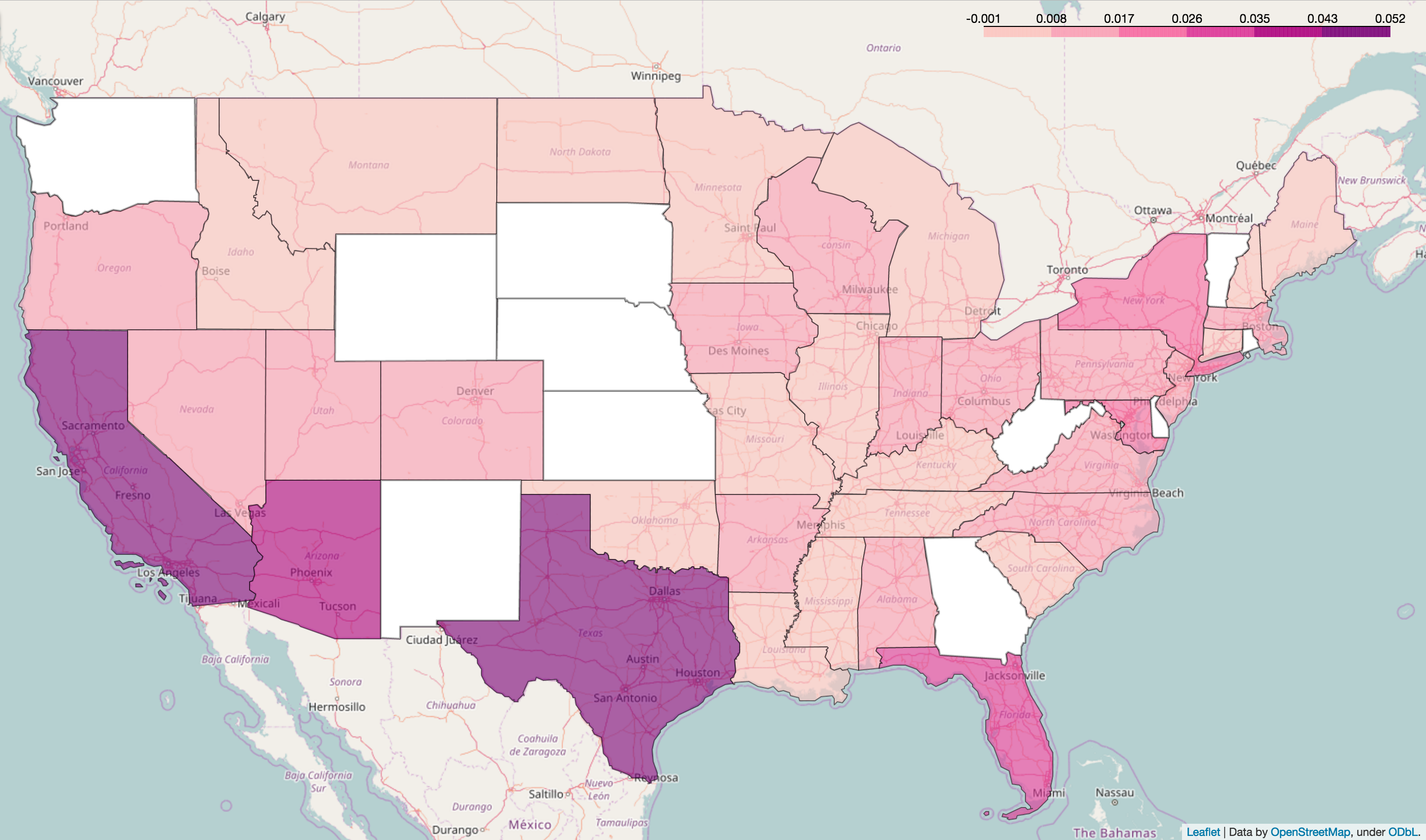 This map shows the degree to which Hispanics are mentioned in the same post as each state; darker colors indicate posts involving that state tend to involve Hispanics more often.

The same analysis around the geographic context of posts including terminology related to Black ethnicity revealed that its discussion on Stormfront was heavily correlated with states that have larger populations or have a major city, such as Illinois, New York and Ohio. 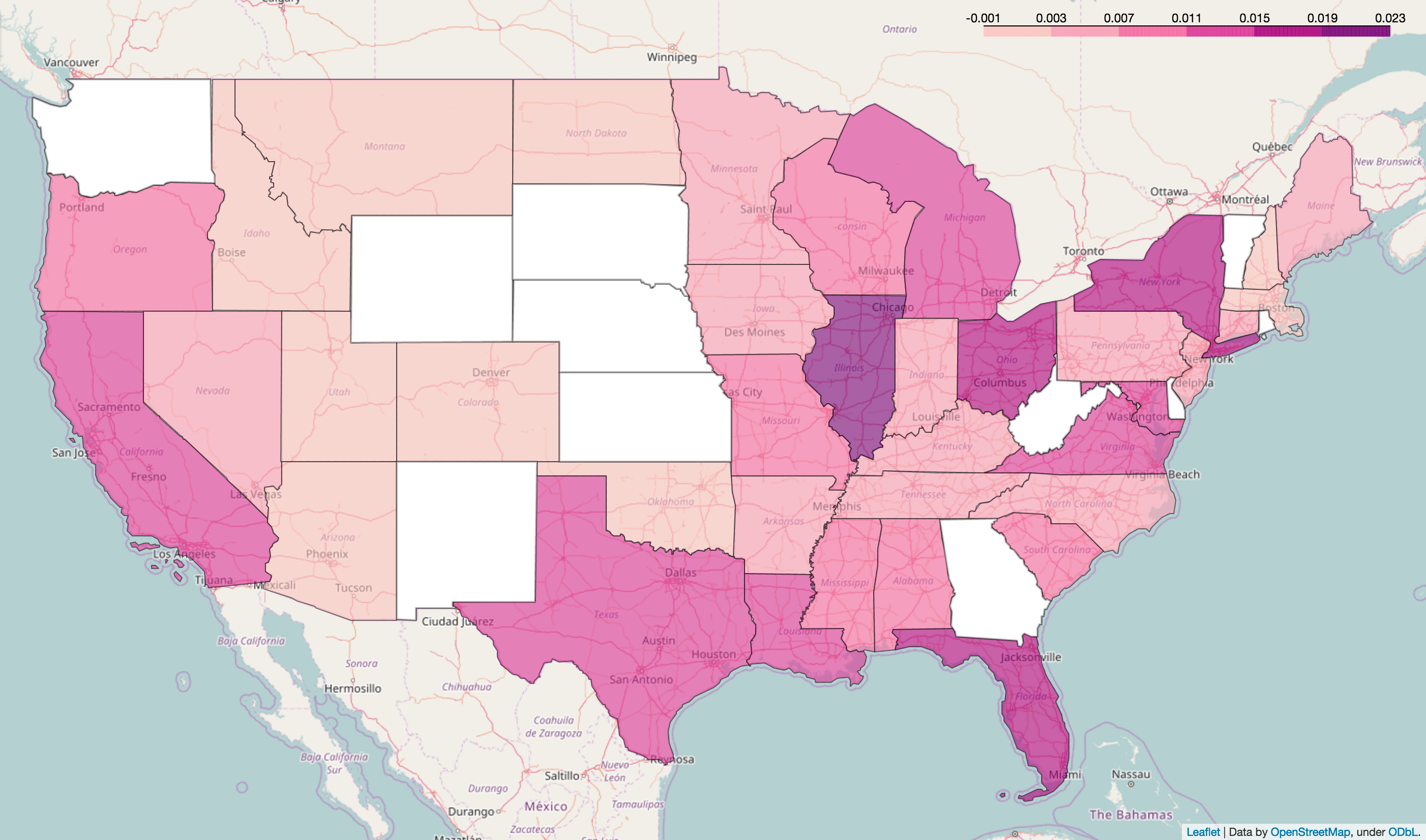