In a scathing ruling (PDF; may not load in some browsers) in which a federal court judge affirmed that anti-LGBT hate group leader Scott Lively of Abiding Truth Ministries aided and abetted anti-LGBT persecution and that Lively violated international law, the court has dismissed a lawsuit brought by a Ugandan LGBT groups on a narrow jurisdictional ground.

Judge Richard Ponsor cited a 2013 Supreme Court ruling that was issued after the initial lawsuit against Lively was filed. The ruling in Kiobel vs. Royal Dutch Shell limited the extraterritorial reach of the Alien Tort Statute (ATS), under which Sexual Minorities Uganda (SMUG) sued Lively in 2012.

The federal lawsuit against Lively was filed by the U.S.-based Center for Constitutional Rights (CCR) on behalf of SMUG. The suit alleged that Lively’s involvement in anti-LGBT efforts in Uganda, which included his active participation in the development of anti-LGBT policies aimed at revoking rights of LGBT people constituted persecution. The lawsuit was the first known ATS case “seeking accountability for persecution on the basis of sexual orientation and gender identity,” according to CCR.

Anti-LGBT hate group Liberty Counsel served as legal counsel for Lively and attempted to have the case dismissed in 2013, but the 1st Circuit Court of Appeals in Boston rejected that effort and the case proceeded in federal court.

Though the court dismissed the lawsuit, Ponsor’s 25-page ruling excoriated Lively and his anti-LGBT activities, stating that the “Defendant’s position on LGBTI people range from the ludicrous to the abhorrent,” and that, “he has tried to make gay people scapegoats for practically all of humanity’s ills.”

Ponsor continued, “This crackpot bigotry could be brushed aside as pathetic, except for the terrible harm it can cause.”

He went on to note that the record demonstrates that Lively worked with elements in Uganda who share some of his views to repress freedom of expression of LGBTI people in that country, “deprive them of the protection of the law, and render their very existence illegal,” noting that Lively proposed 20-year prison sentences for gay couples in Uganda “who simply lead open, law-abiding lives.”

“Anyone reading this memorandum should make no mistake. The question before the court is not whether Defendant’s actions in aiding and abetting efforts to demonize, intimidate, and injure LGBTI people in Uganda constitute violations of international law. They do. The much narrower and more technical question posed by Defendant’s motion is whether the limited actions taken by Defendant on American soil in pursuit of his odious campaign are sufficient to give this court jurisdiction over Plaintiff’s claims. They are not sufficient, summary judgment is appropriate for this, and only this, reason.”

Despite Ponsor’s finding that Lively’s activities are in violation of international law, Liberty Counsel celebrated the ruling in a press release, claiming that SMUG sued Lively for “sharing his biblical views on homosexuality.” The press release went on to say that CCR receives funding from George Soros, a dogwhistle to those who promulgate a right-wing conspiracy theory in which Soros, a progressive billionaire hedge fund manager, is falsely seen as a nefarious puppetmaster secretly controlling the global economy and politics.

Liberty Counsel also declared that, “the evidence showed that Lively, in a country where homosexuality has been illegal for decades, urged treatment of LGBT people with respect and dignity,” in direct contradiction to Ponsor’s ruling.

Mathew “Mat” Staver, Liberty Counsel president, addressed that aspect of the ruling, by claiming that, “the court’s open display of activism in deriding Lively’s beliefs reminds of the threats American Christians continue to face from a judiciary that is increasingly hostile to any expression of biblical truth to a decaying culture.” 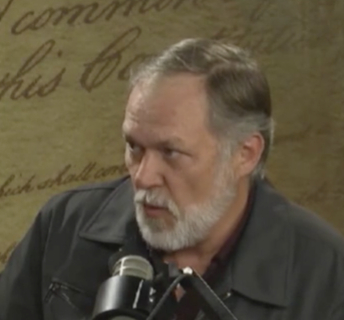 Scott Lively in 2015 on Focal Point with the American Family Association's Bryan Fischer. During the discussion, Lively claimed that homosexuality is worse than murder and genocide.

Lively is a longtime anti-LGBT activist, best-known for his conspiracy theories surrounding the “gay agenda” and for his 1996 book, The Pink Swastika, that claimed that the Nazi Party was made up of gay men who orchestrated the Holocaust. The book has been roundly refuted by historians.

Over the years, Lively has repeatedly lambasted LGBT people as “perverts,” “deviants,” “dangerous,” and equated homosexuality with pedophilia. He has written several books, claiming that homosexuality is a “dark force” throughout human history, as in his 1997 tract, Poisoned Stream.

The introduction to that work says that he has “"come to discover, through various leads, a dark and powerful homosexual presence in other historical periods: the Spanish Inquisition, the French “Reign of Terror,” the era of South African apartheid, and the two centuries of American slavery. … I have come to believe … that homosexuality has truly been a ‘poisoned stream’ in human history."

In 2009, Lively spoke at a virulently anti-LGBT conference in Kampala, Uganda, where he presented his conspiratorial anti-LGBT views and met with lawmakers who then developed the notorious “kill the gays bill,” which called for the death penalty for LGBT people in certain instances.

“This case is a win for SMUG. The court’s ruling recognized the dangers resulting from the hatred that Scott Lively and other extremist Christians from the U.S. have exported to my country. By having a court recognize that persecution of LGBTI amounts to a crime against humanity, we have already been able to hold Lively to account and reduce his dangerous influence in Uganda.”

Ponsor’s ruling makes clear that it is without prejudice to re-filing in state court if the Plaintiff wishes to do so.