Yesterday, white nationalist and Alt-Right figurehead Richard Spencer spoke just above the reflecting pool at the Lincoln Memorial as part of a “Freedom of Speech Rally” organized by 19-year-old Colton Merwin.

While the rally was originally conceived to include Alt-Right personalities like Mike Cernovich and Jack Posobiec, anti-Semitic harassment against Rebel Media’s Laura Loomer and other online feuding led to the staging of a rival event “Rally Against Political Violence” outside the White House.

At the Lincoln Memorial, however, around 100 people gathered to hear a slate of speakers that included Augustus Sol Invictus, the self-described leader of the so-called “Alt-Knights,” Jason Kessler, a proud neo-Confederate and contributor to VDARE and the Daily Caller, Nathan Damigo, the founder of the white nationalist group Identity Evropa, and assorted other far-right YouTubers and Podcasters. 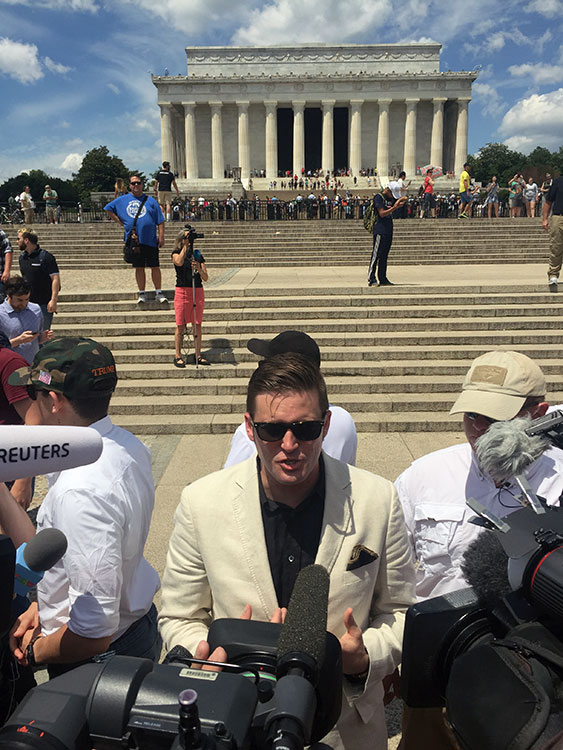 Members of white nationalist groups Identity Evropa, Vanguard America, and the Traditionalist Workers Party were in attendance wearing uniforms and carrying flags. They cheered along as speakers inveighed against “illegals,” “white genocide” and “cultural Marxism.”

In a call for uniting the right, Invictus used the setting to recall that President Abraham Lincoln pardoned prominent Confederates following the Civil War, though other speakers couldn’t resist taking swings at the so-called “Alt-Lite” and Posobiec and Loomer in particular.

“These people on the Alt-Lite, the Jack Posobiecs, they will never criticize Donald Trump. These people are not serious political thinkers. They are not to be listened to. They’re nothing but shills,” said YouTube personality James Allsup, with some of the biggest boos of the day coming after Posobiec’s name.

Later, Allsup announced that their rally was twice as big as the one outside the White House and was greeted with cheers of “Hail Victory.”

But what separated the two rallies besides the overt white identity politics of the likes of Spencer and Damigo was the topic of the Jews.

Kessler, who had a Confederate battle flag held up behind him during his speech and said that the “entire country would be better off if the South had won the Civil War,” was the first to defend anti-Semitism by being, well, anti-Semitic:

“[The Laura Loomers and Jack Posobiecs of the world] say they won’t do the rally because somebody is anti-Semitic? So there’s a group you can’t criticize? I’m not going to go overboard on anybody…but I will just say this: they are a powerful group! They have AIPAC, the Israel lobby. They’re two percent of the population and they pretty much run Hollywood and brag about it. And they are the ones putting out this filthy propaganda. CNN. All you guys out here tell me who is in charge of the global conglomerates that own you, that own CBS and NBC?”

Baked Alaska, who was suspended by Twitter for a week in part for circulating a meme depicting a cartoon of President Trump in a Nazi uniform and Loomer in a gas chamber, also spoke. “I thought it was funny, personally. Mike Enoch thought it was funny,” he said, referencing another speaker who runs the anti-Semitic podcast The Right Stuff.

“I have to really follow the truth in my heart and what I believe,” Alaska said. “And I’ve seen an awakening, lately. Have you guys seen it? Generation Zyklon? I mean Generation Z?” 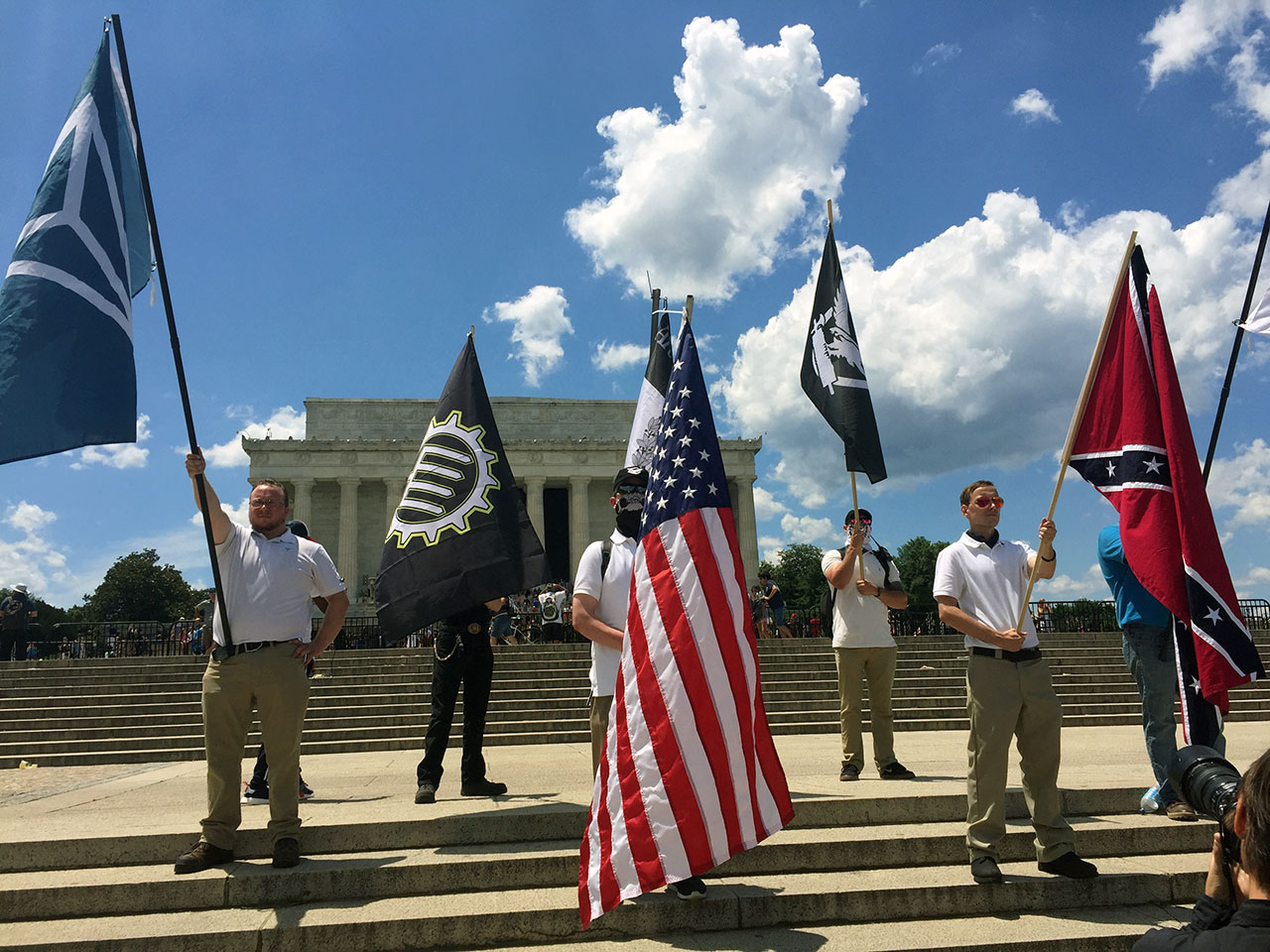 Enoch, whose real name is Mike Peinovich, would later speak and also railed against Jews.

“So, freedom, the constitution and liberty, it’s all good stuff but let’s be honest what’s really facing our country today is the systematic elimination of white people. The genocide of the white race,” Peinovich said to cheers.

In a rant that began with a discussion about an article in the Jewish magazine Forward, Peinovich said:

If the answer is not now then we might as well throw in the towel and forfeit to the Communists today. We are losing massive ground each moment. Nonwhite immigration and breeding alone are rapidly diminishing what electoral majorities we have remaining. Jewish influence disarms us in the onslaught of identity politics. Our universities teach no more than the propaganda of our enemies to our children and we are compelled to subsidize it all with our own earnings under penalty of imprisonment or death for refusal. Disrupting a play is the most civil thing we should do to these vermin.

Damigo, whose Identity Evropa members wearing white polo shirts and khakis made up a significant portion of the crowd, also spoke:

I think it would be an injustice to come to a Free speech rally and simply talk about Free Speech. So I’m going to say some radical shit. Say some radical things here. America was founded by white people. It was founded for white people. America was not founded to be a multiracial, multicultural society. The founders were well aware of the importance that identity played in the make-up of a nation. And how fundamental it was to the future progress and success of that people.

The reason why our nation is where it is today, is because of anti-dialogical forces. Individuals who were haters of truth. And what they did, they used tactics, they used tactics we’ve seen over the last year to shut us down, this is nothing new. This has been going on decade after decade after decade. The cultural Marxism that permeates every orifice of our society today is a result of this tyranny. 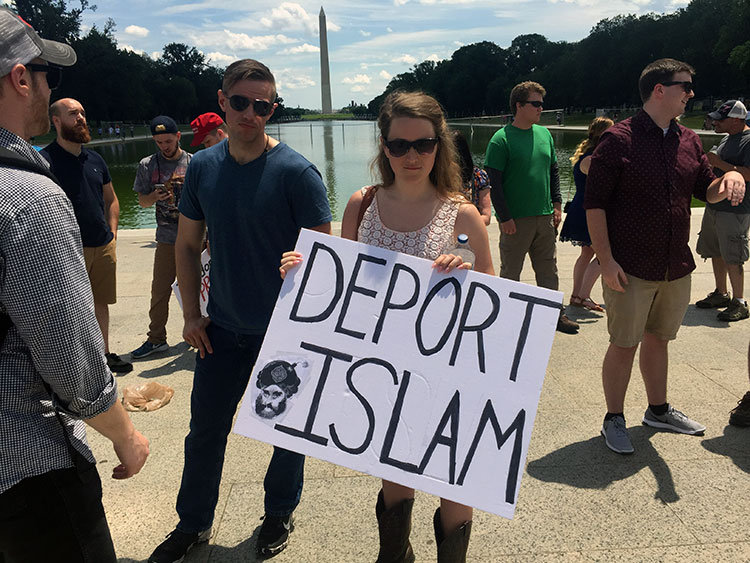 A Spencer supporter at the Lincoln Memorial rally.

Damigo left the stage after chanting “Moldylocks! Moldylocks!” with the crowd referencing the woman who he sucker-punched in Berkeley, California back in April.

On the other side of town, at the White House, the “Rally Against Political Violence” organized by Cernovich and Posobiec attracted about 50. The event was relatively tame though an African American man wearing an Info Wars t-shirt railed against CNN before shouting, “It’s time to put George Soros in a gas chamber!”

Half a dozen or so speakers took turns addressing the crowd from a small makeshift stage, where the overarching theme was blaming “the left” and “Antifa” for the political violence taking place in America.

Lucian Wintrich, the White House correspondent for the Gateway Pundit read out a list of hate incidents that had either turned out to be fake or the perpetrators were left leaning.

Corey Stewart, Confederate flag supporting politician who recently ran and lost in a Virginia gubernatorial race told the crowd to get behind president Trump and also support his crackdown on “illegal immigration.”

Stewart Rhodes, head of the anti-government group Oath Keepers was also in attendance with some of his crew providing security for the event.

Rhodes also took the stage and decried Antifa, stating, “They now realize that if they order the cops to stand down and if those cops actually do stand down its going to be worse for Antifa. Antifa will get their asses handed to them by the American patriots.”

Spencer, Kessler, and others plan to rally again in Charlottesville, Va., on August 12. The theme of that rally? Unite the right.