Exodus from racist-heavy speakers' lineup for Lincoln Memorial rally Sunday fuels a rival alt-right protest at the White House, and the two sides engage in social media warfare over it. 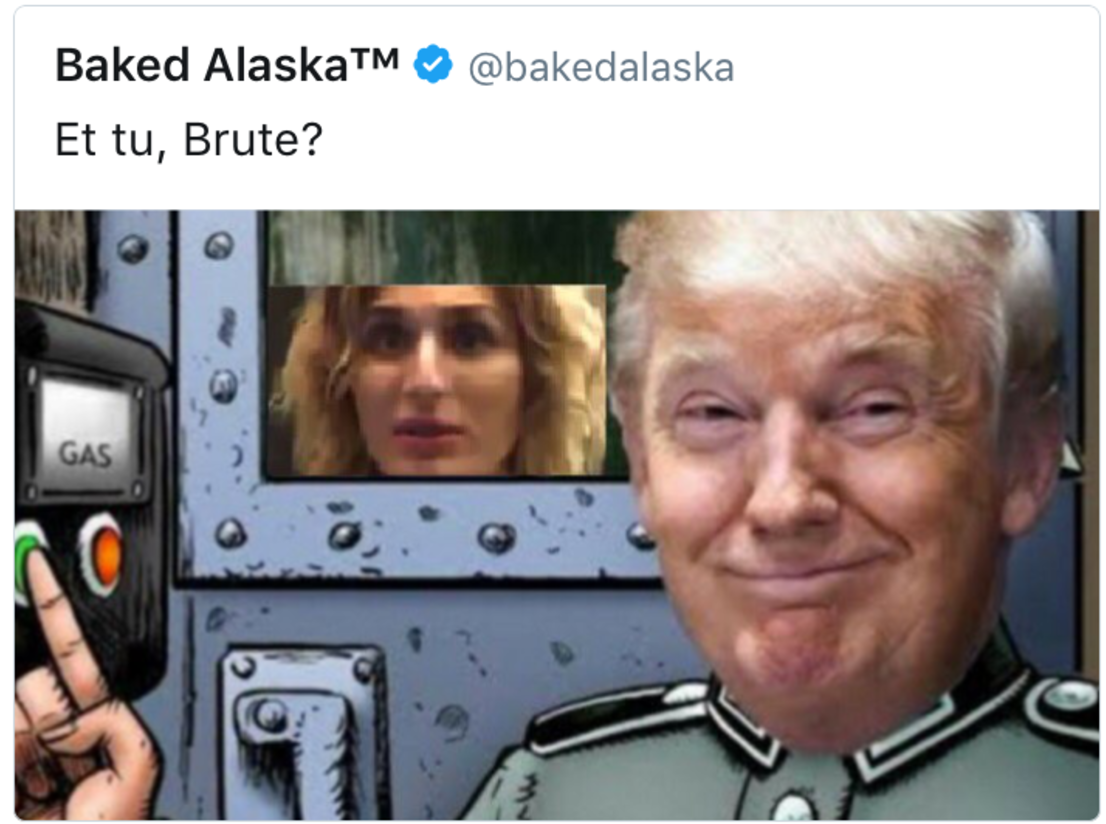 Although the alt-right presents itself as a new kind of white male nationalism rewired for the 21st century, it is proving in practice to have many of the same qualities as its old 20th-century forebears: Riddled with infighting and internecine quarrels, the product of a movement whose sociopathic agenda attracts similar personalities, ego-driven and contentious.

The infighting, which first erupted last week between far-right Oath Keepers and white nationalist alt-righters, deepened this week when two factions — outright white nationalists and committed racists on one hand, and alt-righters (dismissed as the "alt-light") who disavow them and their politics while embracing the movement agenda — squared off on social media over a series of “free speech” events aimed at provoking left-wing counter-protests and, potentially violence.

The result is that there will be two competing “free speech” events this Sunday in Washington, D.C.; one a “Rally Against Political Violence” hosted by alt-right provocateur Jack Posobiec, planned for noon at the White House; the other a “Freedom of Speech Rally” hosted by Colton Merwin at the Lincoln Memorial, and featuring such white nationalist figures as Richard Spencer, Nathan Damigo of Identity Evropa, far-right “neo-Pagan” Augustus Invictus, blogger Jason Kessler, and social-media celebrity Tim “Baked Alaska” Gionet.

The White House rally will feature alt-right figures such as Laura Loomer (who recently made headlines by taking the stage during a performance of Julius Caesar in New York City), “Kekistan” fan Cassandra Fairbanks, and Kyle Prescott of the alt-right “fight club” Proud Boys. It apparently was organized by alt-right figure Mike Cernovich and Posobiec in response to the roster of speakers invited to the Lincoln Memorial rally; speakers such as Loomer (whose background included a stint as a writer for hate-group leader Pamela Geller’s Islamophobia operation) had originally been scheduled to speak there but then canceled.

Organizers explained the rally is intended to condemn “political violence such as the attack on Steve Scalise and US Congress recently, as well as depictions of gruesome displays of brutality against sitting US national leaders. All sides must join together to condemn violence and the violent rhetoric that inspires it!”

The Lincoln Memorial rally organizers expressed their regrets: “I'm sure some of you have already heard by now, but several speakers have dropped out due to the confirmation of Richard Spencer as a speaker. Now, not only is this horribly hypocritical, but is also bordering on an Antifa principle. By not sharing the platform with someone you disagree with you are therefore not supporting their right to speak.”

“I don't know Spencer, I have been famously ambivalent toward the man, but I am looking forward to meeting with him and to defending his right to say whatever the hell he's going to say on Sunday,” chimed in Augustus Invictus. “That is where I stand.”

The two sides began sniping at each other on social media. “All of you guys pulling out of the Freedom of Speech Rally are c----,” posted a critic on the Facebook page of the “Political Violence” rally. “It's flat out hypocritical to be speaking at a Freedom of Speech rally only to pull out of the event because someone you disagree with is speaking. That makes you a hypocrite with no balls and no conviction. Grow a pair.” 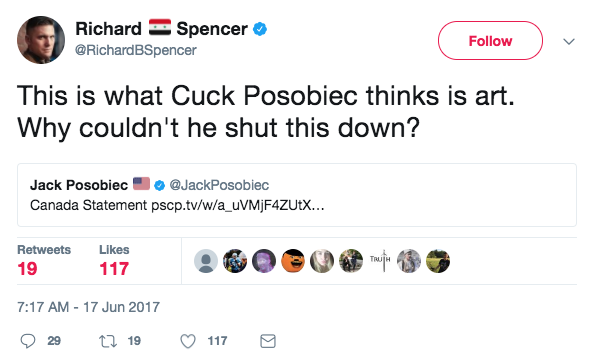 On Twitter, Spencer labeled Posobiec a “c---,” and taunted him: “Oooosh... Jack Posobiec is a great war hero. No one can criticize him.” He dismissed the rally as the "Alt Light," and called them "a collection of liars ... perverts ... and Zionist fanatics." He also made fun of them for changing the focus of their rally: “Apparently, these dorks blushed at the idea of calling their little meet-up a ‘free speech’ rally.” He added: “The Tea Party, at least at its inception, was an authentic expression of American nationalism. These people total zeros.”

Jason Kessler posted a video demonstrating that Posobiec had plagiarized his work while he was employed at the Canadian alt-right website The Rebel; in response, Posobiec blocked him. Posobiec also apparently blocked “Baked Alaska” for criticizing one of his media stunts.

“Baked Alaska” also got into a Twitter war with Loomer after he posted a meme with her face Photoshopped into a gas chamber, outside which stood Donald Trump in a Nazi uniform, ready to pull the switch: “Et tu, brute?” it read.

Loomer responded in shock: “Wow. I'm calling on @bakedalaska to fully condemn anti-Semitism after posting this pic of me inside a gas chamber.” 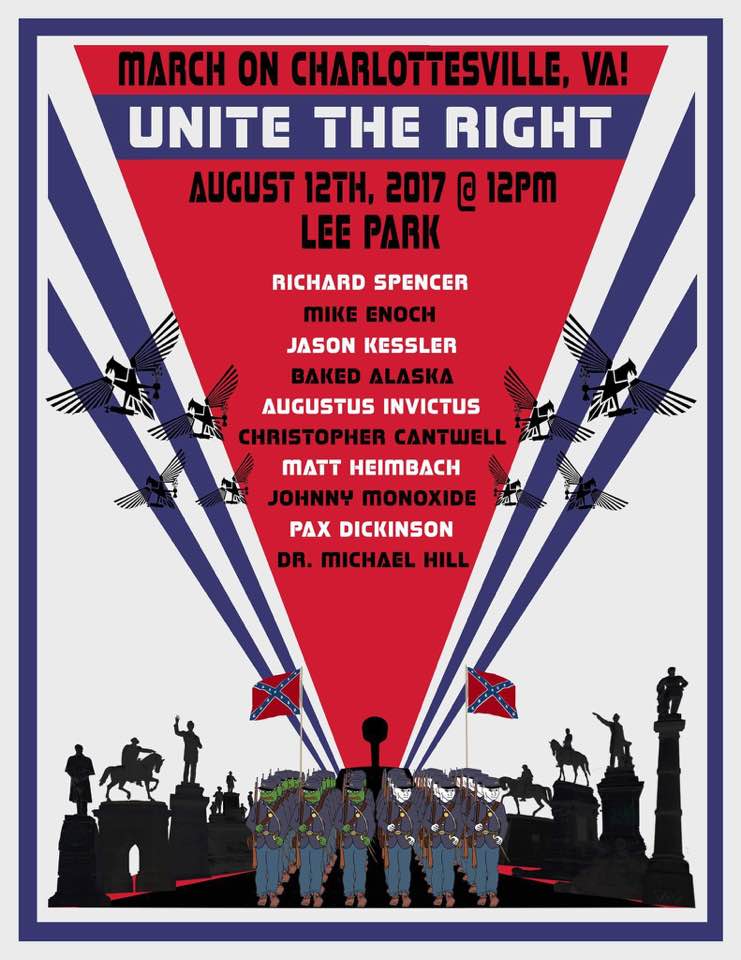 The poster for Kessler's Aug. 12 event.

A similar feud threatened to break out over another “free speech” event, this one an Aug. 12 “Unite The Right” rally in Charlottesville, Va., organized by Kessler as part of his ongoing protest against the threatened removal of a Confederate monument to Gen. Robert E. Lee.

“Infighting is part of every movement - but it doesn't have to be,” posted Augustus Invictus on his Facebook page, along with a poster for the event.

A white nationalist commented:  “Very happy to see that ‘Based Stickman,’ the anti-white civic nationalist c--- and shameless mountebank, has apparently been removed from the line-up. Good. He would've been fundamentally at odds with the other speakers.”

Responded Kessler: “He's planning to be here in a non-speaking role to back-up our attendees in the event of Antifa violence. For that, he is a friend to the event and to the First Amendment rights of our speakers.”

In the meantime, another would-be participant posted: "Will the Oath C---- be there?"

It might be time to stock up on the popcorn.