In extremist circles, there appears to be a bump of interest in Timothy James McVeigh.

Yes, that Timothy McVeigh. The guy who used a Ryder truck to bomb the Alfred P. Murrah Federal Building in Oklahoma City on April 19, 1995, killing 168 innocent children and adults and wounding more than 600 others.

His act 22 years ago, for those who may have forgotten, was the deadliest terrorist attack in the United States before the attacks of Sept. 11, 2001.

McVeigh was convicted of terrorism and executed just three months before those attacks.

His name and heinous crime are not forgotten, nor should they be, while there seems to be a growing admiration for McVeigh in some extremist circles. One militia honcho even likened McVeigh to Jesus Christ.

Check out these recent mentions of McVeigh:

In mid-May, police in Tampa, Florida, responded to the scene of a double-murder involving young, self-described neo-Nazis.

Brandon Russell, who shared the apartment with the murder suspect, was charged with possession of bomb-making materials and chemicals,  including ammonium nitrate – the same kind of material used by McVeigh.

In Russell’s bedroom at the apartment he shared with the murder suspect and the two slain neo-Nazis, police found a framed photograph of Timothy McVeigh. Russell, who’s in custody, hasn’t publicly explained that fascination.

In late May, police in Washington, D.C., arrested a man with an AR-15 assault rifle, a 40- caliber handgun and 90 rounds of ammunition at the Trump Hotel, not far from the Capitol and the White House.

Police said Bryan Moles, 43, of Edinboro, Pennsylvania, told a tipster that  he wanted to “get close to Trump” and “wanted to be like Timothy McVeigh.”

Court document say Moles, who had worked as a physician, was armed with an assault rifle and a handgun and was in the nation’s capitol “to see the president.” He told an acquaintance, court documents say, that he had enough ammunition to make his car resemble Timothy McVeigh “on a camping trip.”

Before traveling to Washington, D.C., police learned Moles emptied his bank account, leaving behind a balance of $4.19 – perhaps symbolic of the 4-19 date of McVeigh’s act of terrorism in 1995. 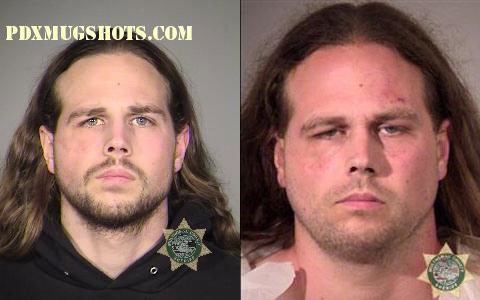 Homicidal Portland stabber Jeremy Christian praised McVeigh on the anniversary of the Oklahoma City bombing in an April Facebook post, writing, “May all the Gods Bless Timothy McVeigh -- a TRUE PATRIOT!!!”

Then on May 26, Jeremy Christian, who held extremist views, went on a rampage in Portland, Oregon, slashing the throats and killing two men who attempted to come to the aid of two women Christian was harassing.

Just a month earlier, on the anniversaryof McVeigh's deadly act of terrorism, Christian praised the Oklahoma City bomber in a Facebook post.  “May all the Gods Bless Timothy  McVeigh -- a TRUE PATRIOT!!!” Christian wrote.

More recently, neo-Nazi Andrew ‘Weev’ Auernheimer, who writes for the racist web site “Daily Stormer,” said he was serious in proposing a crowd-funding account to raise money to build a “permanent monument” in a memorial grove honoring McVeigh.

“Think of it, a gigantic bronze statue of Timothy McVeigh poised triumphantly atop a Ryder truck, arms raised as if to form an Algiz rune from his body, with a plaque that states the honest truth,” Auernheimer wrote. “Nothing would be a greater insult to these pizza-party guarding federal swine than a permanent monument honoring [McVeigh’s] journey to Valhalla or Fólkvangr atop the piles of their corpses.”

“I am not joking,” Auernheimer wrote. “This should be done. Imagine how angry it would make people.”

Last year, during the illegal occupation of a federal wildlife refuge in Oregon by antigovernment figurehead Ammon Bundy and his militia followers, Norm Olson, another long-time militia activist and leader, made ominous public comments about McVeigh.

“The battle for the rights of the people rages on and it should be assumed  that lone wolf patriots may be planning another response to the central  government's abuses,” Olson wrote. He claimed federal agents “murdered”  Bundy associate LaVoy Finicum, inciting Patriots, during the 2016 refuge occupation.

“Once the fuse is lit, it will be hard to extinguish,” Olson said. “There's a place that we all should think about: Oklahoma City.”

Two days later, Olson, who has been active in militia groups in Michigan and Alaska, said he was ready to tell members of Congress that “Timothy McVeigh DIED FOR YOUR SINS!!!!!!!!!”

It's worth remembering that Olson had a unique glimpse of McVeigh. He and Oklahoma bombing co-conspirator, Terry Nichols, attended a meeting of the Michigan Militia, which Olson founded in 1994, a year before the Oklahoma City bombing.

“Anger and frustration create a personal vendetta,” Olson wrote last year, claiming that the U.S. government’s “case against Tim McVeigh was based on his motive.”

“His motive was VENDETTA, retaliation, retribution, eye-for-eye ..f. call it what you want, but there will be blood ... maybe not right away, but soon,” Olson’s said in his ominous public warning.

Apparently referring to McVeigh, Olson said there are other “Patriots out there who “want to be remembered” and are coming to the realization that THERE IS NO JUSTICE ... IT IS JUST US!

Of course, McVeigh may never be as popular as other extremist and far-right heroes and memes - - the swastika, the burning cross, Adolf Hitler, Pepe the Frog, George Lincoln Rockwell, the numbers 88 and 14 words, the KKK blood-drop cross, William Pierce.

But the question remains, why would anyone romanticize a modern-day, extremist serial killer and terrorist?

Tom Pyszczynski, a professor of psychology at University of Colorado who has written about the psychological makeup of extremists, said he believes only a “relatively small number of people” are enthralled with McVeigh.

“The psychological, social, economic and political forces that lead some Americans to idolize McVeigh are the same as those that lead disenfranchised or disillusioned young people in other parts of the world to idolize Osama bin Laden or ISIS,” Pyszczynski told Hatewatch.

“They see them [McVeigh, et al] as heroes who stand up for people like them,” said Pyszczynski, who co-developed and tested a “terror management theory,” dealing with the role of death in life and the role that meaning and self-esteem play in managing the fear of death.

“Of course, the specifics of the issues and lives of the people who follow ISIS and those who idolize McVeigh are different, but beneath the surface it usually boils down to a feeling that one's people are disrespected and mistreated, that one's way of life is under siege from powerful forces, and that the world as they know it has gotten out of control,” the university psychologist said.

“All people crave meaning in life and a sense of personal or group heroism to protect them from their deepest fears,” he said, explaining that ultimately boils down to the “facts of life, involving death and vulnerability.”

But some people, he said, aren't able to find this in their worlds. So they look elsewhere, to radical fringe groups, like ISIS for some, or white nationalist groups for others.

“These groups typically have heroes who are idolized as standing up to powerful forces and if they die in that fight, they are considered martyrs,” Pyszczynski said.

Clark McCauley, a research professor of psychology at Bryn Mawr College in Pennsylvania, offered similar brief views about those individuals enchanted with McVeigh.

“McVeigh is ... a symbol of resistance and a hero for those who hate and fear the U.S. Government,” McCauley told Hatewatch. “This includes a wide range of people, some who see themselves as neo-Nazis and some who do not.”

McVeigh’s bombing plan generally followed a fictional account of a race war depicted in the “Turner Diaries,” a novel written by William Pierce, a one-time college professor who went on to lead the National Alliance, a neo-Nazi hate group.

McCauley said he doesn’t personally believe McVeigh was a neo-Nazi, so “he can therefore be a hero for many different anti-government groups.”

Pyszczynski, who teaches at the Colorado Springs university, said people “who feel their way of life is under siege” identify with “heroes” like McVeigh.

“So radical ideologies, whether they be Islamist or white nationalist, are appealing to people who struggle to find meaning and a sense of personal value in their own lives and view another group as the repository of evil against which they must fight to reclaim that meaning and value,” he said.