The organized anti-Muslim movement — from fringe activists to those who fraternize with President Trump — are unified in their outrage over recent remarks by civil rights activist Linda Sarsour, falsely arguing that she was inciting violence against President Trump.

On July 1, Sarsour, a Palestinian-American and the co-organizer of January’s worldwide Women’s March, delivered a speech to the Islamic Society of North America (ISNA), in which she discussed pushing back against those who oppress vulnerable communities, including pushing back against the Trump administration. 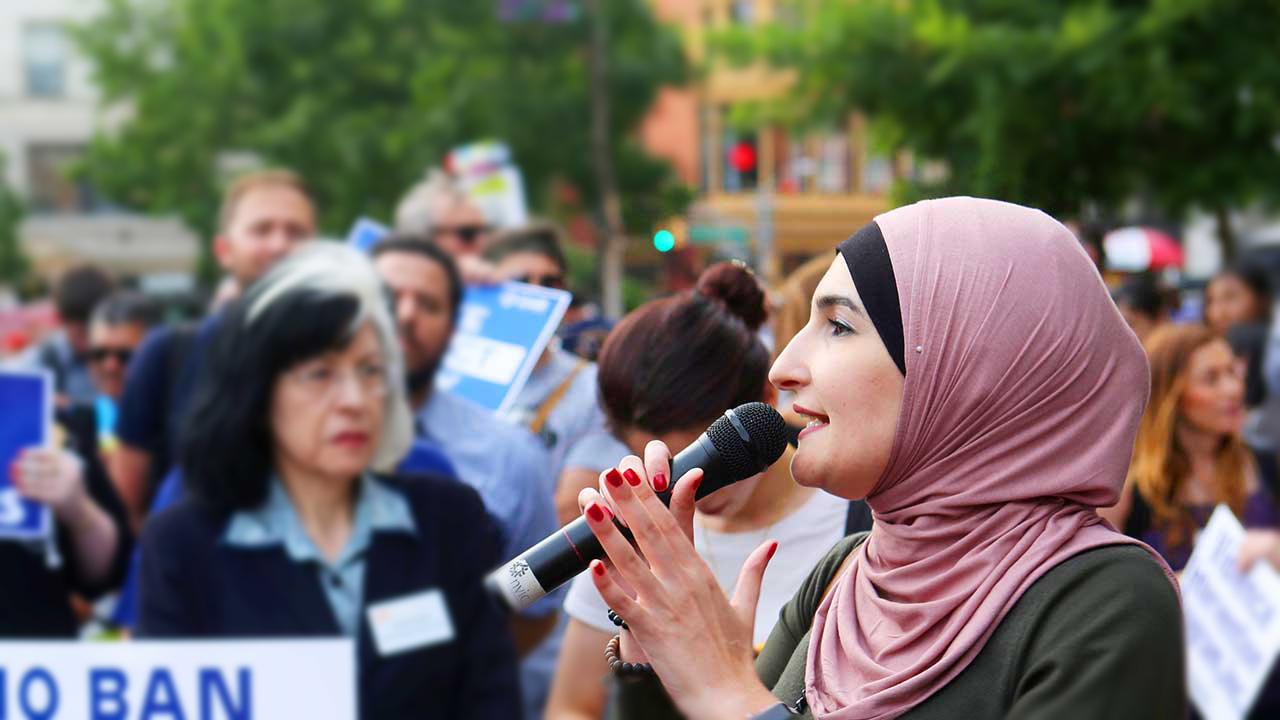 Linda Sarsour boldly fires back at her detractors in the anti-Islam crowd: "In short, I am their worst nightmare."(Reuters/Joe Penney)

“I hope that … when we stand up to those who oppress our communities, that Allah accepts from us that as a form of jihad … here in these United States of America, where you have fascists and white supremacists and Islamophobes reigning in the White House,” she told attendees.

For years, Sarsour has openly battled anti-Muslim groups and individuals, making her a loathed figure in those circles. So, predictably, the anti-Muslim movement took Sarsour’s words out of context, claiming she was calling for violence, sparking a complete meltdown from anti-Muslim groups across the spectrum.

Sarsour’s use of Arabic word “jihad” is clearly what threw the anti-Muslim world into a tizzy. The term is one of many Arabic words co-opted by the anti-Muslim movement to push an agenda linking Islam to violence and a “takeover” of Western civilization. Phrases like “civilization jihad,” a conspiracy theory claiming it is a goal of Muslims to take over the United States from within, and “creeping Shariah,” which suggests Islamic law is usurping the U.S. Constitution, are used ad nauseam by key anti-Muslim spokespersons.

But Sarsour’s use of the term “jihad” which translates to “the struggle” has much different connotations to the predominately Muslim audience she uttered it to. As Qasim Rashid, a civil rights activist and lawyer wrote in the Washington Post following the outrage by Islamophobes over Sarsour's address, “as defined by the true Islam of Prophet Muhammad and the Koran -- [jihad] means a struggle for self-reformation, education, and protection of universal religious freedom.”

On Twitter, Mehdi Hassan, a host on the TV channel Al Jazeera English and a writer at The Intercept and the New Statesman pointed out: “Isn't it interesting/revealing that the two groups of people who insist `jihad' refers to violence are the terrorists and the Islamophobes?”

The usual suspects rounded on Sarsour after her speech. Robert Spencer, one of America’s most outspoken anti-Muslim activists wrote a piece for PJ Media July 10, titled, “Yes, Linda Sarsour Did Incite Violence Against President Trump.” In a separate piece for the Geller Report, he wrote, “Linda Sarsour no doubt knows this as well, and as such, knew just how incendiary her words really were. And if a Muslim decides to wage jihad, in its Qur’anic and traditional sense, against President Trump, she should be held legally responsible for this incitement.”

“The Global Islamic Movement led by the Muslim Brotherhood continues to call for the destruction of the United States and the West," he wrote in an email to his supporters. "We have long past the time when we must destroy them and their Movement utterly.”

Spencer’s chum Pam Geller chimed in on her website, writing, “This pro-Sharia Jew-hater is now directly inciting violence. With the left growing more violent and fascistic by the day, this will only make her all the more their icon. And if Trump is actually assassinated, the left will make her a saint, as much of a hero as Che Guevara.”

Similarly, Alex VanNess -- whose primary role at the anti-Muslim “think tank” Center for Security Policy (CSP) is attacking Sarsour -- ended a piece he wrote for the CSP website with the line, “How long will the political left put up with those who hobnob with terrorism?”

Daniel Greenfield, another man with a long history of anti-Muslim hate speech, wrote a piece for FrontPageMag, claiming, ”Sarsour was speaking in the typical language of the Muslim Brotherhood. Its notion of political change embraces a spectrum that includes both violent and non-violent action. Its primary allegiance is Islamic Supremacism.”

In a follow-up piece, Greenfield attacked the Prophet Mohammad, writing, “[Sarsour's] beloved prophet was a psychotic mass murderer who ordered the rape and killing of non-Muslims. ISIS' crimes were based on Mohammed's atrocities.”

Across social media, there were calls to arrest Sarsour, coupled with calling her a seditionist.

Brigitte Gabriel, the head of  ACT for America, the largest grassroots anti-Muslim group in the United States, called Sarsour a “fake feminist jihadi” and ISNA a “terrorist group” in a tweet on July 7. Gabriel’s rhetoric has become more and more extreme recently, making a mockery of her organizations increasing efforts to whitewash the fact that it is a magnet for hardcore racists, including neo-Nazis and white nationalists.

This is not the first and will not be the last time the anti-Muslim movement attacks Sarsour. Witch-hunts against Muslim professors, politicians and prominent community leaders are a common anti-Muslim tactic.

But Sarsour, as you would expect, is not backing down. In her July 9 Washington Post response to the anti-Muslim uproar over her speech, Sarsour discussed the hijacking of the term jihad, and also her commitment to non-violent resistance as espoused by Dr. Martin Luther King Jr. before succinctly summing up her detractors.

“These ugly threats come from people who also spout anti-Muslim, xenophobic and white-supremacist beliefs," she wrote. "Their sole agenda is to silence and discredit me because I am an effective leader for progress, a Palestinian American and Brooklyn-born Muslim woman.

"In short, I am their worst nightmare.”