SEATTLE—The tone of Sunday’s alt-right rally in downtown Seattle was remarkably different from that of previous protests organized by the Portland, Oregon-based Patriot Prayer provocateurs, at least on the surface.

As in previous rallies led by Joey Gibson, Patriot Prayer’s chief organizer, counter-protesters massively outnumbered his band of right-wing supporters, which as always included a notable contingent of armed and armored “III Percent” militiamen working as security for the event. 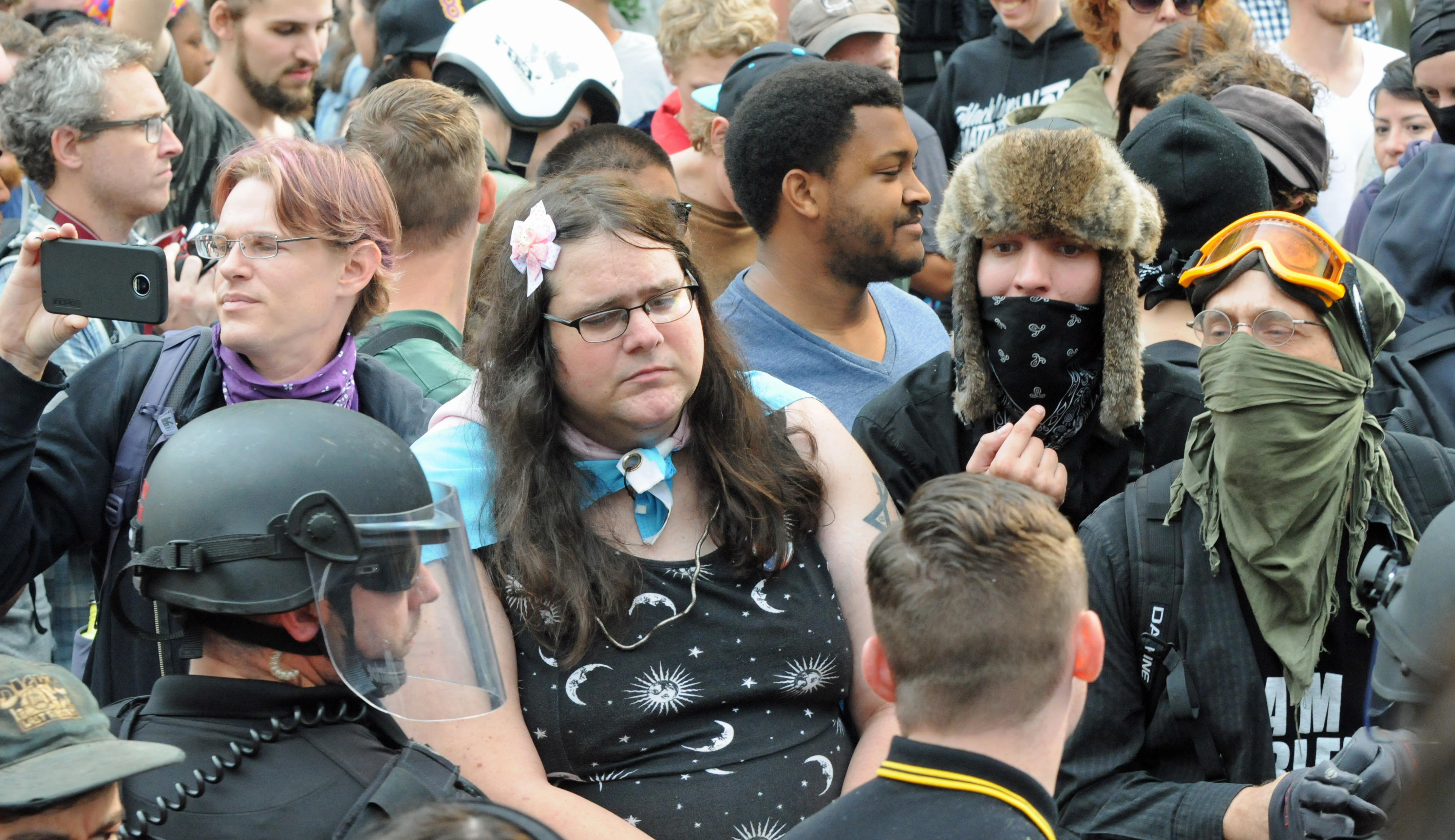 And once again, the rally was loudly booed and interrupted by the chanting protesters, a number of them black-clad “antifascists.” They were generally held back, again, by barriers around the rally and by a massive police presence.

However, unlike previous rallies, Gibson invited a number of non-supporters onstage to voice their opposing views, sometimes in harsh terms. Even Gibson himself offered some stark views, making clear they were in response to the violence at the alt-right event the day before in Charlottesville, Virginia. 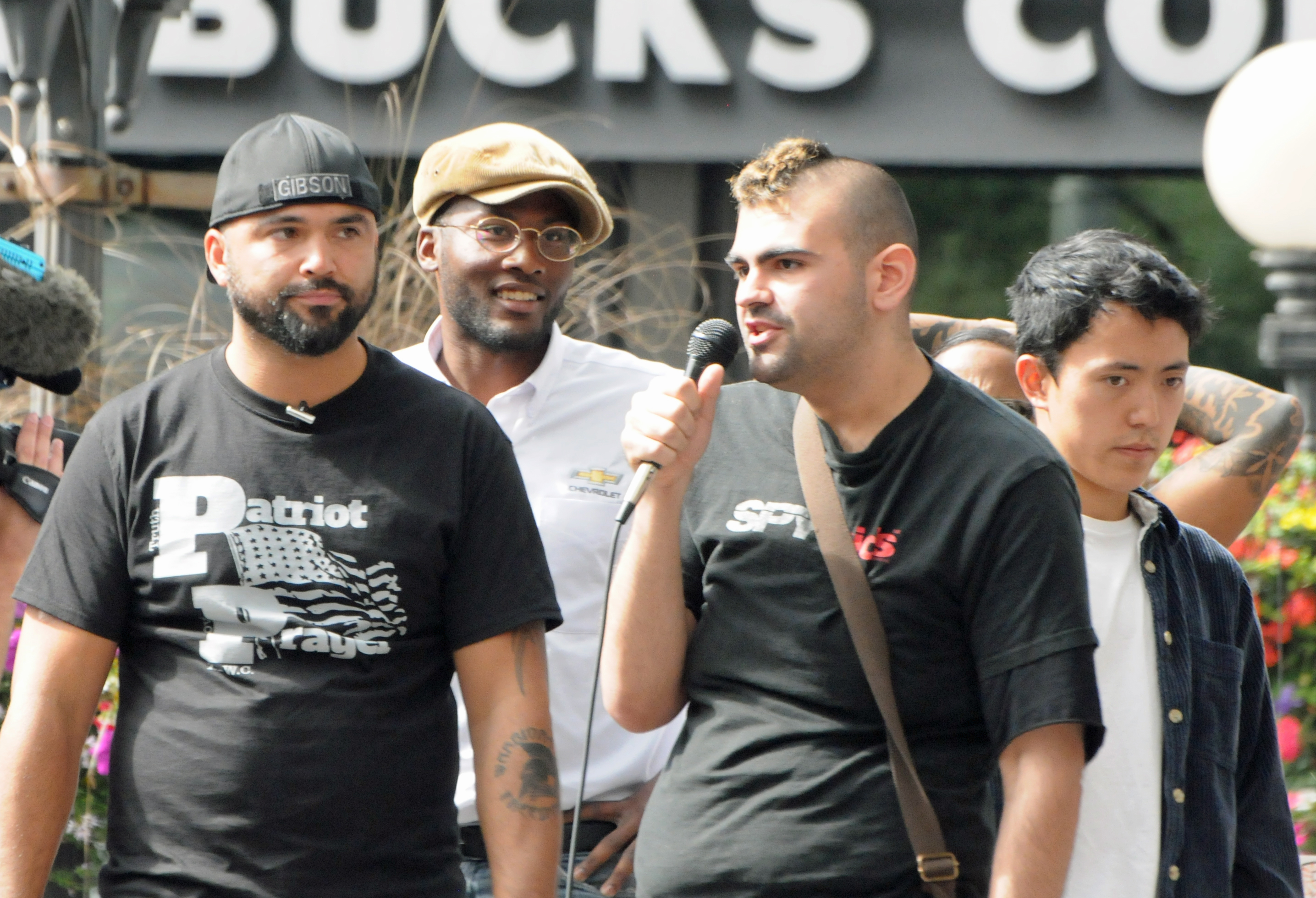 Organizer Joey Gibson, at left, emphasized diversity among his speakers, including a number of nonwhite supporters of his cause. Photo by David Neiwert.

Later, as the rally wound down, he became more explicit.

“F--- white supremacists! F--- neo-Nazis!” Gibson told the crowd, reminding them that he himself is a person of color, “and I have no use for that kind of thinking. It’s wrong.”

This may have surprised some of his supporters, including those with whom Gibson had marched the week before in Portland. At that rally, a number of white-nationalist Identity Evropa activists (notably Jake Von Ott, leader of the local Evropa unit) participated on the alt-right side of the protest, including throwing punches in several of the brawls that broke out. 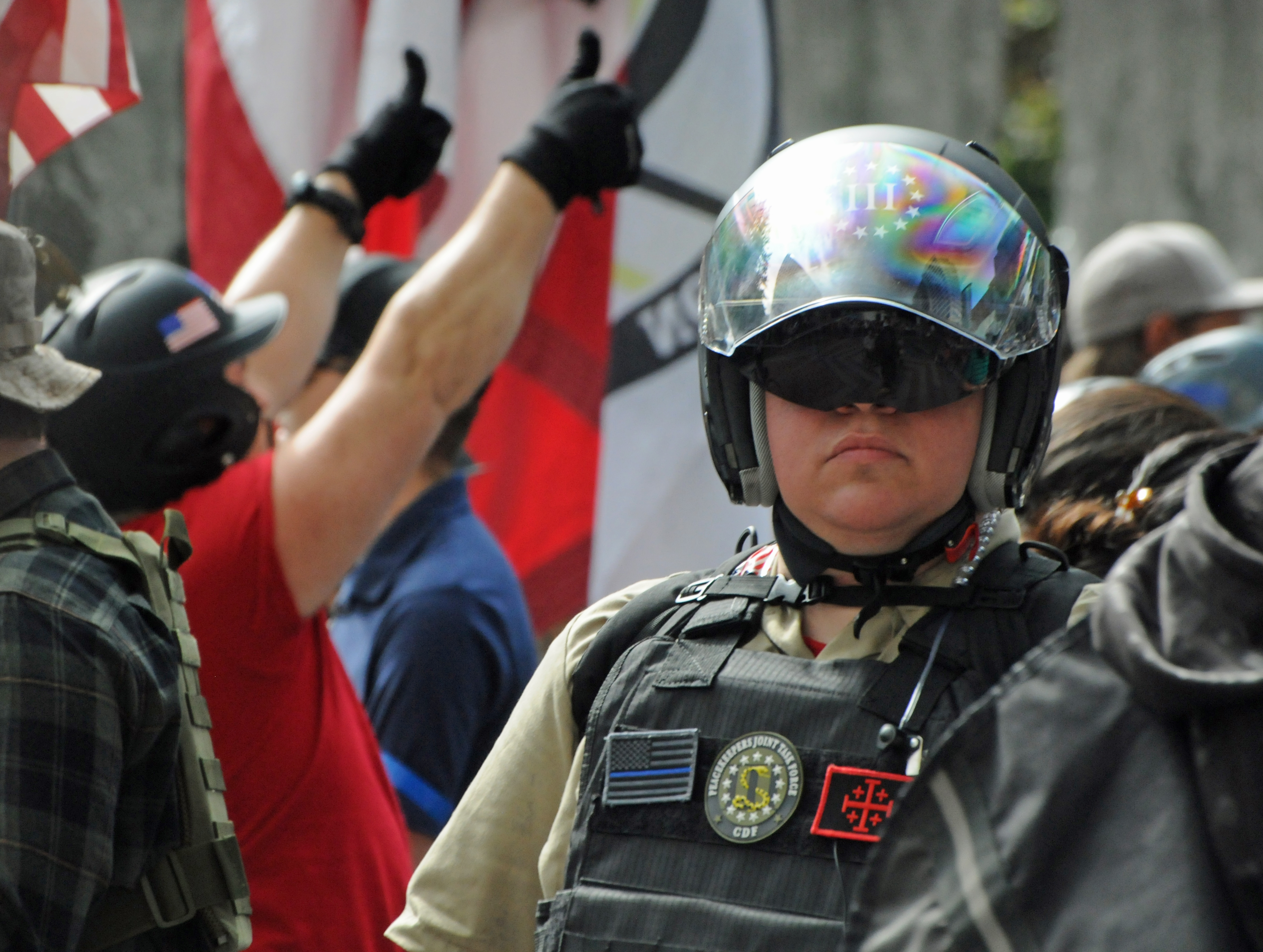 A number of body-armored "III Percent" militiamen provided 'security' for the event. Photo by David Neiwert.

Sunday’s march was more peaceful, with no brawls breaking out, though they threatened to on several occasions but appeared to be broken up by police intervention. Gradually, after several hours of speeches from a broad range of people, the rally broke down into several attempts at conversation between protesters and “Patriots,” though there were no signs that any new friendships were imminent.

Gibson was confronted near the stage by a young woman in Seahawks garb as he was trying to wrap things up. She wanted to know why he brought a “Trump rally” to Seattle. 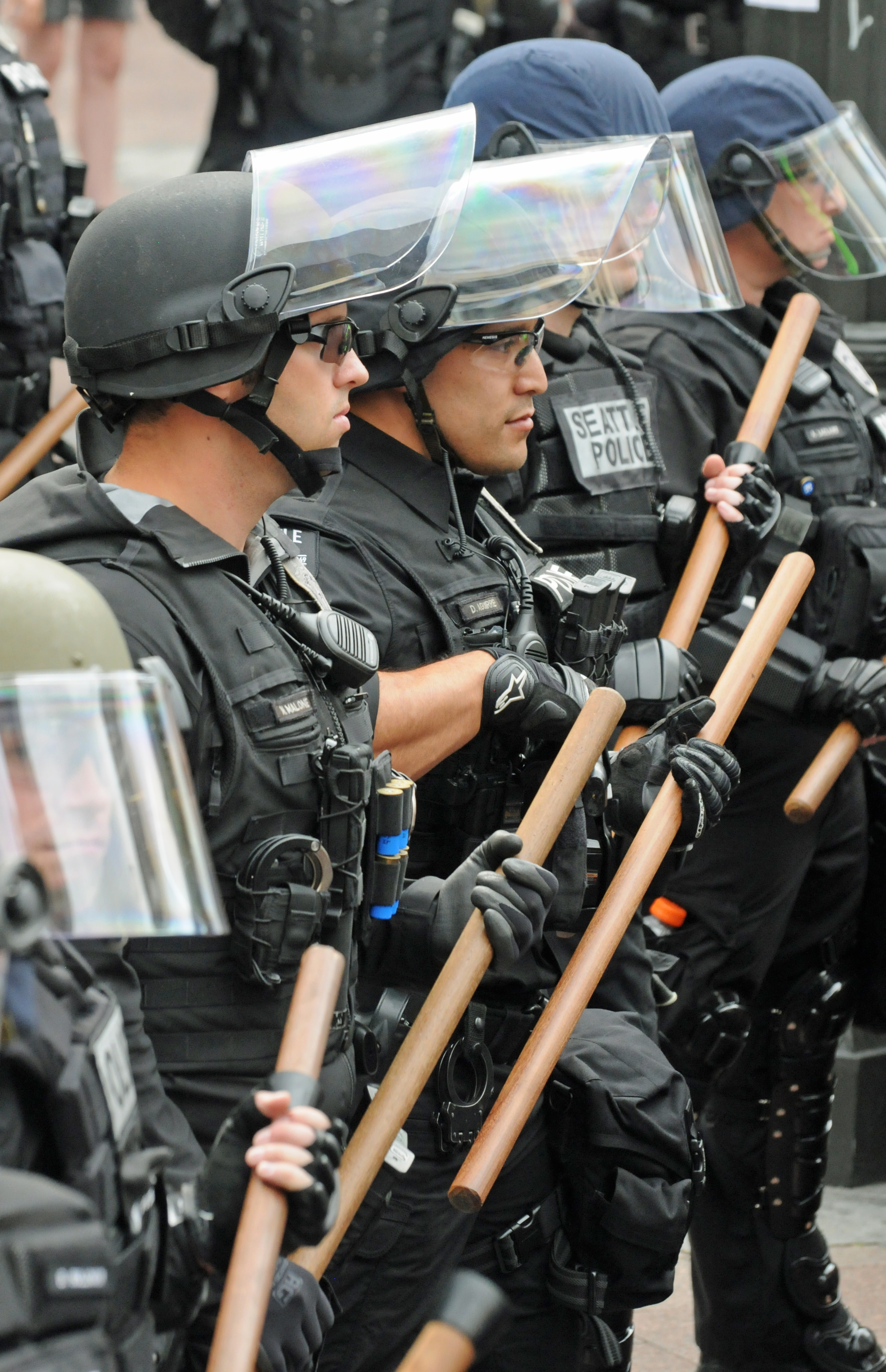 Seattle police made a heavy presence at the rally. Photo by David Neiwert.

“This isn’t a Trump rally,” Gibson told her.

“This isn’t a Trump rally?” she replied. “You’ve just got all these people in Trump hats, selling them Trump shit, bumper stickers, everything.”

A short while later, police ordered Gibson and his supporters to exit the park through a long police phalanx that protected them from the protesters. Gibson was among the last to leave.

Among his next events is an August 26 event in San Francisco he is calling “Freedom Rally San Francisco,” scheduled for Chrissy Field Beach. As with Gibson’s previous events — including his “free speech” protest one week after a fatal stabbing of two men by an alt-right fanatic on a Portland train, as well as his attempt to provoke the “violent left” at the campus of Evergreen State College in Olympia, Washington – the effort clearly appears more an attempt to troll the left than a sincere effort at dialogue.