Joey Gibson and cohorts cancel events out of fears of violence, hold impromptu news conferences, then show up at Berkeley anti-racism rally and get assaulted.

SAN FRANCISCO — The weekend in the Bay Area didn’t quite work out as planned for Joey Gibson and his Patriot Prayer outfit.

It was supposed to be a weekend of fiery right-wing rallies, beginning with a “Freedom Rally” on Saturday at Crissy Field on the San Francisco waterfront, sponsored by Patriot Prayer, a Northwest-based “Patriot”/militia group. That was to be followed the next day with an anti-leftist rally across the Bay in downtown Berkeley.

Instead, both rallies were officially cancelled, with Patriot Prayer then shifting their appearance to another downtown San Francisco park, Alamo Square.  When police blocked everyone from entering the park, Gibson and his cohorts held a couple of impromptu press conferences instead, first south of the city in Pacifica, then a short appearance near the end of the afternoon at Crissy Field. 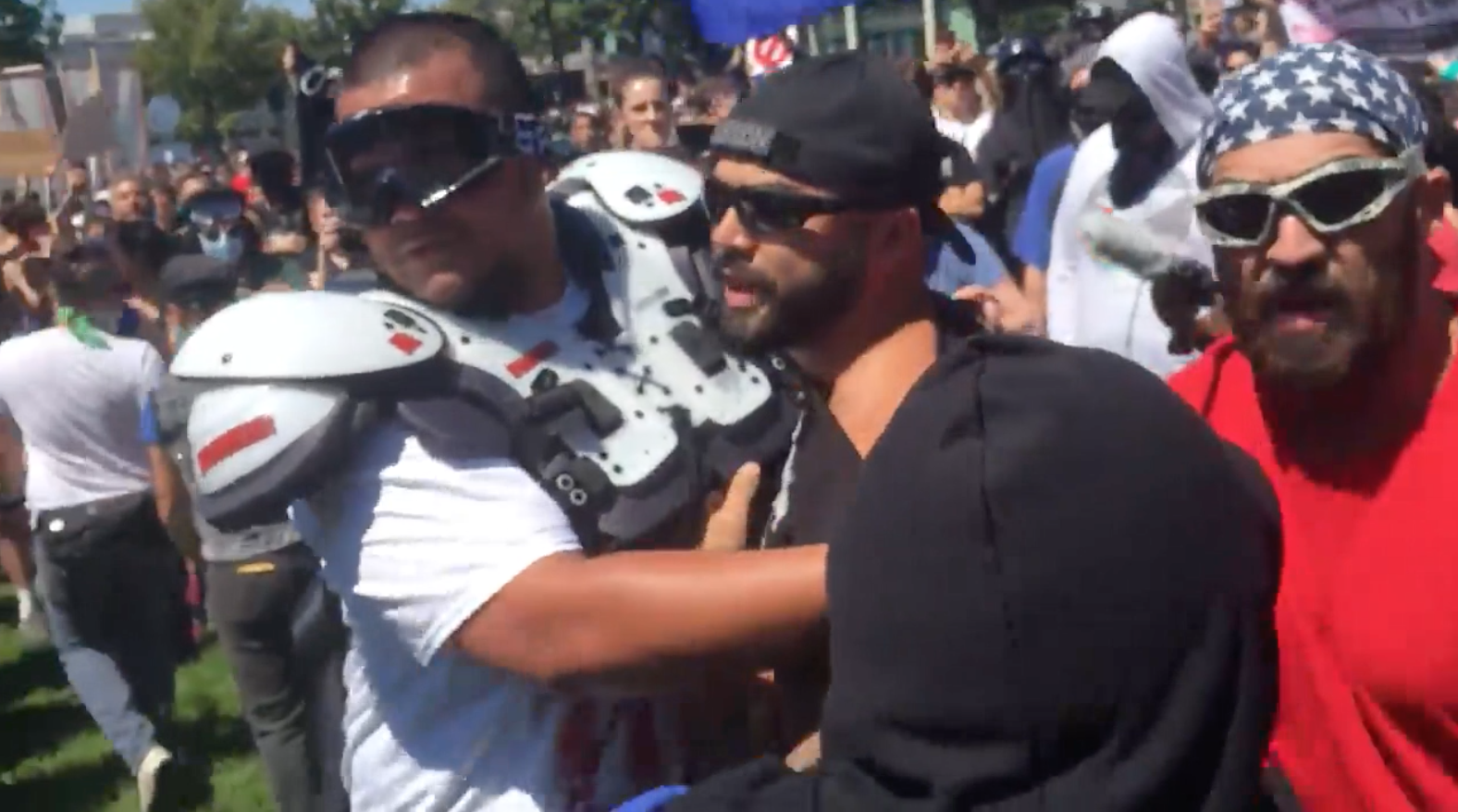 Joey Gibson, center, and his Patriot Prayer cohorts mix it up with Berkeley protesters. Image from video still.

Things went further awry the next day in Berkeley when, even though the “No to Marxism in America” rally had been called off, thousands of counter-protesters instead held a “Rally Against Hate” in a city park — and Gibson and some of his Patriot Prayer cohorts showed up.

They were almost immediately assaulted by a contingent of masked “black bloc” protesters who chased them out of the park and into the waiting arms of police, who took Gibson and his associate, Tusitala “Tiny” Toese, away in cuffs. They were later released.

The unfolding series of fiascoes began on Friday evening, when Gibson went on a Facebook Live stream and announced that the rally, planned for 2 pm Saturday, would not be held after all, and would be replaced by a “press conference.”

“So, after several conversations with the police, and understanding the situation and what’s going on, we’ve decided that tomorrow really seems like a setup — it doesn’t seem safe, a lot of people’s lives are going to be in danger tomorrow; the rhetoric from Nancy Pelosi, Mayor Lee, all these people are saying that we’re white supremacists and it’s bringing in tons of extremists. It just seems like a huge setup, so we decided we’re going to go ahead and take the opportunity and not fall into that trap, and we’re not gonna go down there, we’re not gonna have a rally at Crissy Field,” Gibson announced.

“We believe that this is kind of an opportunity to have basically a news conference at 2 p.m. in San Francisco at Alamo [Square] Park, to basically talk about some of the rhetoric in San Francisco,” he continued. 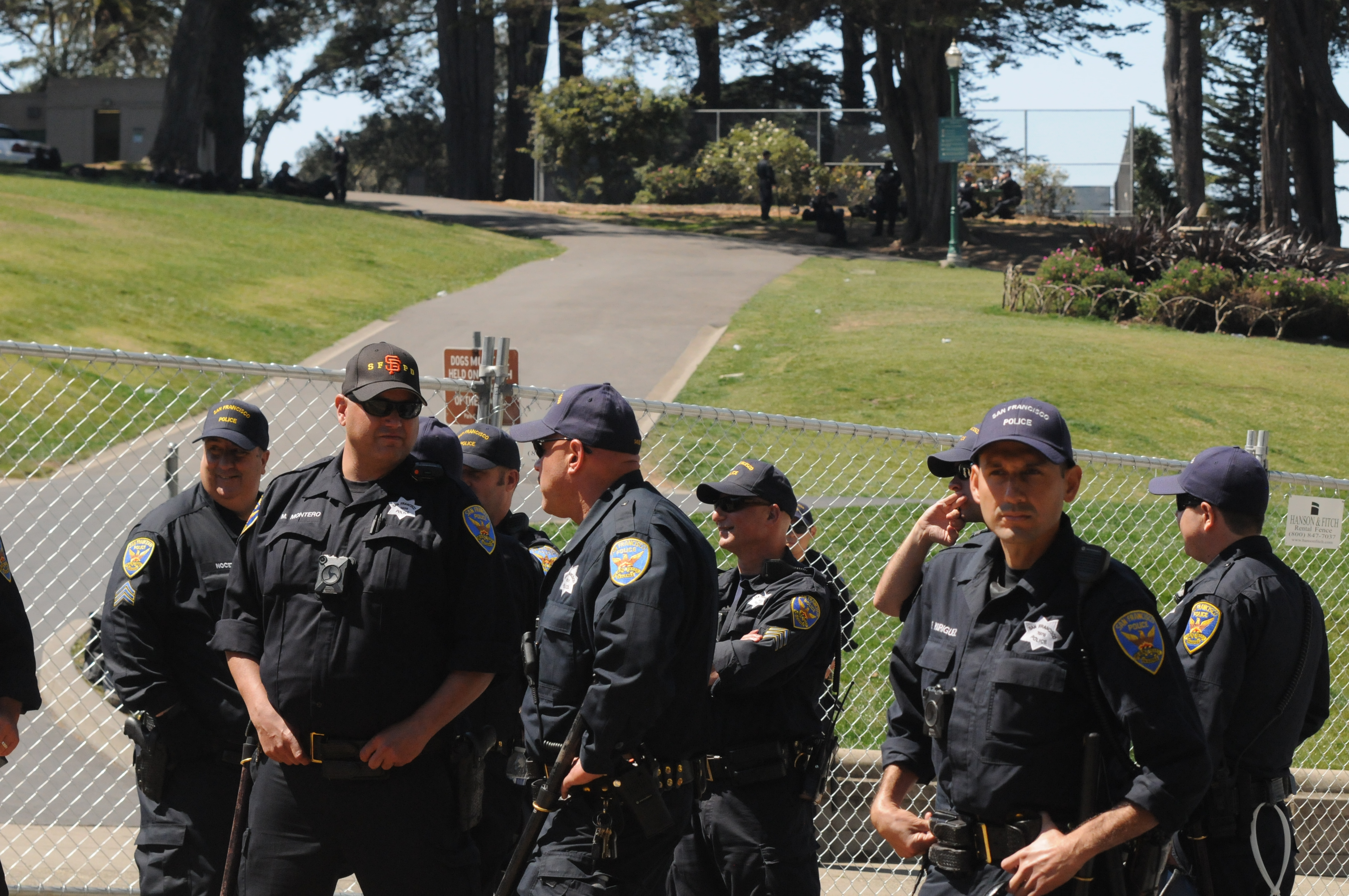 San Francisco police blocked off access to Alamo Square after Gibson announced he was planning to hold a press conference there. Photo by David Neiwert.

When 2 p.m. arrived the next day, however, the entirety of Alamo Square had been cordoned off and was being patrolled by a large phalanx of police who told the hundreds of protesters who showed up that no one was permitted into the park that day. Patriot Prayer did not make an appearance. 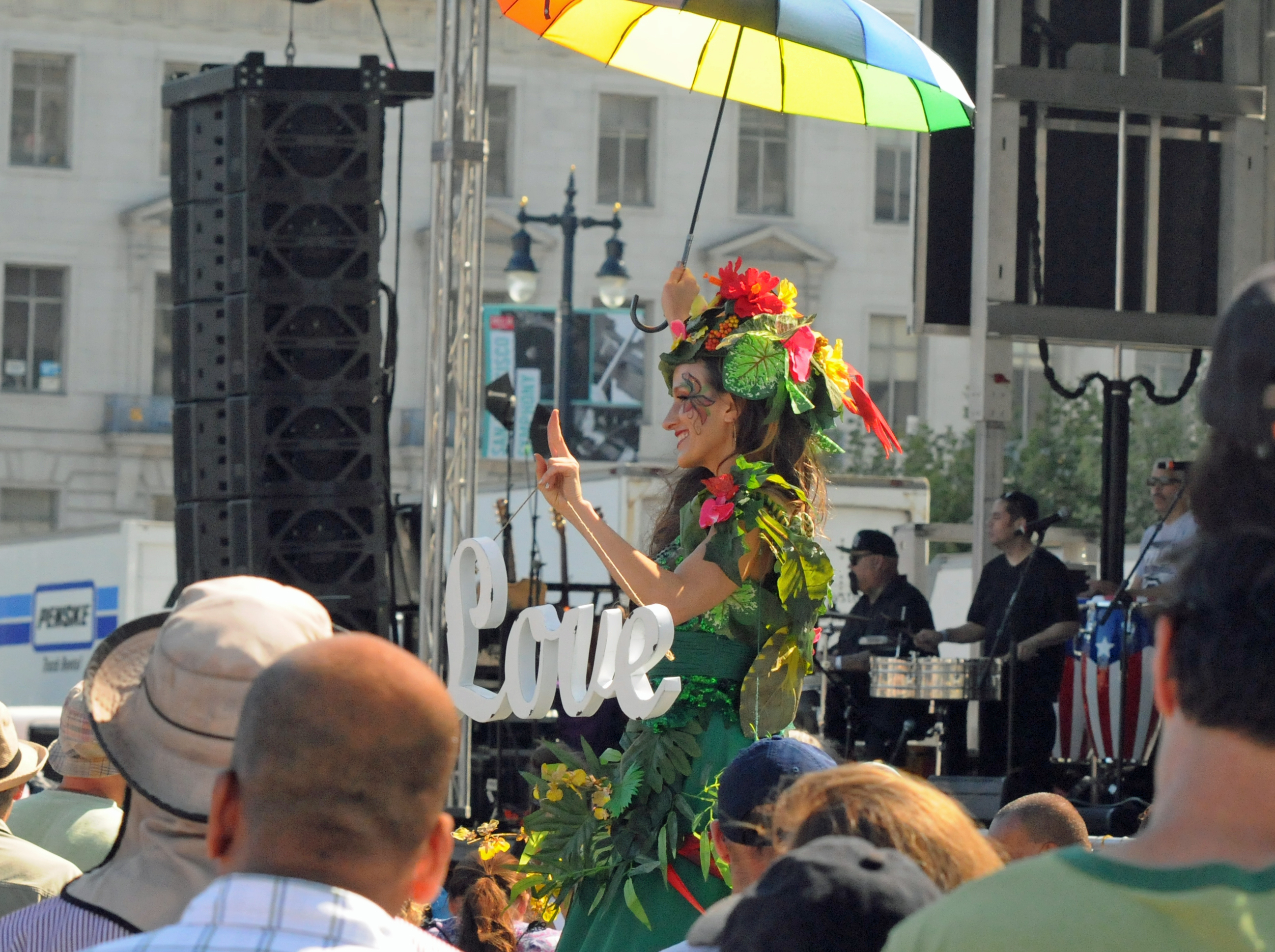 A "Rally Against Hate" at San Francisco's City Center attracted several thousand attendees over the course of the afternoon. Photo by David Neiwert.

About ten blocks away, a large “Rally Against Hate” intended as a counter-event attracted several thousand visitors over the course of the afternoon to the City Center plaza, as a number of local bands appeared onstage and provided music. Patriot Prayer did not make an appearance there, either.

Gibson instead held an impromptu press conference an hour later in the coastal suburb of Pacifica, blaming the helter-skelter nature of their schedule on threats from antifascists. Eventually, he showed back up near the end of the afternoon at Crissy Field, and again spoke with reporters there.

Most of his remarks revolved around a relatively new message from Gibson — namely, that he wants to bring “moderates” from “both sides” together to have conversations that would move the nation forward.

“These people hate that I am reaching out with moderates, they hate it,” he told reporters at Crissy Field. “Because when I bring moderates together, it gives the extremists no platform. That’s the key. That’s why we have to bring in these moderates.”

His idea of “moderate,” however, may be limited: “At the end of the day, I think the left needs to be responsible for speaking out against antifa and BAM,” he said. “I will continue to speak out against white supremacy and the extreme right, whatever. But let’s be honest — there’s not a thousand Klan members running through the streets burning stuff down, right now. But we have a thousand people wearing black burning stuff down.”

This approach is fairly new for Gibson. As recently as August 7 in Portland, most of the Patriot Prayer events in the Northwest have featured participation by white nationalists and even some local skinheads. Gibson himself has been prone to rhetoric that demonizes Muslims and liberals.

The next day, Gibson and Toese (who wore football pads for protection), along with a small number of other Patriot Prayer supporters, showed up in Berkeley amid the ongoing “Rally Against Hate” at a downtown city park. The group found itself surrounded by a screaming throng of black-clad antifascists, and as the barriers that held them back came down, a number of them came up and began pushing and hitting them. Gibson and his supporters quickly retreated down the street to a police barrier, where they were briefly taken into custody and released. Police officials later described the exchange as “a rescue.”

In the end, Gibson may have gotten exactly what he came for: scenes of violence by antifascist protesters, more media attention for himself, not to mention headlines around the nation describing the left-wing violence, and some street cred for having endured the assaults that his events seem designed to inspire.