When Trump was elected, far-right activists rejoiced at his victory at the ballot box, seeing a favorable candidate who ran on a platform of explicit xenophobia and nativism.

Now that love for the man who was going to build a wall on the southern U.S. border — and have Mexico pay for it — appears to have evaporated overnight.

Yesterday, in a press conference President Trump said he was “fairly close” to reaching a legislative deal with Democratic leaders on Deferred Action for Childhood Arrivals (DACA), which would spare at least 800,000 undocumented individuals brought to the U.S. as young children from deportation. He also stated at that same press conference that “the wall will come later.” The backlash from Trump’s base was swift and unrelenting.

One Breitbart headline screamed, “REPORT: TRUMP CAVES ON DACA, WANTS ‘QUICK’ AMNESTY FOR 800K ILLEGAL ALIENS.” The article featured quotes from leaders of the anti-immigrant movement, including Roy Beck of NumbersUSA and Mark Krikorian of the Center of Immigration Studies (CIS). (SPLC has previously reported that NumbersUSA and CIS are key institutions founded by anti-immigrant activist and White racial eugenics proponent, John Tanton.)

The outcry has also spread to Twitter, where according to one Breitbart headline “‘AMNESTY DON’ TRENDS AT NUMBER ONE ON TWITTER IN WASHINGTON D.C.” #AmnestyDon and #AmnestyDonald have gone viral. Trump supporters using the hashtags had some choice words for their (former) presidential hero.

One Trump supporter implied this was tantamount to the end of America:

Another, flipping Trump’s words in an earlier tweet, promised any action on DACA will “haunt” him in the same way Hillary Clinton’s “deplorables” came back to harm her campaign.

Trump in his characteristically inconsistent manner took to Twitter to downplay and defend his announcement of the deal.

In one pair of tweets he claimed that “no deal was made last night” and that, despite what he said earlier, border security and “building a wall” were not off the negotiating table:”

Of course members of his base weren’t buying it.

Cassandra Banks, former reporter for the Russian propaganda outlet Sputnik and an avid Trump supporter, responded with a raging meltdown: 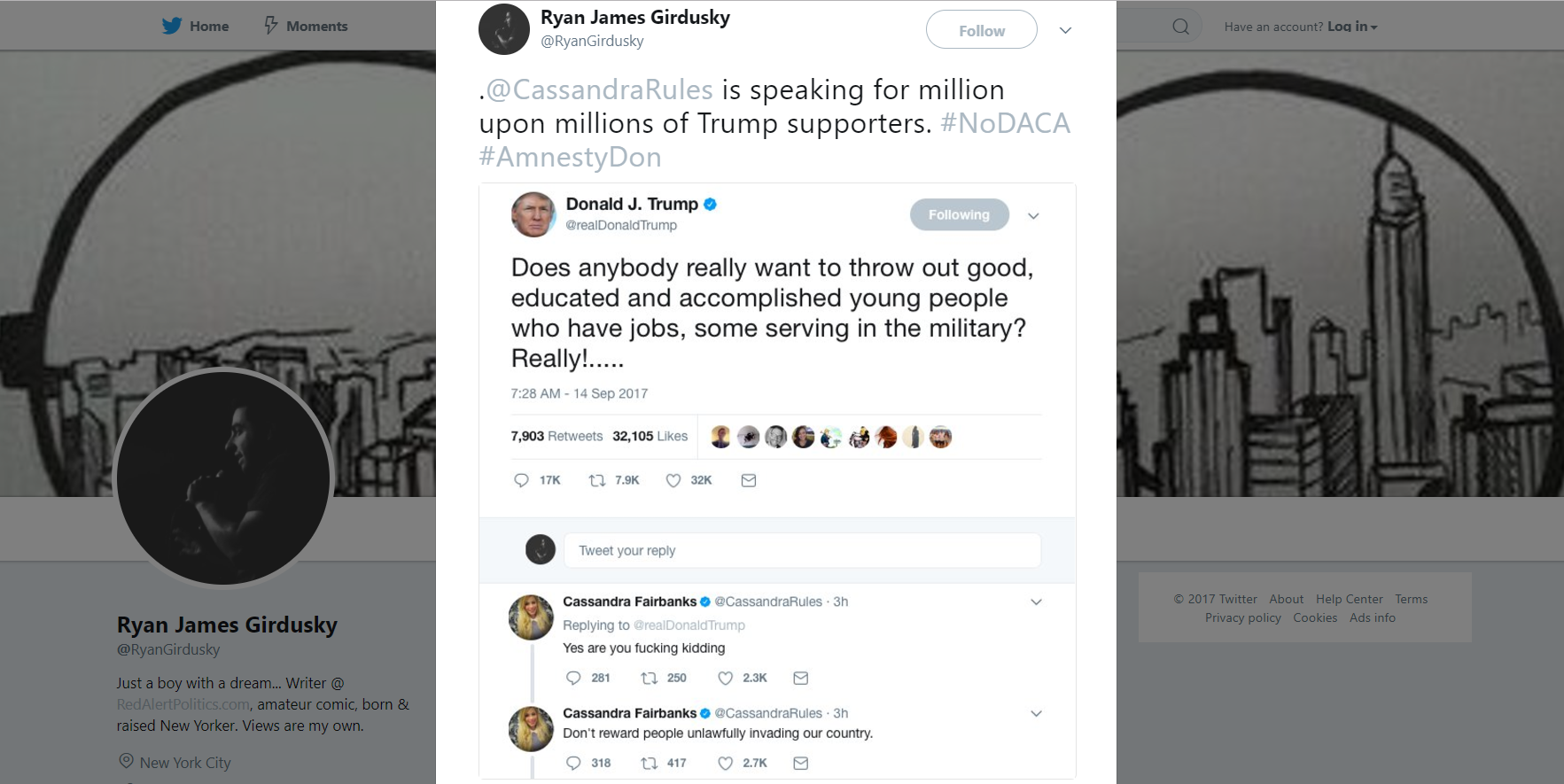 Because of Trump’s political apostasy, Banks was already wishing for the 2020 election cycle with White nationalist-friendly Ann Coulter and Steve Bannon as her choice presidential ticket:

One of the more colorful responses was from none other than the hardcore white nationalist site, Occidental Dissent, which referred to him as “Top C---.” This was followed by a photoshopped image of him and key administration officials, along with the anti-Semitic “happy merchant meme,” transposed onto a depiction of the assassination of Julius Caesar, who was represented by the face of an American bald eagle. The message here was clear: President Trump, once the hero of white nationalists and xenophobes stabbed the nation (and them) in the back.

There is no doubt that any legislative attempt to secure the safety and legal status of 800,000 undocumented individuals, brought to our nation as little children should be seen as a long overdue recognition of their humanity and contributions to our nation. However, we must remain vigilant during this administration, which is headed by a man who built his path to electoral victory on a campaign of nativist and white nationalist rhetoric and policies.