Yesterday, President-elect Donald Trump made his official appointments, selecting Republican National Committee Chair Reince Priebus as his chief of staff and Stephen Bannon, head of Breitbart Media who temporarily took a leave of absence to become Trump’s campaign manager, as his “chief strategist and senior counselor.”

The move to appoint Bannon to such an important role goes directly against Trump’s pledge to be a president to “all Americans.” Bannon has a long history of bigotry. Breitbart’s publishing strategy made it the media arm of the racist Alternative-Right movement, publishing articles promoting popular white nationalist tropes such as “black on white crime” and that "rape culture" is inherent in Islam.

Some of the key players in the Alt-Right movement, along with other well-established platforms for white nationalists have rejoiced in Trump’s appointment of Bannon to a key role.

Richard Spencer, a white nationalist who runs the “think tank” National Policy Institute (NPI, and one of the most prominent Alt-Right figures, took to Twitter last night to praise Bannon. “Strategist is the best possible position for Steve Bannon in the Trump White House," Spencer wrote. “Bannon will answer directly to Trump and focus on the big picture, not get lost in the weeds.” 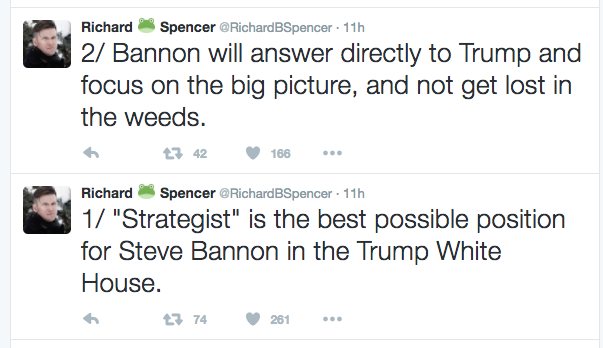 Andrew Anglin, whose neo-Nazi website Daily Stormer claims to be the “#1 Alt-Right” website, wrote, “I probably would have preferred Bannon as chief-of-staff and Priebus as press secretary,” before cross-posting NPR's story. Comments to Anglin’s post read, “Bannon is our man in the White House” and celebrated reports about Bannon’s alleged anti-Semitism.

Tony Hovater, a key member of the white nationalist Traditionalist Workers Party (TWP), who recently ran as a candidate for a New Carlisle, Ohio, City Council seat (and lost) responded gleefully on Facebook to Bannon’s appointment. “What timeline are we even on anymore? We’re like one or two degrees of separation away from the f------ President.” TWP is headed by another well-known white nationalist, Matthew Heimbach, who faces a charge of harassment with physical contact after he was filmed shoving a black woman at a Trump rally earlier this year.

Ken Reed, the national director of the neo-Nazi group Aryan Renaissance Society, posted a news story about the Bannon appointment to a Facebook group with the comment, “Can you say WINNING boys and girls???” and followed with the hashtags #WhiteLivesMatter and #AltRight.

Stormfont, the oldest neo-Nazi message board on the web, has many users cheering Trump’s decision to appoint Bannon. User Phoenix1933 wrote:

“Stephen Bannon: racist, anti-homo, anti-immigrant, anti-jewish, anti-establishment. Declared war on (((Paul Ryan))) Sounds perfect. Muhahahaha. The man who will have Trump’s ear more than anyone else. Being anti-jewish is not illegal. Nothing you dirty stinking jews can do to keep him out.”

A Stormfront user reacts to the appointment of Stephen Bannon “chief strategist and senior counselor.”