The past few weeks and month have been illuminating for those observing the bizarre statements and behaviors of John Guandolo, an anti-Muslim conspiracy theorist and founder of the for-profit law enforcement training company, Understanding the Threat (UTT).

He and his organization have gained attention and notoriety for passing off anti-Muslim conspiracy theories and stereotypes as professional counterterrorism training.

Recently, Guandolo and UTT have taken the rhetoric to new heights.

Character attacks against Muslim organizations by voices from the anti-Muslim movement are nothing new. However, it is one thing to engage in verbal assaults against an individual or organization, and quite another to call for actual physical violence against a target.

Yet that’s exactly what the UTT’s Twitter account appears to have done on October 27, when it posted a tweet claiming the Council on American-Islamic Relations (CAIR), an American Muslim advocacy group, “is a terrorist group,” and ominously declared, “They should be treated as such.” Included at the bottom of the post was what appears to be a manipulated picture of missile strike footage with the words “CAIR HQ” at the center of the photo’s crosshairs. 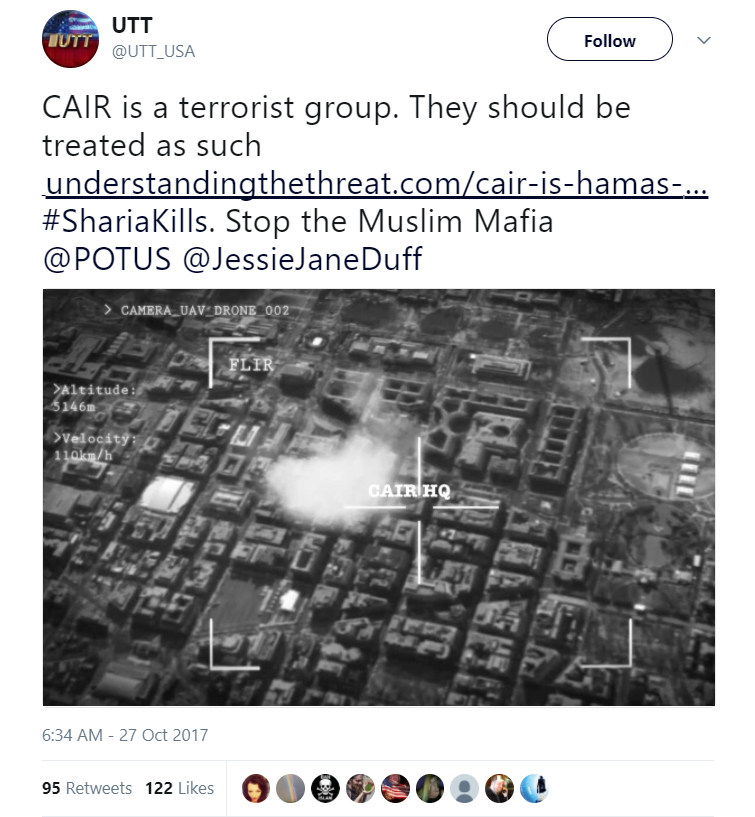 The post was retweeted on the personal accounts of UTT’s two employees, Guandolo and Chris Allen Gaubatz, who is best known for posing as an intern at CAIR and then stealing its documents.

It also appears that not only is the rhetoric becoming more extreme, but so are the people UTT is seeking to associate themselves with. The same day UTT posted the bombing tweet, it also put up a post promoting a book that has become popular within the anti-Muslim movement, Interestingly the promotion post was tweeted at Jack Posobiec, a troll who is infamous for promoting multiple conspiracy theories, such as Pizzagate and the unfounded accusation that Seth Rich was murdered by the Democratic National Committee.

The animosity and paranoia behind these eye-opening posts are not confined to a single day. A few weeks prior, while presenting at a “seminar” hosted by a group called Counter-Terrorism Cell in Las Vegas, Guandolo propagated the unsubstantiated claim, already dismissed by the FBI, that the mass shooting committed by Stephen Paddock was “a jihadi” operation. In the same presentation, Guandolo also claimed that there was likely a second shooter. (A person attending his presentation, who said they were familiar with the Mandalay Bay security and floor layout, vociferously disputed Guandolo’s speculation about a second shooter.) 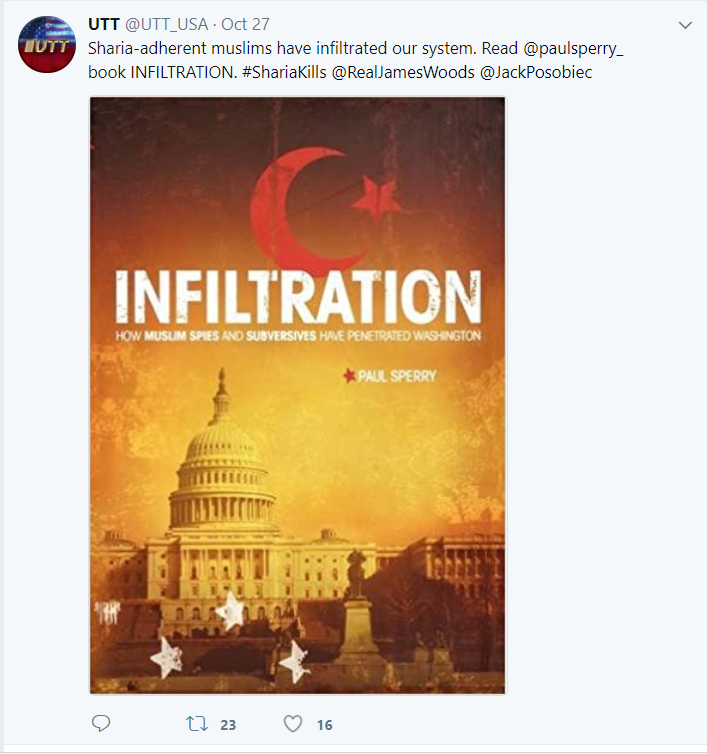 No longer content with UTT’s dismissed claim that Las Vegas was merely a “jihadi operation,” two days ago Guandolo himself doubled down and upped the ante, asserting, “Now reports are circulating that FBI has uncovered Antifa & Islamic State are working together. UTT sources in CA comfirm [sic] it there.”

All of this also comes against the backdrop of legal allegations, first revealed by the Center for New Community, that Guandolo had physically assaulted Hennepin County Sheriff Richard Stanek at a National Sheriff’s Association conference in August of this year. Two days ago, on October 30, an investigative news report by a local television station in Minneapolis, Minnesota, broadcast audio from the altercation between Guandolo and Stanek. The news report noted that the claims were quietly dismissed by local prosecutors.

Speaking to SPLC’s Hatewatch, Corey Saylor, Director of CAIR’s Department to Monitor and Combat Islamophobia noted, “John Guandolo, and his company Understanding the Threat, can only teach law enforcement what not to do. His wild allegations are a prime example of unprofessional investigative work.”