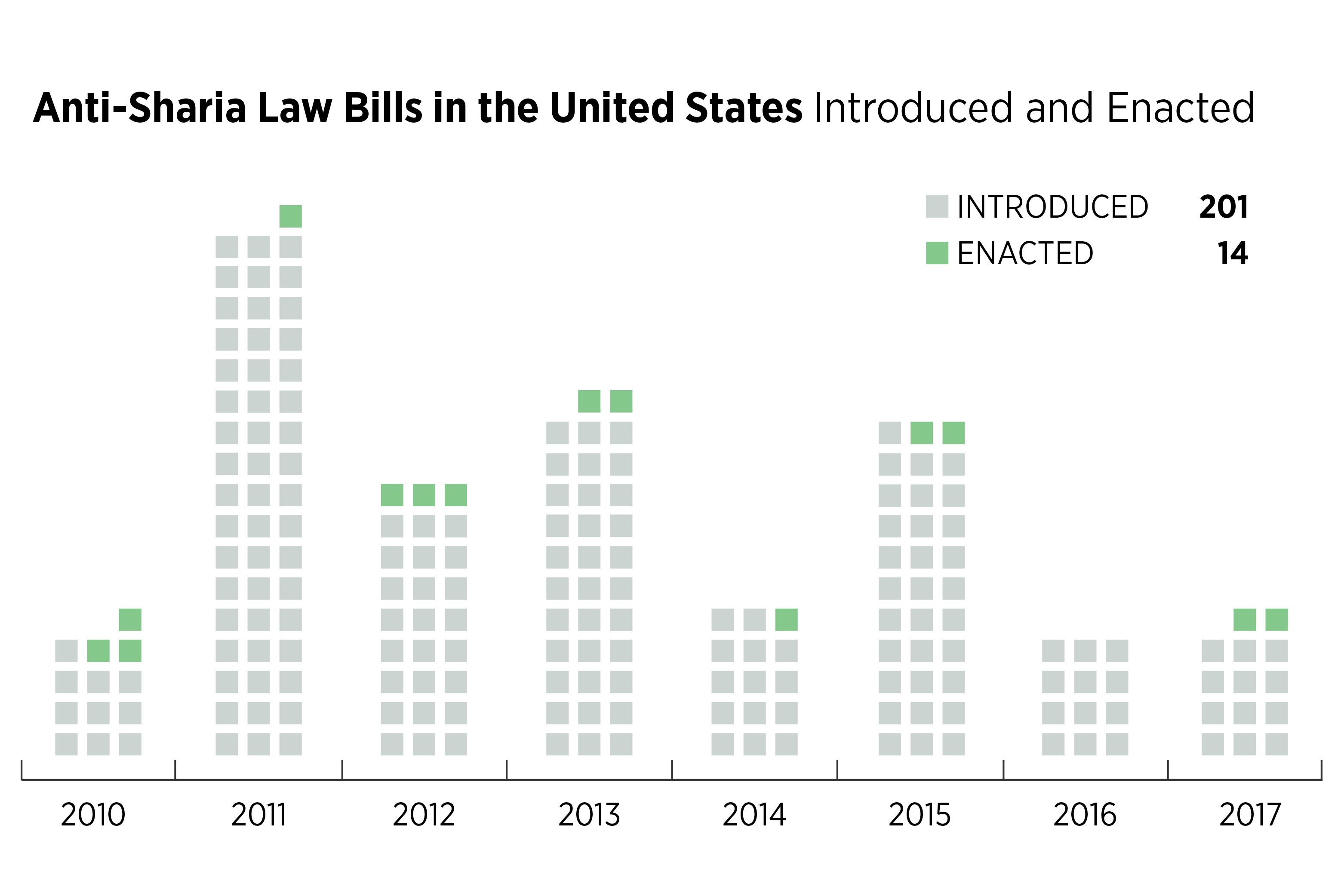 One of the most successful far-right conspiracies to achieve mainstream viability, the mass hysteria surrounding a so-called threat of “Sharia law” in the United States is largely the work of anti-Muslim groups such as the American Freedom Law Center and ACT for America (ACT), an SPLC-designated hate group. In June, so-called “anti-Sharia” rallies organized by ACT were held across the country and attracted white nationalists, armed right-wing militias and even neo-Nazis.

David Yerushalmi, the father of the anti-Sharia movement, serves as co-founder of the American Freedom Law Center (AFLC) and General Counsel of the Center for Security Policy. AFLC has pushed its initiative, American Laws for American Courts (ALAC, principally authored by Yerushalmi, since 2010. Politicians in just eight states have not joined this concerted project of stoking fear of Islam. Guy Rodgers, the former executive director of ACT for America, the largest grassroots anti-Muslim group in the country, concedes that there is no real influence of Islam in courts but says, “Before the train gets too far down the tracks it’s time to put up the block.”

The majority of anti-Sharia legislation introduced across the country incorporates the American Laws for American Courts model legislation published on the American Public Policy Alliance’s (APPA) website. This sort of language typically includes a clause prohibiting foreign law in American courts where it would result in a conflict with rights guaranteed by the constitution of the state or the United States. This legislation is totally useless — the U.S. Constitution already expressly denies authority to any foreign law. In fact, Yerushalmi himself admits:

What is “Sharia law”?

The term “Sharia law” is a misnomer because sharia is not actually a law or a universally-defined legal code, but a set of guiding principles to living a moral life set out in the Quran. Many representatives, in their introduction of anti-“Sharia law” bills, mention the “invasion” of ‘sharia law’ and the urgent need to stop it from entering American courts.

Upon further inspection of Yerushalmi’s campaign to create a fear of Sharia, it is not so far fetched that the general public is falling for it. The SPLC has previously documented the problematic findings of simple Google searches such as, “what is sharia,” and “sharia and the us constitution.” Anti-Muslim propaganda represent the majority of the findings.

Similar to other religious scriptures, sharia may be considered in court matters (although rarely and infrequently), including family disputes and torts with foreign countries, but federal and state laws always take precedence. Still, Yerushalmi has drafted several iterations of anti-Sharia bills. In 2006, he drafted anti-Sharia legislation with his organization, Society of Americans for National Existence (SANE), which stated:

“It shall be a felony punishable by 20 years in prison to knowingly act in furtherance of, or to support the, adherence to Shari'a.”

Speaking on the topic of Muslims, he added:

The Mythical ‘moderate’ Muslim … the Muslim who embraces traditional Islam but wants a peaceful coexistence with the West, is effectively non-existent.

However, in 2010, a judge in New Jersey made an error in his interpretation of this diverse religious legal tradition, and Yerushalmi has exploited this to serve his larger anti-Muslim movement ever since.

In 2010, a Moroccan Muslim woman, who entered into an arranged marriage with her Moroccan Muslim husband just two months before, asked for a restraining order against him, alleging he had been raping her. The husband allegedly said he didn’t believe he was doing anything wrong because they were married and “this is according to our religion.” The New Jersey judge did not grant the restraining order, citing lack of criminal intent.

The New Jersey Appellate Court reversed the decision shortly after, recognizing that the consideration of religious beliefs is not applicable without the authorization of American law. In other words, the U.S. Constitution prevents any foreign law from primarily being used in the United States.

Nevertheless, the anti-Sharia movement led by Yerushalmi, AFLC, APPA and other anti-Muslim organizations have taken advantage of this overruled decision in their American Laws for American Courts initiative instead of learning from the short-lived mistake of one New Jersey judge.

The harm of anti-Sharia legislation

“Anti-Sharia” bills are rarely explicitly labeled as such. Most legislators include the phrase ‘foreign law,’ and present bills as the solution to a larger influence of all foreign countries and religions. However, APPA explicitly says this legislation was created, “to protect American citizens’ constitutional rights against the infiltration and incursion of foreign laws and foreign legal doctrines, especially Islamic Sharia Law.”

It is not just the drafting of this legislation that is problematic, but also that anti-Muslim organizations are working directly with legislators to pass this sort of bill. With entities like ACT and Center for Security Policy on the frontlines of this movement, they are also heavily increasing anti-Muslim rhetoric.

The rise in legislation and anti-Muslim rhetoric within state legislatures is not without consequence for Muslim communities. In fact, hate crimes against Muslims increased by 67 percent according to FBI statistics released in 2015. In March, three Muslim students attempted to visit Rep. John Bennett in the State Capitol in Oklahoma City. Before meeting with them, Bennett insisted they fill out a questionnaire about Islam which included questions like, “The Koran, the sunna of Mohammed and Sharia Law of all schools say that the husband can beat his wife. Do you agree with him?”

Experts including professors, attorneys, politicians, and the American Bar Association (ABA) have been quick to denounce anti-Sharia law bills. In response to an uptick in anti-“Sharia law” bills introduced in 2010 and 2011, the ABA published a formal letter of dissent, saying in part:

"The American Bar Association opposes federal or state laws that impose blanket prohibitions on consideration or use by courts or arbitral tribunals of the entire body of law or doctrine of a particular religion,” adding, “… American courts will not apply Sharia or other rules (real or perceived) that are contrary to our public policy, including, for instance, rules that are incompatible with our notions of gender equality."

The ABA further discussed the concerns of highly publicizing this type of legislation. The mass hysteria created by these organizations and further perpetuated by politicians at state and federal levels, is alarming. The misconstrued understanding of both Sharia and the United States constitution by these groups has sought to create an actionable goal of exterminating Islam. Some states, including Tennessee, have explicitly named ‘Sharia organizations’ and Muslims, the enemy.

“The threat from sharia-based jihad and terrorism presents a real and present danger to the lawful governance of this state and to the peaceful enjoyment of citizenship by the residents of this state;” adding, it further authorizes the attorney general to designate “Sharia organizations,” defined as “two (2) or more persons conspiring to support, or acting in concert in support of, sharia or in furtherance of the imposition of sharia within any state or territory of the United States. Anyone who provides material support or resources to a designated Sharia organization could be charged with a felony and face up to 15 years in jail.”

Driven by hate groups, the ALAC initiative has created unfounded fear, and has sought to demonize Islam and American Muslims across the nation through legislation and rhetoric.