A man who recently declared his willingness “to die right here and now” and become a “martyr” for his cause was among a group of patriot activists who were kicked out of a Sen. Bernie Sanders speech on Sunday in Phoenix.

Harim Vargas, who goes by the pseudonym Harim Uziel and calls himself “The Hardcore American Patriot,” was in Arizona over the weekend as a guest of Patriot Movement AZ (PMAZ), a group whose members have engaged in anti-immigrant and anti-Muslim activities. He was among a handful of activists from California invited to town to speak at a “Trump Unity Rally” organized by PMAZ on Saturday, March 10.

A day after the rally, on March 11, multiple PMAZ leaders and their California allies decided to crash the Sanders event, which also featured speeches by two Arizona congressmen. Videos posted online show Vargas among the crew who heckled the politicians from the crowd, angering people around them and leading to security being called. The crew was eventually told to leave and escorted out of the building.

Phoenix police spokesman Sgt. Alan Pfohl told the Southern Poverty Law Center in an email this week that “approximately five people” were asked to leave the event. Videos show more than that were removed, however, and an Arizona Republic journalist inside the event estimated the number was seven to 10. Pfohl said those who were kicked out were given verbal warnings by the police that they could be cited for trespassing. He declined to release their names.

It was the second time in eight days Vargas had a run-in with police. On March 3, Vargas got into a shouting match with a stranger inside a terminal at the Austin-Bergstrom International Airport in Texas. The profanity-filled tirade led employees at three gates to call for Austin police officers to intervene.

American Airlines ended up preventing Vargas, who had a large Donald Trump flag draped over his shoulders, from getting on his flight, and then denying him a seat on a later flight, citing security concerns.

Multiple police officers ended up escorting Vargas out of the secure area of the terminal and stood around him as he waited at the ticket counter for a refund. Vargas livestreamed videos of his encounters with the airport police on Facebook.

“Fascism at its finest,” Vargas said as he was being escorted out of the secure area. “But you know what, I’ll be a martyr, ‘cause I love America and I love Trump.”

At the ticket counter, he told his viewers on Facebook that he might end up dying at the airport.

“My patriots, I will not commit suicide,” Vargas said. “So if I’m found dead, it’s not me. But I’m willing to die, right here and now — for America. I love America.”

On Facebook, Vargas says he lives in Los Angeles and often points out that he’s Latino and a Sephardi Jew. Launching a GoFundMe campaign last year, he wrote that he was unemployed but was hoping to become a full-time paid protestor and activist with the help of donors. He also has a PayPal account to accept donations.

Vargas had been in Austin to speak at a March 3 rally held on the steps of the state capitol. From there, he traveled to Phoenix for the “Trump Unity Rally” hosted by Patriot Movement AZ.

A YouTube video of Vargas’s speech in Phoenix showed him briefly acknowledging his problems.

“I’m a little bit out there,” Vargas told the crowd. “I know I gotta calm down a little bit also, ‘cause I get in trouble.”

But his speech turned to blaming “communists” for his woes rather than taking responsibility for them himself. 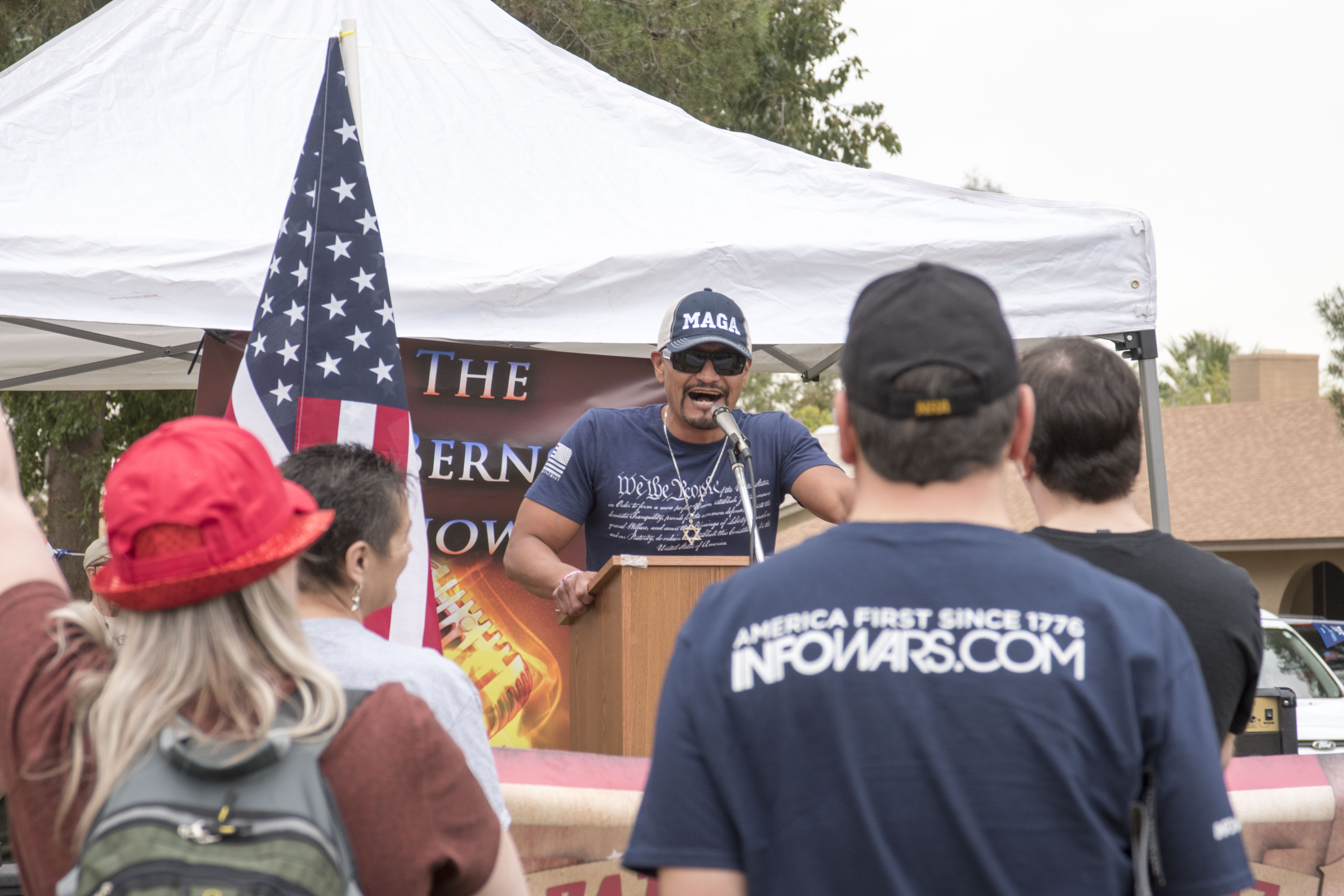 “Facebook is censoring us. Over there in California, they’re censoring us. You know what, it’s like we’re becoming a communist country,” he said. “Sometimes I’m afraid that I’m going to get pulled over and I’m never going to see me family again. And then I’ll never see anyone again. You know, I’ll be locked up by communists, because that’s how they want to turn this country.”

It’s unclear whether Vargas himself has been armed during encounters with police. But a Los Angeles Times article from June said he was in a car with a fellow Trump supporter who allegedly waved a gun at a group of people. Law enforcement surrounded the car, guns drawn. Vargas streamed the incident live on Facebook.

"We did show a gun. Oh, may the Lord protect us and keep us safe," the Times quoted Vargas saying in the video. "I got my hands up. Don't shoot."

More recently, Vargas made another reference to guns hours after getting kicked out of the Sanders event.

Members of Patriot Movement AZ and their California allies were at the main Arizona State University campus in Tempe, Arizona, to put up flyers that included photos and descriptions of people who had been killed by undocumented immigrants. The patriot crew was doing it in response to a local group of anti-fascist activists who recently tore down similar flyers that had been put up on campus by members of the white nationalist group Identity Evropa.

In a video posted to Facebook, Vargas said the patriot group was expecting a confrontation with the anti-fascists, and that they had already seen two anti-fascists on campus, but it was OK because the patriots were armed.

“We do have a couple of antifa guys,” Vargas told his viewers on Facebook. “They’ve been peaceful, but they did make a call right now, calling other antifas to come and protest us peacefully. So, you know, it’s all good. This is an open carry state, so our patriots are packing. So we all good.”

If Vargas was telling the truth, anyone “packing” may have been breaking rules that prohibit guns on the campus of Arizona State University. Messages to the ASU police department seeking comment were not returned this week.

One person with the anti-fascist group could be seen on the video being detained by police. No one from the patriot group was detained, and it did not appear based on the videos that police searched anyone for weapons.

The patriot group declared the mission a success, and some suggested returning to the ASU campus once a month to repeat the events.

Early the next morning, Antifascist Action Phoenix posted a photo online showing they had still managed to take down many of the patriot group’s flyers and had burned them in fire.

“We successfully removed hundreds of racist posters and symbols and then had a nice barbecue,” the group wrote. “No place on a college campus for grown ass men in their 50’s and their ‘old ladies’ to be harassing students of color or any student for that matter.”