On Sunday evening, Republican U.S.  Senate candidate Joey Gibson — who has long insisted that his Patriot Prayer organization’s rallies are simply a celebration of “freedom and God” — dropped the pretense: they were ready to fight.

At Portland’s Terry Schrunk Plaza, rallygoers were greeted by Gibson’s right-hand man and Proud Boy Tusitala “Tiny” Toese, who told them to prepare for a “physical fight, whatever kind of fight — we’re coming… and we’re gonna raise hell.” Late last year, Toese was charged with harassment, assault and disorderly conduct.

Patriot Prayer billed Sunday’s event as “Tiny’s last march before he leaves to go back to his island” of American Samoa. It was unclear what political message the rally was meant to convey and, unlike the group’s other recent demonstrations, contained no formal speeches. Instead, Gibson and Toese gave brief pep talks as the “patriots” marched through a small loop of downtown and antagonized groups of counter-protesters, including some who were members of the anarchist “black bloc.”

Clashes broke out between the two sides before the scheduled march even started and continued sporadically throughout the evening. Both sides hurled fists, pepper spray and rocks at each other. At one point, Patriot Prayer shut down a verbal confrontation with a counter-protester by spraying the man directly in the face with a fire extinguisher.

This was perhaps Patriot Prayer’s most violent rally, but it also the smallest gathering of Gibson’s supporters yet. Attendance at his rallies has been on the decline.

Patriot Prayer and members of the “western chauvinist” hate group the Proud Boys taunted those on the other side, calling them “f------” and chanting “Punch a commie a day, keep the fascists away!”

Patriot Prayer marched through downtown until police in riot gear separated the clashing marchers on opposite sides of a street. After a police officer told Gibson they had probable cause to arrest some of the men on his side and would do so unless they left, Gibson and a number of Proud Boys departed downtown in a bus they had chartered. 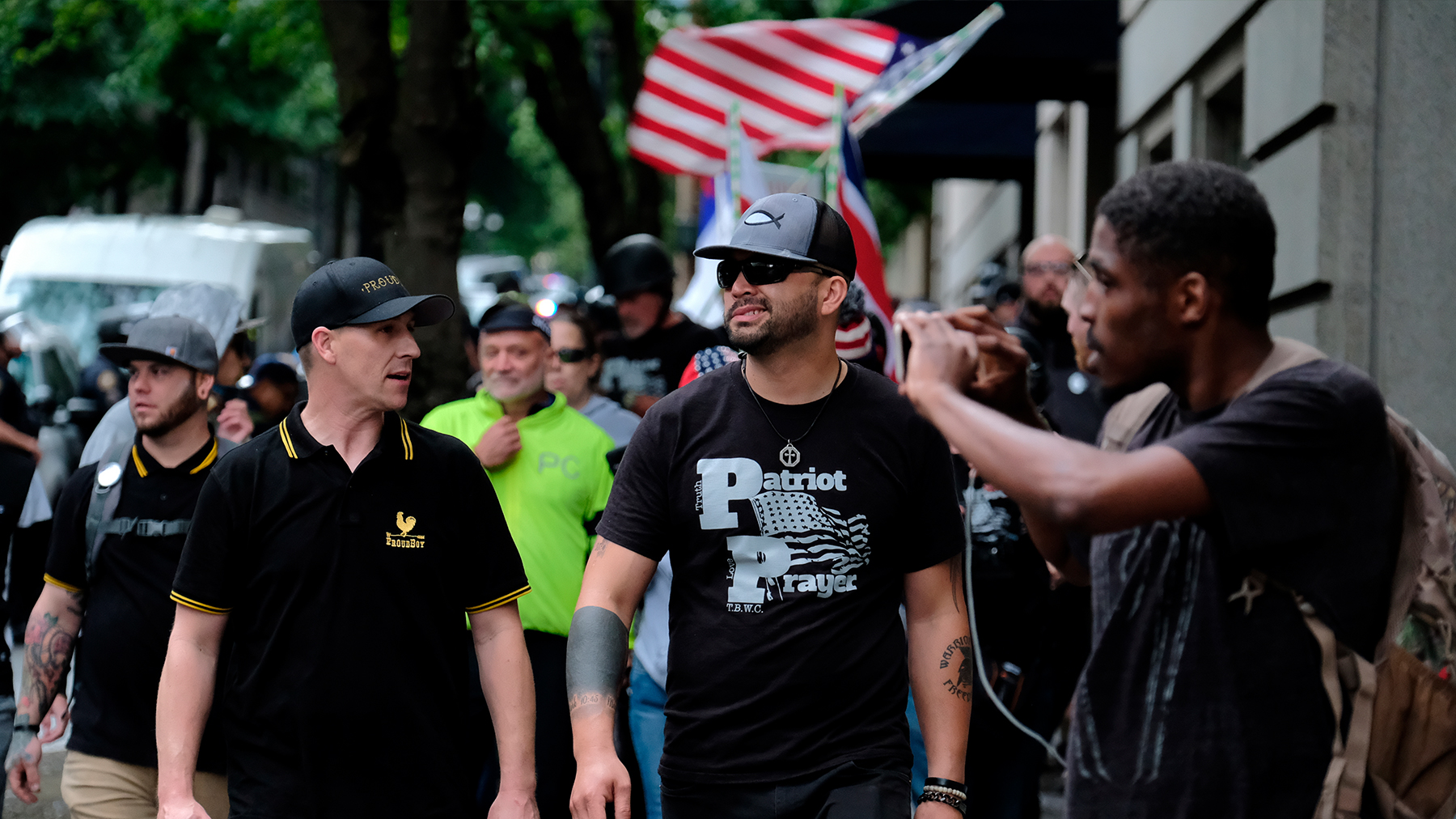 According to police, four people were arrested during the course of the demonstration.

Gibson’s purported purpose is to defend “love and “freedom,” and he paints liberals and left-wing activists — especially Antifa — as the largest threat to those values. His brand of politics is always confrontational: with militant alt-right groups, he coordinates rallies that attract neo-Nazis, white nationalists and other far right extremists in order to incite brawls and perpetuate a narrative of rampant leftist violence.

The symbol of the Fraternal Order of Alt-Knight (FOAK) — the militant wing of the Proud Boys who attend right-wing rallies suited up in homemade armor in the hopes of having it out with leftist protesters — recently appeared as a watermark in the corner of a video of one of Gibson’s speeches that he posted to Facebook, seemingly declaring his alliance with the group.

Sunday’s rally was only the most recent in a string of Patriot Prayer demonstrations that have ostensibly been held to draw attention to Gibson’s longshot U.S. Senate campaign in Washington state. Two weeks ago during an “open carry” march, Gibson, Toese and four other far-right activists were detained in a parking garage by Seattle police after they were seen with guns on the University of Washington’s campus, where firearms are prohibited.

The date of this march was significant: it came one year after Patriot Prayer’s most notorious rally — organized with FOAK’s leader Kyle “Based Stickman” Chapman — when some 300 of their supporters descended on Portland, resulting in 14 arrests. That demonstration was held just over a week after 35-year-old Jeremy Christian killed two people and seriously wounded another on a Portland MAX train after they attempted to intervene as he verbally attacked two Muslim women.

Members of Identity Evropa, the Traditionalist Worker Party and True Cascadia have been spotted at Patriot Prayer demonstrations. Even though Gibson denounced white supremacy at an August rally last year, its adherents have continued to show up.

One of the white nationalists in attendance at this most recent rally, Allen Pucket, was filmed kicking and punching a counter protestor in a parking garage. The attack appeared unprovoked, and the man took several hits before someone on the Patriot Prayer side led him away to the police.

Pucket is a member of the Hell Shaking Street Preachers (formerly the Bible Believers), who last year verbally harassed immigrants outside of their churches in Portland and protested against the LGBT community at the city’s Pride parade. He’s espoused white supremacist beliefs on social media, including the maxim “Diversity is code for White genocide.” Pucket was also filmed kicking a left-wing protester — while standing alongside Identity Evropa-founder Nathan Damigo — at a pro-Trump rally last summer in Berkeley.

Proud Boy Donovan Flippo also participated in the parking garage attack, hitting the man repeatedly over the head with a helmet. And it’s not the only time he’s become violent at a Patriot Prayer event: last August, he kicked a counter-protester who had fallen to the ground in a scuffle at a Portland rally.

Those on Gibson’s side sustained injuries as well. After freeing himself from the grip of a man restraining him, Andrew Arbo wound up in a chaotic scuffle and suffered a bloodied nose. Police carried him away and subsequently charged him with second-degree disorderly conduct.

Arbo later tweeted at an antifascist account, “You’re gonna have to kill me to stop me.” “Really am fighting so hard not to give into my most destructive impulses after last night,” he posted the next day. 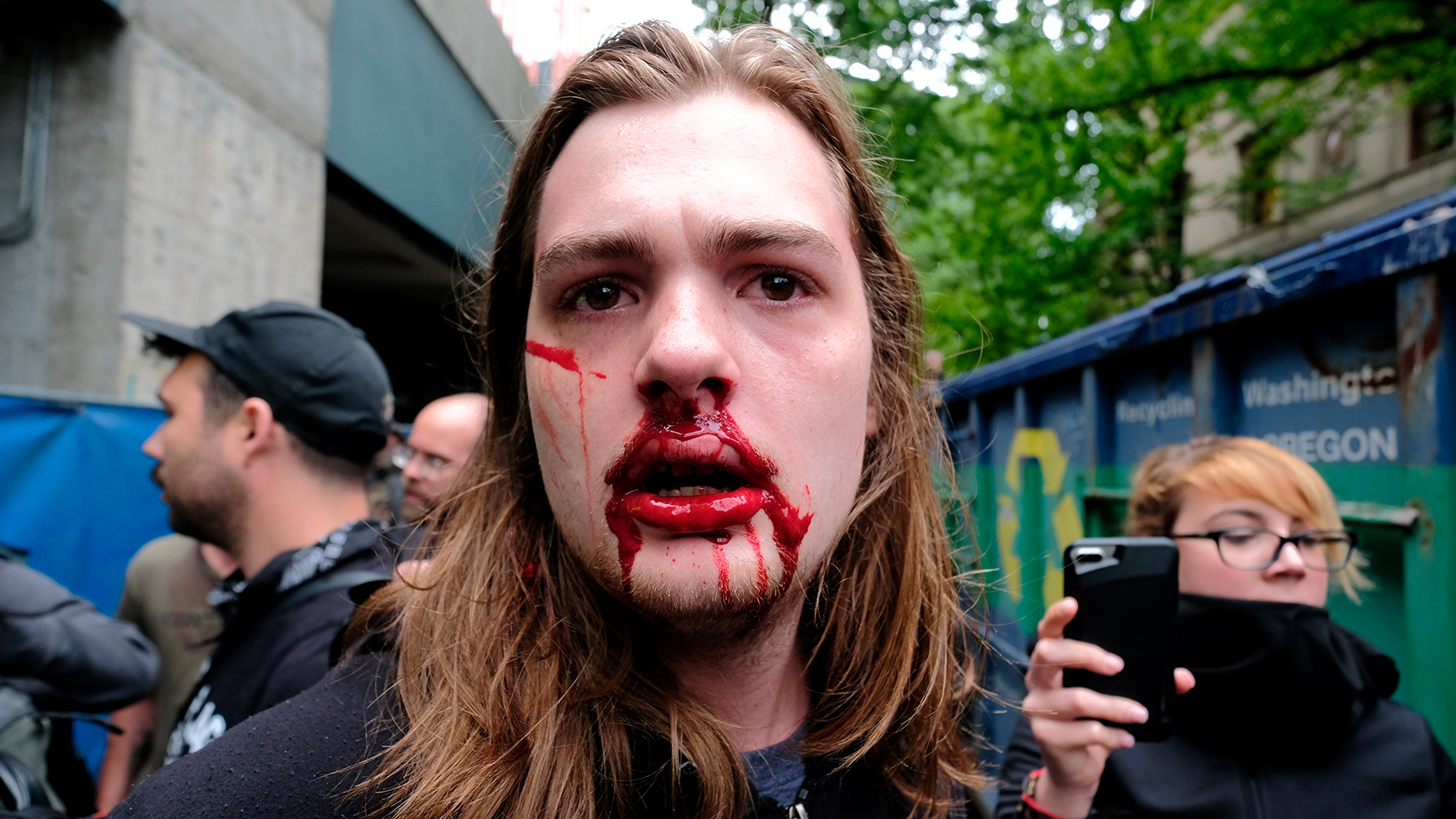 The alliance between Gibson and the Proud Boys first emerged at rallies early last year. Gavin McInnes, the leader of the Proud Boys, has mirrored much of Gibson’s rhetoric by continually citing the threat posed by groups like Antifa.

In one of the most recent episode of his CRTV show “Get Off My Lawn,” McInnes dedicated most of the program to taking “an in-depth look at EXACTLY who are enemies are,” linking Antifa — using an organizational chart — to “global elites,” “ruthless politicians,” and “corrupt SJW lawyers” in their apparent combined effort to “sabotage” American democracy.

McInnes celebrated Gibson’s rally and the violence, tweeting “Nowhere does antifa have a stronger hold than Portland yet 20 brave patriots barreled into 200 of them and sang anthems as they bled.”