Oath Keepers president Stewart Rhodes has thrown his weight behind a conspiracy theorist who’s been nicknamed “Screwy Louie” by other members of the militia movement and who's made allegations that are too wild even for the king of conspiracy theories, Alex Jones.

Rhodes, whose group claims to be made up of tens of thousands of current and former law enforcement and military personnel, posted a “call to action” on the Oath Keepers website on June 6, telling his members to go to Arizona to help with an “operation” begun last month by Michael Meyer, who commonly goes by the name Lewis Arthur. 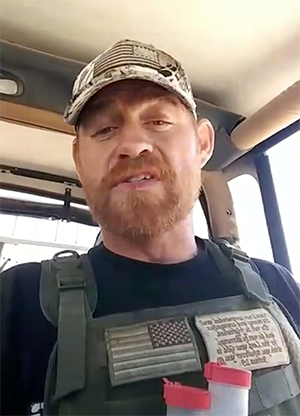 Meyer’s group, Veterans on Patrol (VOP), claimed to have uncovered evidence of child sex trafficking at an abandoned industrial site near Tucson, Arizona, and that law enforcement was not taking the situation seriously. His group has also claimed to have discovered what it said was a “child’s skull” in the desert miles away from the site.

Local and federal law enforcement agencies, including U.S. Immigration and Customs Enforcement, told BuzzFeed News they investigated the matter and found no evidence of crimes at what was likely a homeless encampment. The local sheriff’s department released a statement saying the skull found was that of an adult. The department also noted that the remains of “at least 40 migrants” have been found in that part of Arizona since the beginning of 2018.

None of that stopped Rhodes, one of the most prominent figures in the antigovernment militia movement, from embracing Meyer’s claims and sending armed militants to back him up. Rhodes himself could even be seen with Meyer on Tuesday, June 12, in a video posted to the Veterans on Patrol Facebook page.

In his call to action, Rhodes said he was looking for members with special operations and law enforcement experience to travel to Arizona to assist in Arthur’s efforts. He wrote that some Oath Keepers should be prepared to be armed “to provide security for the field teams and for the operation in general.”

He also asked for cash.

“If you cannot volunteer for this mission, please make a donation to support those who can,” Rhodes wrote. “We will need to cover considerable travel, food, and lodging expenses for our volunteers. Every little bit helps.”

It’s not uncommon for Rhodes to issue calls for Oath Keepers to mobilize to various locations in the U.S. The group has sent members to run “security” at various right-wing rallies, assist in disaster relief, and perform “incognito” poll monitoring on Election Day 2016. But the call to action in Arizona is by far the most bizarre.

The situation has echoes of the so-called “Pizzagate” conspiracy theory that swept across the radical right during the 2016 presidential campaign, in which many falsely claimed that former Secretary of State Hillary Clinton and other Democratic operatives were tied to a child sex trafficking ring operating out of the basement of a pizzeria in Washington, DC. In fact, the pizza shop had no basement and there was no pedophile ring there.

The speculation over Pizzagate became so hysterical that in December 2016, a North Carolina man named Edgar Welch, who’d binge-watched conspiratorial videos on YouTube, traveled to Washington to investigate the pizzeria himself. He showed up armed with a revolver and a high-powered rifle and fired multiple shots into a locked closet door inside the restaurant. No one was injured. Welch was arrested and later pleaded guilty to two charges — assault with a dangerous weapon and transporting firearms across state lines. Before his sentencing, Welch wrote a letter to his judge apologizing for his “foolish and reckless” behavior. He received four years in prison.

Since then, a number of high-profile Pizzagaters have distanced themselves from the conspiracy theories. Others, however, have embraced similar theories, known by the shorthand “QAnon” and “Pedogate.” The latter, similarly to Pizzagate, claims vast networks of the world’s powerful and elite — including business leaders, politicians and clergy — are trafficking children for sex and that President Donald Trump is working to dismantle the criminal enterprises.

What’s taken place in Arizona has exploded in online forums dedicated to QAnon and Pedogate in recent weeks as many believers in the conspiracies have become convinced that Meyer and Veterans on Patrol are truly disrupting sex trafficking rings despite the fact that they have located no victims or perpetrators. Meyer even gave a shout out to one of the conspiracy theories on a recent video on Facebook: "QAnon is in the house now."

Too foolish for even Alex Jones

Despite the embrace by some online, not everyone in the conspiracy community has gotten behind Meyer’s actions.

Alex Jones, whose website InfoWars routinely markets some of the wildest fictions to a massive audience, threw cold water on the notion of a child trafficking ring in Tucson last week. (Facing a potential lawsuit, Jones apologized last year for his website’s role in promoting Pizzagate.)

Jones said in a June 8 note posted to InfoWars that he believes what law enforcement on the ground has said about the matter:

This homeless camp found near Tucson, Ariz., has been investigated by the police. There’s nothing going on there. It’s a homeless camp with some evidence that may suggest illegal aliens with children have come through the area, which we already knew given that it’s near Tucson and other major migration points in the southwest.

But it’s not just local police saying that nothing’s there – President Trump’s own DHS, which has been massively busting up human trafficking rings all over the US, has investigated the homeless camp and said nothing is happening there.

But, of course, Jones couldn’t let the moment pass without offering his own theories.

Jones claimed the Arizona operation is designed to discredit people, like himself, who believe that "globalists and multi-national corporations" are involved in sex trafficking rings. He called the Arizona situation a "honeypot" and urged his audience to stay away from it:

No one should go to the homeless camp, and no one should investigate it independently. At the bare minimum, visiting the site constitutes criminal trespass. The story is a honeypot. All evidence shows it’s a setup.

While Jones didn’t mention Meyer by name, some of the militiamen that Meyer encountered during the 2014 antigovernment “Patriot” standoff in Bunkerville, Nevada, and the occupation of the a wildlife refuge later in Oregon have attacked Meyer directly since he’s gained some small notoriety.

Meyer made appearances at both standoffs, which were carried out by members of the Bundy ranching family, though his presence didn’t go over well. Some militia figures have, in the past, gone as far as to accuse him of being a snitch for federal law enforcement or at least a troublemaker looking for attention. Some have nicknamed him “Screwy Louie” because of it.

Those views have received some fresh air in recent days.

Pete Santilli, a far-right radio host who acted as a spokesman for the Bundy militants during the 2016 occupation of the Malheur National Wildlife Refuge, recently posted a series of tweets attacking Meyer (under the name Lewis Arthur) as a "gooftard provacateur" who should not be trusted.

Santilli also questioned why military veteran Craig Sawyer, another prominent "Pedogate" believer who goes by the nickname "Sawman" and was one of the early figures to amplify the Arizona situation, got involved with Meyer. (Sawyer has since distanced himself from the operation and deleted some early YouTube videos he’d posted about it.) 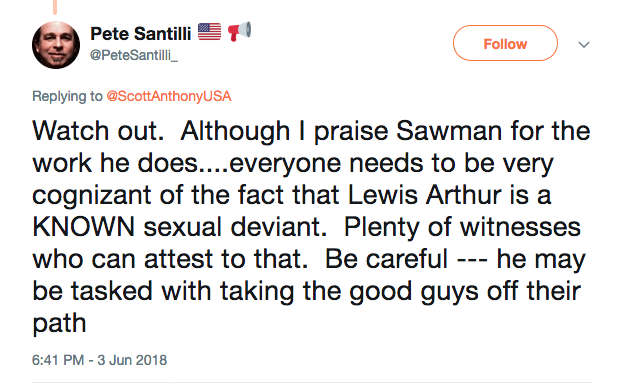 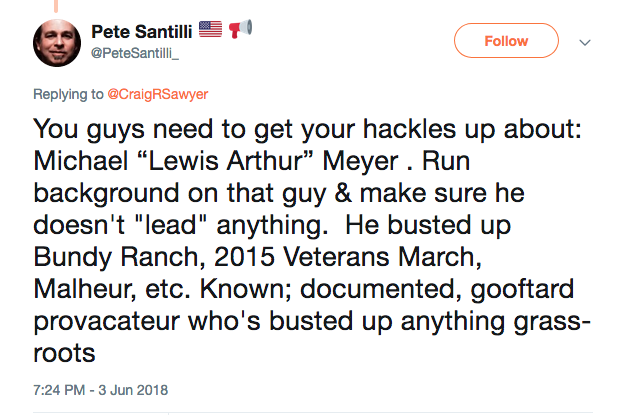 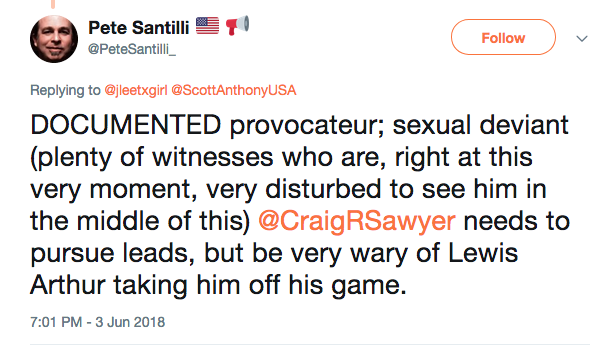 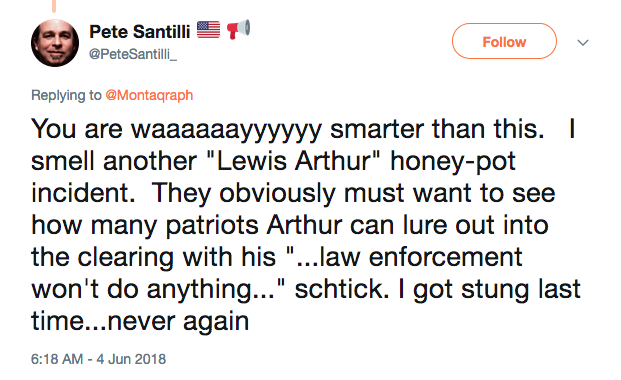 Greg Whalen, a Bundy supporter and Oath Keeper also criticized anyone joining forces with Meyer. On Facebook, Whalen accused Meyer, who often goes by the nickname “Louie Prepper,” of aligning himself with an “informant” in the criminal cases that emerged from the Bundy standoffs.

“Louis [sic] was kicked out of the militia camp at Bundy ranch in 2014 for marking the parking area with glow sticks when the supposed govt drone strike was to occur,” Whalen wrote on June 3, in one of several Facebook posts about the Arizona situation. “He then got thrown out of the militia camp at the oregon [sic] refuge. I see he has put up a video asking patriots for help....Is this the known informant associate you want to support??”

But it might be Jon Ritzheimer, currently serving prison time for his role in the Oregon wildlife refuge standoff, who was the most vicious and personal about the Veterans on Patrol leader.

In January 2016, Meyer traveled from Arizona to Oregon in the early days of the occupation and barged onto the grounds of the refuge. He got into a physical confrontation with a number of militants and later told The Oregonian that Ritzheimer had punched him in the back of the head.

On Saturday, June 9, one of Ritzheimer’s supporters, long-time militia activist Gary Hunt, posted to Facebook the text of what he said was an email Ritzheimer had sent from prison:

Lewis Arthur is a pathological liar and I believe he suffers from Schizophrenia. He devises these crazy ways to get people to surround him and bring supplies to him and acts as if he is out doing good. Veterans on Patrol is a prime example of this and I believe he will be the next cult leader to lead a mass suicide that will be comparable to the Jones Town Massacre. People should steer clear of this man. He is psychotic and deranged.

None of that has appeared to phase Rhodes. As of Tuesday, June 12, his “call to action” to assist in Arizona was still prominently featured on the Oath Keepers website and pinned to the top of the group’s Facebook page.