In the days leading up to the October 19 appearance, TenBrink, a 29-year-old felon from Houston, posted several times about the prospect of seeing the racist "alt-right" frontman in Gainesville.

The trip would prove a disaster for TenBrink, his travel companions Colton and William Fears, and Spencer himself. 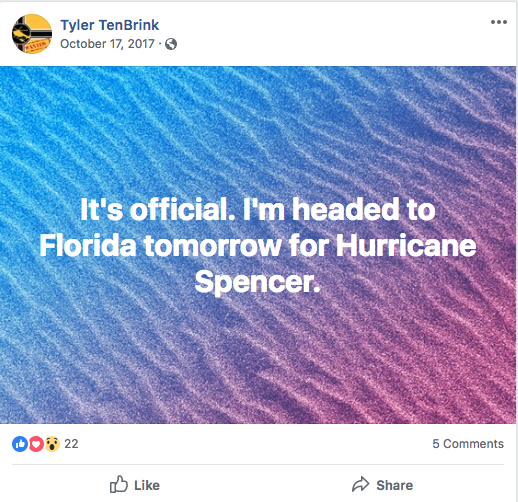 Tyler TenBrink of Houston posted on Facebook about how excited he was to see Richard Spencer in Gainesville, Florida on Oct. 19, 2017. After the speech, TenBrink and Colton Fears would be arrested and charged with attempted murder.

TenBrink and 29-year-old Colton Fears were arrested on attempted murder charges, William Fears was arrested but later released to face criminal charges in Texas and Spencer spent much of his appearance being booed and heckled at the university.

TenBrink posted frequently about the trip, including multiple Facebook live videos and chats before and during Spencer’s speech that layout out for the first time his activities and thoughts leading up to the speech and later his arrest.

The page also provides the first concrete evidence that TenBrink associated with the “III%” group known as the “Ghost Squad – Texas Division.”

“Three-percenters,” as they are known, generally rallied around antigovernment and anti-gun control issues, claiming unrestricted gun ownership was the key to saving the Republic. 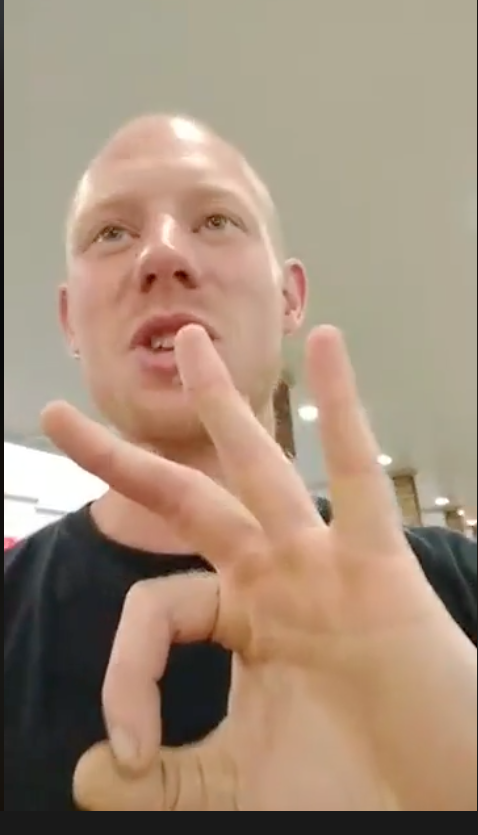 Tyler Tenbrink, a 29-year-old felon from Houston, was a member of a "III%" group. He broadcast on Facebook live his trip from Texas to Gainesville, Florida to see racist alt-right front man Richard Spencer speak at the University of Florida on Oct. 19, 2017. TenBrink and a friend, Colton Fears of Houston, would be charged with attempted murder stemming from a shooting after the speech.

Spencer’s speech on October 19, which drew protests inside and out of the venue, proved to be a disaster. Tenbrink and Colton Fears, a fellow 29-year-old from Houston, are charged with attempted murder.

TenBrink’s lawyers on Wednesday asked a judge to delay his trial, saying witness interviews won’t be done before a jury is seated. No ruling had been issued as of Friday. TenBrink and Colton Fears are currently scheduled for trial September 11.

In the days leading up to Spencer’s speech in Gainesville, Florida, TenBrink, the Fears brothers and a friend made plans to make the 855-mile drive along Interstate 10 on the Gulf Coast to hear the white nationalist speak.

Outside a Buc-ee’s truck stop in Baytown, Texas, TenBrink repeated the phrase “Hurricane Spencer” as the Fears brothers threw “heil” salutes to the camera. TenBrink then flashed three fingers to the camera — symbolizing the belief among III percenters in the disputed claim that only three percent of American colonists fought against the British in the American Revolution — before saying “See y’all in Gainesville.”

While driving through Louisiana at night on the way to Florida, TenBrink chatted with the Fears brothers and responded to questions on Facebook about where he was headed.

“If you got hate in your heart, let it out,” TenBrink said during a Facebook live. “White power.”

Once at Spencer’s speech, which also featured Eli Mosley (aka Elliot Klein, then the head of Identity Europa), and racist podcaster Michael “Enoch” Peinovich, TenBrink offered a running commentary. TenBrink would occasionally poke his head in front of the camera for the Facebook live audience and offer a thought or two. At other times, his voice carried over the amplified pronouncements from the stage.

As a song from new wave band Depeche Mode pulsed in the background, TenBrink turned the camera on himself and began raising and lowering his right eyebrow in time to the tune.

At one point, TenBrink broadcast on Facebook an interview he was doing with a reporter from the Washington Post. 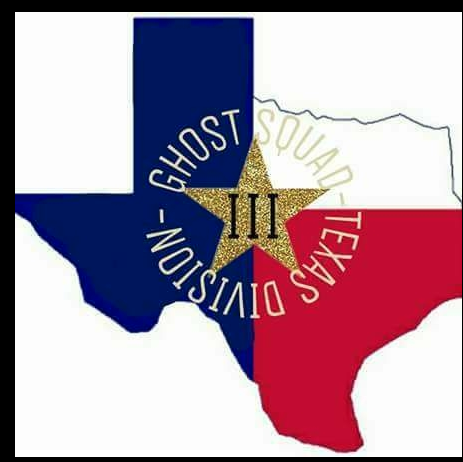 The logo for the "III%" group "Ghost Squad-Texas Division." Tyler TenBrink, a 29-year-old felon from Houston, associated with the group and posted the logo on his Facebook page. TenBrink and Colton Fears were arrested Oct.19 in Gainesville, Florida and charged with attempted murder after Richard Spencer's speech at the University of Florida.

TenBrink told the reporter he was drawn to Spencer’s speech because, after the violent and deadly “Unite the Right” rally in Charlottesville, Virginia, two months earlier, his family was threatened. And, TenBrink said, while he didn’t know Spencer’s full philosophy, he admired his willingness to say it in public.

“Obviously, the man’s got brass,” TenBrink said. “He’s got the balls to say what nobody will.”

“I simply stand on the 14 words: We must secure the existence of our people and a future for white children,” TenBrink said, referring to the mantra coined by the late white supremacist David Lane. “I call it like I see it. Homosexuals? If they want to be homosexuals, keep it to yourself. Nobody wants to hear that shit.”

During Spencer’s speech, loud protests and chants arose. At one point, Colton Fears appears on camera.

“Holy shit! My black friend is watching, but I’m a Nazi,” Fears said.

As protestors chant “Go home, Richard, go home” TenBrink ducked in front of the camera: “Are y’all seeing all this?” as he put his hands over his mouth.

In response to a Facebook post from Viktor Scaglians, “We need a brutal brownshirt element to clear out this room of degenerates,” TenBrink replied “Yes, Viktor, Yes.”

As the crowd chanted “You can’t run, you can’t hide, you support genocide.” TenBrink ducked in front of the camera and said “Mark my words. This is where it starts. This shit’s going to get hairy.”

As Spencer’s speech came to an end, TenBrink brought his Facebook live to a halt.

Later that evening, police would arrest TenBrink and the Fears brothers not far from campus. TenBrink would be charged with firing a gun at a protestor and being a felon in possession of a firearm.

Hours earlier, TenBrink mused that he “might stay in Florida.” A judge gave him little choice but to do just that. Since October, TenBrink has been in the Alachua County Jail held on $3 million bond.