Last year, the Values Voter Summit (VVS) was the site of a great celebration.

The Religious Right, including VVS organizer and anti-LGBT hate group Family Research Council (FRC), had bet that Donald Trump could win the 2016 presidential election. When Trump won the highest proportion of the white evangelical vote on record, he — giving thanks — became the first sitting president to address the gathering.

At this year’s VVS, the tone was markedly muted in comparison. Senate Majority Leader Mitch McConnell and Vice President Mike Pence made predictable midterm stump speeches. Bigoted presentations and conspiratorial orations, however, remained on the menu.

Here are 10 things that were said at the annual conference that unites anti-LGBT and anti-Muslim hate groups, activists and prominent politicians.

VVS’s “Student Mixer” gathered a few dozen students ranging from middle-school to college. Speakers on the panel encouraged youth “struggling” with “same-sex attraction or gender confusion” to open up to them, all the while condemning those impulses as “sins.” However, panelists professed support for Christians struggling with those sins. John Reid, the director of social media at FRC, clarified: “I say if you’re gay you’re more than welcome in our church, the doors are wide open. I don’t agree with that lifestyle, I don’t think it’s biblical but you are more than welcome to join.”

Chelsea Vicari, the evangelical program director of the Institute on Religion and Democracy, said sexual sins should be tackled by the church and not treated like a “different sin”:

None of us, whatever our issues with sin are, are the sum total of those sins. And no matter what someone is dealing with, if you are struggling with same-sex attraction or gender issues, that is not your identity.

When asked by an earnest young audience member what caused “gender dysphoria,” Reid mentioned his religious roommate, who regularly broke down in tears because of his “same-sex attraction,” a fact Reid “really appreciated about him.” Reid mentioned his roommate had been molested by his uncle as a child and added, “When you’re that young and that impressionable, that kind of trauma, even if you’re very young, has long-term effects.”

Patrina Mosley, the director of Life, Culture and Women’s Advocacy at the FRC, simply deemed being transgender as an effort to “erase God’s design.” While a couple of the young audience members were enthusiastic, most seemed confused by the lack of concrete help.

2. “Transgenderism is a vehicle for tyranny” 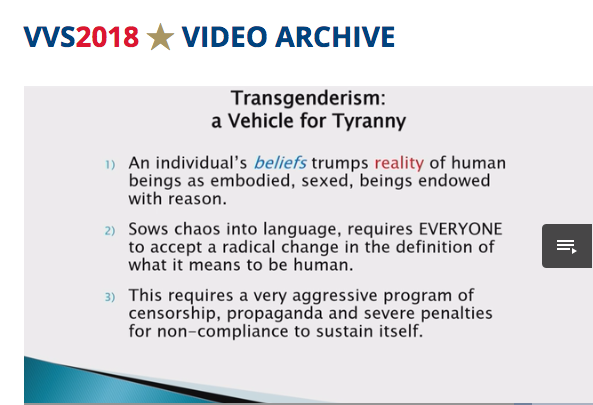 VVS is well-known for its anti-trans rhetoric, but seldom does it manage to get so many anti-trans heavy-hitters on one panel. Anti-trans junk scientist Paul McHugh listed several discredited scientific points meant to misrepresent trans populations and described sex-reassignment surgery as only able to enhance people’s well-being for 10 years, comparing it to how some people come to regret tattoos.

He was followed by the former president (now executive director) of the anti-LGBT American College of Pediatricians, Michelle Cretella, who claimed that America is “engaged in large-scale child abuse” before showing a slide that read: “Transgenderism: a Vehicle for Tyranny.”

Elizabeth Johnston, also known as “Activist Mommy,” then addressed the war on American children and called out sex education classes as

She concluded that “Conservatives have been playing much too nice with these degenerates.”

Brigitte Gabriel, the founder of the largest American anti-Muslim hate group, ACT For America, took to the stage with gusto and began yelling about the assault on Judeo-Christian values and the “indoctrination of Islamic propaganda” inside the classroom: “Our police are being killed by thugs and criminals while the mainstream media victimizes their killers,” she told the crowd while managing to mention the title of her new book, Rise, multiple times.

Gabriel sought to rile up the crowd with graphic descriptions of antifa thugs taking over America’s streets. “We are at war against the radical leftist element in our country that has declared war on us," Gabriel proclaimed, continuing:

America is the greatest nation on the planet. And those who are complaining about America, apologizing for America, want to bring America down to be on par with the rest of the world, we’ll tell them we’ll give them a one-way ticket to get the heck out of this country and back to whatever country of their choice and leave this country to us.

Maginnis expressed concern about Russia’s “25,000 spies that we think are amongst us. There’s no question the Russians and the Chinese are at war with us.”

She described Turkish president Recep Tayyip Erdoğan’s goal as bringing the Ottoman Empire back, as he is “a Muslim Brotherhood leader with, in my opinion, neo-Ottoman ambitions to be Sultan.” Lopez also had time to flog another CSP obsession: EMPs, or electromagnetic bursts of energy that can damage the power grid.

Vice President Mike Pence is a Christian Right favorite. His appearance at VVS on Saturday, September 22, delighted the crowd especially when he promised:

This administration will never abolish ICE. We will support those heroes as they uphold our laws. With our renewed commitment to law enforcement we’ve been securing our borders, enforcing our laws, taking dangerous gang criminals off of our streets at a record pace. And with the support of this Congress we’ve also kept a promise: we’ve already started to build that wall on our Southern border.

The audience erupted into cheers and a standing ovation, and soon broke out into a chant: “Build that wall!”

Pence promised the audience that “when it comes to that wall, we’re going to build it all.” He also told the audience, falsely, that the administration ended enforcement of the Johnson amendment, a section of the U.S. tax code that prohibits churches and non-profits from endorsing or opposing political candidates. Though repealing the Johnson amendment is a popular cause on the Christian Right, the Internal Revenue Service has rarely taken away a church’s tax exemption even under previous administrations.

6. “There is no widespread anti-gay bigotry”

Emilie Kao, the director of the Richard and Helen DeVos Center for Religion and Civil Society at the Heritage Foundation, dog-whistled anti-LBGT themes throughout her discussion on “religious freedom” Saturday.

The core of her argument was that gender identity and sexual orientation could not be considered like race, because race is an “immutable, objectively identifiable characteristic. A person’s race is irrelevant to the water fountain that they should drink from but a person’s biological sex is relevant to the bathroom, to the showers, to the sleeping facilities that they should use” and is “based on conduct.”

She used this argument to go on to the idea that:

It’s wrong to base moral judgments on somebody’s race but it’s normal and it’s oftentimes necessary to make moral judgments about people’s activities like their sexual behavior or on marriage and family.

7. Abortion is to blame for school shootings

The anti-LGBT hate group American Family Association (AFA) has a theory on school shootings, and it doesn’t involve guns.

School shootings were attributed to a “culture of death” fueled by abortion, violent media and violent video games. AFA’s suggested solution is to showcase the sixth commandment, “Thou shall not kill,” in schools. Sandy Rios of the AFA then went on to her usual anti-LGBT speech, calling same-sex marriage “a nationwide fist of defiance in God’s face.”

8. Kavanaugh did nothing wrong

From American Values president Gary Bauer to the National Rifle Association spokesperson Dana Loesch, most of the speakers at VVS were sure of one thing: Brett Kavanaugh is a flawless candidate for the Supreme Court, and allegations by Christine Blasey Ford that Kavanaugh sexually assaulted her in high school were “unproven and unprovable.”

In his speech, Bauer compared the allegations against Kavanaugh to those made against Justice Clarence Thomas by Anita Hill. Bauer defended Thomas’ actions as simply “boorish behavior.”

However, he did have some strong words for the protesters opposing Kavanaugh, calling them “antifa wannabes acting like little Nazis trying to shout down the hearings” because “the left is scared to death that at some point there might be five Justices on the Supreme Court that will actually make a ruling that could save a few babies.”

The exhibit section of VVS is rarely tame, and this year was no exception. One table was manned by the pro-conversion therapy group “Parents and Friends of Ex-Gays and Gays,” and another called for the separation of girls and boys in the name of modesty on college campuses.

Another exhibitor was the John Birch Society (JBS), the conspiratorial extremist group, which also had a table in the red-and-blue exhibit room loaded with materials opposing the Republican push for a constitutional convention and literature warning about antifa and the deep state.

10. Bannon is out! Mitch McConnell is back! Gorka is still here!

At last year’s VVS, the former executive chairman of the far-right Breitbart News, Steve Bannon, made a speech, signaling the willingness of the Christian far-right to align with the racist “alt-right”-leaning personalities that helped bring Trump to office. Bannon then vowed to take the Senate majority leader out of office, railing, much to the audience’s glee: “Up on Capitol Hill, it’s like the Ides of March. They’re just looking to find out who is going to be Brutus to your Julius Caesar. We’ve cut your oxygen off, Mitch.”

Instead, Bannon is now out of a job, and a gleeful Mitch McConnell took the stage at VVS to a standing ovation.

But Sebastian Gorka, the former White House deputy assistant caught wearing the medal of a far-right Hungarian nationalist group, appeared at the gathering for the second year in a row and spent his entire speech praising Donald Trump’s election: “I don’t care which God you pray to — I do, really — but whoever it is, [election] night was proof that He exists!”