Conflict within the neo-Confederate white nationalist League of the South (LOS) has forced the group to find a new location for its annual convention after the owners of a Wetumpka, Alabama, building said it will no longer rent its property to the LOS.

For the last seven years the LOS held its annual meetings at a building owned by the Southern Cultural Center Inc., an Alabama nonprofit.

“We’re not renting to them. They are not going to be meeting there anymore,” Mike Whorton, a member of the cultural center board of directors, said in an interview with Hatewatch Wednesday.

Whorton, who owns a real estate company in Wetumpka, recently resigned as the LOS Alabama state chairman. He said Wednesday that the William Lowndes Yancey chapter of the LOS, based in Wetumpka, Alabama, “has been dissolved.”

Whorton was a frequent speaker at LOS conventions in recent years and gave a fiery speech on behalf of the LOS on Alabama’s capitol steps in 2015.

“We put on our gospel armor … and when you fight, the Lord comes with a sword and he expects us to be men and women and get out here and fight” in the face of “cultural genocide,” he said.

Whorton said Wednesday the Southern Cultural Center board of directors intends to issue a new mission statement in January. 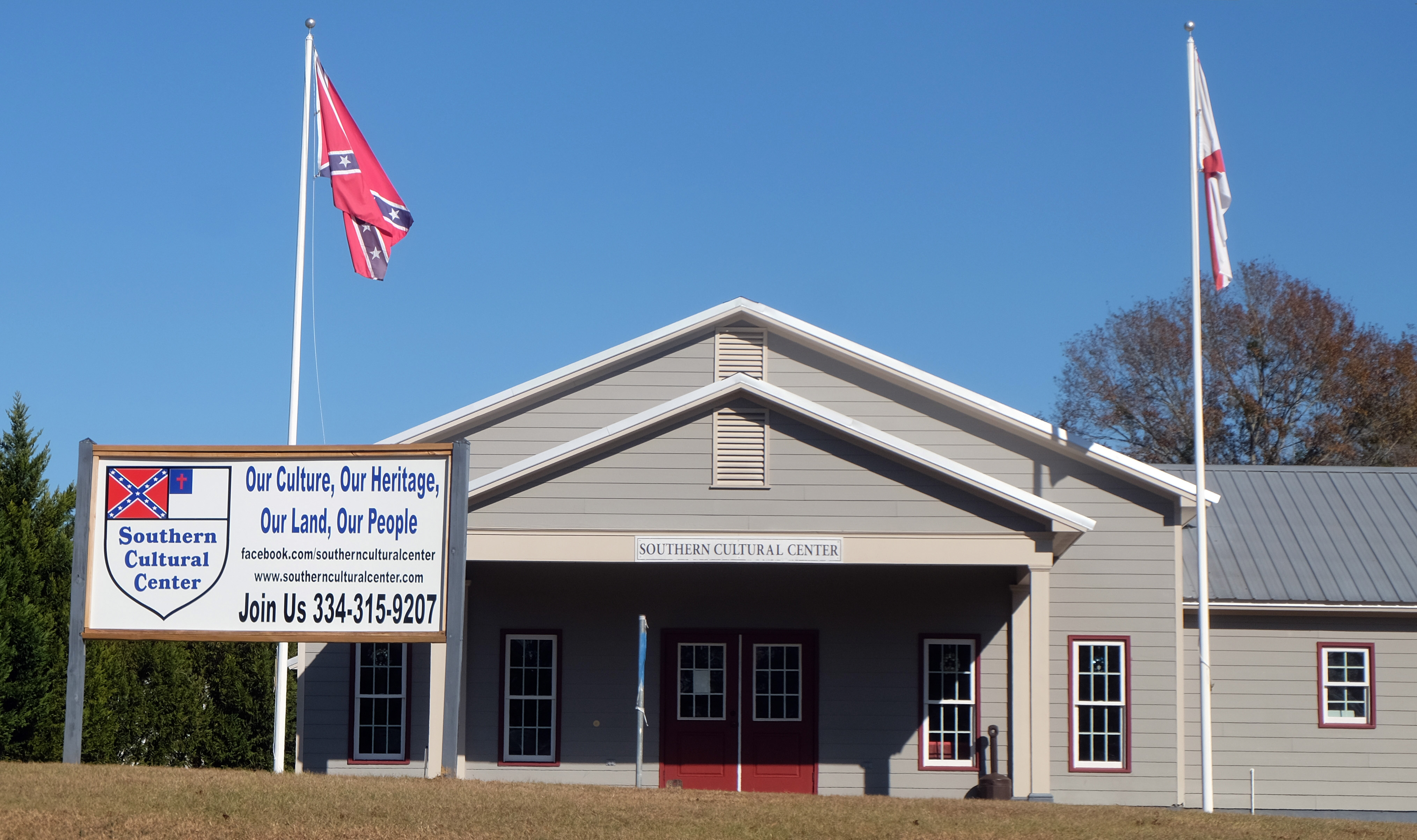 The former LOS headquarters a day after president Michael Hill announced that the League had lost its home.

According to a recent argument on Facebook, Whorton has become uncomfortable with LOS’s militant direction.

Michael Hill, LOS national president, said in a Facebook post on Monday that Rayn Owens is the new Alabama chapter president. Hill urged members to support Owens as “he begins the job of putting our State chapter back on sound footing.”

Owens favors militant street activism. He has appeared in the League’s uniform of khaki pants and a black polo shirt at most of the LOS street demonstrations throughout 2017, including the deadly “Unite the Right” rally in August 2017. Owens was one of a handful of LOS members who showed up in Auburn, Alabama, for Richard Spencer’s speech in 2017. At that event he wore a T-shirt from the now-defunct Traditionalist Worker Party (TWP).

The timing of the split also suggests that Whorton and the nonprofit Southern Cultural Center are no longer associating with the LOS in order to protect real estate assets from any future legal action against the LOS. The LOS along with Hill and other members have been named defendants in a civil suit filed in Charlottesville, Virginia, in connection with their actions at the “Unite the Right” rally.

The Southern Cultural Center property is valued at $323,000 by the Elmore County Assessor’s office.

Referred to as “the League building” by LOS members, the Southern Cultural Center has served as the site of the league’s annual conference since 2013. Speakers at recent national conferences include ex-Klansman David Duke and neo-Nazi Matthew Heimbach of the Traditionalist Worker Party (TWP).

During past conferences, armed members of the League’s paramilitary wing , formerly called the Indomitables, now known as the Southern Defense Force, could be seen patrolling the property.

In his Facebook post Hill stated that he was not given a reason why the Southern Cultural Center will no longer rent the building to the LOS.

“For the last 7 or 8 years we have held the annual (League of the South) national conference at this building and have shown it off with great pride,” Hill stated in the Facebook post.

An announcement about “the League building”

Over the past decade or so, many League members have made contributions of money, time, labor, skill, and material first to build and then to maintain what commonly was referred to as “the League building” in Wetumpka, Alabama. For the last 7 or 8 years we have held the annual LS national conference at this building and have shown it off with great pride.

But this has come to an end. Mike Whorton, our former Alabama State Chairman who recently resigned that position as well as his LS membership, informed me that we would no longer be welcome to rent the building for our national conference. I was not given a specific reason for this denial.

I know many of you who have supported the building over the years will be very disappointed to hear of this sad development. We are currently looking for a replacement venue for our 2019 national conference. We intend to continue holding it, if possible, in Alabama because of our central location.

On a related note, I encourage you all to support our new Alabama State Chairman, Rayn Owens, as he begins the job of putting our State chapter back on a sound footing. We should have an announcement about a new venue for our conference shortly after the beginning of the new year. Stay tuned …