It took a week of contentious back-and-forth with Auburn University and a last-minute federal judge ruling in his favor, but white nationalist Richard Spencer finally had his chance to speak.

But when the time came on Tuesday, most of the excitement and substance was outside the auditorium, where hundreds of students had confronted far fewer white nationalist extremists gathered to show their support for the 39-year-old head of the National Policy Institute, a white nationalist think tank.

Inside the auditorium, Spencer repeatedly attacked college football, extolled the virtue of “white identity” and, most importantly, congratulated himself for enlisting Klan lawyer Sam Dixon to challenge Auburn’s decision earlier in the week to cancel Spencer’s speech. 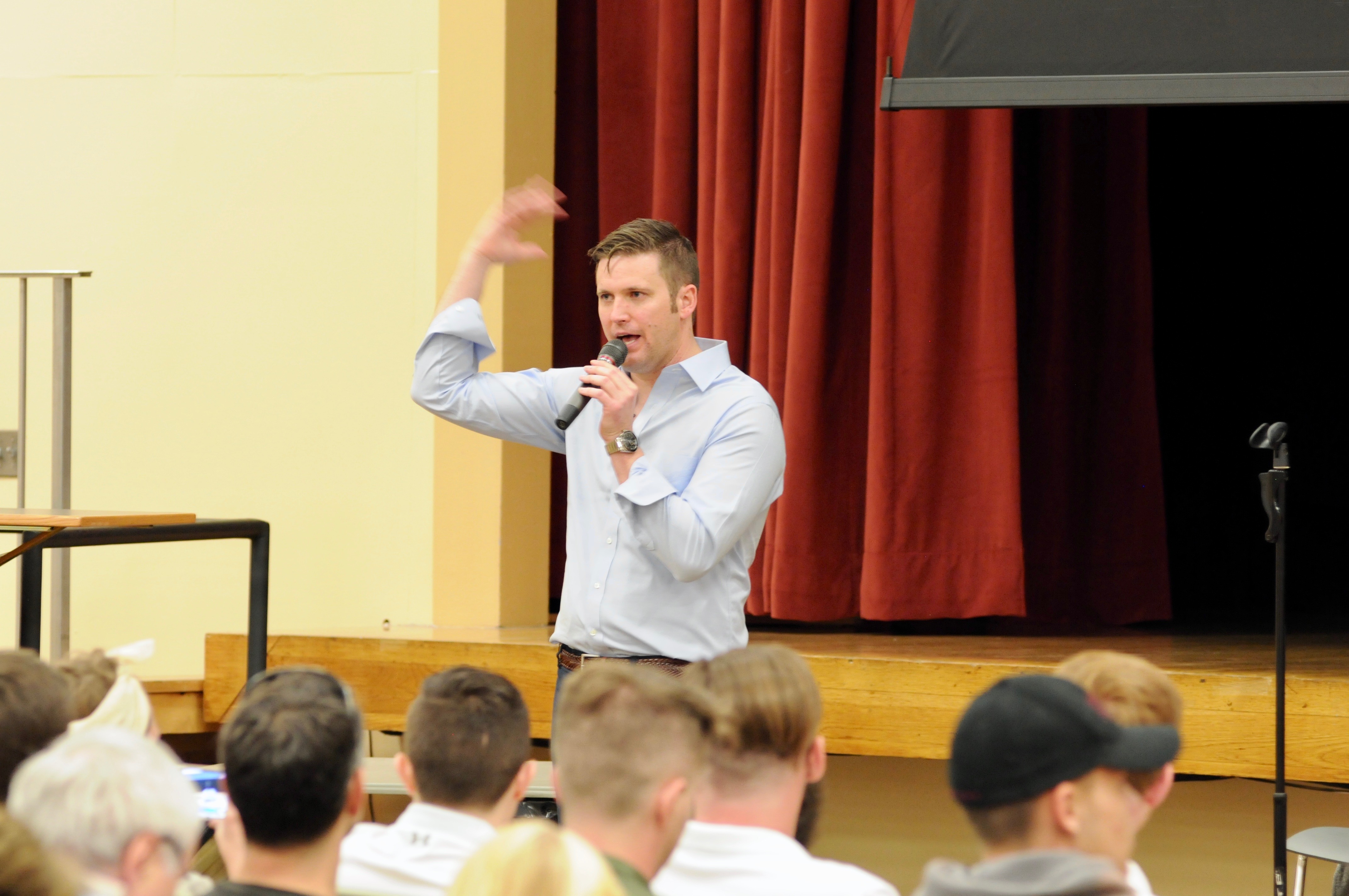 “We won an amazing victory this afternoon. We won a victory that’s going to have echoes around the world. And I don’t mean echoes the way you mean echoes,” Spencer said as his speech began in Foy Hall, specifically addressing about 100 racists in attendance directly by referring to the racist "alt-right" practice of putting triple parentheses around Jewish names.

Spencer’s address, part of an ongoing tour of college campuses announced earlier this year, was perhaps the most contested he has yet made. While appearances from other alt-right representatives, including former Breitbart News tech editor Milo Yiannopoulos, have turned violent, Spencer took the unexpected step of challenging Auburn in federal court for cancelling the event.

“We strongly deplore his views, which run counter to those of this institution. While his event isn’t affiliated with the university, Auburn supports the constitutional right to free speech,” university officials said in a statement a week before then event. Then, just days later, the university cancelled the event altogether “based on legitimate concerns and credible evidence that it will jeopardize the safety of students, faculty, staff and visitors.”

The back-and-forth drew national interest at a time when college campuses are quickly becoming proving grounds for young white nationalists eager to challenge what they have increasingly and viciously lampooned as centers for “leftist indoctrination.” And the question at hand was simple: As deplorable as his views were, could a university silence them?

As Geoffrey R. Stone, a professor of law at the University of Chicago (Spencer’s alma mater), noted in an op-ed published Tuesday in The New York Times, Spencer’s fight came 40 years to the month after the Illinois Supreme Court, the United States Court of Appeals and the United States Supreme Court ruled that the town of Skokie, Illinois, a northern suburb of Chicago, could not bar the neo-Nazi National Socialist Party of America from marching. “The Skokie controversy was a landmark victory for the First Amendment,” Stone wrote. “It proved that the rule of law must and can prevail.” He added, “Auburn had it right the first time.”

It wasn’t the first time a university cancelled a venue for an alt-right luminary. The Washington Post noted in its coverage of Spencer that the University of California Berkeley cancelled Yiannopoulos’s appearance after protesters caused $100,000 in damage to campus. At least six were injured there.

The unfortunate reality to Spencer’s court victory, though, was that while a federal judge ruled he had the right to speak, it didn’t ensure the students would listen.

In fact, by the time Spencer wrapped up his 45-minute address and turned to questions, the audience had started to thin and would continue to do so for the rest of his time on stage. Students who did line up at one of two microphones challenged Spencer and demanded facts to support the claims of his rambling thesis that white identity was superior.

At one point, Spencer conceded, “Even if whites were inferior in every way, I would still fight for my people, and I would say everything I just said. But thank goodness that’s not true. We’re f------ awesome.” 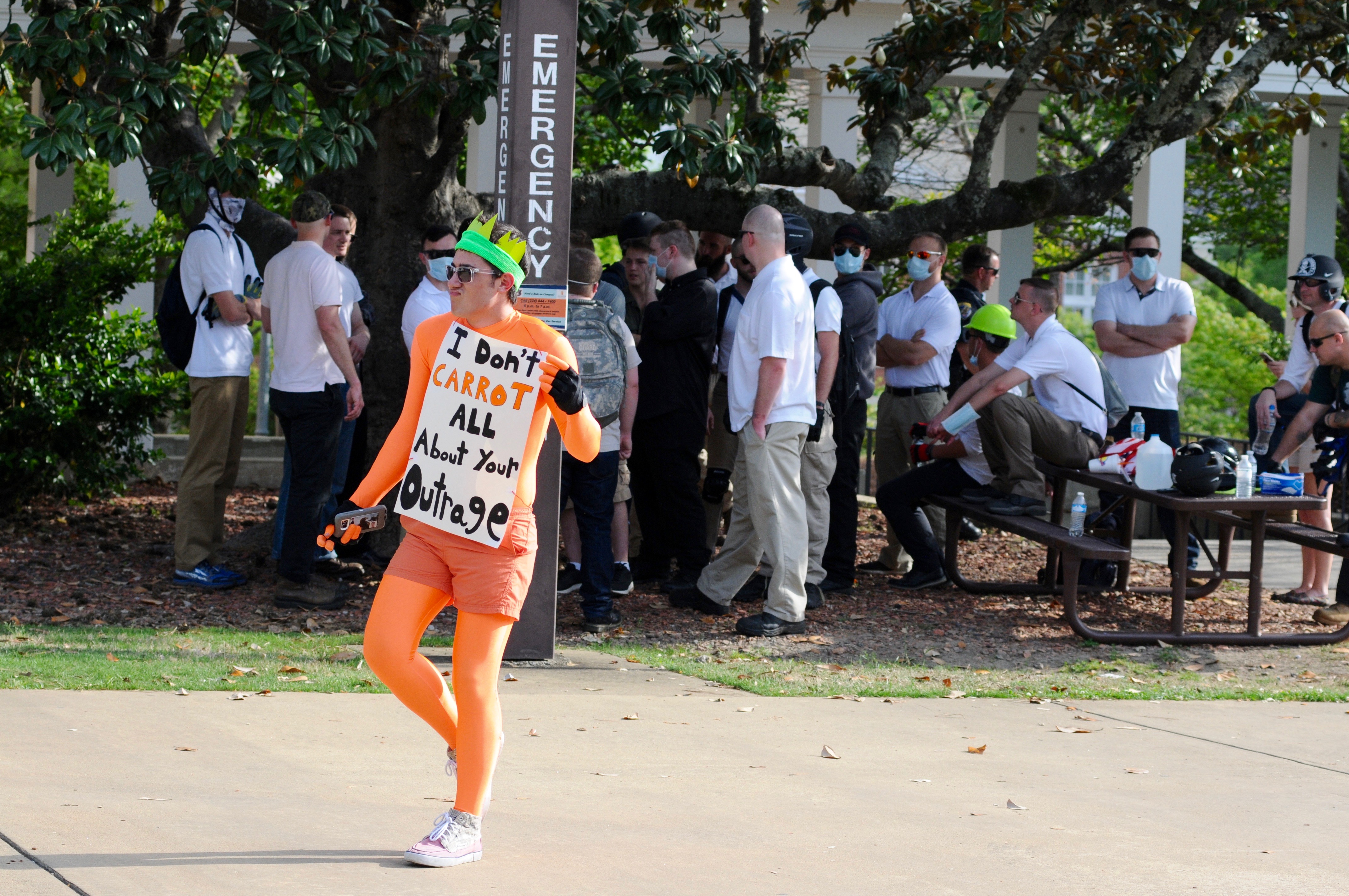 A student in an orange body suit dances in front of supporters of white nationalist Richard Spencer.

Outside, however, protesters gathered by the hundreds to voice their opposition, some dressed in costumes and dancing to taunt the racists and neo-Nazis who had come to express support for Spencer. One protester, wearing an orange body suit, danced in front of gathering of extremists while “Why Can’t We Be Friends” by War played over a speaker.

The extremists who came to stand in support with Spencer included Matthew Heimbach of the Traditionalist Workers Party, Brad Griffin, publisher of the white nationalist blog Occidental Dissent, as well as a sizable number of Hammerskins, antigovernment extremists and neo-Confederates.

Capt. Lorenza Dorsey told the Associated Press that three people were arrested for disorderly conduct. It was unclear if they were protesters or extremists there to see Spencer, though Michael Hill, head of the neo-Confederate League of the South, posted a plea on Facebook Wednesday to raise money for a member he said was arrested.

“One of our compatriots bloodied a big, ugly AntiFa in Auburn last night, was arrested, and fined $500. We are raising funds to offset his fine. At this (12 noon, 19 April), we have three pledges of $25 each,” Hill wrote. “We must always be ready to help our brother and sisters in this fight!”