Behind the shield of anonymity, members of a neo-Confederate hate group appeared to have emerged without consequences for their participation in a deadly Virginia rally. But that shield has vanished.

Last week Hatewatch exposed several leaders of that group, Identity Dixie (ID), who were instrumental in promoting and coordinating the Aug. 12, 2017, “Unite the Right” rally in Charlottesville, Virginia.

Hatewatch contacted Joseph Platania, Commonwealth’s Attorney for the City of Charlottesville, regarding Identity Dixie’s involvement in “Unite the Right” and the disclosure of names of people who lead the group. Platania declined to answer specific questions and explained, “The Charlottesville Commonwealth Attorney’s Office does not comment on the existence or status of criminal investigations.”

Kessler belonged to the Proud Boys, a hate group comprising self-described “Western chauvinists,” when he secured the permit to hold the “Unite the Right” rally. He later joined Identity Dixie but left the group in 2018.

The organization and attorneys that represent plaintiffs in the Sines case also continue their investigation. “It’s no surprise that many defendants in our suit are connected to this group – and it serves as one more horrifying example of how these violent extremists co-opted social media to recruit and plan for the bloodshed in Charlottesville,” Amy Spitalnick said. She serves as the executive director for Integrity First for America, the organization that is funding the suit for the 11 plaintiffs. Spitalnick declined to provide additional information.

However, the Sines lawsuit describes defendants it lists as “the individuals and organizations that conspired to plan, promote, and carry out the violent events in Charlottesville.”

Hatewatch acquired and published the real names of Identity Dixie members and information that suggests they, too, planned participation in “Unite the Right.”

The trio, along with “Ryan McMahon” and “Dark Enlightenment,” heavily promoted the deadly “Unite the Right” rally through Identity Dixie’s “Rebel Yell” podcast. Identity Dixie leaders worked with other “alt-right” groups to coordinate attendance at the rally, arranging transportation to and from the rally and lodging before and after the event. They also organized a “security detail” composed of their members for event organizer Kessler.

Kessler appeared on “Rebel Yell” twice in the runup to “Unite the Right.”

On a May 19, 2017, episode titled “Jason Kessler, Right-Wing Activism,” Lynn aka “Musonius Rufus” encouraged listeners to donate to Identity Dixie so the funds could go towards Kessler’s legal defense in a disorderly conduct charge. The charge, which was later dismissed, stemmed from Kessler’s involvement in the May 14, 2017, torchlit rally in Charlottesville’s Market Street Park (then known as Lee Park).

A post titled “Charlottesville: You Will Not Replace Us” under Lucas Gordon’s “Silas Reynolds” byline on the ID website indicates members participated in the May 14, 2017, rally along with “Identity Evropa, Vanguard America, League of the South [and] The Traditionalist Worker’s Party.” The blog promotes the white genocide conspiracy theory, claiming that “Removing statues is simply a foreshadowing of what the (((Marxist))) memory hole wishes to vanquish; the European people. Sensing the direction of these anti-White actions, our people have motivated to preempt any further progress our enemies seek.” The author shared photographs of individuals he suspected of being Jewish or LGBTQ.

Kessler returned to “Rebel Yell” on July 6, 2017, to decry the “hyperbolic rhetoric by the media” regarding the event after journalists noted the visual similarities between the torchlit rally and cross-lightings at Ku Klux Klan gatherings.

Kessler’s second “Rebel Yell” appearance was intended to build hype for the planned follow-up to the torchlit rally. Initially known as “Charlottesville 2.0,” the rally is now known as “Unite the Right.”

There will be a “Unite the Right” rally this August 12th in Charlottesville, Virginia. Richard Spencer is returning to defend Lee’s statue in defiance of the Media’s smear campaign against Identity Europa’s rally for the statue. Other speakers will include Mike Enoch, Matthew Heimbach, Augustus Invictus, and Dr. Michael Hill of the League of the South. Bring your Southern flags, gentlemen.

Former Identity Evropa leader Elliot Kline, aka “Eli Mosley,” named Identity Dixie as a “Group/Sponsor” in a secret planning document prepared for white nationalist groups attending “Unite the Right.” That document is listed as an exhibit in the Sines v. Kessler lawsuit.

Identity Dixie appears to have had a channel in the “Unite the Right” planning server “Charlottesville 2.0.” Discord chats leaked by media collective Unicorn Riot show that Erica Alduino, posting under the username “Erika,” – who served as liaison between various alt-right groups – posted in “Charlottesville 2.0 #announcements”:

@everyone If you are a member of Identity Evropa, ATL-Right, Traditionalist Workers Party, Vanguard America, League Of The South, Identity Dixie, or any other organization I failed to name, please DM me. I set up private, organization specific channels so members in each group can coordinate and socialize with each other. 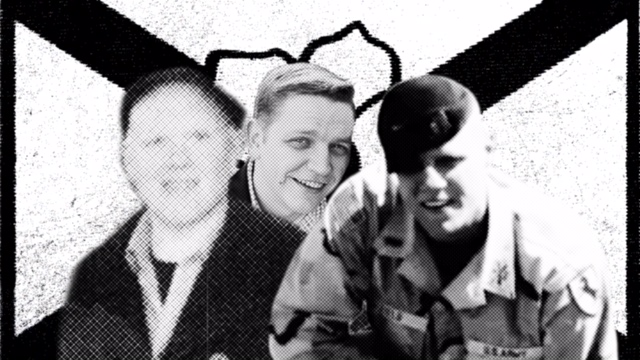 Member “Spencer Reeshly” shared an image of a wooden shield adorned with Identity Dixie’s logo and the slogan “You Will Not Replace Us” built for “Unite the Right.”

Member “Spencer Reeshly” shared an image of a wooden shield adorned with Identity Dixie’s logo and the slogan “You Will Not Replace Us” built for “Unite the Right.”

Following “Unite the Right,” Lynn, under his “Musonius Rufus” pseudonym, took to ID’s secret Facebook group to thank a member who “led the brethren of Identity Dixie in this battle,” and acted as Kessler’s personal security during the event.

Lynn, aka "Musonius Rufus," discouraged members from fleeing the group post-“Unite the Right.”

Responding to Lynn’s remarks “Hamish Bone” demurred on his role and stated, “as for leading ID, Silas and Mike led ID into Cville. Silas opened his home to all of us when we had nowhere to stay.”

Other ID members were lauded for their role in the violence that day. R.G. Miller, Spencer Borum, aka “Spencer Randolph,” and Brandon Richey, who were members in both the League of the South and ID, were filmed pummeling counterprotesters.

“Mitch Hoob” replied in Lynn’s comment that “the greatest f----- thing was walking towards that massive crowd of psychopaths only to see RG/Spencer Randolph/Brandon Richey come flying through to clear em out allowing us to make it through with ease.”