The acting director of the U.S. Citizenship and Immigration Services (USCIS) became the latest Trump administration official to speak at an event organized by the anti-immigrant hate group Center for Immigration Studies.

“The president’s doing a lot of good things right now in the immigration space,” Cuccinelli said. 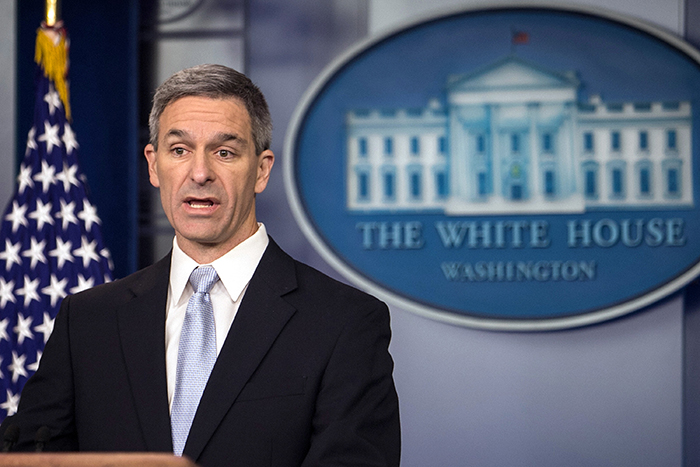 Acting Director of U.S. Citizenship and Immigration Services Ken Cuccinelli speaks about immigration policy at the White House on Aug. 12, 2019.

Cuccinelli lauded the administration’s efforts to end the "catch and release" policy, which allows migrants to stay in the United States while their immigration cases are processed.

The executive director of the Center for Immigration Studies has long opposed "catch and release" as well as the Flores Settlement Agreement. The settlement agreement limits the amount of time U.S. immigration officials can hold migrant children in certain detention centers and ensures proper living conditions for them while in the government’s custody. The Trump administration has taken steps to dismantle the agreement so the government can detain migrant families indefinitely.

In a 2018 letter to the Department of Homeland Security, the Southern Poverty Law Center criticized efforts to end the Flores settlement. “This attack on the well-settled rights guaranteed to children through the 1997 Flores Settlement Agreement is an outgrowth of this white supremacist agenda and does direct harm to migrant children and families based on a constructed and imagined fear,” wrote SPLC staff attorney Gracie Willis.

Cuccinelli also addressed the administration’s proposed expansion of the “public charge” rule. The expanded rule would deny green cards and some visas to immigrants who use – or whom immigration officials deem likely to use – federal assistance programs such as food stamps or Medicaid.

Cuccinelli defended the policy last month in an NPR interview by rephrasing the famed Emma Lazarus poem on the Statue of Liberty. “Give me your tired and your poor who can stand on their own two feet and who will not become a public charge,” he said. The policy is set to go into effect Oct. 15.

The center is the go-to think tank for the anti-immigrant movement. The group churns out dubious research and publications aimed at vilifying immigrants. It was founded in 1985 by the late John Tanton, a population and eugenics advocate who started the modern-day anti-immigrant movement. Tanton died in July, but his legacy endures through a network of anti-immigrant groups he helped create. These groups helped lay the groundwork for immigration policies coming out of the Trump administration.

Several such hate group alumni are now employed at the U.S. Citizenship and Immigration Services, an agency within the Department of Homeland Security that handles immigration matters, including applications for citizenship, visas and asylum. Julie Kirchner, an ombudsman at the agency, previously was the executive director of the anti-immigrant hate group Federation for American Immigration Reform (FAIR), a sister organization of the Center for Immigration Studies. Robert Law, FAIR’s former government relations director, and Elizabeth Jacobs, a former FAIR lobbyist, have also joined USCIS as senior advisers.

Cuccinelli’s predecessor, Lee Francis Cissna, who stepped down as USCIS director in June, spoke at one of the center’s “Immigration Newsmaker” events in August 2018. As director, Cissna changed the agency’s mission statement by removing the sentence about the United States being a “ nation of immigrants” and replaced it with one that stressed “protecting Americans, securing the homeland, and honoring our values.” Other administration speakers have included James McHenry, director of the Executive Office for Immigration Review, and Thomas Homan, a former acting director of U.S. Immigration and Customs Enforcement (ICE).

As the center’s event unfolded Thursday at the National Press Club, FAIR has been having its annual media and networking event, “Hold Their Feet to the Fire,” at the Phoenix Park Hotel in Washington. Scheduled for Wednesday and Thursday, the immigration-focused event was to bring together more than 70 radio talk-show hosts, anti-immigrant figures, lawmakers and law enforcement officials.

Cuccinelli appeared Wednesday at the FAIR event and did interviews with radio hosts broadcasting from the hotel.

Ronald Vitiello, then-acting director of ICE, attended last year’s FAIR event. During a radio broadcast there, Vitiello minimized the effects of the administration’s family separation policy, saying that “only 2,500 people were affected by that situation.”

The same day that FAIR’s conference kicked off this week, a reported crowd of about 200 sheriffs participated in a “Badges and Angels” event on Capitol Hill to discuss the impact of immigration on their communities. Multiple sheriffs attended the first day of Hold Their Feet to the Fire, including Bristol County, Massachusetts, Sheriff Tom Hodgson, who sits on FAIR’s board of advisers.

Photo by The Asahi Shimbun via Getty Images