Maria Espinoza, the national director of the anti-immigrant hate group the Remembrance Project, is running again for Congress in her home district in Texas.

Espinoza lost the Republican primary in the state’s 7th Congressional District in 2016, placing last in a three-way race with 17.8% of the vote. This time, the race dynamics have changed after Democrat Lizzie Pannill Fletcher beat GOP incumbent John Culberson in 2018. Espinoza is one of five Republicans so far to have filed with the Federal Election Commission to run in the party’s March 3 primary. The filing deadline is Dec. 9.

Espinoza did not respond to Hatewatch’s attempts to reach her by email, social media and phone to ask about her platform in the campaign for the suburban Houston district. 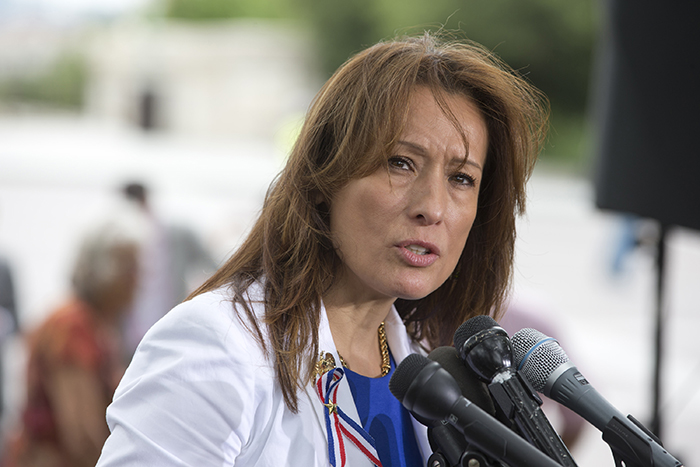 The Remembrance Project's Maria Espinoza speaks out against a Senate immigration reform bill in 2013 in Washington. (AP Images/Jacquelyn Martin)

The Remembrance Project leader’s association with right-wing groups goes back at least a decade. She is a former president of the Houston chapter of the Eagle Forum, a conservative group founded by Phyllis Schlafly that has trafficked in assorted conspiracy theories. The group, for example, asserted that advocates of same-sex marriage were out to destroy Christianity. Schlafly proved instrumental in dooming the passage of the Equal Rights Amendment in the 1970s.

Espinoza founded the Remembrance Project in 2009 to advocate for families of victims of violence by undocumented immigrants, and the group has grown increasingly anti-immigrant since then. Its tagline on Facebook reads: “Educating and raising awareness about the epidemic of killing of Americans by illegal aliens – individuals who should not have been in the U.S. in the first place.”

In 2012, Espinoza warned that “[no] one is immune to the illegal who drives wildly drunk, or the wanna-be gang-banger” in a piece published by The Social Contract, a racist journal founded by John Tanton, the architect of the modern anti-immigrant movement who died in July.

And in a Facebook post five years ago, Espinoza wrote, "Child molestation and rape are very numerous in this illegal alien demographic!"

In 2017, families formerly involved in the Remembrance Project told Politico that the group “used, abused and exploited” them for political and financial gain. Espinoza responded that the criticism was “some sour grapes” from people wanting to start their own groups.

During her earlier congressional run, Espinoza advocated for policies such as stopping Muslim immigration to the United States, building a wall on the southern border and opposing amnesty for undocumented immigrants. She won the endorsements of anti-Muslim extremist Pamela Geller and Tom Tancredo, a former congressman from Colorado with ties to white nationalists.

Following President Donald Trump’s election, Espinoza gained a foothold in mainstream immigration policy circles. At the onset of the Trump administration, Espinoza and the Remembrance Project influenced the creation of a new U.S. Immigration and Customs Enforcement office called VOICE, or Victims of Immigration Crime Engagement.

The VOICE concept came from Espinoza, who says she wrote letters to all 50 governors and four GOP presidential candidates in 2016. Then-candidate Trump reportedly was the only one who responded. The Remembrance Project facilitated introductions between “angel families” (whose loved ones were killed by undocumented immigrants) and Trump. The president created this new office in March 2017 through an executive order, and Espinoza attended the signing ceremony.

The Remembrance Project announced her 2020 campaign this week, a little more than two months after Espinoza said she would run.