A judge has ordered the remote compound of the anti-LGBTQ group Aggressive Christianity Missionary Training Corps sold for $2.8 million.

Schmierer, in a court filing, characterized the group as a cult. One national news organization called Aggressive Christianity a “military-style Christian sect,” while another one noted the group’s “anti-Semitic leanings.” 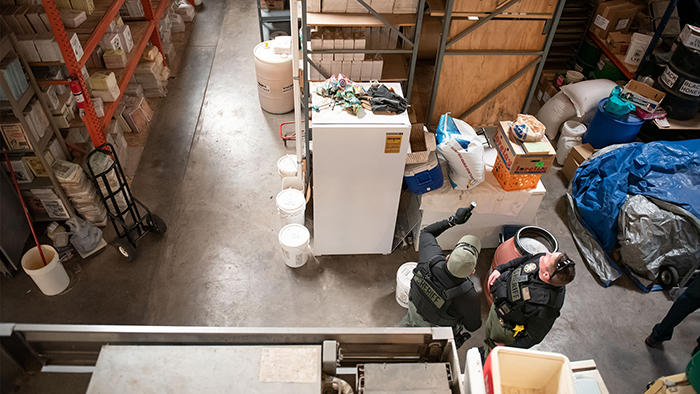 Officers inspect one of the main buildings on the Aggressive Christianity Missionary Training Corps compound in Fence Lake, New Mexico, in March. Boxes of clothes belonging to the now-imprisoned leaders of the group, Jim and Deborah “Lila” Green, propaganda pamphlets, appliances and other goods were found littered around the building. (Photo by Brandon N. Sanchez)

Schmierer first sued the group, leaders Jim and Deborah “Lila” Green, and multiple members in 1989. The long legal battle involved appeals and efforts to track down the group – which changed names several times – and members who also hid their identities and have dispersed around the country.

“They’d pull stunts like changing their names, changing their organization names,” Schmierer told Hatewatch in a phone interview. “I just over the years stayed on them.”

The court appointed a special master to make a recommendation in the case. The special master, William A. Sanchez, recommended the property sale earlier in October.

Three companies – GS Financial Holdings, AKT Trust and SMJ Trust – purchased the property. The special master will write a separate report spelling out how the sale proceeds will be distributed. A California court in 1989 awarded Schmierer a $1 million default judgment, which her attorney estimates has now grown to more than $4.7 million with interest.

Aggressive Christianity Missionary Training Corps, which the Southern Poverty Law Center listed as a hate group from 2011 through 2017, has been on shaky ground in recent years, with its leaders, the Greens, in prison.

Jim Green pleaded no contest to child abuse and other charges in 2018 and received a 10-year prison sentence. His wife, Deborah “Lila” Green, was sentenced to 72 years in prison after being convicted on charges of child rape, kidnapping and child abuse.

“They always railed against people and things outside of their group,” said Rick Ross, a deprogrammer and executive director of the Cult Education Institute in Trenton, New Jersey. “They’d rant about the LGBT community.”

The Greens ran the group much like a military organization, giving themselves titles of “General,” wearing military garb and demanding obedience and respect from followers. Those who questioned Deborah Green’s orders reportedly faced “trials.”

“They would say this is not a family church. This is an army of God,” Schmierer said.

Jim Green and his followers also took to the internet with anti-LGBTQ posts. Green said that teaching children that LGBTQ people are normal leads to “sexual perversion” as youths grow up and potentially to pedophilia.

“Under (nugatory) Obama’s administration, children have been victims of the homosexual agenda – teaching little ones the way of sexual perversions,” Green wrote in one updated post. “They will pay for this! While denying godliness and promoting (perverted) worldliness, sick and sinister things are put into children’s minds by these sickos.”

Green also railed against Catholics and other Christians he saw as less than fully committed to religion. Many members were racists who identified with the antisemitic Christian Identity philosophy, said Ross, who has worked with former Aggressive Christianity followers.

Julie Ann Gudino, a one-time cult member who left in 2004, testified at a 2012 trial that the control exerted by the Greens extended to personal identities. The couple told followers their names were related to their former lifestyles, a culture that should be forsaken.

Gudino became Elizabeth Edwards in the group, where she met Schmierer. “Those were the first names we were given, but then that was changed later on,” Gudino testified about the names she and her ex-husband took.

Schmierer escaped the group in the late 1980s and filed a lawsuit claiming false imprisonment. Over the years, she kept up her legal fight – and her judgment kept accumulating interest. 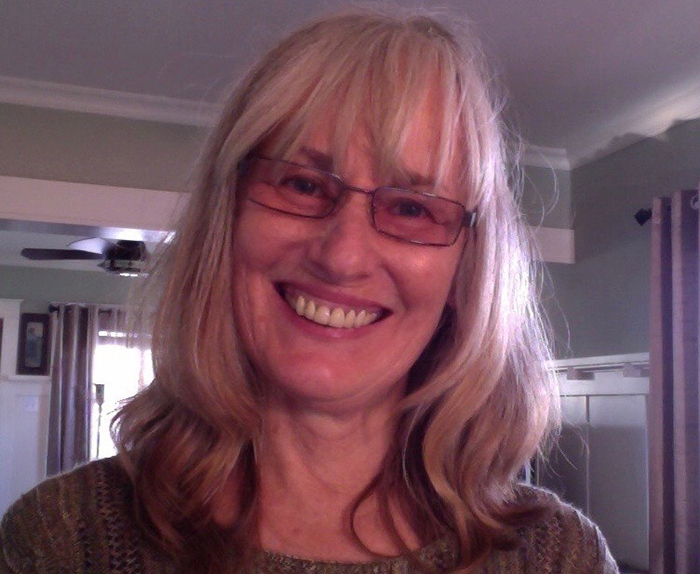 Maura Schmierer has been involved in a decades-long lawsuit against Aggressive Christianity Missionary Training Corps, the anti-LGBTQ group she escaped from in the late 1980s. (Photo courtesy Brendan O’Reilly)

Lawyers used land purchases and public records to trace the Greens to Fence Lake, New Mexico, a rural area of around 40 people about 145 miles west of Albuquerque.

There the Greens had set up a compound for followers. The property includes a trailer and old buses, according to descriptions in the litigation.

Behind the main house, where the leaders of the anti-LGBTQ group lived, are pallets of shrink-wrapped solar panels, near where the body of 13-year-old Enoch Miller turned up. The death of the boy, who authorities said suffered from a probable infectious disease, had never been reported. No one was charged in the death, although Jim Green pleaded no contest to failing to report it to authorities.

Schmierer’s attorney, Brendan O’Reilly, toured the grounds in February and described them to Hatewatch, calling the experience “surreal.”

Commercial-grade kitchens with the ovens missing, stacks of clothes belonging to the now-imprisoned cult leaders and an assortment of oddities, such as printing presses, litter the inside of the buildings, he said.

Elsewhere, O’Reilly found what appeared to be an educational building with the words “Camp Encouragement” scrawled in crayon on the door, a large flat-screen television and a whiteboard set up in front of chairs.

“That building by itself was pretty creepy and still had a lot of cult memorabilia in it,” O’Reilly told Hatewatch in a phone interview.

O’Reilly and Schmierer said they will keep searching for property belonging to Aggressive Christianity.