A leaked audiotape attributed to white nationalist Richard Spencer depicts him as a suit-and-tie bigot who uses coded language to charm the masses but who deploys slur-laden, racist language with his followers.

The audio, purportedly from Spencer, was leaked by far-right provocateur Milo Yiannopoulos and posted Sunday to his Telegram channel. It was ostensibly taken following the deadly 2017 “Unite the Right” rally in Charlottesville, Virginia, possibly by someone within Spencer’s circle, according to the British newspaper The Guardian. On the tape, Yiannopoulos says, the voice belongs to a screaming Spencer, who uses numerous slurs against racial and religious minorities.

Yiannopoulos told Vox that he’s verified with three people that Spencer’s voice is on the recording and with one other person who was in the room at the time of the rant. Other white nationalists, including YouTuber Nick Fuentes, asserted on Telegram they were aware of the audio’s existence before and had listened to it a few times. 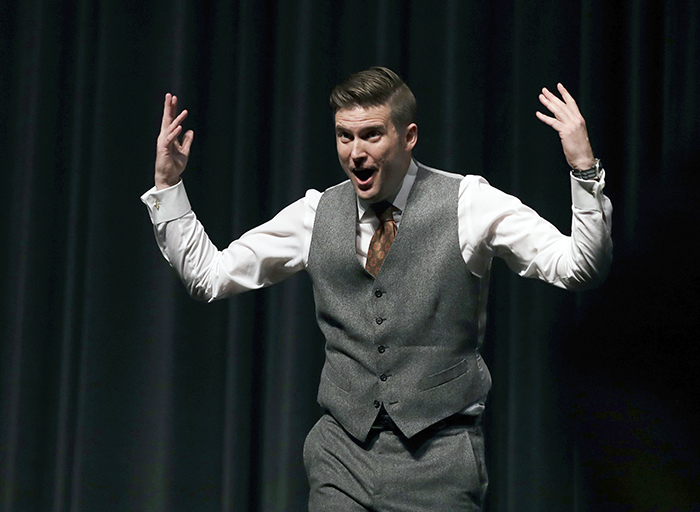 White nationalist Richard Spencer tries to rouse students during an October 2017 speech at the University of Florida in Gainesville. (AP Images/Chris O'Meara)

Hatewatch tried to reach Spencer via email and through social media, but he didn’t return requests for comment. However, he told The Guardian he didn’t recall making the remarks but he would respond at a later time. The paper reported Spencer tweeted a link to a right-wing video with the phrase “never apologize.”

The leaked audio apparently originated in the wake of the Charlottesville rally that resulted in the death of counterprotester Heather Heyer. The audio represents one of the biggest cracks in Spencer’s carefully crafted facade as a well-dressed and articulate proponent of white-power talking points. Throughout the tape, Spencer purportedly rants about “k----,” an offensive term white supremacists use to refer to people of Jewish descent, and “octoroons,” a dated racial slur describing someone who is one-eighth black.

“We’re going to f------ ritualistically humiliate them,” he screeches at one point, referring to the residents of Charlottesville. Cheers and encouragement follow. “I am coming back here every f------ weekend if I have to.”

On Wednesday, Integrity First for America – the organization behind the Charlottesville lawsuit against the organizers of Unite the Right – announced that the plaintiffs’ legal team was issuing subpoenas to Yiannopoulos “for all documents related to the litigation,” including any additional audio of Spencer.

The “alt-right” – a term Spencer and others use to portray their form of white supremacy as something novel – captured the public’s attention in late 2016 and 2017. Throughout the movement’s rise to prominence, it has relied on using coded language to portray the alt-right as nothing more than an eclectic band of dissident conservatives.

For years, the white nationalist leader has called for overt ethnic cleansing or “ethnic redistribution” but has tried to pass off his noxious beliefs as intellectual curiosities.

Spencer has told journalists that his vision of a white ethnostate ought to be compared to Zionism. “In the mid 19th century, many Jews in Central Europe had an idea of an ethno-state, an idea of Zionism, and they were considered ridiculous and insane,” Spencer told Vice in 2013.

He used similar language in 2017 during his brief national college tour, telling students that one state he often turned to for guidance was Israel. That same year, Spencer even told Israel’s Channel 2 News that he saw himself as a “white Zionist.”

“You could say that I am a white Zionist in the sense that I care about my people, I want us to have a secure homeland for us and ourselves,” the newspaper Haaretz, quoting from his TV appearance, said. “Just like you want a secure homeland in Israel.”

Yet, in the leaked audio from Charlottesville, Spencer purportedly screams to a room of cheering supporters: “Little f------ k----. They get ruled by people like me.”

As in his comparisons to Zionism, Spencer – and others ­– have used the moniker of identitarianism to distance themselves from their movement’s violent, racist past. The term alludes to racial and ethno-national identity politics but also implies a forceful rejection of multiculturalism and ethnopluralism.

At times, the goals of these rebranding exercises have been made explicit. In 2018, former Spencer ally Patrick Casey appeared on the “Today” show to argue that his white nationalist group Identity Evropa – which has since rebranded as the American Identity Movement ­– was “trying to move beyond the paradigm that includes buzzwords like ‘racist.’ ”

Spencer and others have used the language of identity politics as a means of presenting his vision of a “white homeland” or a “white ethnostate” as something befitting mainstream politics. Although his call for “peaceful ethnic cleansing” has made the rounds in numerous profiles, alongside an array of glitzy photos, Spencer has consistently refused to discuss the specifics of his vision.

More often than not, he frames the possibility of such a community as a “dream.” Instead, the concept could be used, as Mother Jones reported in a 2016 profile of him, “to shift the bounds of accepted political discourse.” As for the idea of these changes being brought about in a “peaceful” manner, Spencer has seemingly managed to coax some reporters into publishing his denunciations of other white nationalists’ violent behavior, as he did in a recent Los Angeles Magazine article on Gavin McInnes.

But the leaked audio shows such appeals are little more than an explicit cover for the violent subordination of minorities.

This sense of pride in the domination and subjugation of others has cropped up before. In 2017, Spencer told British journalist Gary Younge during an interview for “Angry, White, and American” – a documentary for British network Channel 4 ­­– that “Africans have benefited from their experience with white supremacy.” When pressed by Younge on whether Spencer is “proud of slavery,” he responds, “I embrace all of it.” (Spencer was notably less candid on a 2017 episode of “Reveal" about his family’s wealth from cotton farms, which the podcast noted is in a “region that … has a history of slavery and racism.”)

Still, all these instances are a far cry from the screams in the leaked audio that his “ancestors enslaved those pieces of f------ shit.”

Spencer’s persona has, for years, acted as a veneer for his white supremacist beliefs. He may draw upon Theodor Herzl, the famous Zionist leader who advocated for a Jewish homeland, to bolster his vision of a white ethnostate. He even told Politico in 2017, that the future of his racist think tank, the National Policy Institute, lay in a marquee headquarters in downtown Washington.

Ultimately, however, Spencer has shown himself to be fluent in the slurs used by his white supremacist forefathers. He's masked his true self, it seems, out of a realization that breaking his ideas into the mainstream requires a closet full of suits and a penchant for German philosopher Martin Heidegger.

The carefully crafted facade that Spencer prefers to show journalists, however, has occasionally collapsed. At a dinner the night before the National Policy Institute's 2016 conference, Spencer said, “We have a culture. We have the right to do this,” referring to his organization’s difficulties in finding an appropriate venue in Washington for his evening gathering of white supremacists.

At that same event, Spencer stood in front of a room of boisterous white nationalists not long after several of them posed for selfies throwing up “Sieg Heil” salutes with noted Hitler-appreciator Tila Tequila.

“Go to hell!” he shouted, referring to a group of protesters outside.

Minutes later, after a brief discussion of logistics for the rest of that evening, Spencer told the room that while he had considered telling everyone “‘We will party like it’s 1933!’ or something … that joke is outmoded. We’re going to party like it’s 2016!”

By mentioning 1933, a reference to Hitler’s rise to power, in tandem with Trump’s election win, Spencer sought to draw a connection between the two. The next day, video producers from The Atlantic caught Spencer giving a speech before a mass of jubilant white supremacists – many of whom threw up “Sieg Heils” in response.

Still, Spencer has benefited from the massive wave of media coverage that came as a result of his willingness to speak to journalists in a manner that was, at times, forthright and, at others, coded.

The innocuously named National Policy Institute brought in almost $316,000 in revenue in 2016, according to publicly available tax forms published on ProPublica’s website, a leap from a reported $85,000 to $145,000 in earlier years.

These days, the institute is a shadow of its former self. Its website hasn’t been updated in more than a year, and the group has apparently stopped doing public events.

But that doesn’t mean Spencer lacks a platform. In July, he appeared on CNN’s “The Lead With Jake Tapper” to lambaste Trump for giving “nothing outside racist tweets” ­– the president’s policies, in other words, weren’t racist enough.

Now, we may have a better understanding of just what is racist enough for Spencer.