Miller flagged “The Camp of the Saints,” a book popular among white nationalists and neo-Nazis, to the conservative website on Sept. 6, 2015, when he was an aide to then-Sen. Jeff Sessions of Alabama.

“The Camp of the Saints” by Jean Raspail first came out in France in 1973, and the novel gradually gained popularity among extremists for its fictionalization of the “great replacement” or “white genocide” myth. The Social Contract Press, a white nationalist publishing firm, began distributing the book in the United States in 1994. But it wasn’t until Donald Trump became president in January 2017 that it achieved any association with the White House.

Here’s a breakdown of the novel’s racist content and the role Miller played in promoting it:

A Dystopian View of Immigration

A wave of nonwhite immigration into France triggers a dystopian reality in “The Camp of the Saints” in much the same way that privatization of public resources figures into the 1987 Paul Verhoeven film, “RoboCop,” or government control does in George Orwell’s novel “1984.”

In “The Camp of the Saints,” masses of Indian people storm France as refugees, led by a nonwhite antagonist referred to as the “turd eater.” He eats human feces “in time of famine” and physically plays with it using his hands, according to one passage. He is described as a “monster” and “giant” with “stinking hands.” White nationalists, such as the writers of the neo-Nazi website Daily Stormer, commonly associate people from South Asia and the Arab world with defecation. They use dehumanizing terms such as “street-shitter” and “shit-skinned” as pejoratives. 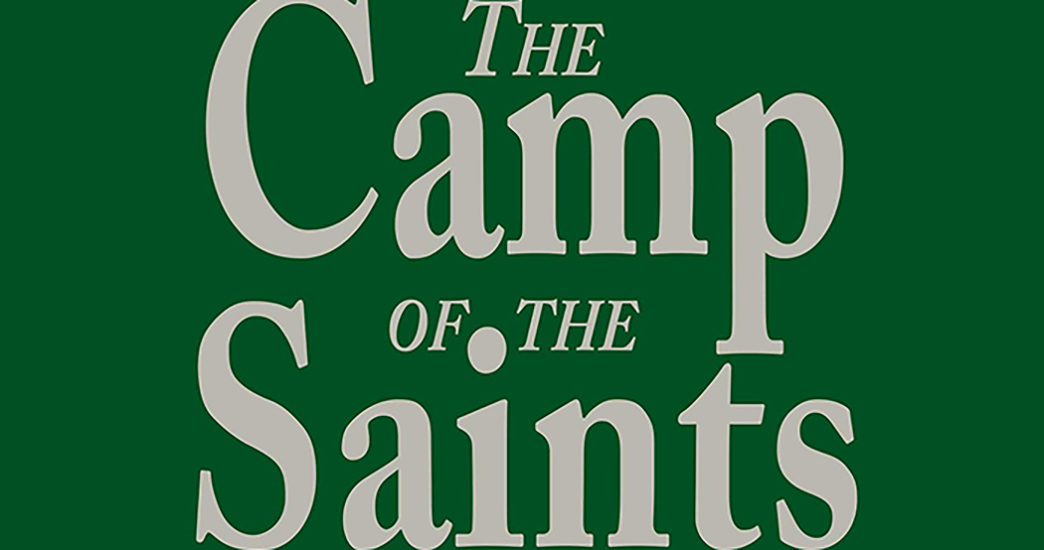 The French novel "The Camp of the Saints" was first published more than 40 years ago but took off with the American far right in the 1990s.

The refugees fail to assimilate and pick up French cultural traditions and ultimately overtake the white population. Raspail describes the perceived stakes of racial integration in a manner that can be read as a justification for far-right violence, as a 2018 analysis in The New Republic detailed:

“But don’t you ever ask yourself what something like this would mean? The mixture of races, and cultures, and lifestyles?” an elderly professor demands of a refugee-loving hippie early on in the book. “The different levels of ability, different standards of education. Why, it would mean the end of France as we know it, the end of the French as a nation.” The professor then shoots the hippie.

In their propaganda, white nationalists describe people from the developing world as being inherently threatening. Likewise, the refugees in “The Camp of the Saints” are depicted as savages. As refugees subsume the white population toward the end of the book, immigrants rape a young white woman named Lydie to death:

“The fact is that Lydie’s death was anything but heroic. She died in Nice, in a whorehouse for Hindus, disgusted with everything in general and herself in particular. At the time, each refugee quarter had its stock of white women, all free for the taking. And perfectly legal. (One of the new regime’s first laws, in fact. In order to ‘demythify’ the white woman, as they put it.) By Easter Monday Lydie had been raped – on her famous white sheets, we might add – and proceeded, not unwillingly, in those first chaotic days, to tag after a troop of energetic Hindus, who had taken her over in a kind of joint ownership, since she was very pretty, and her skin was very white.”

While working for Sessions, Miller highlighted “The Camp of the Saints” to Breitbart in an email Sept. 6, 2015, writing to Katie McHugh, an editor at the website at the time:

“… you see the Pope saying west must, in effect, get rid of borders. Someone should point out the parallels to Camp of the Saints.”

McHugh leaked emails from Miller to Hatewatch. She was fired from Breitbart in 2017 after posting anti-Muslim tweets. She has since renounced the far right.

Miller’s email on the novel precedes public references to the book that White House officials such as Trump’s former chief strategist Steve Bannon later made.

Critics hounded Bannon about “The Camp of the Saints” in 2017 after reporters scrutinized his interest in the novel in the wake of the Trump administration’s travel ban to some Muslim-majority countries. The first public reference Bannon made about the book appears to be in October 2015 when he conducted a radio interview with Sessions while still at Breitbart. 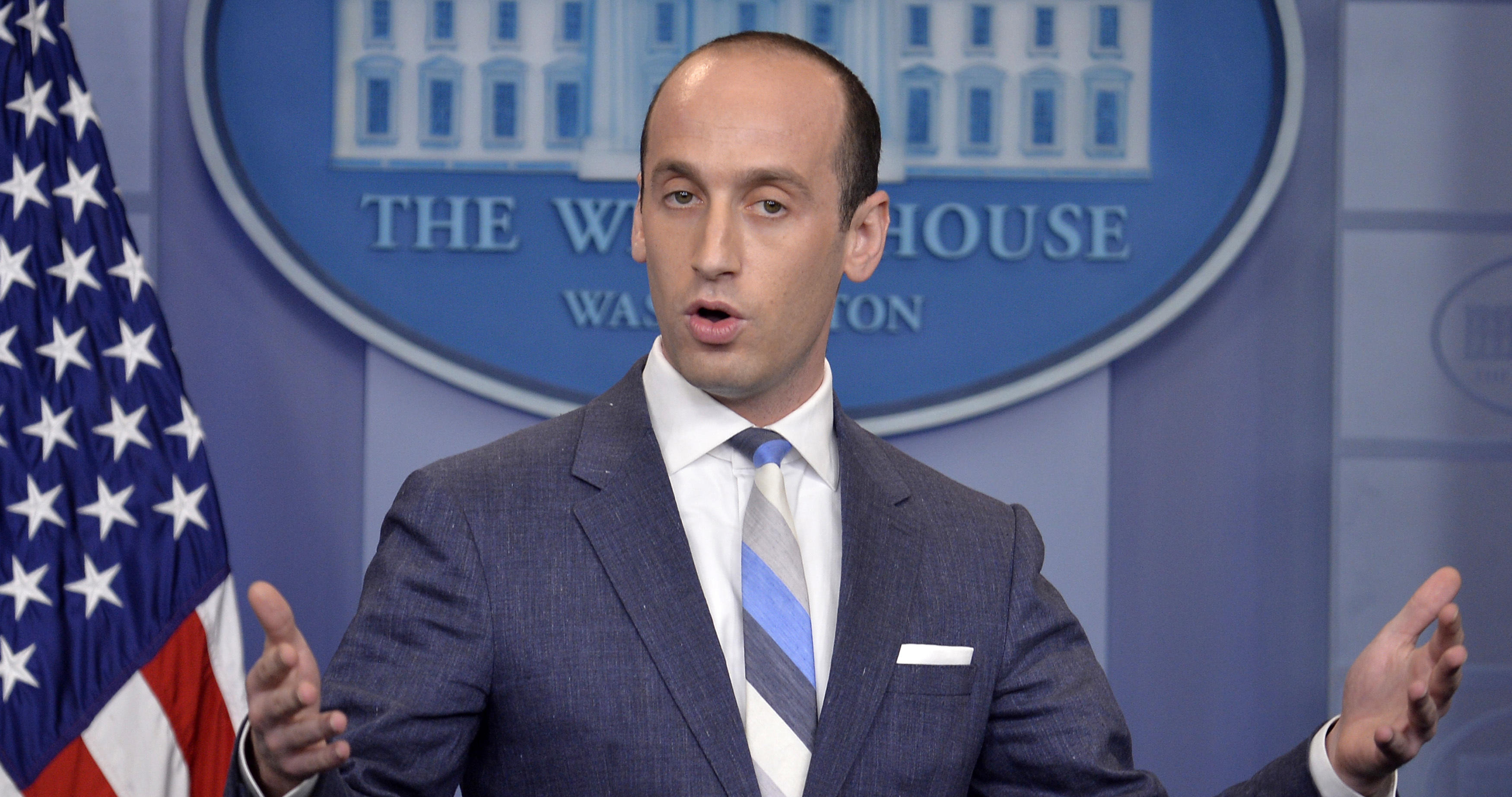 In the email to McHugh, Miller brought up the novel in the context of Pope Francis’ sympathetic rhetoric about refugees. McHugh didn’t write a story on the idea then, but another Breitbart writer did. Julia Hahn, now a Trump aide in the White House, wrote a story that appeared on Sept. 24, 2015, headlined “‘Camp of the Saints’ Seen Mirrored in Pope’s Message.’” The article appeared 18 days after Miller recommended Breitbart run a story on the same theme.

Miller frequently emailed both Hahn and McHugh in the material acquired by Hatewatch. One email sent by Miller to Hahn and others on April 2, 2015, shows him accepting an invitation for the group to have drinks together.

Hahn, April 1, 2015, 9:03 p.m. ET : “Hey! I was just talking to katie [McHugh] abt tmrw nights plans and since I just moved into the city two days ago, I wanted to have an open house. Wd love to have you all over tomorrow to celebrate my no longer living in the boondocks! Drinks are on me! (my new place is at [REDACTED]). Let me know if u guys can make it!”

The Intercept cited Hahn’s story on “The Camp of the Saints”  as a prime example of her extremist tendencies in a May 2017 profile called “Birth of a Radical.”

“The Camp of the Saints” was considered obscure at the time Miller cited it, but the book was already famous among white nationalists and other far-right extremists.

John Tanton, the father of the modern anti-immigration movement and founder of hate groups such as the Federation for American Immigration Reform and the Center for Immigration Studies, called the book “20 years ahead of its time” as he promoted the Social Contract Press’ publication of it in the mid-‘90s. He explained he saw it as a way to counter the effect of books that described the immigrant experience in positive terms:

“Over the years the American public has absorbed a great number of books, articles, poems and films which exalt the immigrant experience. It is easy for the feelings evoked by Ellis Island and the Statue of Liberty to obscure the fact that we are currently receiving too many immigrants (and receiving them too fast) for the health of our environment and of our common culture. Raspail evokes different feelings and that may help to pave the way for policy changes.”

Tanton also suggested that an ongoing “racial and ethnic transformation of the U.S.” was frightening.

“All this could keep you awake at night,” he wrote.

“Fiction can be more powerful than fact. Authors have always lent their talents to causes, often swaying events more effectively than journalists or politicians. Fiction, including virtually everything emitted by Hollywood, has usually been in the service of the left, but occasionally an author declares his allegiance to culture and tradition.

“In ‘The Camp of the Saints,’ Jean Raspail goes further and declares his allegiance to his race – though it is an allegiance tinged with bitterness at the weakness of the white man.” 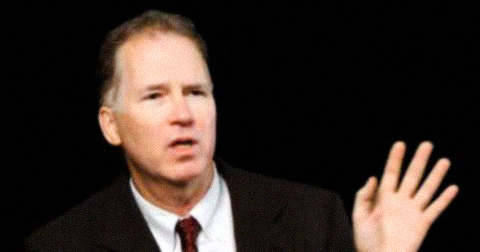 Steve Sailer authored many pieces on "The Camp of the Saints" for the white nationalist website VDARE. (Screenshot from YouTube)

The white nationalist website VDARE even created a searchable tag called “Camp of the Saints,” which highlights stories about nonwhite immigration, repeatedly painting it in a negative light. At the time Miller flagged the book to Breitbart in early September 2015, VDARE had run more than 50 posts under the “Camp of the Saints” tagline.

Steve Sailer wrote many of VDARE’s posts referring to “The Camp of the Saints,” a review of the tag shows. Sailer authored a VDARE post Miller shared with Breitbart on Oct. 23, 2015, about temporary protected status for refugees, according to Hatewatch’s reporting.

Sailer also did a VDARE piece titled “Non-White Immigration Madness Predicted in French Novel ‘Camp of the Saints’ ” in July 2014, which ran on the neo-Nazi website Daily Stormer as well.

He wrote a post on VDARE about Pope Francis’ willingness to shelter two refugee families at the Vatican under the “Camp of the Saints” tag on the same day that Miller recommended the story citing the pope to Breitbart. VDARE had published a similar post called “Vatican Catholics Tell Italians to Pipe Down about Illegal Alien Invasion” under the same tag less than a month before Miller sent his email to Breitbart.

Neo-Nazis have also promoted “The Camp of the Saints.” Joseph Jordan, who writes for extremist websites under the byline “Eric Striker,” compared the book to “The Turner Diaries.” That book by William Luther Pierce reportedly played a role in influencing bomber Timothy McVeigh, who killed 168 people in Oklahoma City in 1995.

Jordan suggested in a March 7, 2017, Daily Stormer story that the only difference between the two books was “The Turner Diaries” naming Jews as an enemy of whites.

“ ‘Camp of the Saints’ is only slightly more sophisticated than ‘The Turner Diaries,’ yet the former is circulated in mainstream conservative circles while the latter is not,” Jordan wrote, referring to the controversy then surrounding Bannon.

“Aside from the cartoony violence of William Pierce’s novel, the only key factor that separates the two is ‘Camp of the Saints’ names every single group and race except the Jew.”