Larry Klayman made his name as an ultra-litigious, political gadfly who filed numerous cases against President Bill Clinton in the 1990s and then pursued debunked conspiracy theories about President Barack Obama’s birthplace.

Over the years, he has built a following among antigovernment extremists and conspiracy theorists, some of whom he has defended in court.

Klayman, 68, is once again back in the spotlight. He’s representing George Zimmerman in a lawsuit filed this week in Polk County, Florida, against the family of Trayvon Martin and others, alleging his client was defamed and subjected to “malicious prosecution.” 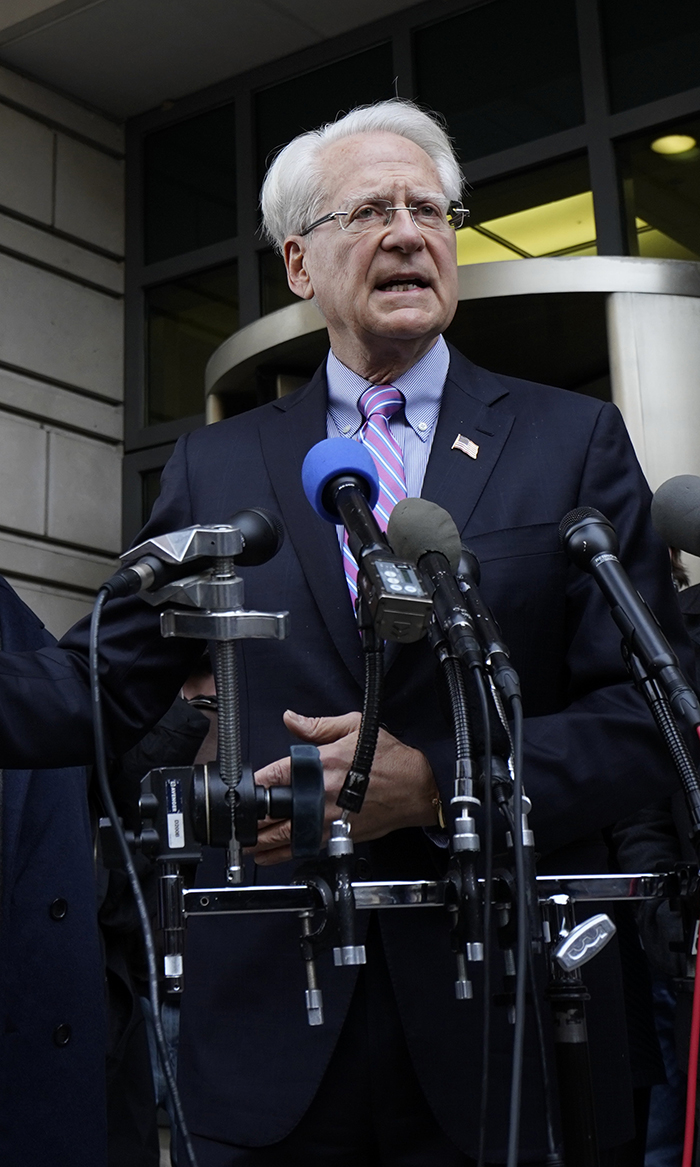 Larry Klayman speaks during a January news conference outside the federal courthouse in Washington. (Photo via AP Images/Sait Serkan Gurbuz)

Acting as a neighborhood watchman in a gated community in Sanford, Florida, Zimmerman shot and killed Martin, an unarmed black teenager, in 2012. He claimed he was acting in self-defense, and a jury acquitted him the following year of second-degree murder and manslaughter charges. The shooting and acquittal sparked a national debate about racial profiling, Florida’s “stand your ground” statute and gun laws. The case also drew strong reactions from extremists of all stripes.

Zimmerman’s lawsuit names Martin’s mother, Sybrina Fulton; his father, Tracy Martin; and the family’s attorney, Benjamin Crump, who published a book this year titled “Open Season: Legalized Genocide of Colored People,” as defendants. It also names the book publisher, HarperCollins Publishers, members of the prosecution team in the Martin case, the state of Florida and the Florida Department of Law Enforcement.

In the suit, which seeks $100 million in damages, Zimmerman alleges a witness against him misrepresented herself and that Crump and Martin’s family knew about it.

The allegations are based on a film and book by conspiracy theorist Joel Gilbert, who once directed a film questioning Obama’s parentage.

Gilbert is a frequent guest on Infowars and sometimes a fill-in for host Alex Jones, the conspiracy theorist who once claimed the 2012 massacre at Sandy Hook Elementary School was a hoax. During one such stint, Gilbert interviewed Klayman about Robert Mueller’s investigation into Russian interference in the 2016 presidential election.

Klayman also presided over a “citizens grand jury” this year, an event hosted by Freedom Watch. In a June 27 press release, the gathering announced “the criminal indictment” of Mueller after hearing the testimony of former WorldNetDaily columnist Jerome Corsi.

Klayman did not return emails with questions about his reliance on Gilbert’s work in the Zimmerman suit or whether he researched the claims made by the director.

Klayman, founder of the group Judicial Watch, represents antigovernment activist Ryan Bundy and sought to serve as an attorney for his father, Cliven Bundy. The Bundy family attained hero status within the antigovernment movement after a 2014 standoff with federal agents in Nevada (a dispute stemming from the elder Bundy’s refusal to pay federal grazing fees) and the 2016 seizure and occupation of a federal building at Malheur National Wildlife Refuge in Oregon.

Klayman pushed the conspiracy theory that the “deep state” efforts to hold the Bundys accountable were an attempt to get retribution for racist remarks that Cliven Bundy made to The New York Times.

A judge in Nevada rejected Klayman’s bid to serve as the elder Bundy’s attorney in a case stemming from the Nevada standoff. An appeals court upheld the decision.

“Klayman has made misrepresentations and omissions to the district court regarding the ethics proceedings before the District of Columbia Bar; he has shown a pattern of disregard for local rules, ethics, and decorum; and he has demonstrated a lack of respect for the judicial process by suing the district judge personally,” Judge Jay Bybee of the 9th U.S. Circuit Court of Appeals wrote on Oct. 28, 2016.

Klayman is also the organizer of a group called Reclaim America Now Coalition, which pitches itself as “The Beginning of the Peaceful, Nonviolent Second American Revolution.”

The group includes a number of far-right extremists. Along with Klayman, members include Pamela Geller, an anti-Muslim activist who rose to prominence fighting a mosque near ground zero in New York; former Graham County, Arizona, Sheriff Richard Mack, who runs the Constitutional Sheriffs and Peace Officers Association, a radical group that claims county sheriffs are the highest law enforcement officials in the nation; and Brad Dacus, founder of the Pacific Justice Institute, an anti-LGBT hate group that once compared same-sex marriage to Adolf Hitler and the Nazis’ rise in Germany.