Attorney General Gurbir Grewal told reporters that David N. Anderson, 47, and Francine Graham, 50, showed interest in the Black Hebrew Israelite (BHI) movement, but authorities haven’t determined whether they had a direct link to any BHI groups.

“There has been considerable reporting that these two suspects are linked to the Black Hebrew Israelite movement,” he said. “We have evidence that both suspects expressed interest in this group. But we have not definitively established any formal links to that organization or to any other group. Based on the available evidence, we believe the shooters were acting on their own.” 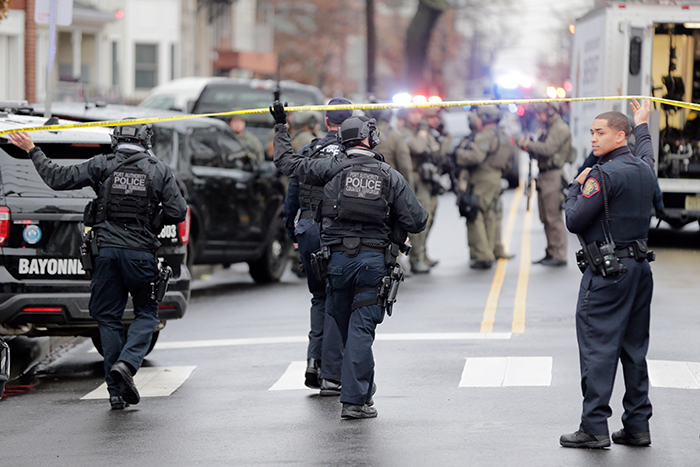 The New York Times reported Wednesday that at least one suspect had involvement with the Black Hebrew Israelite movement.

The movement is based on a black separatist theology dating to the 19th century that preaches people of color are the true children of God. Although many Hebrew Israelites are neither explicitly anti-white nor antisemitic and do not advocate violence, there is a rising extremist sector within the movement.

The Southern Poverty Law Center currently lists 144 Black Hebrew Israelite organizations as black separatist hate groups because of their antisemitic and anti-white beliefs. According to research by the SPLC’s Intelligence Project, anti-law enforcement sentiment is not a core tenet of the Black Hebrew Israelite ideology.

The extent of the suspects’ connection to the BHI movement remains unclear. Anderson published antisemitic posts online, The New York Times reported, citing an unnamed law enforcement official familiar with the case. The official did not say where the information was published or provide any additional specifics, according to the Times. The Times also reported that a manifesto-style note was found.

But Grewal disputed that notion. “The ‘manifesto’ is a word that the media is using,” he said. “We have not discovered anything that we would characterize as a manifesto.”

The BHI hate groups listed by the SPLC believe in ideas of black supremacy and bigotry against Caucasians, Jews and members of the LGBTQ community. They believe that, as members of the 12 Tribes of Israel – consisting only of African Americans, Hispanics and Native Americans – they are God’s “chosen people.” Jews are considered “imposters.” Caucasians and members of the LGBTQ community are deemed “devils.” Extreme Black Hebrew Israelites believe that individuals outside the movement are deserving of slavery or death. The most numerous of the BHI groups in the United States are under the banners of Israel United in Christ, the Israelite School of Universal Practical Knowledge and Great Millstone.

On Tuesday, six people, including two suspects, died in Jersey City. The two suspects shot and killed a police officer outside a cemetery before driving to the nearby JC Kosher Supermarket, reports say. Armed with long rifles, the pair got out of their vehicle and began firing inside the market. By the time the carnage was over, five people were dead there – three civilians and the two shooters. One other person in the store was wounded.

“Instances such as Tuesday’s attacks in Jersey City that left two suspects and four victims dead, including one police officer, have become tragically too common,” Karen Baynes-Dunning, the SPLC’s interim president, said in a statement. “The ever-increasing number of public acts of violence are designed to strike terror into the hearts of nearly every American.

“In these moments, it’s important to remember the victims. Let us remember the lives lost – adding more names to the growing list of those taken by violence and hate. Our hearts go out to the families of the victims and everyone impacted by this horrific event.

“In the wake of yet another public act of violence, we can only hope that the current administration begins to take these threats seriously and devote the necessary resources to begin addressing domestic terrorism and hate in our country.”

The Jersey City shooting becomes the latest suspected antisemitic attack in the United States. The Anti-Defamation League reported in October that at least a dozen white supremacists have been arrested in antisemitic plots and that Jewish institutions’ property has been targeted some 50 times since the Tree of Life synagogue massacre a year earlier.

Eleven worshippers were shot to death on Oct. 27, 2018, at the Tree of Life in Pittsburgh. Robert Bowers has been charged with several dozen counts, including federal hate crimes and firearms offenses.

In another rampage, a gunman killed one and injured three others at the Chabad of Poway synagogue on April 27 in Poway, California. A federal search warrant alleges the suspect, John T. Earnest, said he hated Judaism and was inspired by Hitler, according to The Associated Press. Earnest, who faces several charges including murder, is scheduled to go to trial June 2.

In addition to those high-profile cases, there have been a number of other developments in which authorities have stopped possible attacks:

Incidents of intimidation also continue throughout the country. For example, one Ohio neighborhood found antisemitic literature earlier this year at a library station. Flyers claiming “Jews Attack 1st Amendment” showed up in February in the University of Montana area. And in separate incidents in Massachusetts, flyers with offensive caricatures of Jewish men were distributed in January in Newton, and those denying the Holocaust were left in July at a synagogue in Marblehead.